Minos Beach Art Hotel on Crete is a glamorous old-school escape. Andria Mitsakos, a Greek girl living in Italy, decamps for the summer.

AGIOS NIKOLAOS, Crete — When I was living in Milan last July, I wanted to get out of the city on the weekend, as do all Milanese. I was hooked on dashing off to any Greek island that Aegean Airlines flew to, so when I found a great non-stop to Heraklion, Crete, I booked immediately. I had heard about the small port town of Agios Nikolaos on the northeastern part of the island and became obsessed when a friend told me about the old-school glamour that awaited at Minos Beach Art Hotel.

The lively resort town affectionately known as Ag Nik has come a long way since the early 20th century when 95 inhabitants were listed on its electoral roll. Today, it's one of the island's most popular holiday hotspots. Still, it's managed to retain its relaxed, small-town atmosphere. It's also gorgeously picturesque with oodles of Greek charm.

Built in 1961 as the first resort in Ag Nik, Minos Beach Art Hotel was the ideal backdrop for the caftan-heavy wardrobe tossed into my carry-on. Movie set-worthy scenery paired well with the baptismal Aegean. The hotel played host to 1960s names like Walt Disney (who stayed here while filming The Moon-Spinners), and Jeanne Moreau. I fully expected to find Serge Gainsbourg smoking at the bar each evening. Exactly my scene. I channeled my inner Jane Birkin and decided to make this spot my own. 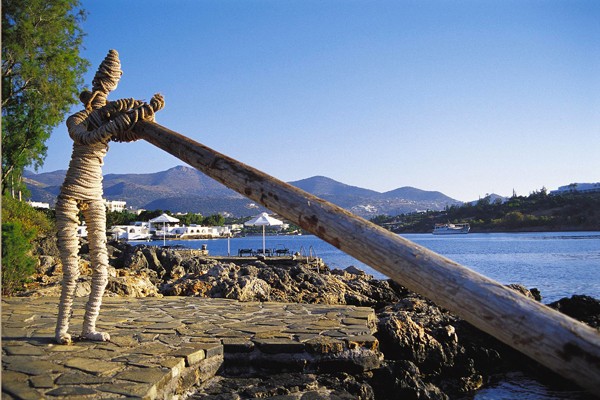 The Mamidakis family, the owners of Minos Beach, are huge art enthusiasts, and the hotel is a living museum. The outdoor sculpture garden brims with 45 works from major Greek and foreign artists. The hotel architecture was inspired by the traditional fishing villages of eastern Crete, and one-storey, whitewashed bungalows and villas give you the opportunity to plunge straight into the sea, which I did on a daily basis. 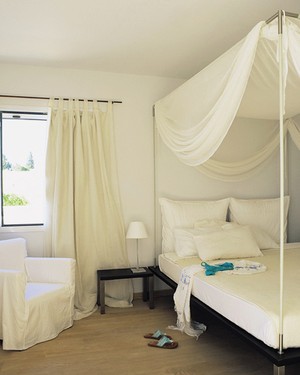 The property is set on a spit of land overlooking Mirabello Bay, surrounding gardens that keep accommodations super private. On most days, I lounged by my private pool, ate horitaki salata (true, Greek village salad) and grilled fish, and indulged in a gorgeous massage at the Ananea Spa. Next day, repeat.

Come evening, I dined at La Bouillabaisse, the hotel's oceanfront French restaurant, then ventured into town. Ag Nik is built around a so-called bottomless lake, which is linked to the sea by a narrow canal. The area around the lake is the most happening part of town, with vibrant cafes, restaurants, and bars bustling with chatter and bouzouki music.

Walking through the small town at night was, well, comical. At a store that sold amazing olive oil skincare products, the salesgirl said to me, "You New York women are so modern! Just like we see on TV." I cringed a little, though I suppose her obvious global shorthand reference to Sex and the City was understandable since I had just told her that, yes, I am Greek (well, Greek-American). No, I don't speak Greek. No, I'm not married. No, I don't have any children. Yes, I actually enjoy traveling by myself. 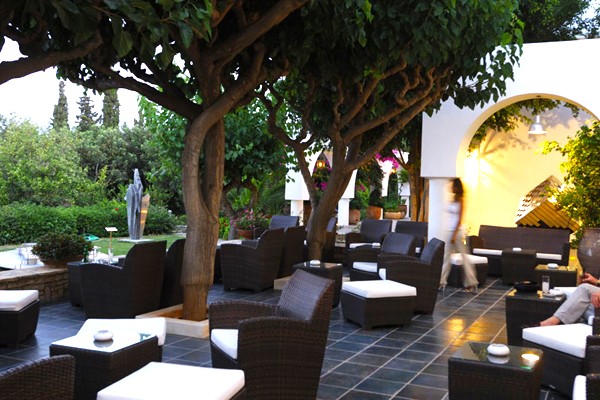 Olive oil facial mask in hand, I padded my way back to the hotel for a nightcap at the Dionyssos Bar. I sipped an ouzo while the barman, who had worked there for more than 30 years, shared story upon story. A striking Greek boy in his mid-20s joined in, and we all chatted late into the evening. Not Serge as I had envisioned, but I managed a perfectly channeled Jane nonetheless.