NEW YORK CITY – When I signed on to be an American Express Platinum for a Year Ambassador, I figured the one benefit I would never use would be their concierge services. As the founder of Fathom, I'm already my own concierge. (Really, if you want to start a business, start with something you’re good at.)

But I like a challenge, so a month ago I called the Platinum Card Concierge with a simple mission: Please plan an amazing night for me and my husband in New York City. Dinner, theater, hotel. Simple pleasures, in other words. Oh, and do this for the day after tomorrow. (Planning ahead: not my forte.)

Ring. Ring. "Welcome to American Express Concierge Services. This is Tori. How may I help you?”

And we're off to the first order of business: theater tickets to Hamilton. It's the hottest show running on Broadway right now and I know it's totally sold out for months. Still, I'm curious if AmEx can do anything. Tori tells me she can get me tickets for the show through a broker, which strikes me as nothing short of miraculous, but the price tag would be about what a round-trip ticket to Tokyo would cost, and I don’t need to see guys in colonial wigs that badly.

She easily scores my second choice, Tony award-winner The Curious Incident of the Dog in the Night-Time. Tori reads me the plot summary and warns that the play — about a troubled autistic teenage boy who is a mathematical genius — may not be for everyone. I decide it sounds great anyway. She weighs the pros and cons of the best seating options, showing remarkable knowledge about the options of the Ethel Barrymore Theater. (Human beings: so much better than a tiny seating chart on an iPhone.) Tori tells me about the American Express Preferred Seating program for cultural and sporting events and checks if any are available. Unfortunately, because preferred seats for Curious Incident went on sale last winter, we can't find any for this week. (Some people may know in February where they're going to be in October, but some people are not me.) I settle for two seats on the aisle in row L and move on to dinner.

Tori tells me the play runs two and a half hours, so we decide to book an early bird table before the show. For me, picking a restaurant in New York City is a sport like picking horses is for gamblers who love the ponies: an expensive habit with potentially rich payoffs. American Express has a Platinum Dining Program, wherein 1,000 select restaurants around the world hold one table per night for Platinum Card Members. The restaurant options in midtown Manhattan include favorites like Esca, Estatoria Milos, Le Bernardin, and Petrossian, but I've missed a few amazing openings in the past few years, so I request are the culinary equivalent of Hamilton: Betony and Cosme. Tori puts me on hold to check with an AmEx dining specialist. American Express has a special reservation number for Betony, but they'll have to call in the morning and get back to me.

Do I need a ride home from the theater, she asks. I'm temped, but I'm only taking a quick cross-town trip, so I'll take an Uber instead and bank 2x the Membership Rewards points (another member perk).

Last item on the agenda: a hotel for the night. Tori transfers me to Kai in the Platinum Travel Service department. We review the many NYC options in the AmEx Fine Hotels and Resorts program. A classic king at the new Baccarat Hotel (the Hamilton of hotels — can you see the theme of the night?) costs $900. To which I have to say, really, Baccarat? Who are you kidding? I consider two high-quality classics instead: the Carlyle on the Upper East Side for $495 and the Greenwich in Tribeca for $575. I'm swayed by the $100 FH&R spa credit at both, because a facial sounds like a nice perk, and settle on the Greenwich because I’m a downtown girl and the hotel has a pool in the basement. A pool. 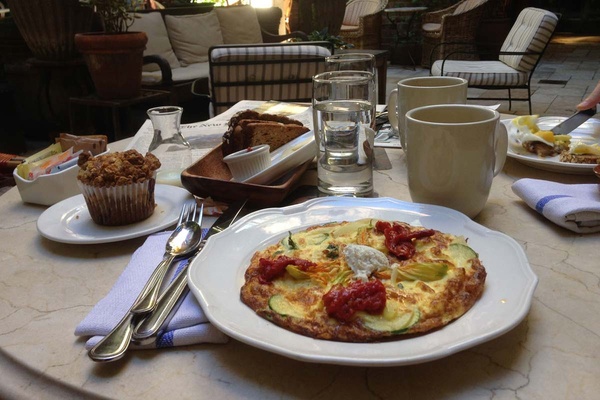 Nothing beats a perfect hotel breakfast, in this case at The Greenwich Hotel. Photo by Pavia Rosati.

Before 10 a.m. the following morning, I receive emails confirming everything: the theater, the hotel, and — score! — dinner at Betony.

Date night arrives. Betony is totally incredible. The Curious Incident of the Dog in the Night-Time totally isn't. The food at Betony is dazzling and delicious. Chef Bryce Shuman is taking his Eleven Madison Park training to new heights in a space that befits the rich and luxurious surroundings and the soaring ceiling. I can’t wait to go back.

The Greenwich Hotel is even better than I could have expected. So much so that I spend the whole next day in the spa, the pool, in the guest-only outdoor dining room, in the library, and at hotel restaurant Locanda Verde, taking full advantage of my AmEx Platinum perks — dining and spa credits and impossibly late check-out. You can read more about my experience at the hotel here.

I think I'll have to do this again soon. Imagine what Concierge Services can do with two weeks' notice.

Here's a rundown of all the benefits of the American Express Platinum Card.