The First Soccer Game is a rite of passage for every Italian parent and child. Erica Firpo schools her daughter in the sacred sport.

ROME – There comes a time in every (Roman) child's life when a parent must have The Talk. A long and meaningful conversation about one's place in the world, and how that world's epicenter is the Stadio Olimpico, Rome's field of dreams.

In a soft voice, the conversation begins with color, a poignant preamble about the beauty of orange and red, with a casual mention of a slight disdain for boring baby blue. Heads nod in agreement as The Talk turns into A Dramatic Narrative — the rags-to-riches story of a young boy with a golden foot, and how that foot has traversed field after field and adversary after adversary to win the scudetti badges bestowed to series victors as well as hearts across the world. There is a reverent pause in homage to that young boy, who is now the captain of his hometown team, that incredible team known simply as AS Roma — city champions, underdogs, fighters.

Promises are made to always believe — through rain and shine, good and bad — that Roma is the best team in the world, a team that will always love you and never leave you. And to never, ever, ever root for their blue cross-town rivals, Lazio*. When the Roma scarf is gently wrapped around the child's neck, the rite of passage has been completed.

Shit. My seven-year-old has asked me the one question I had hoped and prayed never to hear. Mommy, when are we going to the stadium?

To be clear, I love calcio, the sport Americas call soccer. I love watching the World Cup and always get a front row seat in Campo de' Fiori during the Euros. I marched through the streets of Rome to celebrate the 2006 World Cup win. My beloved and worn-out Italia jersey is 15 years old, and I still wear it for every game the Italian national team — the Azurri — plays. And I have no stadium fears. In fact, I put in a lot of quality time in the tribuna (the best seats in the house at any stadium) during the 2005-2006 season, albeit begrudgingly, because my then-boyfriend was a historic (and histrionic) Laziale (Lazio fan). 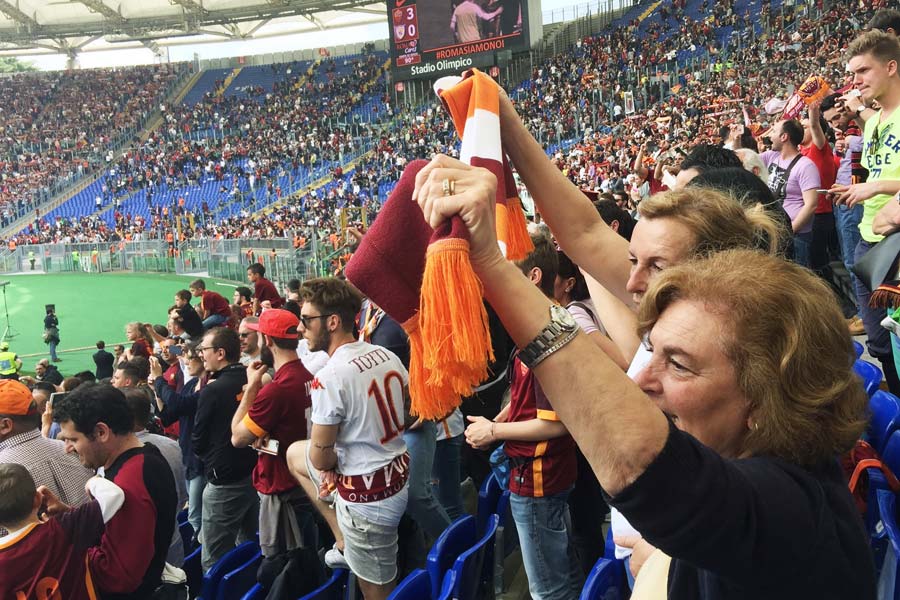 These grandmas know the score.

I have pretty good idea of how (and when) to take a child to a game. I didn't want to hear that question because I love Juventus, the Turin team from the north.

I blame school and her older sister for creating this die-hard Romanista. In first grade, she started collecting figurini, the Panini Serie A album with adhesive players card stickers. By second grade when she only wanted Roma players, the collectibles weren't enough. She wanted to see a real game.

As any good mother would do, I sucked it up and got tickets to the Stadio for a Mother's Day game — the ultimate symbol of maternal sacrifice. With deliberate reason: In my opinion, every true fan should have at least one chance to see their favorite player on the home pitch. In her case, it was Mr. Golden Foot himself, Francesco Totti, who, at almost 40 years old, was not guaranteed to return for the 2016-2017 season**.

Yes, I had been warned about taking a seven-year-old to the stadium. It's dangerous! The fans are crazy! Yes, I was aware that we were two females alone, and only one of us old enough to legally drive a car. It's a den of testosterone! The fans are crazy! 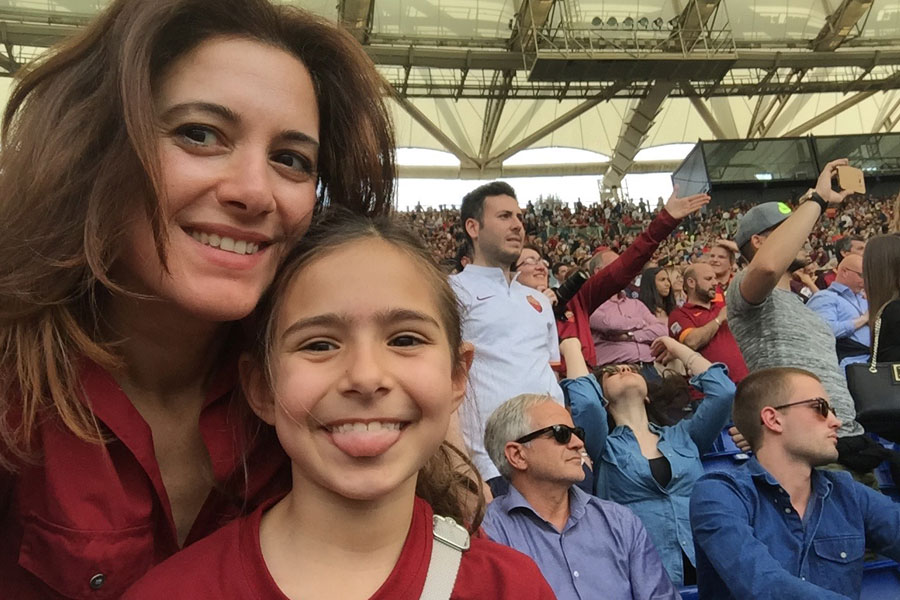 A superfan in the making.

So I made sure we did it right. A few days before the game, we headed to the official AS Roma store in our neighborhood to pick out a tuta (an official team outfit of shirt and pants), in spite of having been told there was nothing for women. We also bought a sciarpa, a silky, long neck scarf emblazoned with SPQR and AS ROMA in big letters, to accent my conveniently Roma red blouse. We looked the part and easily blended in with the seas of orange and red as we walked around the stadium grounds.

Once in the stadium, all we had to do was find our seats — a breeze, as ticket holders are only allowed access to their assigned seating section. I made sure to purchase seats in the mid-field Tribuna Monte Mario section, the one for dedicated Roma fans, and not the crazy Romanisti seats. The vibe in the tribuna is considered calm (okay, it is for a football match), making it the best place to sit with children. On our left was a father-and-son combo (one of the many; there were not so many daughters), also on a first-time-at-the-stadium, rite-of-passage game. On our right were a pair of nonne, experienced Romanista grandmothers who led all the cheers in our section. Knowing that the snack bar lines would be crazy long (and who wants to wait for bad snacks when the ball is in play?), we brought our own panini and purchased a cold drink of the stadium vendors. Effortless.

The experience was amazing. Roma dominated the game. Totti waved to us. De Rossi was as fine as he always is (the players are the best part of the game). My seven-year-old told me I was the best mamma in the history of all mothers. And I actually teared up while singing hard to Venditti's Roma Roma Roma.

When we returned home, I promised her more games for 2016-2017, and she told me it was okay if we went to the next Roma-Juve game. Together we set up a small altar to AS Roma, Totti, and his wife Ilary in a corner of her bedroom. That night, she made a wish that Er Bambino, the Golden Foot, would last just one more season so that we could have another Best Day Ever.

*That other team in Rome.

**If there is any reason to go to a Roma game, it is Francesco Totti. The Roma captain is still playing his heart out. If you're in Rome this season, make time to catch him in a game, because while it's unclear when he will retire, it's expected to be May.