Drinking in Paris is not just about wine. Ask an industry professional what the most exciting drink in town is and they'll point you toward a cocktail. Ask Natasha Torres, head bartender at Narcbar in NYC's The Standard, East Village, about her favorite drinking city, and she'll direct you to the best cocktail bars in Paris.

PARIS – The first time I went to Paris was in college, and while I wasn't as into the cocktail scene then, I was inescapably drawn to the city. Years later, after becoming a bartender, I went back for vacation with some industry friends to bartend at a peer's Fashion Week party. We explored the bar scene with a Parisian friend who took us to all her favorite spots. Paris began taking mixed drinks seriously around 2007, when a handful of men calling themselves the Experimental Group launched the Experiment Cocktail Club. Since then, bar by bar, Paris — Montmartre and Pigalle especially — has proved to be a welcoming place for lovers of elevated mixed drinks. It has since become my favorite place to imbibe.

Dirty Dick
10 Rue Frochot; +33-1-48-78-74-58
The South Pigalle watering hole caters to my soft spot for tiki bars. Think bartenders decked out in flower shirts and drinks served in kitschy glassware shaped like shells and volcanoes. Dirty Dicks actually used to be hostess bar (see: the name) and is incredibly playful. It's a good spot to hit up if you're looking for a fun scene with folks that don't take themselves too seriously.

Le Glass
7 Rue Frochot; +33-9-80-72-98-83
This place is known for flying over specialties from the U.S. to mimic the offerings of an American bar, going so far as to serve hot dogs and pickles. The atmosphere is convival and laid-back; the drinks — like Ticket de Metro (Olmeca Altos tequila blanco, Campari, thyme honey, mint, lemon, and blonde ale) — are high-quality and unpretentious. 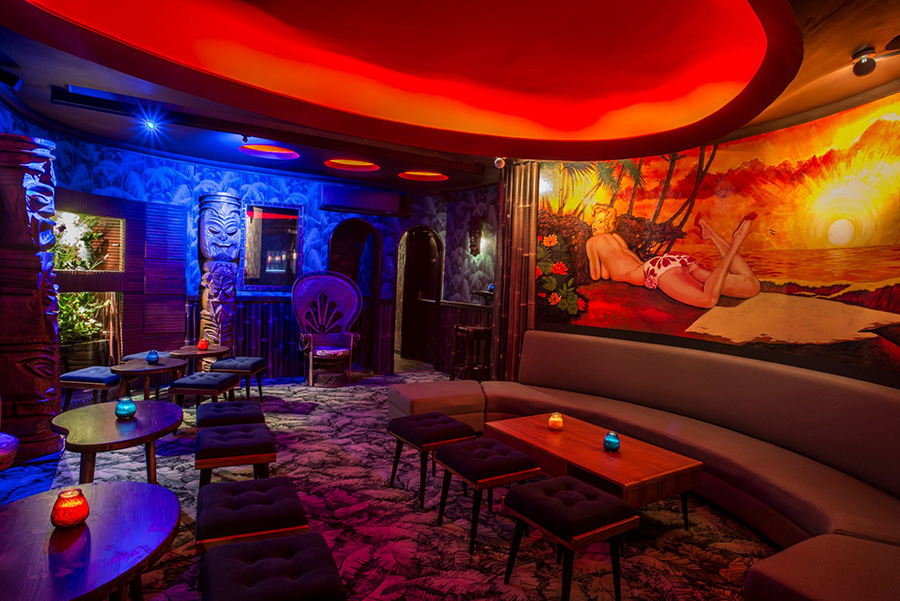 This looks like a cool cocktail scene. Photo courtesy of Dirty Dick. 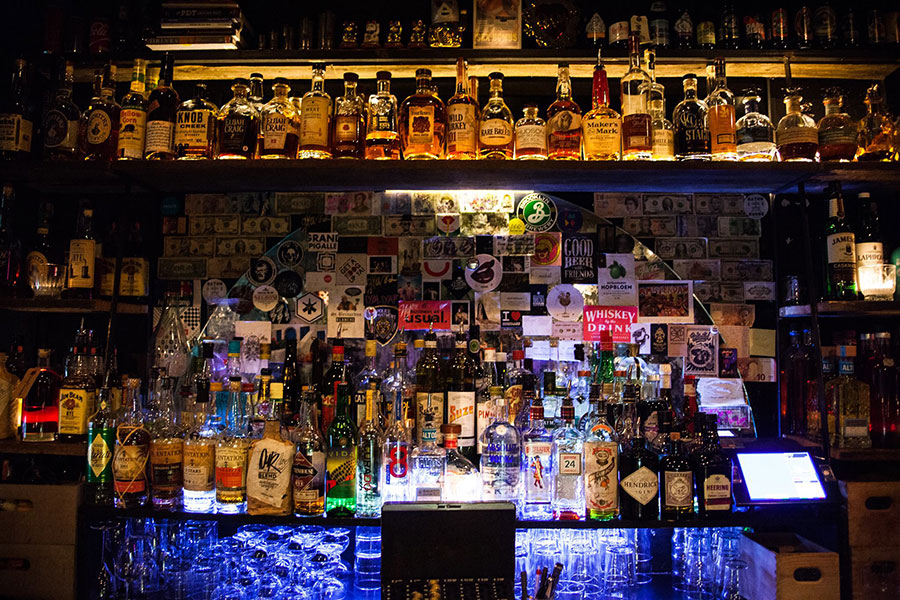 Le Mary Celeste
1 Rue Commines; +33-1-42-77-98-37
It's rare to find a cocktail bar where the quality of food matches the level of the drinks list. Le Mary Celeste, which is known for its serious selection of small plates, is an appealing exception. Enjoy a decadent vegetable dish while sipping on a top-notch cocktail, like the appropriately named Springtime Lunch (Plantation Rum Original Dark, crème de cacao, lemon, and Brooklyn IPA).

Candelaria
52 Rue de Saintonge; +33-1-42-74-41-28
Frequently considered one of the world's best, the secret lounge is accessible through an unmarked door in the back of an unsuspecting taco shop, which serves some of the best traditional Mexican food in the city (a feat in itself). The cocktail menu pays homage to pre-Columbian Latin America with exceptional concotions like bourbon with fernet, passion fruit mousse, and orange bitters (Colombia) and hazelnut-butter-infused cachaça with lime, falernum, and barbecue syrup (Brazil).

Little Red Door
60 Rue Charlot; +33-1-42-71-19-32
One of the first cocktail bars to make a name for itself in Paris, Little Red Door not only has amazing drinks but really beautiful, cozy, and comforting interiors. Accessible through — well, you guessed it — a little red door, this spot doesn't keep an extensive menu and is prime for interacting with the bartenders to have them craft a custom drink that suits your style. The staff is friendly and on top of their game. It's an exploration of flavors and tastes ... through alcohol.

Le Baton Rouge
62 Rue Notre Dame de Lorette; +33-6-52-90-36-42
Pigalle once again proves that what was once a less-than-ideal part of town has become a boon for the Parisian cocktail scene. If you didn't get enough of New Orleans in the U.S., swing by this themed bar in Paris to get your fix. Very closely mirroring, if not exaggerating, what is found in the American South (such as finely made Sazerac), the destination is a relief from the seriousness for which Paris is sometimes known. Check out the quirky decor (voodoo hoodoo, skulls on sticks), snack on Southern-stye plates, and sip on punches and other thematically apropos beverages. 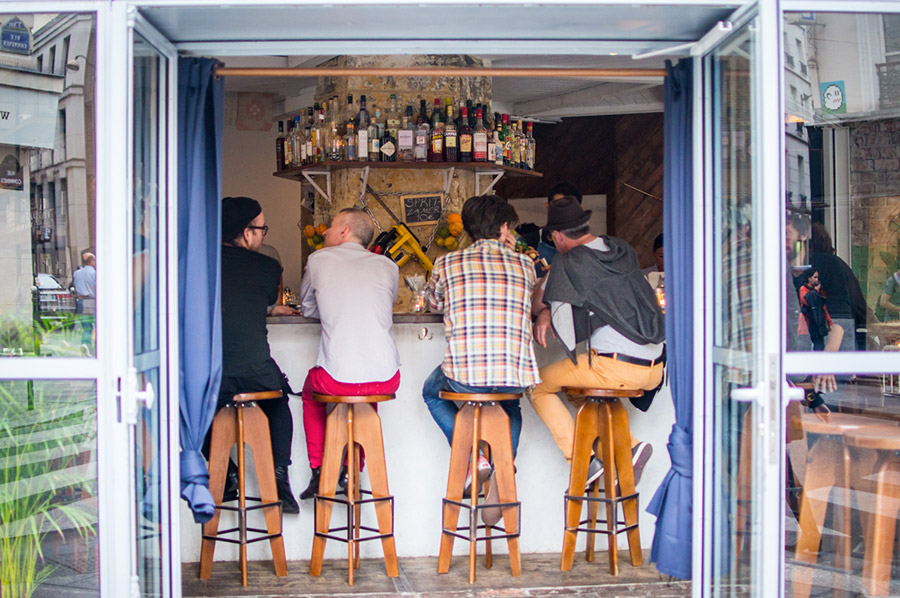 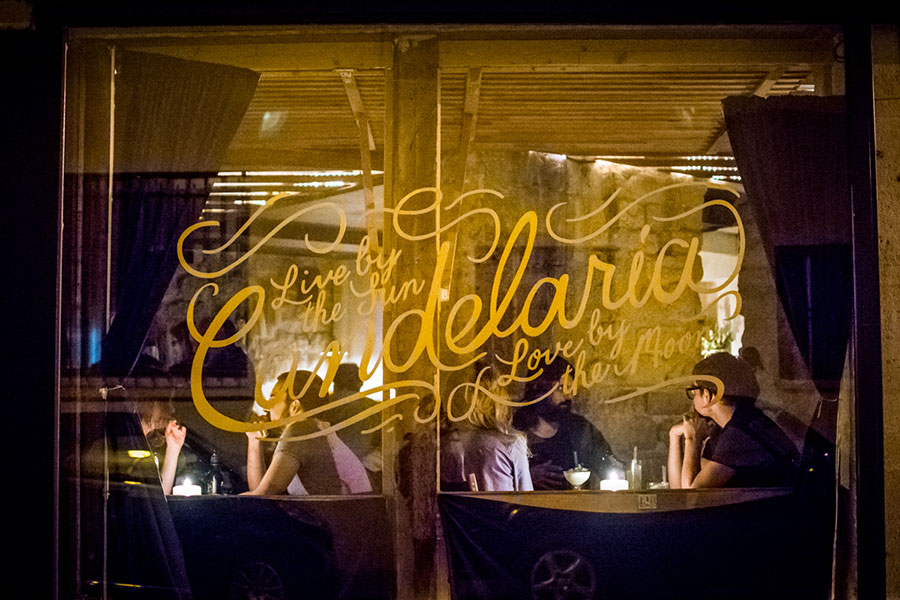 La Syndicat
51 Rue du Faubourg Saint-Denis; +33-6-66-63-57-60
I love this bar for an "authentic" French experience because it stocks only French spirits. The team does an amazing job of putting inventive spins on traditional cocktails, like the rose julep (whiskey, vanilla rose syrup, house absinthe), which adds a bit of national flair to the menu.

Epicerie de Longueil
28 Avenue de Longueil; +33-1-39-62-00-50
A must-see destination if you're looking to craft your own cocktails. It's stocked with a impressive list of spices and ingredients (250+ kinds of honeys and jams, 200+ types of spices, 120+ varieties of teas) that set it apart from other shops of the sort. Open since 1880, it is a window into the city's past.

Experimental Cocktail Club
37 Rue Saint-Sauveur; +33-1-45-08-88-09
No cocktail bar list would be complete without this spot, responsible for the elevation of the cocktail scene in Paris. It's expensive and the decor is indulgent and upscale — which makes it a great date spot if that's your jam. While here, engage with the bartending team to, well, experiment. The best part about this place is how inventive they are with their drinks. Take advantage of it.

Pastry Chef's Paris: A Guide for the Bake Goods and Restaurants
The Chic Restaurateur's Paris Guide
Fathoms Guide to Paris