Noteworthy enotecas, osterias, and wine bars may be a dime a dozen in Italy, but every town has its standouts. Renaissance historian Chandi Wyant shares her favorite spots in Lecce, the beautiful capital of Puglia in southern Italy.

LECCE – There's a lot of buzz about the region of Puglia right now. For good reason, from the food and the hotels to the people and the cities. Notably Lecce, a town carved from limestone so soft, a butter knife could sculpt buildings into a Baroque fantasy. Which is what 17th-century craftsmen did in the historic center. (Though probably with a chisel, not a butter knife. That was best saved for the desserts.) 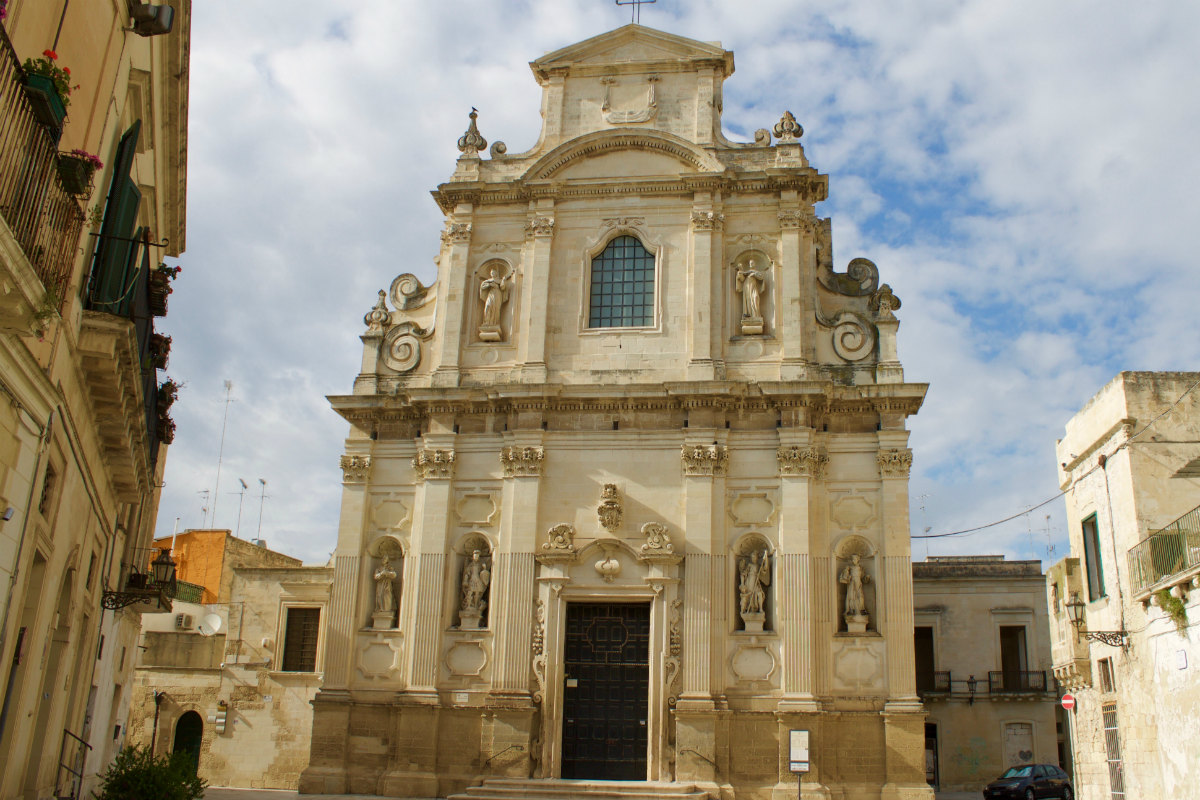 I found the honey color of the buildings mesmerizing, particularly when I was wandering near-empty streets on a sunny afternoon during siesta. The warmth of the stone is as tempting as pasticciotto, the golden custard-filled pastry that is Lecce's specialty.

For most travelers in Italy, where to eat is a critical question. After eating my way through Lecce for three weeks in the name of, ahem, research, there were three venues I returned to again and again. Two are owned and operated by Andrea Favale, a passionate foodie who brings exceptional care and consideration to the food he serves and to the establishments he runs. 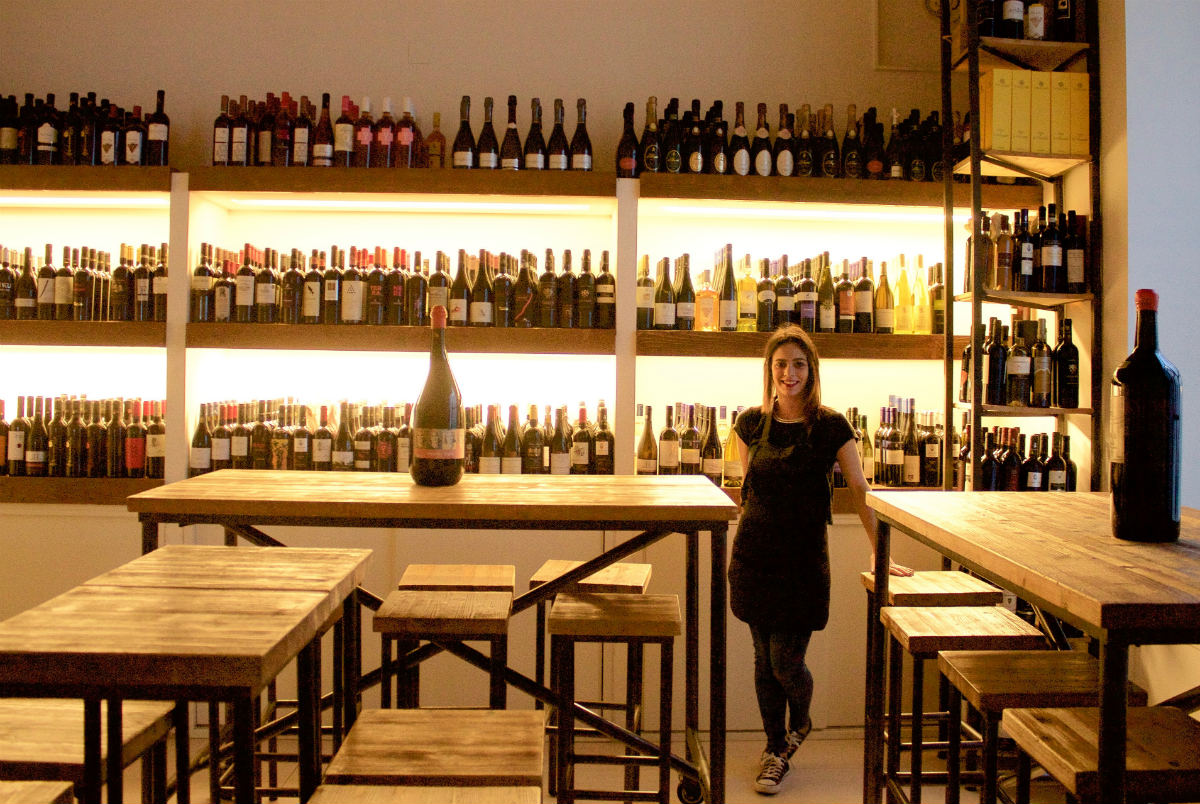 The wine selection on display at Mamma Elvira Enoteca.

Mamma Elvira Enoteca
Via Umberto I, 19; +39-0832-169-2011
With the opening of his wine bar in 2011, Andrea brought a shot of innovation to this traditional town, whose old-fashioned wine bars had typically offered just a few wines by the glass. Andrea broke that mold, offering glasses from every one of his 250 wines. He manages this with enomatic machines, which allow an open wine to last up to six weeks. At €4,000 each, the machines were an expensive investment, and Mamma Elvira is the only wine bar in Lecce that has them.

Further setting this wine bar apart is the service. When you order a glass of wine, the bottle is brought to your table so you can see what you're ordering, and you can taste multiple wines before choosing. Not many locals in Puglia speak English, so Andrea's perfect English makes it a treat for tourists to chat with him and learn about Puglia's wine.

From the outside, his wine bar may look just like any other on the street, but unlike other places that may serve meals bought frozen at the supermarket, at Mamma Elvira, everything is made in-house daily. Andrea is committed to purchasing all produce from local farmers and "never from supermarkets!"

At one point, Andrea provided food from his kitchen to another restaurant, arguably his competition.

"I got criticized for it," he told me, "but I'd rather have them sell my food than sell mediocre food."

It's the same at all meals — lunch, happy hour, dinner, or late night: a variety of small, tasty dishes; five-euro glasses of wine; and genuine, generous service. Andrea can usually be found at the wine bar from 6 to 8:30 p.m. and again after midnight. Visitors in a group who want to do a wine tasting, can have be guide you through a selection at the enoteca or at his new restaurant, La Cucina di Mamma Elvira. 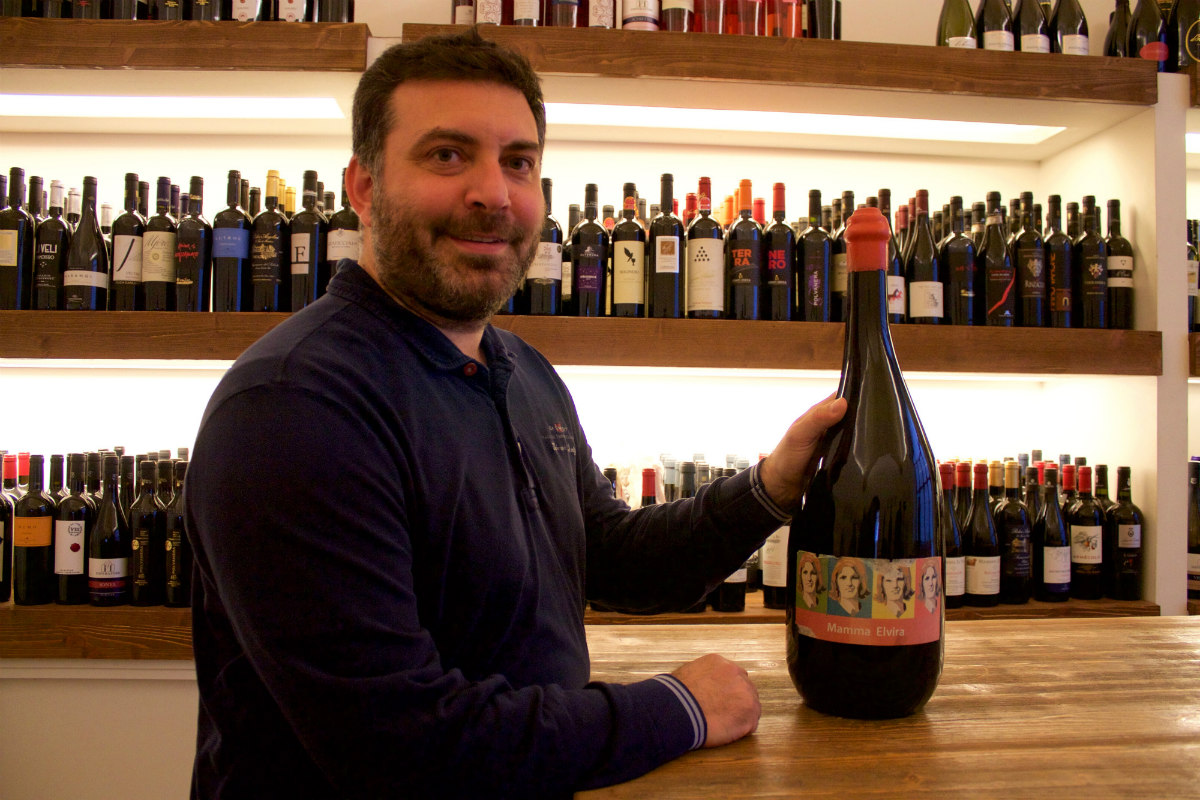 La Cucina di Mamma Elvira
Via Ludovico Maremonti, 33; +39-0832-169-2011
Andrea considers his second establishment, opened in December 2015, a modern osteria, with the low-key vibe typical of an osteria, only with more refined and attentive presentation and service. While his enoteca only serves wine from Puglia, the osteria's list covers all the big names throughout Italy. The menu, true to the bounty of Puglia, has just enough creative flare to make the earthy tones of the herbs and vegetables stand out.

I had the most heavenly appetizer I've ever eaten in Italy here: burratina con olio fumo e ciliegino semi secco (burrata with fumo oil and half-dried cherry tomatoes). Fumo oil is made from taking high quality cold-pressed Puglian olive oil and cold-smoking it with natural wood. The dish's flavor paradise consisted of the freshest, creamiest burrata; cherry tomatoes dried to heighten their flavor, not diminish their plump summer ebullience; and snappy green chives for a perfect spicy note. Just when I thought the dish couldn't get any better, the smoky olive oil turned into a flowery finish in my mouth. Andrea had chosen for me the wine, a negroamaro reserve 2011 with violet hues and elegant balsamic and dark berry notes from a winery called Vallone in the Salice Salentino area of Puglia. Paired with the burrata and the pasta that followed, I swear I heard a symphony begin to play.

Another favorite was fettuccine with sausage ragù and puntarelle (inner stalks of chicory), a dish Andrea created, taking the humble chicory that is so common in Puglian cuisine and refining it a touch. Served with rustic homemade whole wheat fettuccine and small savory morsels of local sausage, the dish epitomizes the earthy goodness of farm-to-table.

The masses on TripAdvisor haven't started clamoring about it yet, but La Cucina di Mamma Elvira is easily and quietly one of the best places to eat in Lecce. 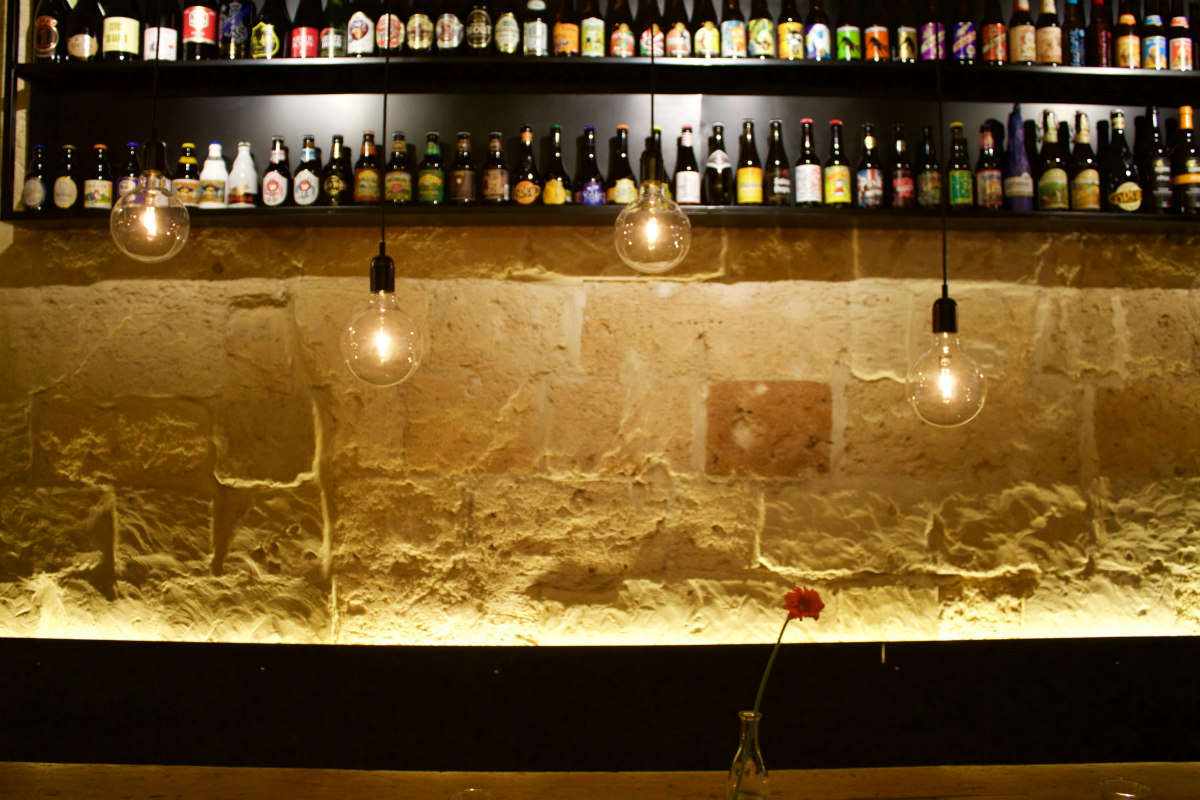 Industrial hanging lights give the old architecture a modern feel at Mastro.

Mastro
Via Giuseppe Libertini, 56; +39-0832-179-8423
Maria Pia Pinelli and Massimo Giannetta have created an inviting and elegant atmosphere at their new wine bar on one of the main pedestrian streets that winds through the historic center. It quickly won me over. The food and drink are top-notch, Maria Pia and Massimo are exceptionally welcoming, and the design is beautiful. "We didn't focus on what everyone else was doing," Maria Pia explained. "We focused on what would attract us."

Massimo, an architect, conceived of the space as an inviting living and dining room where people would want to hang out. Inside, patrons are surrounded by creamy Leccese stone, arching overhead into volta a stella (star volts typical of Lecce's Baroque architecture). Industrial lights, creatively looped around wooden poles, provide a modern touch to the ancient stones. 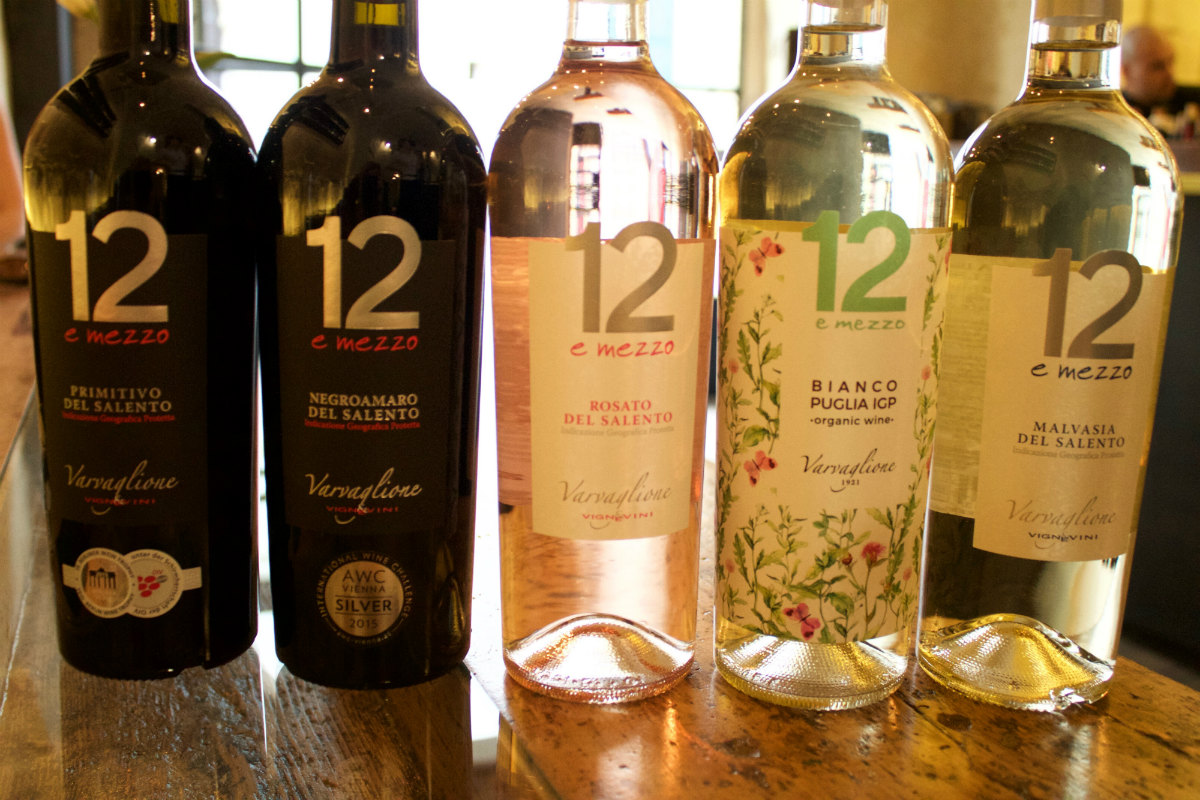 The wine list has 200 wines and 150 artisanal beers, of which more than 40 are Italian. Gone are the days of choosing between Moretti and Nastro Azzurro: Italians are making exceptional craft beers. Mastro continuously bring in new wines and beers, announcing new arrivals on their Facebook page. Maria Pia is currently excited about the "12 e mezzo" line from the Varvaglione Winery, which recently added an organic white wine.

"Our aim," says Maria Pia, "is to present the best of the world of wine and beer to locals and visitors."

The restaurant uses organic ingredients when possible, or at least produce that has not been chemically treated. In order to serve bread that is not made with white flour, Boulangerie (Lecce's best bakery) makes loaves especially for them. The menu is small, but the dishes are carefully chosen to pair well with wine and beer.

"I never have gorgonzola on the menu, because the mold alters the taste of both wine and beer," Maria Pia told me. "It is troppo difficile."

As a single traveler, I enjoyed the long communal table. The first time I sat there, a German couple with a young adult daughter joined me. We shared wine and swapped travel stories, and they told me they were staying at a farm by the seaside. A week later when I was dining in Mastro again, they walked in. For their last evening in Lecce, instead of trying a new eatery, they came back to Mastro. Like me, its charms had lured them back.

Do It Like an Italian: Escape to Puglia
Holy Hotel! It's Pure Italian Magic at an Off-the-Grid Convent-Turned-Palazzo
On This Luxe Italian Island, Money Can Buy Happiness