Cycling 100 miles through the Rocky Mountains sounds pretty daunting. But Fathom's contributing koan editor (yes, we really have one) James Sturz took the challenge and brought us along for a ride filled with stunning vistas, moose sightings, and lots of Lycra.

COLORADO ROCKIES – At 9,300 feet, approaching Rabbit Ears Pass in Grand County, Colorado, there was an unmistakeable thfwish as my bike's front tire went over a lumpy yellow-bellied marmot carcass.

Do I recommend the experience? No. I can still hear the mournful sound puncturing the hush of open skies and roads.

But yes to everything else.

Last winter, I came to Steamboat Springs to ski (and write about it for Fathom). As happens in Colorado ski towns, everyone told me, "Come for winter, but stay for summer" — for the rushing streams, the blooming larkspur and gentian, and the elk and moose.

But no, I didn't exactly stay — I went back to my life in New York City, where I was likelier to see pigeons, waterbugs, and cockapoos — but I did return. And this time, instead of going down the slopes, I found myself mostly going up them, on a Steamboat Springs handmade titanium Moots road bike as part of a two-day, 100-mile tour of Northern Colorado, called the Tour de NoCo.

Yes, of course, I should have steered around the marmot.

It weighed more than the bike. 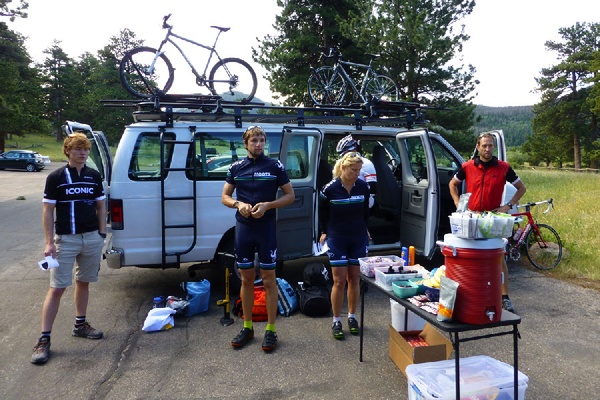 Our group assembled in Fort Collins, many of us from sea level, where our lungs weren't used to working so hard. We had a day to adjust, mainly by mountain biking, whitewater rafting, and drinking handcrafted beer. (Fort Collins-based New Belgium hosts bike-in movies on the lawn in front of the brewery.) Then the folks from Moots fitted us with leg-powered versions of the sweetest street-legal roadsters I'd ever seen, and it was time to ride.

The following morning, Joe Solomon of Iconic Adventures shuttled us to Trail Ridge Road in Rocky Mountain National Park, the highest continuously paved road in the United States, and set up a smorgasbord of energy chews and gels, plus packets of Chamois Butt'r, a skin lubricant I had to be warned wasn't edible and that was meant for rubbing on the most sensitive parts inside your shorts. (I asked Joe to demonstrate how to apply it, but he politely refused.)

Then we started uphill. 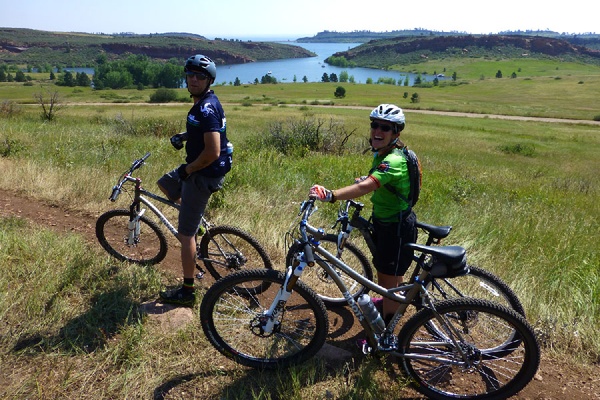 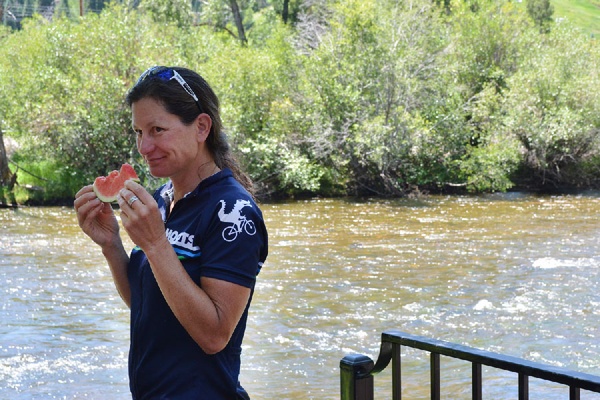 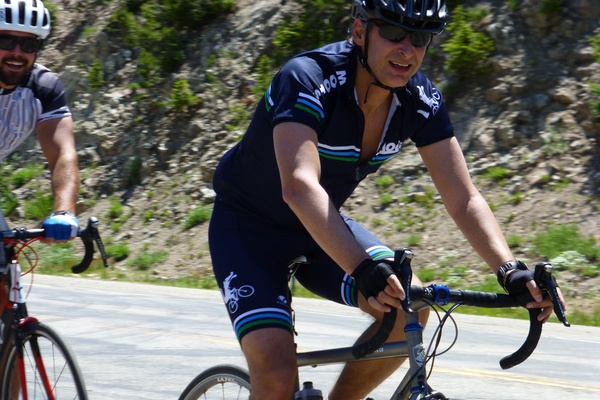 The author embracing his MAMIL look.

It wasn't long before my whole body started to burn, in ways that were both pleasant and unpleasant, from the altitude and exhaustion. There was just the click and whir of my wheels and gears, and my insistent breath. Plus the pines and mountains and vast, welcoming sky. We rode past mule deer, elk, foxes, and golden and bald eagles as we continued and recontinued to climb.

Along the way, Joe and a team from Moots parked along the road to refill our water bottles, provide more snacks, and make last-minute adjustments. Ruthie Matthes, a three-time U.S. road-cycling champion and one-time member of the U.S. Olympic Team, pedaled ahead, encouraging us whenever we caught up. But I'm what Brits these day call a "MAMIL" — a middle-aged man in Lycra — which means my sightings of her were about as frequent as a snow leopard.

That first day was a 5,134-foot climb, almost a mile. What I saw a lot of were my rotating wheels. 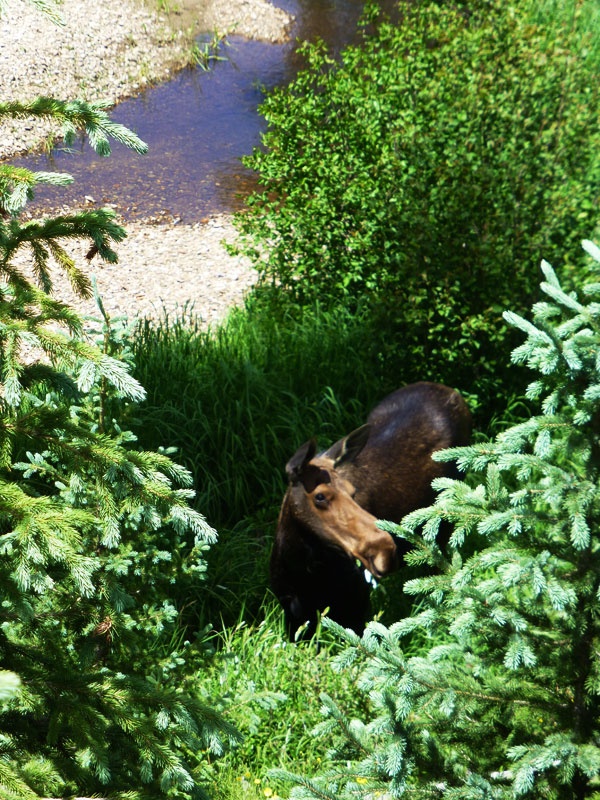 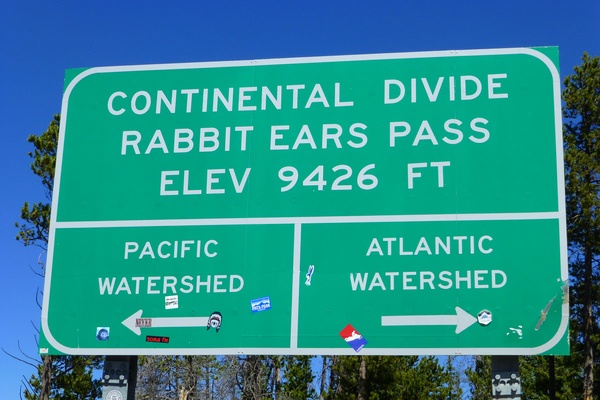 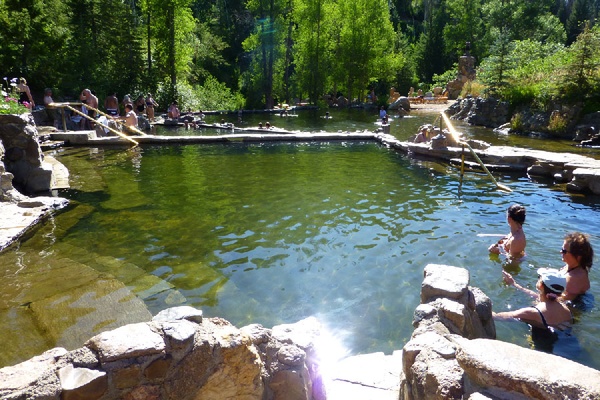 Strawberry Park Hot Springs, the reward at the end of a long ride.

Fortunately, the next day was easier. On the plus side, there were buffalo in open plains and grazing moose. Less fortunately, there were also the marmots, R.I.P. We rode through Routt National Forest, from the town of Walden, across the Continental Divide to Steamboat Springs, where I was glad to finally dismount and soak my aching body in 105-degree water in the natural pools at Strawberry Park Hot Springs. It was hard to know which hurt more, my legs or my butt. But a sense of satisfaction at having conquered Colorado's highest peaks burned inside me too, and glowed alongside the enthusiam of Ruthie’s toothy smile. (I finally spotted her at the end.)

Was that actually the end? No, not quite yet. The following morning, I visited the Moots factory, where the walls are lined with seamless titanium tubes, and I was fitted for one of the 1,400 frames it produces each year. I'm waiting for that custom-sized titanium road bike now. Once I get it, I'm going to get back in touch with Joe to ask him again to demonstrate the Chamois Butt'r. 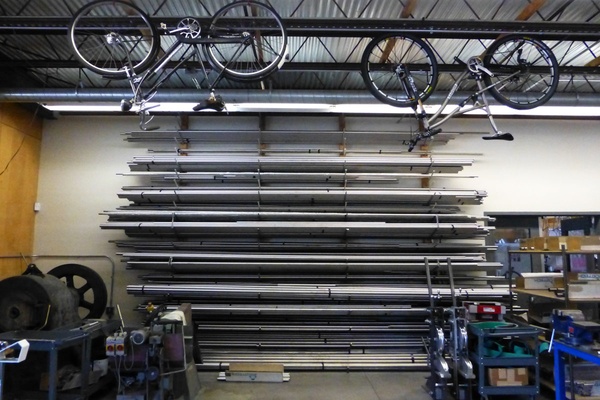 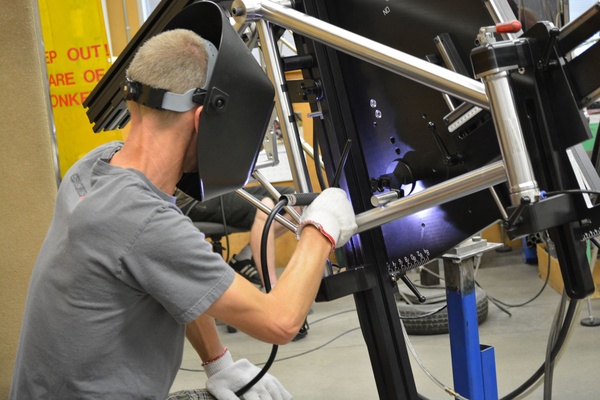 Bicycles in development at Moots factory. Photo by Nikki Inglis.

BIKES: To arrange a similar ride, contact Iconic Adventures. To do it on a handcrafted Moots bicycle, contact the company.