A nice boy from the Jersey Shore heads to prep school in Princeton and St. Andrew's University in Scotland, where he encounters the scions of privilege and their wanton ways of sex, drugs, and crime. Down the Shore is the debut novel from Stan Parish, a New York City editor at Bloomberg and Fathom's new New Jersey correspondent. In this excerpt, the protagonist is back on the beach before leaving for Europe.

Cops were gathering in the street outside the restaurant, anticipating the crush of a summer night, the inevitable fights.

"Sure you brought enough guys?" Mike called to them, as we headed for the car.

"Come over here and say that to my face," one of them said, flipping his baton into the air and catching it above his head. He and Mike went way back.

"Take your cousin to Disco's," Casey said to Melissa. "And Clare too. Me and Tom are going to Rommel's for something to drink."

Clare had been sticking close to me, but Casey was a good manager because he made directions sound like prophecy.

"Pick up smokes for me," Mike said.

"No," Casey said. "This is like the third time this week."

"You drive," Casey said, tossing me his keys as we walked to the car. The sun was down, the traffic on the boulevard transformed into one long stripe of red and white light. I eased out of the space and threw the GTI into gear.

"You should come visit me at school," I said. "Take some time off once I get settled."

"I should," Casey said, arching his back and digging in his pocket for his phone.

"Yeah," he said. "I called you five hours ago. Tuesday's fine. As long as Tuesday means Tuesday. No, we'll take my car. Four a.m. Yes, I'm serious. Hey, you got any more of those books-on-tape? OK. We'll come by later."

"Who was that?" I asked as he hung up. It seemed as if he was extra careful not to discuss business with me or around me after my arrest, although that might have been my own paranoia.

"Disco. The guy with the bar in his garage."

The car in front of us had stopped to make a left. I slammed on the brakes and something slid out from under the seat and smashed into my heel as we skidded to a stop.

"You should find a better place for that," I said, nudging the gun back under the seat.

"You should learn how to drive," Casey said.

At Rommel's Liquor Store, Casey grabbed a bottle of Patrón and a Diet Dr. Pepper for Melissa. He pointed to a corkboard on the wall behind the counter as we waited in line. A hand-lettered sign above the board read "busted punks" and every inch of cork was covered in confiscated fake IDs.

And there we were, side by side, our faces rounder and smoother, the cheap ink on the fake Maryland state seal faded by the sun. Our invented dates of birth would put us in our late twenties by now. Years ago, we had swaggered in with freshly minted licenses, and put cheap vodka on the counter. I remember looking up at the board after we'd handed the cards over and finding a row of identical IDs, printed by the same tattoo parlor in Wildwood. The clerk pulled an electronic scanner out from underneath the counter, and told us we could put the vodka back or spend the night in jail. As we left the store I watched him pierce the plastic cards with thumbtacks and stick them to the board like butterfly specimens, the holograms glinting under the fluorescent lights like iridescent dust on fragile wings. Casey didn't need ID here anymore.

"What's that?" the clerk asked.

"Nothing. Let me get a pack of Newports too." 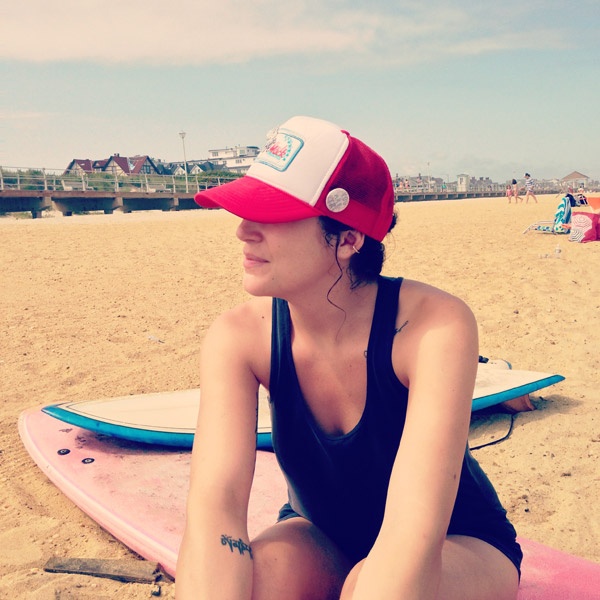 We killed two hours in a garage speakeasy called Disco's, run by a kid called Disco who had long white-blond hair and a tattoo of a horseshoe on the inside of his bicep that stood right side up for luck when his arms were at his sides. Casey took him into a corner to talk as soon as we walked in. The garage looked like a yard sale: sun-scorched surfboards, stolen beer signs, driftwood, movie posters, and threadbare furniture that people down in Harvey Cedars left by the curb at the end of every season. A lifeguard turned nineteen that night, and we all stepped up for birthday punches until the boy's shoulder was red and badly swollen under his dark tan. Clare, I was surprised to learn, could hit. The lifeguard barely braced himself, not expecting much, but Mike whistled through his teeth as Clare's punch sent the boy sprawling into a tangle of rusted beach cruisers. Clare apologized and tried to help him up, but the boy waved him off, laughing.

Our next stop was a poker game held on a yacht tied up at the Shelter Harbor Yacht Club. It's where the bartenders on the island take their tips and play until someone takes the whole pot. The owner of the boat is a fantastically fat orthodontic surgeon from Philadelphia who doesn't play cards, but loves the game for the party it creates and the girls it brings around. He was sitting in a recliner with a massive rocks glass in one hand and a female lifeguard perched on each arm of the chair. There was a constant sway from people coming aboard and going ashore, and most of the crowd were gathered around the spot-lit table in the galley, where the game was underway. Mike had long since been banned, and a bartender from the Sailfish was up $3,000 when I slipped through the sliding door onto the deck without anybody noticing. Clare had disappeared into the bathroom with two cokehead girls who worked at the boardwalk candy store, and I figured he'd be busy for a while. I jumped the gap between the boat and the dock, headed for the parking lot. Casey's keys were still in my pocket from the drive. I unlocked the car, shut myself inside, and reached under the seat.

It was a beautiful piece. I turned it over in the glow of the streetlights, a bright, heavy .357 Magnum in stainless steel. The grips on the revolver's handle were polished cocobolo wood — veined, translucent, smooth to the touch. I thought back to Casey's love of woodshop, of wooden Alaia surfboards, of the wooden-wall Jeeps we'd grown up with. The six-shot cylinder and the simplicity of the mechanism — twin testaments to the owner's self-reliance. The gun was not something he had picked up on the fly. I broke the cylinder open, spun it with a slap of my hand. The six rounds blurred into a brass ring, and became distinct again as they slowed. I closed the cylinder and held the gun below the dash in both my hands, thumbing off the safety.

Don't stop there. Read the whole thing.
Down the Shore, by Stan Parish

From Down the Shore by Stan Parish. Reprinted by arrangement with Viking, a member of Penguin Group (USA) LLC, A Penguin Random House Company. Copyright © Stan Parish, 2014.