Alex Farrington, the spirit and wine director at Mouth, knows a thing or two about good cocktails. She works closely with distillers and winemakers to bring the best and most interesting bottles to Mouth's liquor shop in Brooklyn's Dumbo neighborhood. She was kind enough to give us a hit list of her favorite Brooklyn bars and restaurants serving craft cocktails.

BROOKLYN – My favorite local bars have the same qualities as the distilleries and wineries that I work with. They're small, thoughtful in execution, unfussy, focused on quality ingredients, representative of their neighborhoods, and full of friendly folks. In other words, they're bars run by people, not by companies. 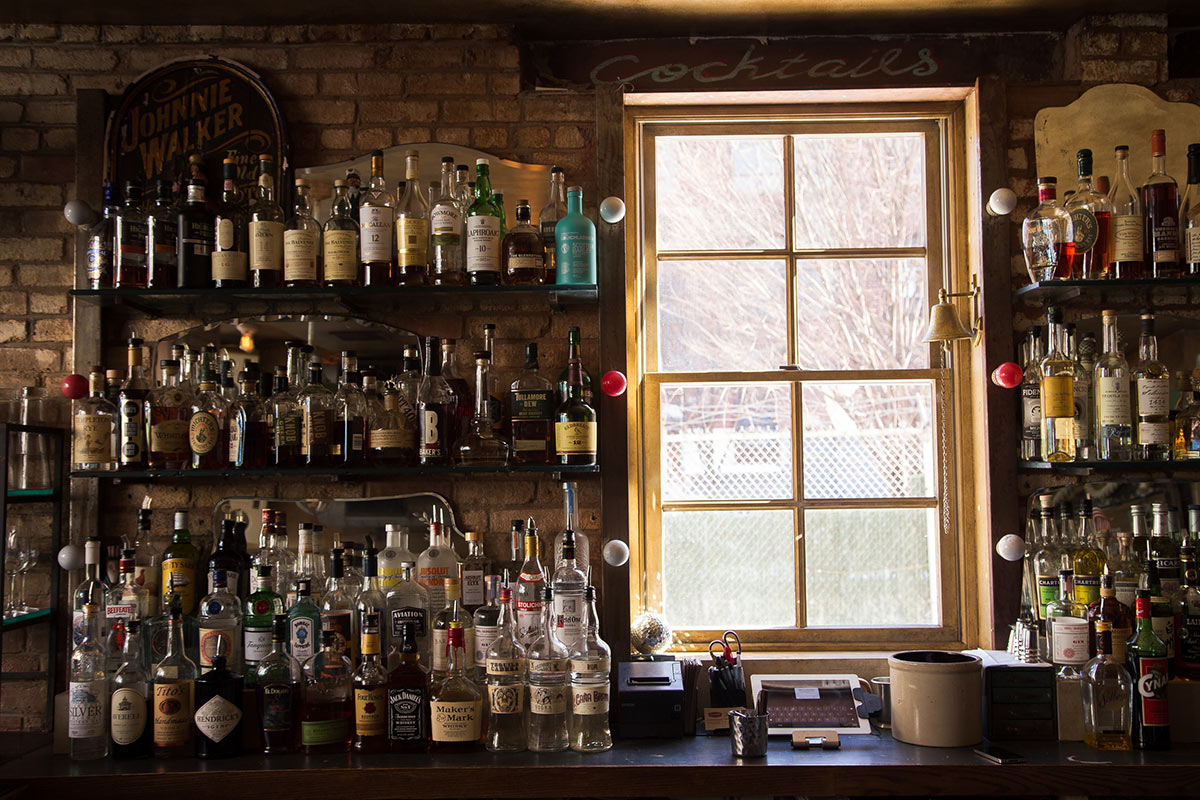 Because intra-borough travel is difficult (thanks MTA!) I don't get up to Williamsburg as much as I used to. But when I make the effort, I'm consistently greeted by new bars and restaurants doing amazing things. There are a few spots on my list that I have returned to time and time again, and stanchions where one can pay homage to the Williamsburg of old.

The Shanty at New York Distilling Company
79 Richardson St.; +1-718-412-0874
Distilling in Brooklyn dates back to the 1700s, and even during Prohibition there were tons of illegal sites in operation. New York Distilling Company continues the tradition by making some of the finest booze around and serving it at their bar next door. One of the great things about The Shanty is that the bartenders don't focus on the recipe. They focus on ingredients. Specifically, on the booze made on the still that is visible from your barstool. Founded in 2011 by Tom Potter (a founder of Brooklyn Brewery) and industry veteran, educator, mentor, and influencer Allen Katz, the Shanty is a place where you can take a tour on a Saturday or Sunday and grab some cocktails, beers, a light nibble, and have yourself a fine day.

Extra Fancy
302 Metropolitan Ave.; +1-347-422-0939
As with most things in Williamsburg, the name Extra Fancy is said with a wink and a nod, as it's truly anything but. Make your way to the casual New England seafood-shack-inspired restaurant with killer, hilariously named cocktails, an amazing playlist, an entertaining and award-winning bar staff, and a late-night menu that cannot be beat (and is open until 3:30 in the morning). Grab a huge oyster tower with friends or nosh on Szechuan fried chicken to stave off the headache you're bound to have when you wake up. 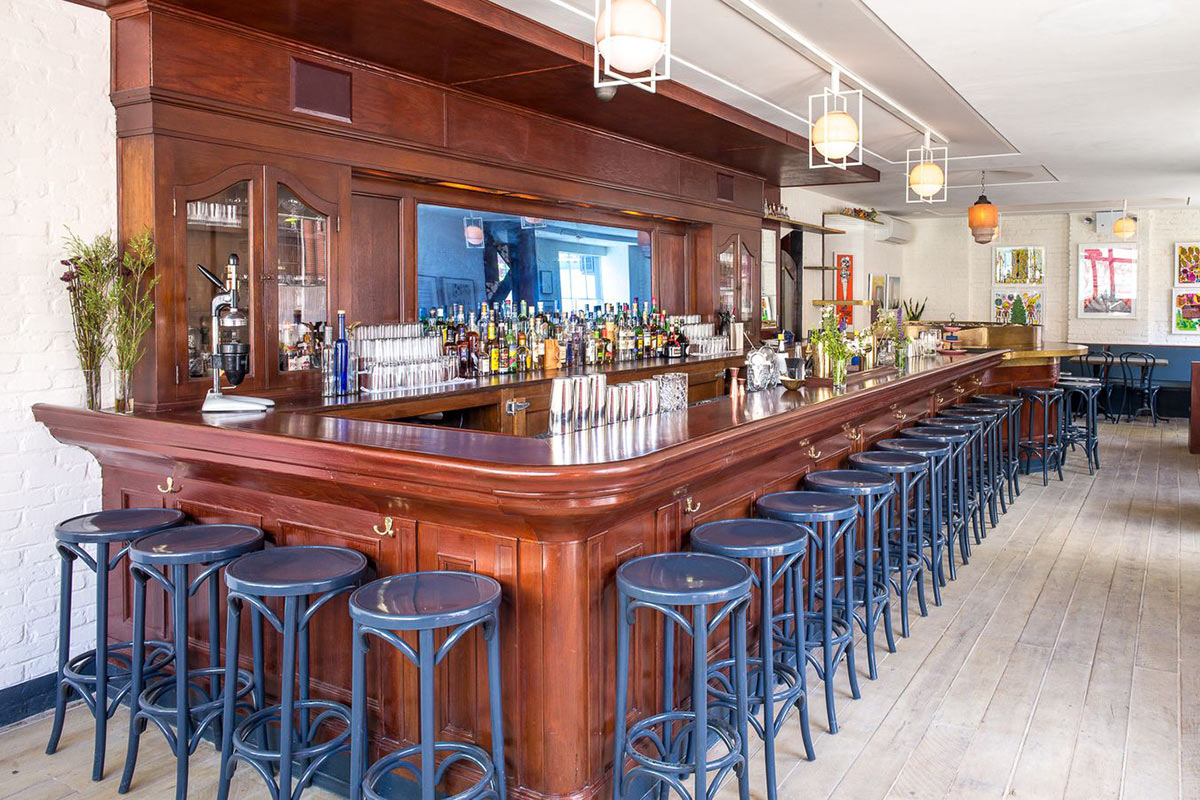 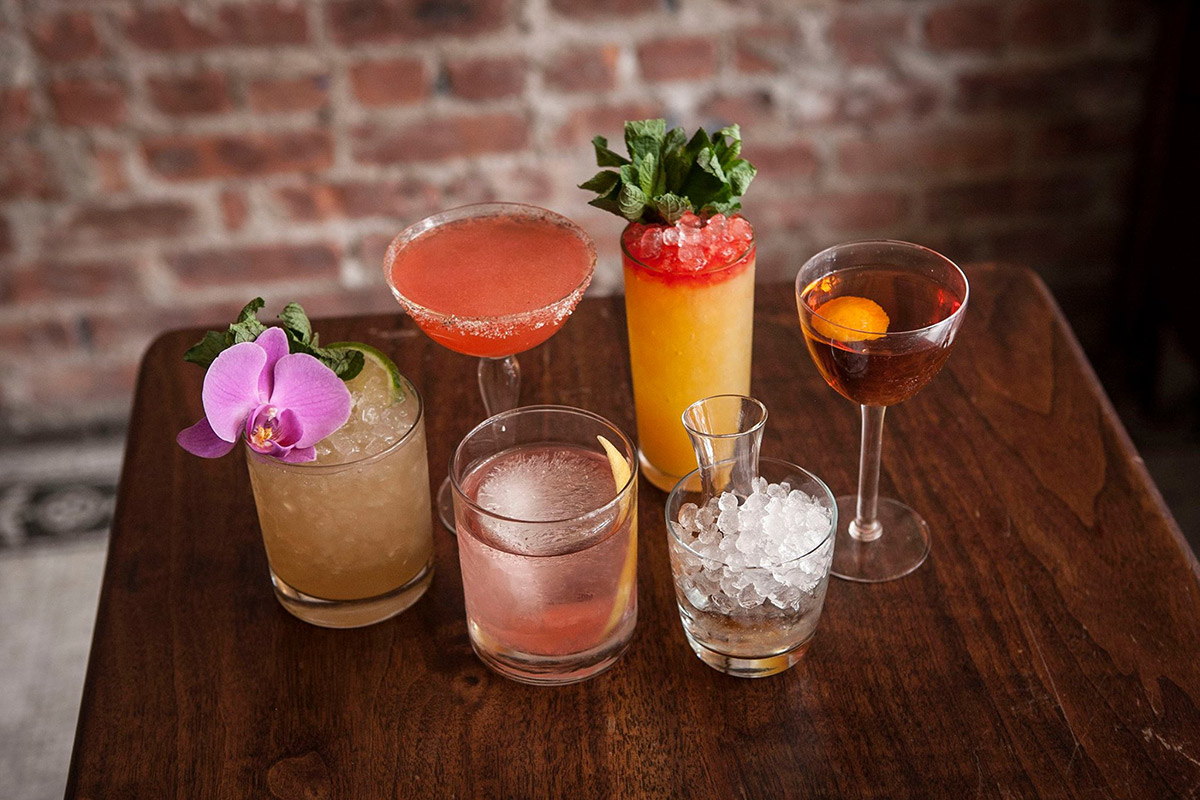 We'll take one of each please. Photo courtesy of Leyenda.

Years ago, a friend from Cobble Hill complained that she needed to take the subway to Manhattan whenever she wanted a good drink. Said friend would be shocked to see the choices in the neighborhood now. I can neither confirm nor deny that I've been known to make a bit of a bar crawl out of all these great spots.

Grand Army Bar
336 State St.; +1-718-422-7867
There's nothing better than dollar oysters and happy hour beers and cocktails. Grand Army Bar is a new player in the Cobble Hill scene from a few recognizable Brooklyn bartenders (Damon Boelte, Noah Bernamoff, and Julian Brizzi), along with food photographer Daniel Krieger. I first recognized Damon by his voice, as I've been a long time listener of his podcast, The Speakeasy. The space is sophisticated in the most approachable way: It's bright and airy and encourages conversation. The drink menu is full of fun, inspired drinks, like the Surfliner (it's teal!) and the Arrowhead LTD (an amazing beer cocktail).

Leyenda
221 Smith St.; +1- 347-987-3260
Leyenda is a word used to describe the all-encompassing Latin world, both old and new. Opened earlier this year by a powerhouse of New York restaurant and bar veterans, including Julie Reiner, Ivy Mix, and chef Sue Torres, this spot is cozy and feels like your home away from home (assuming your home is someplace where Spanish is the native tongue). Any time Ivy is behind the pine is a treat — she just won American Bartender of the Year. The cocktail list is based in mostly mezcal and tequila drinks, as expected, but rums from all over the world also play a role, as do pisco and sherry. (They have sherry on draft.) There is a great mix of light cocktails (bottled Paloma, anyone?) for earlier in the evening to pair with snacks like spinach manchego empanadas and ceviche or boozier drinks like Palo Negro to go with Grandma Torres' pernil and mofongo.

Clover Club
210 Smith St; +1-718-855-7939
Clover Club opened seven years ago and has set the standard for every bar that has opened since. Between the classic Victorian aesthetic, menu that reads like a novel, top-notch service, and innovative techniques (there are only four legendary cocktails that stay put on the seasonally updated menu), it's one of my favorite places to be. Those who tend bar are experts in crafting new takes on beverages of old. Have you ever had a cobbler? A royale? A true punch? You can, and should, explore the lengthy menu. It does not disappoint.

June Wine Bar
231 Court St.; +1-917-909-0434
When you need to tuck into a cozy nook and sit with a glass of wine, June is the perfect choice. With an impressive by-the-glass or quartino list, tall arched ceilings, dim lighting, and small delicious bites of food to share, this is a great date spot. (Though you can also hit the garden with a group of friends.) The wine list features natural varietals from around the world, very expressive of the terroir of their origin, and the food menu includes thoughtful pairings. 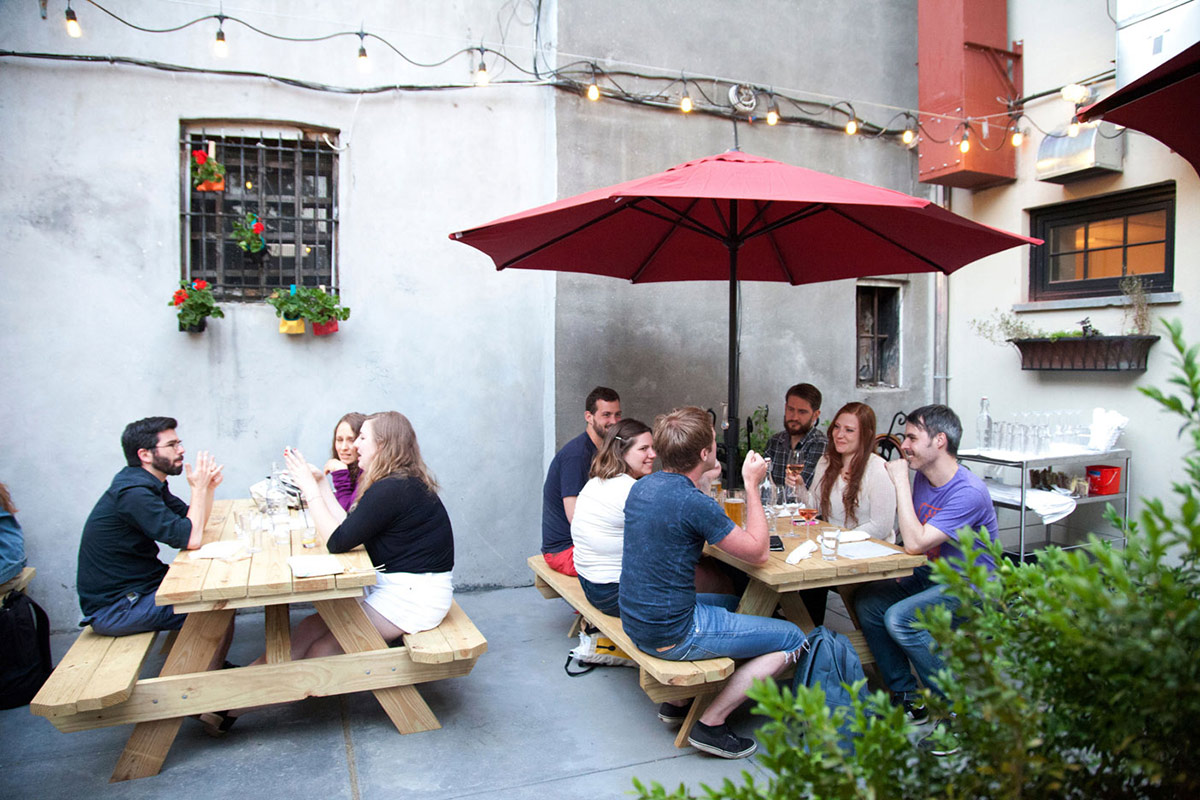 Tucked away in the southernmost part of Park Slope is the tiny neighborhood of Windsor Terrace, inhabited equally by young families and octogenarians that recall Old Brooklyn. This mash-up makes it super special and authentic, and it also happens to be the first place I lived in Brooklyn, so the neighborhood occupies a big spot in my heart.

Double Windsor
210 Prospect Park West; +1-347-725-3479
It opened in 2009, but looks and feels like it's been around much longer. With fourteen taps and a selection of hard-to-find, quirky, and delicious brews, this spot should be on every craft beer lovers list. Sit at the bar and talk to George about life, the neighborhood, or sports (all subjects he is an authority on) or sit in the window and watch the neighbors pass by.

Krupa Grocery
231 Prospect Park West; +1-718-709-7098
It used to be a bodega, but you'd never know from the sleek decor. This stop on many WT locals' commute offers coffee, espresso, or a quick bite in the morning, and, even more commonly, a glass of vino or dinner on the way home. Chef Joseph uses fresh seasonal ingredients in ingenuous ways, and the cocktail menu is just as inventive, with barkeeps often using local spirits in their drinks. What I really love is their rotating list of beers and wine on tap. It's all at a high level, but not at all stuffy. 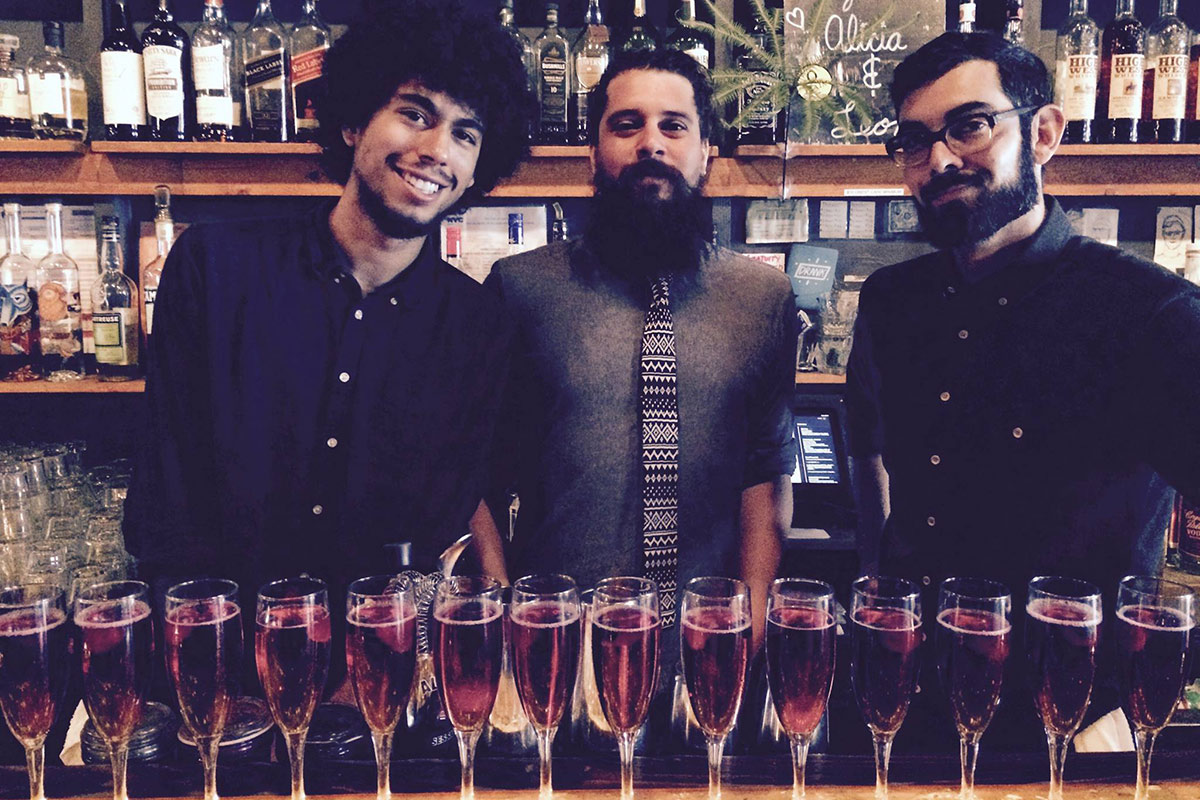 Drinks for everyone. Photo courtesy of Sycamore Bar + Flowershop.

Ditmas Park is sort of in the heart of Brooklyn location-wise — only 25 minutes to Manhattan on the Q — and yet it feels hours away. Backyards, porches, gardens flanked by 100-year-old trees. That's right, you can breathe.

Sycamore Bar + Flowershop
1118 Cortelyou Rd.; +1-347-240-5850
I decided to move to Ditmas after a morning walking the Victorian-home-lined streets and a long afternoon spent in Sycamore's back garden. The owners of acclaimed and local favorite The Farm on Adderly opened the place in 2008. With a flower shop in front, an amazing oasis in back, a wall of whiskey behind the long bar (they've amassed 100+ so far), and a rotating list of food vendors, it's all I could ever hope for in a neighborhood haunt. Whether it's a beer after work or brunch starting with at the Bloody Mary bar, this is my go-to. 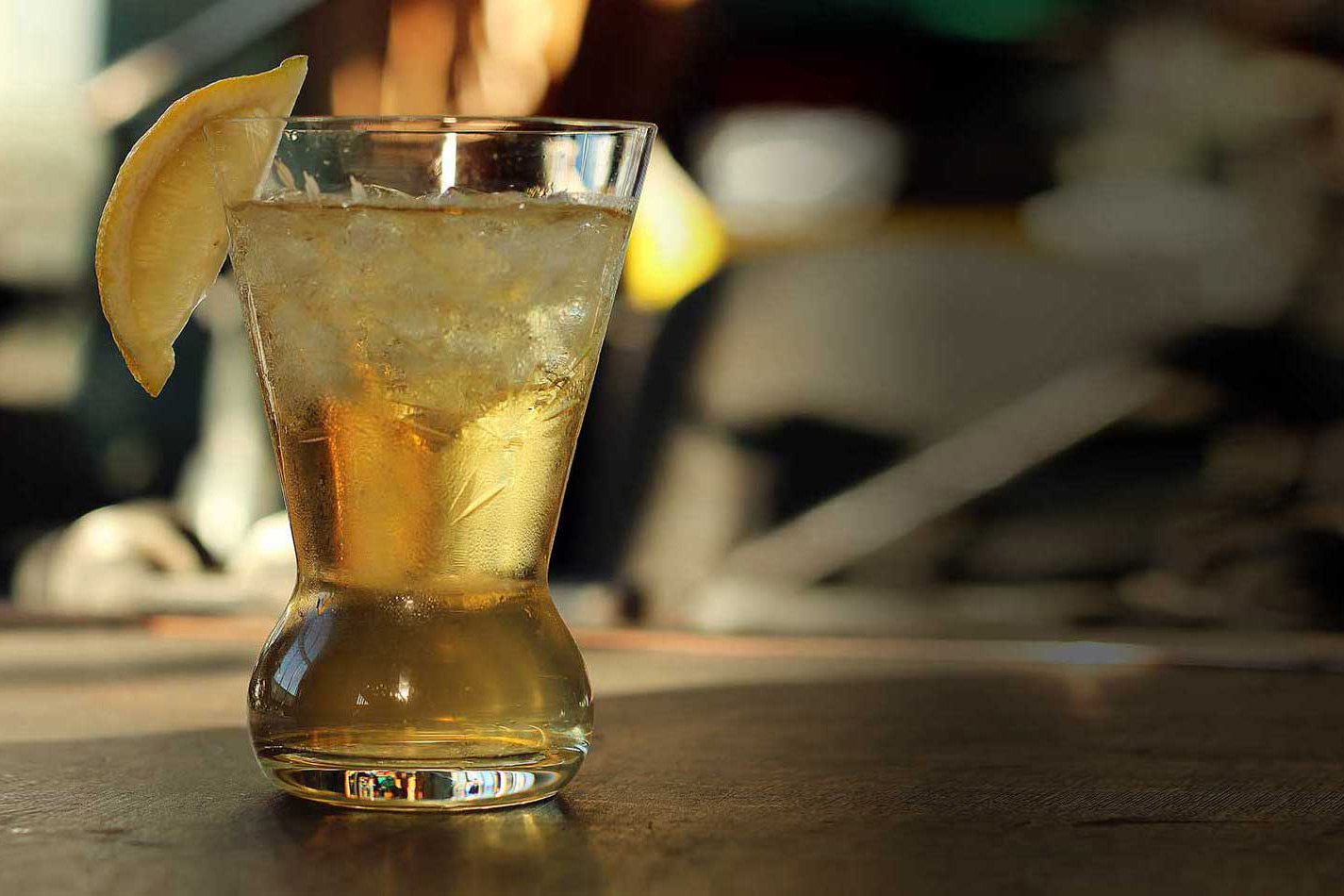 Outsiders rarely visit Sunset Park, which is a shame because it has a lot to offer. A diverse population, which lends to the amazing restaurant scene — in my opinion, it's where you'll find the best tacos and Chinese around. Industry City sits on the water in a huge industrial complex built during New York's shipping heyday. It is now home to artists and small business, including chocolatiers, ice cream makers, distillers, and the Brooklyn Nets training facility (soon).

Industry City Distillery Tasting Room
33 35th St., 6th Fl.; +1-718-305-6951
I first stopped at the ICD Tasting Room to pick the brains of the distillers, still designers, and mad scientists behind the project and was blown away by the entire operation — from fermentation and distillation to bottling and mixing. They use their technical reserve to make fernet, limoncello, elderflower liqueur, vermouth, and bitters to use alongside their Industry Standard Vodka and fresh juices. They craft some seriously delicious cocktails. They also use the waste from distillation to fuel cook stoves for snacks. My favorite way to spend an evening is drinking at ICD while the sun goes down over the bay, Statue of Liberty within view. It's worth the ride on the R train (or even the traffic on the BQE).