A boutique hotel on the Dalmatian Coast adds contemporary glamour to a medieval town.

CROATIA - The Greek Islands and the Italian coast have long been coveted summertime destinations, but Croatia has been steadily creeping up the must-see list for travelers.

I visited Croatia with my family during August's boom time, and, after a few lovely but tourist-packed days in Rovinj, we decided to look out for small towns and avoid the most crowded spots (Split, Dubrovnik, Hvar) on our road trip down the Adriatic coast. We made it a priority to check out Brown Beach House in the town of Trogir because it was the best-looking hotel I came across in all of my research, and it was only 30 minutes from Split (we had friends who needed to depart from that airport). It was a great decision. The hotel punches well above its weight, and the town is utterly adorable.

The tiny, picturesque seaside islet of Trogir has a substantial 2,300-year urban history that includes being established by the Doric Greeks, ruled by the Ancient Romans, destroyed by the Slavs, rebuilt by the Hungarians, bought by the Venetians, taken by the Austrians, succeeded by the French, and incorporated into the Habsburg Empire. The medieval fortress, Baroque towers, ancient pedestrian streets, and Romanesque churches maintained over the years have helped Trogir earn a place on the UNESCO World Heritage List and a nickname: The Stone Beauty.

Brown Beach House, in an old tobacco warehouse, faces the old town from across the waterway, which can be accessed by a ten-minute walk over a bridge. Its show-stopping pool and sundeck — designed with a nod to historical Roman grandeur — overlooks the sea. Inside the hotel, beautiful tiles, chic furnishings, bright pops of color, modern light fixtures, framed photographs, and big potted plants give the place a cosmopolitan 21st century feel. It's swank, it's fun, and that it's in Trogir feels like a little surprise. Brown Beach House is a sophisticated hotel bringing a fresh, youthful aesthetic to a place people have been flocking to for a couple millennia.

Rates from $200. Click here for reservations. Or get in touch with the Fathom Travel Concierge so that we can plan and book a fantastic trip for you. 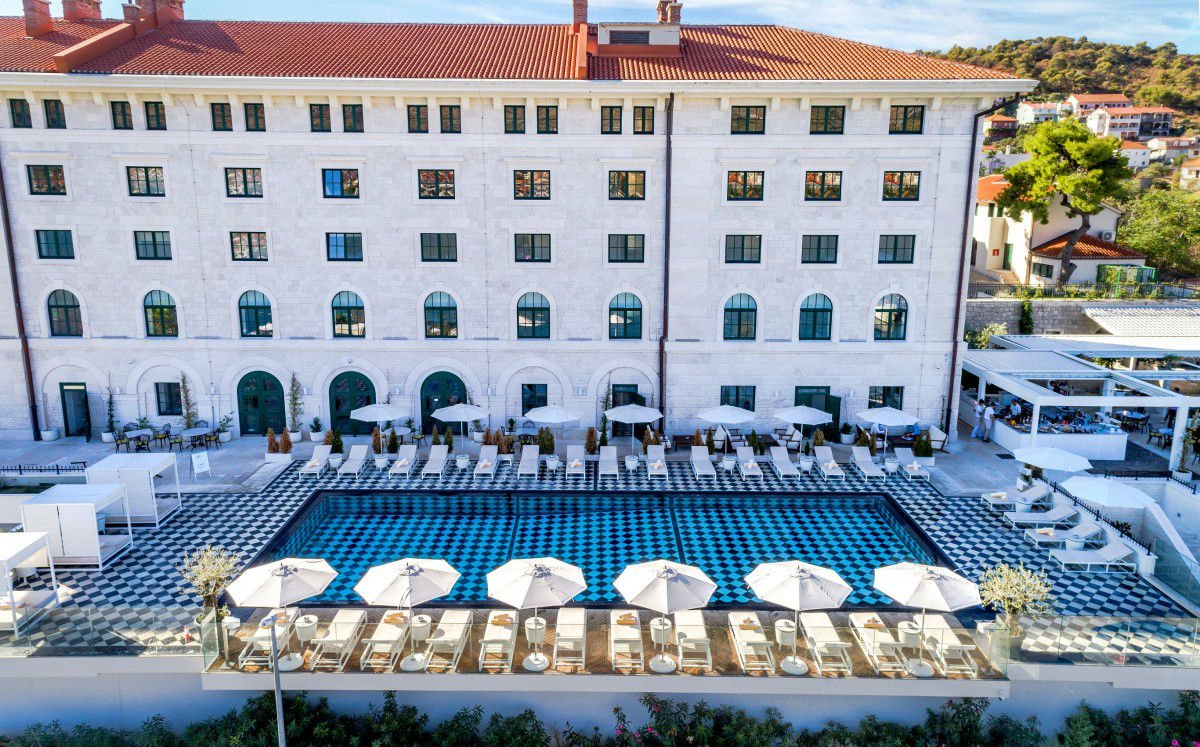 How about that pool? Photos courtesy of Brown Beach House.

Location
Set within medieval walls on a tiny island linked by bridges to the mainland and the larger Civo island, the adorable, compact town of Trogir is a 30-minute drive from Split. The hotel is a ten-minute walk over a bridge to the town's main artery. The hotel offers complimentary bikes for getting around.

This Place Is Perfect For
Boutique hotel junkies (raise your hand) who want to feel stylishly at home even when they are abroad. It should be noted that couples, groups, and families will all feel equally comfortable here.

But Not So Perfect For
Travelers who want an old-fashioned feel in this old-fashioned town. The place is legitimately cool and there's a sunbathing scene.

What’s on Site
The highly Instagrammable pool (love that checkerboard pattern) overlooks the sea and the old town's whitewashed stone buildings with red roofs. There's a spa, a gym, a big library with a pool table, parlor seating near the coffee bar, and room filled with abandoned toys from past guests. (The under 8 set will be very happy about that.) The beach club across the street feels a little more adult, with a beach bar, chaise loungers, umbrellas, and a DJ.

Food + Drink
The Dalmatian Coast is all about seafood, and you won't really want anything else in the heat. The outdoor bar and restaurant has an awning to shade the sun and couches for extremely relaxed dining. Cocktails and coffee are also served in the lobby and living room lounge. There's a nice buffet breakfast in a long dining area next to the pool with yogurts, cheeses, museli, breads, and European staples like Nutella.

Number of Rooms
42 sleek and contemporary suites (one- and two-bedroom), most of which are looking out onto the old town across the waterway.

Drawbacks
The only bummer is that the hotel is directly under the airport flight path to Split, which you learn quickly when you're lying in the pool and an enormous Airbus wooshes by. You get used to it after awhile, but it really scared the bejesus out of the little kids the first time it happened.

Standout Detail
The hotel design and decor is the freshest thing around. (Read Fathom's interview with the hotel designer.) The spacious library lounge was a refuge on a rainy day — our group of friends gathered to have coffee and leaf through design books and play games and generally camp out in nice environs. Ah, vacation. 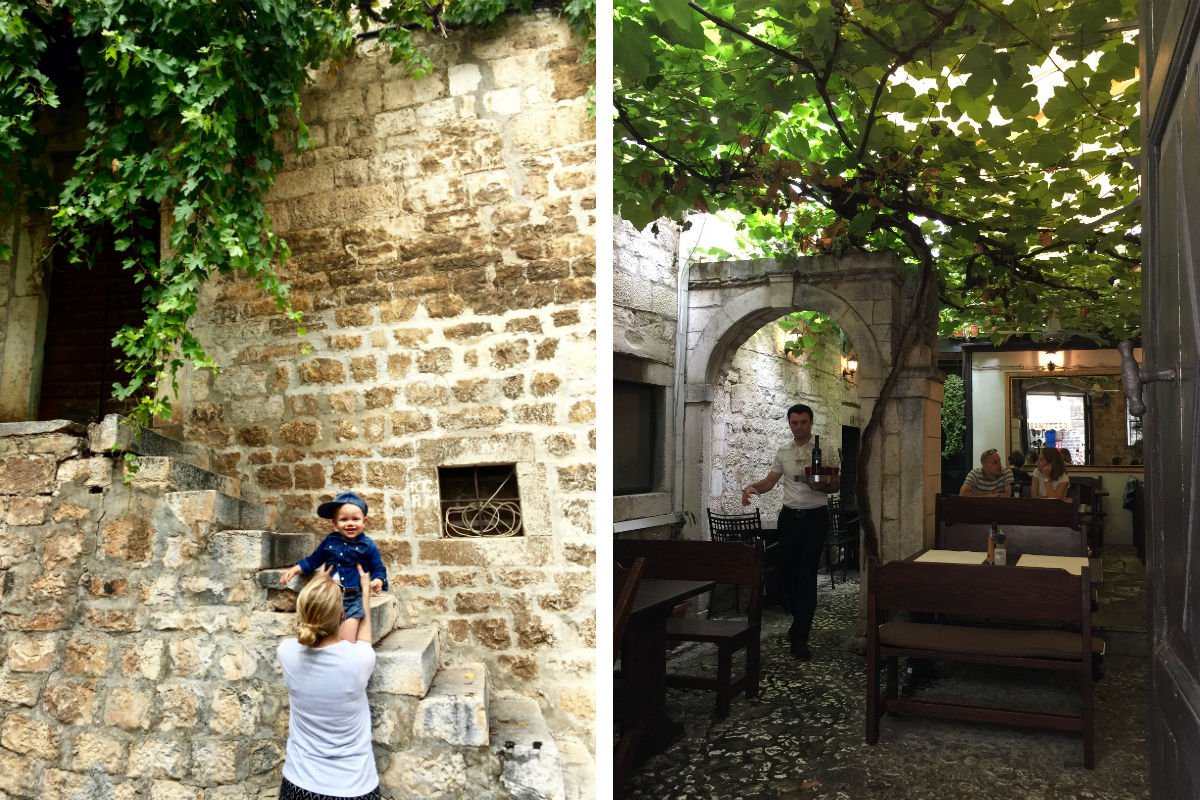 On the streets of the Trogir. Photos by Jeralyn Gerba.

What to Do Nearby
Strolling around town is pleasant and charming day and night. There's a small but lively farmers market, an old fortress, little souvenir shops, kanobas (canteens), and cafes. If you can, charter a boat for a half or full day and head out to the open sea, where the water is turquoise and the horizon is punctuated by stark white sail boats. The best tip we got was for lunch at a place called Barba (Hrvatska, Ul. Hrvatskih žrtava 44; +385-21-884-880). It's delicious and in the weirdest, most unassuming spot off Ulica Hrvatskih Zrtava just outside the old town. It's looks like a nothing little place on the side of the road, but because the owner is not a seasonal operator but a year-round business owner and a bit of a character, he gets first dibs on all the fish reeled in everyday. There were zero tourists in sight, people generally seemed surprised/amused that we found it, and the grilled fish was fantastic with a cold beer.

Good to Know
Trogir is tiny and medieval, and there's no way of getting around without going over a bridge or two. Because of this, there is a lot of traffic. If you're visiting at peak times (summer), park your car and don't plan to get back into it until you leave the city. The place is best to explore on foot anyway.

How to Get There
There are tons of local flights to and from Split, the main city 30 minutes from Trogir. From there, arrange a car service, cab, or rental car to get to Brown Beach House.

Getting Around
The nice thing about old European cities is that they are made for pedestrians. There are lots of winding, cobblestone streets and bridges you can walk over. We rented a motor boat on a lark right in front of the hotel — an easy and fabulous thing to do if someone in your party knows how to operate one. After our last lovely morning on the water, we were able to drop our friends off at the airport by boat. Not too shabby.

Istria, the Better Italy
Chasing the Vines Through Dalmatia
The Sommelier's Tour of Croatia