With Marvelous Manhattan: Stories of the Restaurants, Bars, and Shops That Make This City Special journalist Reggie Nadelson has penned a valentine to the legendary and timeless institutions that make her hometown of New York as timeless as it is cool. We didn't need a lockdown to remind us what makes these places great, but the 29 spots extolled through personal stories and cultural history can serve as a handy checklist of the places visitors and locals will want to visit again or discover anew. Like Three Lives & Company bookstore, Di Palo's Italian grocery, Bemelmans Bar, and Charles' Country Pan Fried Chicken restaurant in Harlem, which is excerpted here.

It’s seven o’clock on a February evening in Harlem, and at Charles’ Country Pan Fried Chicken, a faint aroma wafts out on the cold night air. At 132nd Street and Frederick Douglass Boulevard, Charles’ is a storefront restaurant, nothing fancy; inside, there’s a trio of long tables and the counter where you order. Charles Gabriel, chef and owner, is downstairs in the kitchen frying up the chicken.

It all feels like a throwback, a time before fast-food and chain restaurants — both low-end and high — shut down the ma-and-pa eateries and stole their livelihood. There are those of us, though, who willingly stand in line because the few remaining places like Charles’ give New York a beating human heart and make it worth living in.

There are historians who claim that fried chicken originally came from Scotland. To most Harlemites — to most New Yorkers, in fact — it’s a dish that in large part came to New York from the South during the Great Migration and became a staple; in Manhattan, some of the best of it has been cooked by Charles Gabriel for decades.

His is the platonic ideal of fried chicken, the essence of the bird: moist, tender meat, mouthwatering in its crispy delicately seasoned crust; every batch is seasoned three times, then constantly turned as it’s gently panfried in soybean oil, which is low in saturated fat (in case you’ve been reading health columns that say fried chicken can kill you); anyhow, this is chicken I’d die for. Other fans include Whoopi Goldberg, Danny Glover, and Wesley Snipes, all of whom have regularly ordered chicken from Charles. Charles Gabriel has been written up by the New York Times and The New Yorker. On a recent Super Bowl Sunday, the restaurant sold two thousand pieces of fried chicken.

Coming up from the kitchen, Charles is holding a pan of freshly fried chicken. For regulars, he has a ready smile, and he greets an older woman by name, kisses a little girl in a pink winter jacket.

“Harlem has a lot of love for Charles,” says Karen Murray, who, with her husband, Curtis Archer, has come to meet me for dinner. The little girl in pink announces that she loves the chicken.

“It’s seasoned to perfection, a component often missing in fried chicken,” says Karen, who admits that as one of the few Black people born in Vermont, she may not have as much fried chicken cred as someone from the South or Harlem; still, she knows a delicious chicken breast when she tastes it.

To tell the truth, Karen and I have both been on no-carb diets since New Year’s, but one bite of the chicken and we’re both lost to it. You eat it with your hands. The skin, as it slides off, has a lovely crunch; the juicy flesh gives way in your mouth. People still waiting in line eye us enviously. You get a couple of sides with your chicken: mac and cheese, yams, okra, collard greens, black-eyed peas, white rice. Charles serves smothered pork chops, oxtail, and barbecue, too, but most people come here for the chicken.

“Just a buttermilk-and-egg wash overnight,” says Charles. “Dip it in flour, salt and pepper, then a few secret extras,” he adds with a smile. “That’s all,” he says, as if anyone could do it. But no one else has invested a lifetime of history, passion, bad times and good in making it perfect. Nobody else has a collection of old cast-iron pans, seasoned over decades, to fry their chicken in.

Born in rural North Carolina, one of twenty-one kids, Charles learned to cook from his mother. His own two sons live in the South now, and both cook. I ask him if he might go back. “I have memories,” he says plainly. “We lived on a plantation. My parents were share­croppers. When I was six or seven, I got up at dawn to go to the cotton fields and help with the picking. I saw things I can’t even talk about.” He walked four or five miles to school every day, and by twelve he was milking the cows. At twenty, he followed his brother to New York City, arriving in the middle of the 1965 blackout.

His is the platonic ideal of fried chicken, the essence of the bird: moist, tender meat, mouthwatering in its crispy delicately seasoned crust. Karen and I have both been on no-carb diets since New Year’s, but one bite of the chicken and we’re both lost to it.

“I was always cooking,” he says. “Before I had a restaurant, I had a table in the park, then I had a food truck.” His original restaurant was on 151st Street, a gathering place; rising rents and a bad landlord forced him out. He struggled to survive until he found the storefront on 132nd Street. From the food truck to his first restaurant to the current spot, the same customers have followed him.

“Harlem was the Black capital of America, and even decades after the original migration, there were still a lot of people from the South and their descendants,” says Curtis Archer, who works for the Harlem Community Development Corporation and is often called the unofficial mayor of Harlem. “After a long night of partying, friends would all gather to break bread, often at soul food restaurants. This was comfort food,” he adds. But these days, Harlem is changing fast, with new apartment buildings going up, fancy restaurants opening, millennials swooping in for the neighborhood’s “new” cool. A friend points out that Harlem was always cool, but not for the millennials and realtors who have changed it so radically but who for many years were too scared to go that far uptown. After all, the first Starbucks opened in Harlem only in 1999.

“It’s true that the Harlem food landscape has been completely altered since around 2000, when new eateries started opening and the historic landmarks started to shutter,” Curtis tells me.

“A lot of young people now want to grab and go,” adds Charles. A businessman as well as an acclaimed chef, he understands and is adapting to the new style. Even the sides he cooks to go with the chicken are now all vegetarian. (Do not despair! The mac ’n’ cheese, the okra, the greens, the succotash are all rich and delicious.)

As it gets late, Charles and Curtis shoot the breeze about the Harlem they knew, the people they knew, the places they ate: Wilson’s, Copeland’s Reliable, Flash Inn. All gone, Curtis says. “It wasn’t just about food but also community,” he adds.

For dessert, there’s homemade peach cobbler and rich banana pudding — Charles makes his own custard. Karen and I have now completely fallen off the wagon and given up any idea of sticking to our diets; Curtis never tried.

“It’d be great to see Charles’s business expand,” says Karen, putting down her spoon. She adds, “I don’t believe the quality would ever suffer. As mild-mannered as he is, I can’t see Charles tolerating that for one second! He’s got so much pride for his product — so much love and respect for the community he feeds.”

Editor's note: We're happy to report that, according to a report in Eater, a second outpost of Charles’ Country Pan Fried Chicken will open soon on the Upper West Side. Don't bother looking for the restaurant's website. They don't have one. 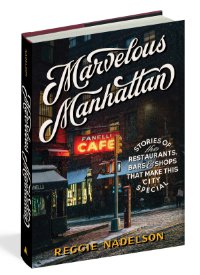 Buy Marvelous Manhattan from your preferred bookseller: Bookshop.org or Amazon.com.

Everything on Fathom is independently selected by our editors. If you shop through a link on our website, we may earn a commission.