New York City chef Marc Meyer has been an advocate for seasonal, local cuisine long before it became a culinary watchword.  No stranger to the different definions of "local," he's cooked throughout the United States and in Italy. He recently followed an interest in Thai cuisine and a passion for muay Thai boxing to the source.

THAILAND – Traveling to Thailand for the first time was an incredible opportunity that came about through less than typical circumstances. When I'm not in the kitchens at my New York City restaurants Cookshop, Hundred Acres, and Five Points, I've been training for many years in muay Thai, a form of kickboxing that’s considered the national sport of Thailand. The gym where I train is coincidentally called Five Points Academy and is owned by a couple of former pro fighters who travel regularly to Thailand to visit friends and the gyms where they trained and fought. Their relationship to Thailand, the food, their friends, and the people is dear to them.

I've wanted to go to Thailand for years, but always disregarded the idea. Not enough time, too busy, the usual etcetera of excuses. But what would be more perfect than an opportunity to learn Thai cooking and train in kickboxing? The light bulb went off: There was a perfect place where I could do both. My trainers made arrangements and found me a driver. 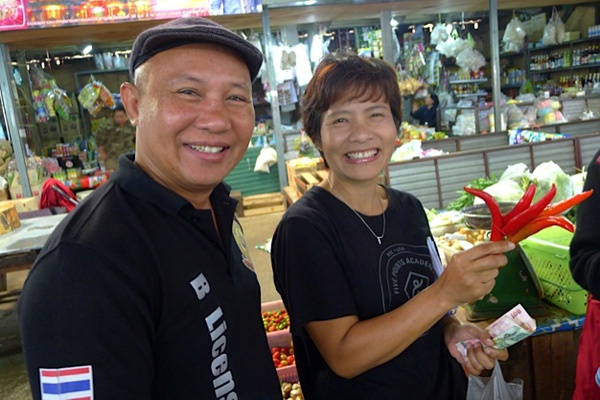 My destination was Lampang, a town in northwestern Thailand. Master Berklerk, an acclaimed former champion, runs a gym that attracts fighters from all over the world, including my NYC trainers. His wife, Ms. Pook, operates a small, open-air restaurant serving regional dishes to a local crowd in a popular nighttime market. I was welcomed to train at the gym, and Ms. Pook agreed to take me on as a student, so to speak, for a five-dish curriculum: green curry, red curry, spicy shrimp soup, pad Thai, and green papaya salad.

I have to make the most of a limited amount of time: ten days total, four of them to travel (two days for the journey each way). I arrive in Bangkok mid-morning on a connecting flight from Dubai, but can't get the right transfer to Lampang until the following morning, so I stay overnight. We reach Bangkok via a modern highway system suffering from rampant traffic jams and gridlock. It's dry in January, so there's nothing tropical to envelop me after the long plane ride.

I drop my bags at a very forgettable hotel (a room, a bed, a squatting shower) and wash my face. I'm starving and can't wait for some real Thai food. Downstairs at an open-air restaurant I found near the hotel, I motion and point, and the result is a spicy shrimp and coconut milk soup, steamed squid with mint, rice, and a cold beer. I could leave now, and the memories would last. 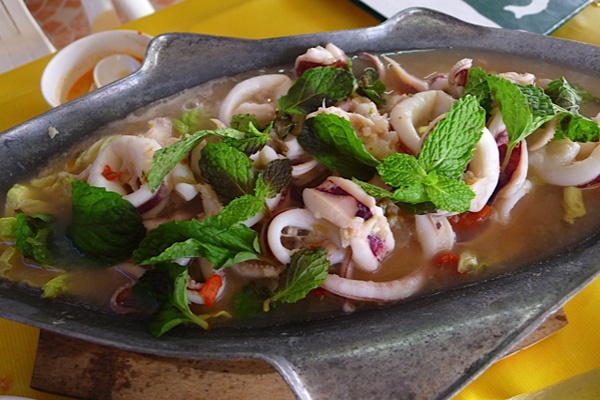 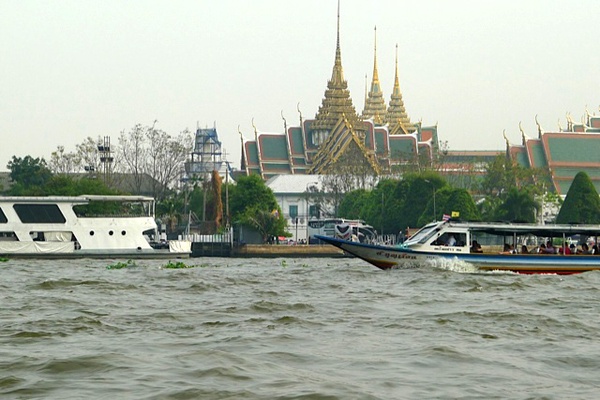 The view from the river.

I'm running out of time, got to keep moving. I take a river boat. No traffic. There's no better way to see the city from the inside. Dead swollen dogs float by the luxury hotels and state-of-the-art hospitals, Buddhist temples. The passing banners and posters and billboards extolling “the promises for your future” — in English — are totally disheartening.

On to the Grand Palace, a temple complex from the 18th century. It must be one of jewels of all Thailand, in an area of Bangkok that is the equivalent of Central Park. Sacred, tended by an army of minders to ensure the propriety of all guests. Ornate, with gold and jade tile work. Overwhelming beauty and complexity. At one point, I was unable to comprehend. I stopped taking photos from a distance and began shooting close-ups, amazed at the craftsmanship everywhere I looked. 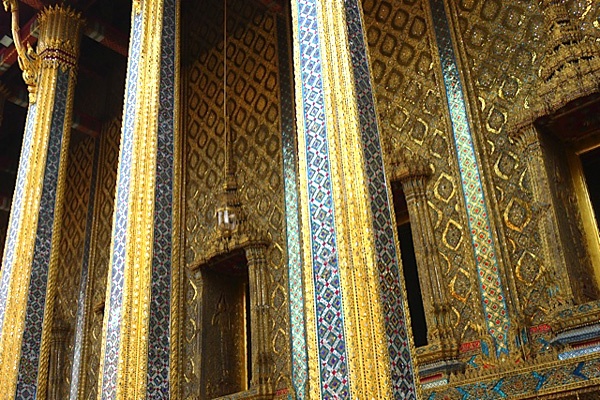 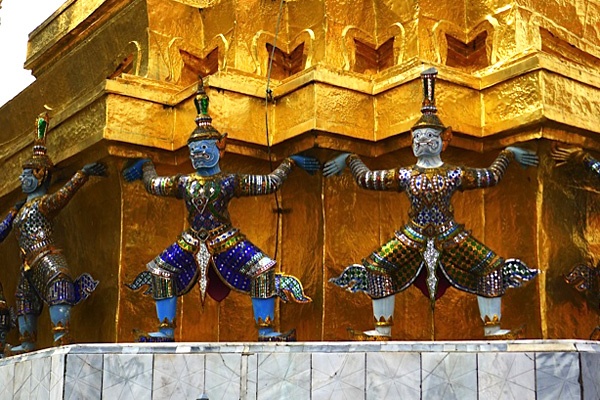 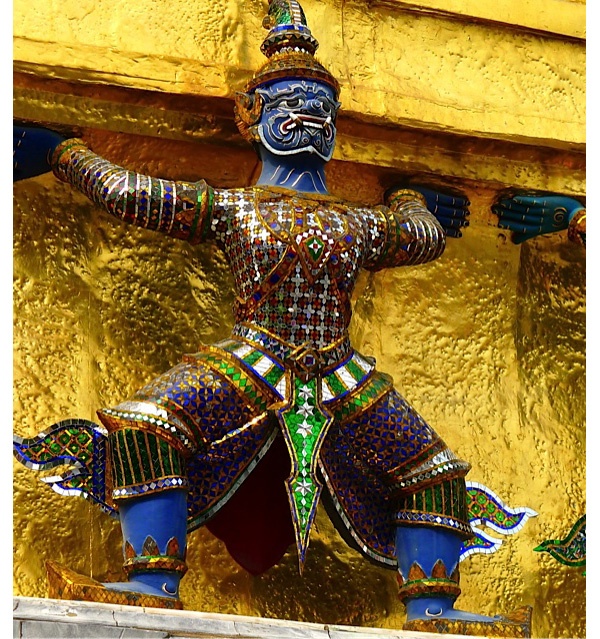 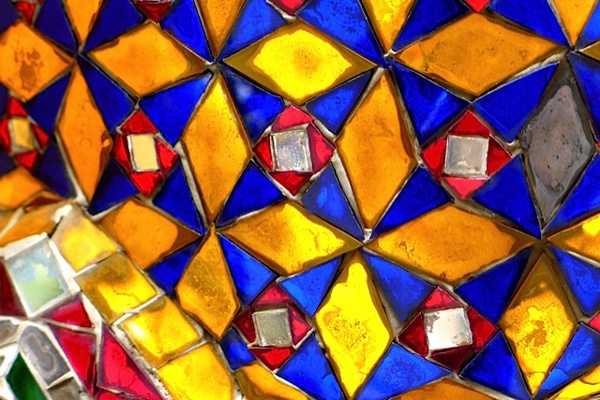 Details from the Grand Palace.

Exhausted after not sleeping for 30 hours, I head back to the hotel for a quick shower. My driver insisted on taking me to dinner and I agreed to meet him at 8 p.m.. It's 4:30, so I'll just take a brief nap and certainly be ready on time. Only I missed his call and slept until 3 a.m., which means I missed dinner and his plans for a tour of the sex clubs. I'm quite happy to have skipped that part of Bangkok.

Up the next morning to a plate of rice with shrimp and basil, chile sauce, clear broth on the side, and sliced watermelon. What a wonderful way to eat. On the way to the airport for my flight to Lampang, my driver insisted that I stop at one of the many jewelry manufacturers. Waylaid by more traffic, the morning aggravated by protesters occupying entire blocks of downtown in opposition to the perennially corrupt but “democratically” elected government. Thailand produces gold and many precious gems, and jewelry production is a major business set up to appeal to the tourist trade. Showrooms and workrooms filled with craftspeople placing precious stones in gold settings: I could have been anywhere in the world. Greeted by colorfully dressed young women offering drinks, I felt out of place. Get me to the airport!

An hour flight from Suvarnabhumi Airport Bangkok takes me to Lampang, a city of approximately 60,000 residents in the northwest. I'm greeted at the airport by Master Berklerk and Ms. Pook. (In the six days I am with them, I never address them by their first names, only by their titles.) Warm and charming both, he with the intensity of a former fighter, she English-speaking with the reserved pride of a local businessperson. To the Palace Hotel (also forgettable) through unremarkable countryside, passing oddly conspicuous big box stores, KFC's, 7-Elevens, and other international businesses along the highway. I don't care. I am in Thailand for the first time in my life. I feel incredibly fortunate.

Lampang is quite unglamorous. Dusty. Lots of manufacturing, no buildings higher than three or four stories. It's not on the normal tourist path. I saw two Westerners in the city the entire time I was there.

My routine is simple: kickboxing at 8 a.m. and 5 p.m.; cooking in between. 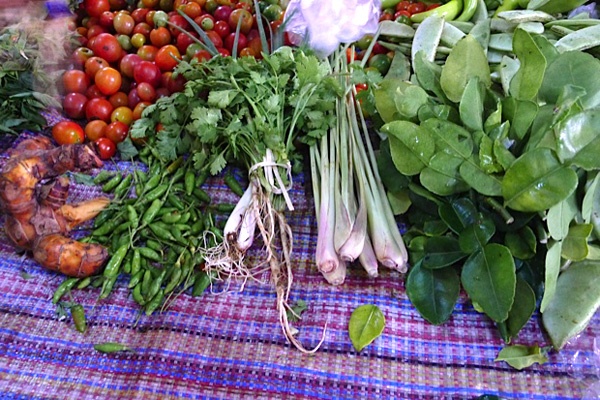 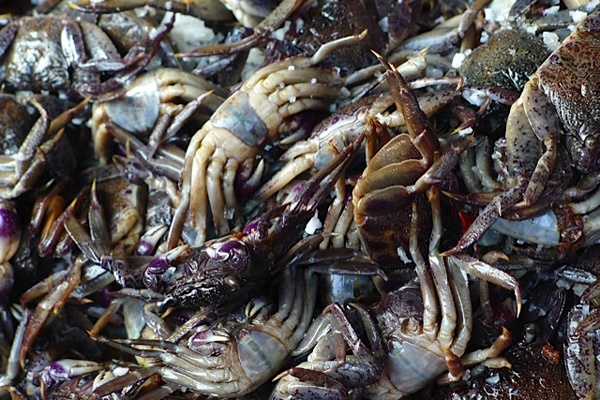 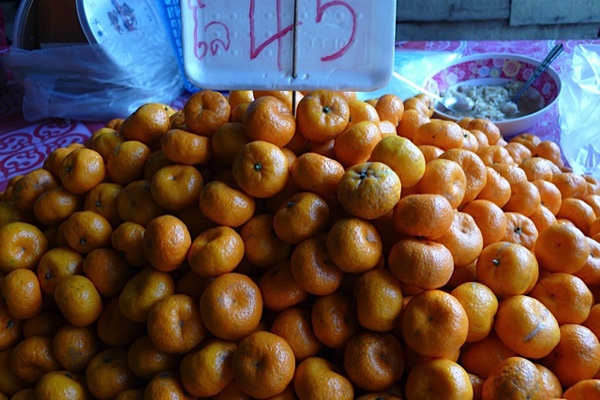 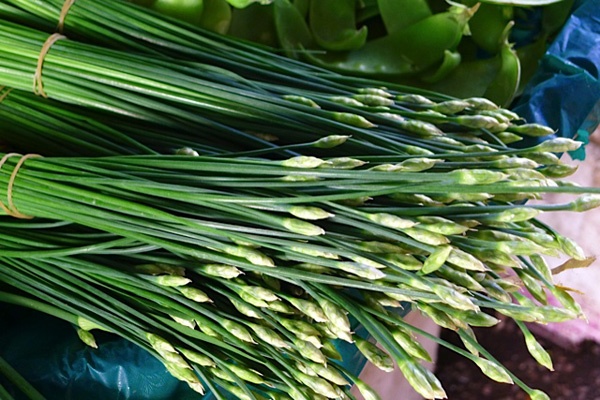 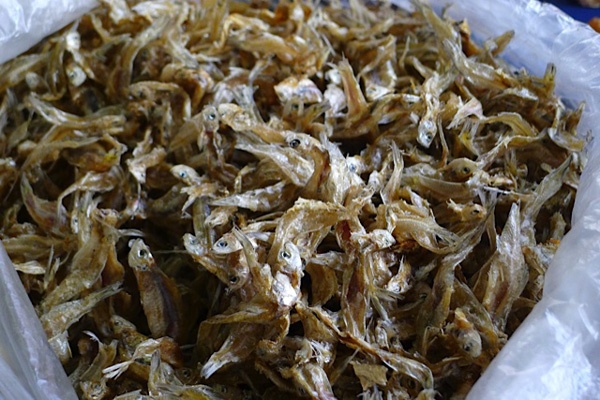 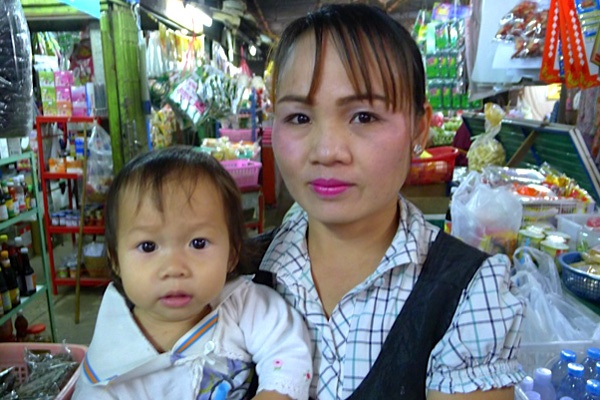 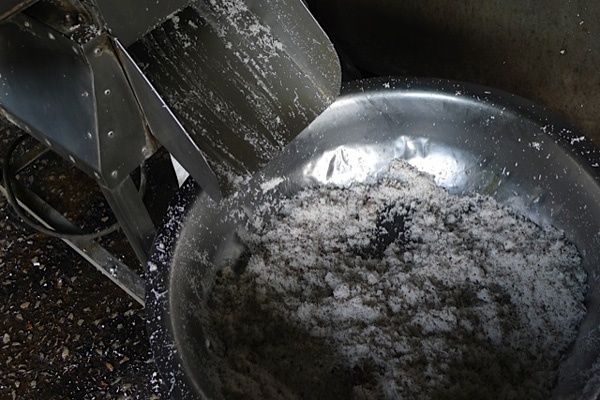 Scenes from around the market. Bottom, the byproduct of griding coconuts into milk.

After morning training, I go to the market with Ms. Pook. Tin-roofed marketplace, open air on all side, 50-pound blocks of ice delivered by bicycle cart, piles of vegetables, herbs arranged in bundles as though they were flowers, grinding machines turning coconut into milk, beautiful engaging faces of venders imploring and curious about this westerner tagging along with a well-known local, bananas alongside sliced fruit, dried freshwater fish, live fish in tubs splashing under a netting, stews simmering seasoned with any number of prepared chile pastes stacked in bowls at the next stall.

Returning from the market, the ingredients are laid out individually like a decorative place setting on small plates or bowls: chiles, Thai lime, basil, garlic, cubed chicken, ginger. Using a stone mortar and pestle, I begin, with her instructions, to prepare a green chile paste for pork curry, red chile paste for chicken curry, spicy shrimp soup, green papaya salad, and a classic version of pad Thai.

We proceed daily in similar fashion, shopping the market with a knowing hello to a vendor. Comments on the quality of produce; sheer expressions of pride. Rice is a hallmark of quality throughout Southeast Asia. Sometimes we have a simple lunch of cold sliced chicken, pork, sausage, chiles in vinegar, rice, stewed vegetables, and poached egg in broth. Every meal is an astonishing display of flavor and simplicity. 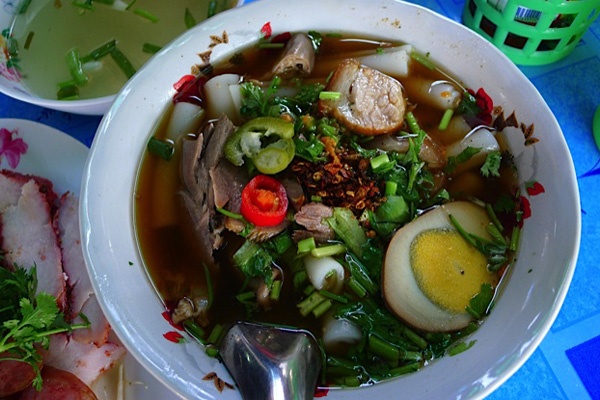 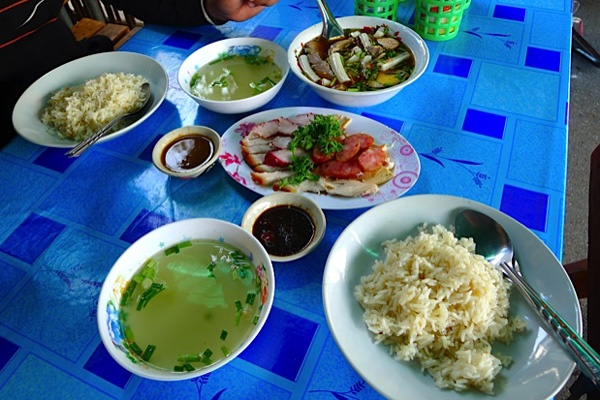 I was here to be an observer — that was the important thing. I've eaten Thai food around New York and have always been intrigued by it. I was here to get a glimpse of how it was done.

In Western haute cuisine, we're driven by an almost scientific level of technique, by the idea that technique produces great results. Here, things come out with such complexity because of the ingredients. The ingredients, the elements, the combinations. Certainly the chile and garlic have to be pounded into a paste, but not in an overwrought, 27-minutes, into the sous-vide style.

My skills as a cook were pretty irrelevant. One night when Ms. Pook was very busy, she asked me to help her with plates and laying things out. Another night, she made me clean shrimp. But I didn't help her with the cooking. 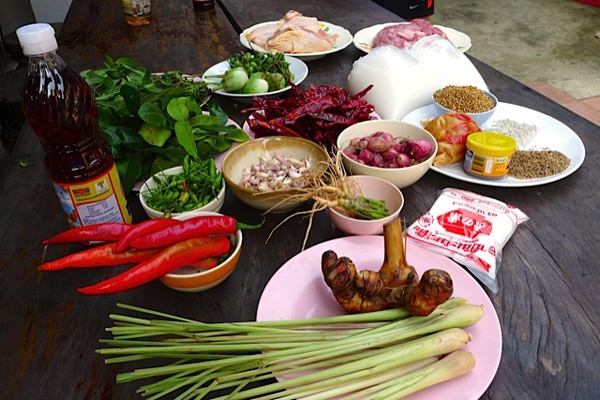 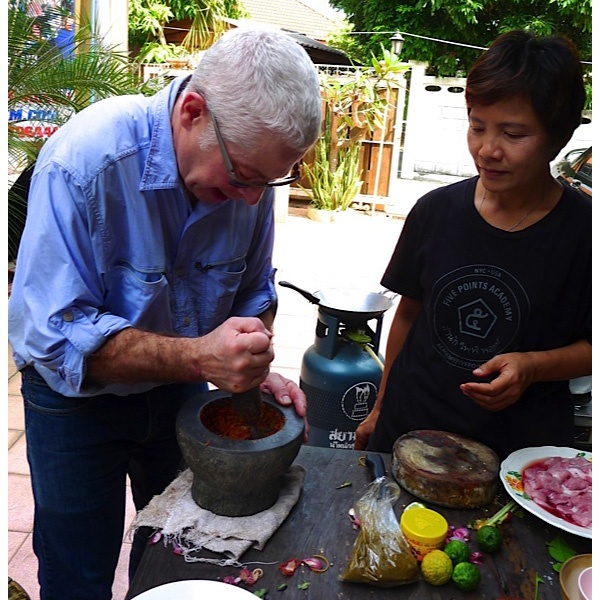 Marc gets to work. 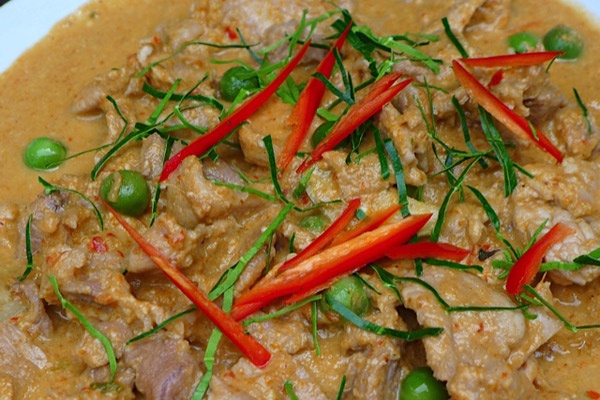 Some customers were curious about the Western chef, some were oblivious. One night, a wealthier looking Thai woman started chatting with me in flawless English. “I lived in Martha's Vineyard for 27 years, but it got so expensive that I moved back home.” Sometimes the students from the gym came by, and the ones who spoke English would engage me. It was very friendly, as though you were sitting at a big kitchen table in someone's house, only we were outside at the night market.

My afternoon workout with Master Berklerk consisted of intense and detailed instructions, striking power so practiced and internalized it could be construed as lethal choreography.

The training is similar to what I do in New York. Muy Thai is technique-based, so there's a structure in stances and arm positions and the way striking movements are done and what you do to make these more or less effective. 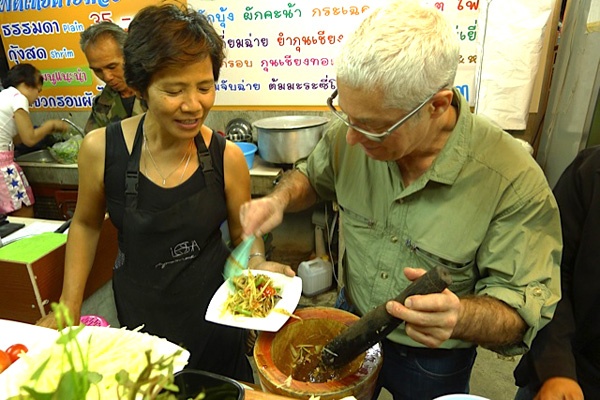 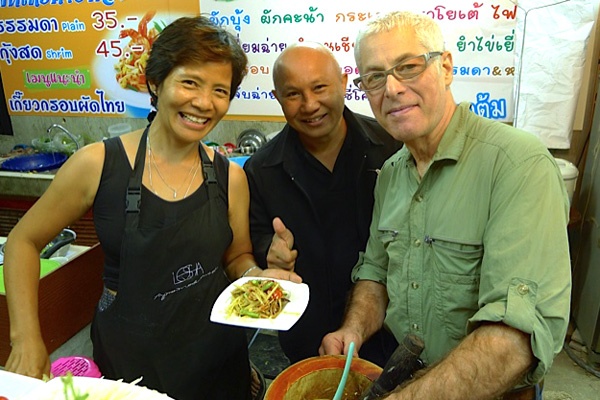 With Ms. Pook and Master Berklerk. 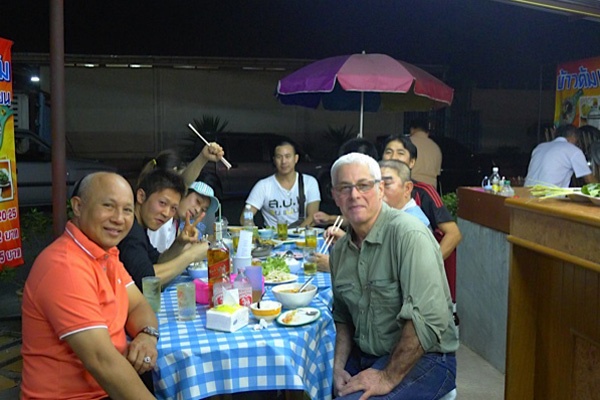 Dinner with the gang from the gym.

There are eight- and nine-year-olds and professional fighters in the gym and everyone in between. Fathers trained with their sons — that was interesting. We don't have that in NYC. Even though the gym has an international complexion, at the time I was the only Westerner.

One guy was extraordinary. You see it when you watch fights from the stadiums on YouTube clips — long, lithe, dynamic bodies with incredible striking power. But this fighter had incredible endurance. I've never seen anyone fight like that.

Feverish travel, simple accommodations, delicious aromas, exquisite tastes, and unquantifiable sightseeing made ten short days disappear fast. But not a moment passed without my thinking about how glad I was that I'd made the time for this unforgettable adventure, one that'd I'd been wanting for so long.

Learning to Carve Fruit in Koh Samui
Wine and Elephants in Thailand
A Chef's Tour of Thailand, Vietnam, and Cambodia