On a trip to Las Vegas with his family, Fathom contributor Daniel Schwartz took every opportunity to explore the local geography off the strip (between pool-side piña coladas and damn good pizza at The Cosmopolitan of Las Vegas). These are his Nevada field notes.

LAS VEGAS – You've had one too many drinks one too many nights in a row. The neon lights begin to lose their luster. The sounds of swirling slot machines, strip club solicitors, and megaclub EDM start to irritate. The price of relief becomes unacceptable — $100 at boozy breakfast, $200 at the spa, $300 at a big-name restaurant. You need a vacation from Vegas.

For me, a low-key kind of guy with a mind full of probabilities, the allure of hitting the jackpot in sin city was lost before I ever arrived. I was booked on a family trip to Vegas and cheerfully planned our six day itinerary. Instead of hitting the slot machines, I snagged a rental car from McCarran and hit the road. And boy did I win big. 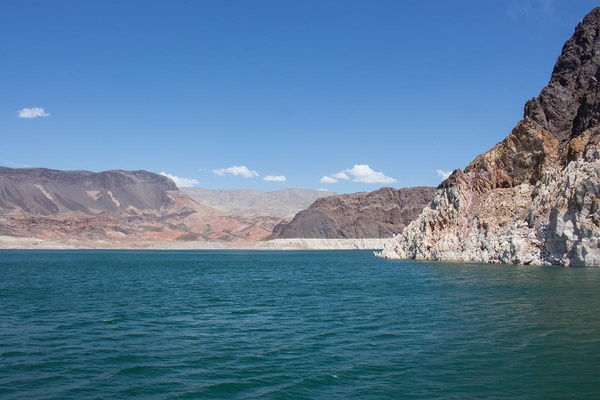 Check the bathtub ring. All photos by Daniel Schwartz.

The largest reservoir in the country by maximum capacity and the water source for every refreshing activity in Clark County is also a beautiful turquoise lake that pools at the foot of the Hoover Dam from the Colorado River. Lake Mead National Recreation Area, which starts at the western boundary of the Grand Canyon and ends at the southern tip of Nevada, has two marinas roughly 45 minutes by car from Las Vegas — Callville Bay Resort and Marina and Lake Mead Marina at Las Vegas Boat Harbor. Both offer boat rentals, RV camp sites, gas, and snacks and can serve as headquarters for outdoor adventures. If you're looking to kayak down Boulder Basin (and get a ground-level view of the Hoover Dam) or camp out on rocky desert swaths, come prepared — the marinas only rent boats, not water-sport gear or camping equipment.

If you didn't come to Las Vegas with gear in tow, plot a course to Lake Mead Marina. Dress cool, bring a hat, don't wear flip-flops, and cover your shoulders. Leave early, pack sandwiches (or stop by the In-N-Out on Tropicana Avenue under the I-15), and bring lots of water — summer temperatures exceed 100°F and food in the park isn't the best. Drive through Henderson instead of Boulder City to avoid delays and enter the park for $10 per vehicle. At this point, you'd be wise to blast some music, zoom past the dehydrated hills dotted with creosote bush, and stop here and there to gaze at the ice-blue water in the distance.

At the marina, take an educational cruise to Hoover Dam with Lake Mead Cruises (day cruises depart at 12 p.m. and 2 p.m.) or hydrate before starting the Historic Railroad Trail, a 3.7 mile hike along the southern edge of the lake that runs through old railroad tunnels and ends at Hoover Dam. And if you got a late start and it's too hot outside to move, enjoy the wind by the water (but watch your hat, it's strong!) and note the white bathtub ring on the shoreline of the lake — that's water level at maximum capacity. 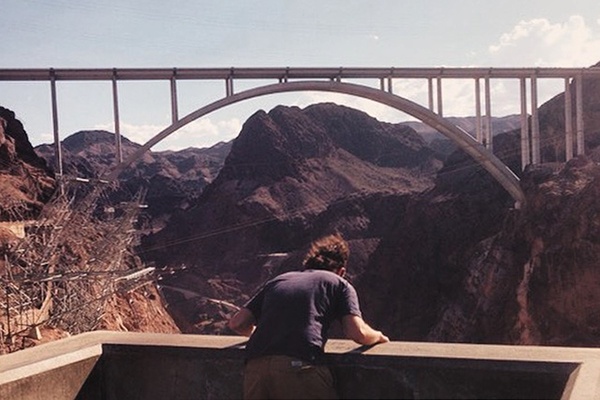 Peeking over the Hoover Dam.

If you're done touring Lake Mead and it's not yet 3 p.m., get on US-93 S towards Hoover Dam. There's a checkpoint at the entrance, so if there are any illegal substances in your car, don't make it obvious. The dam closes at 5 p.m. and the last tours of the dam and power plants (for those interested in history and hydraulics) depart at 3:30 p.m. and 3:55 p.m., respectively. Give yourself at least two hours if you intend on taking both tours. If you miss both, don't sweat it — the views from the dam of the Mike O'Callaghan-Pat Tillman Memorial Bridge above and the Colorado River below are worth the ten-minute add-on (or hour-long drive from Vegas). Stick your head over the side of the dam for a jolt of vertigo. Throw water off the Lake Mead side for a mist shower — the up-draft holds the droplets at eye level before lifting them over the walkway. 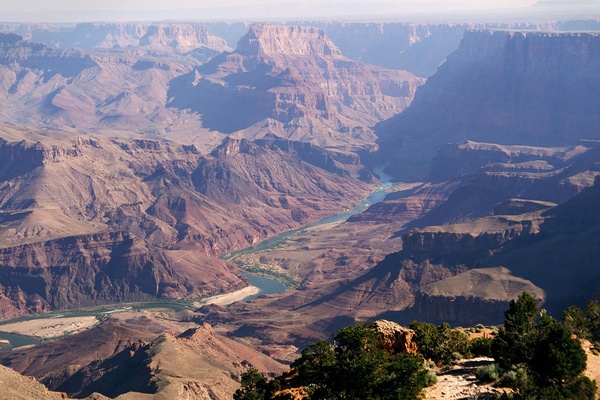 The South and North Rim Villages in Grand Canyon National Park are ten miles across from one another, but they take five hours to reach by car, so pick your final destination ahead of time. Hardcore hikers and campers with time to kill should head to Zion National Park and spend the day in The Narrows, a trail through a river in a thousand-foot deep gorge, on route to the North Rim (open May 15 to October 15). Visitors without GoPros looking for photo ops and user-friendly trails should take the more scenic route to the South Rim (open year-round). The Grand Canyon Skywalk (a horseshoe-shaped glass walkway that projects into the canyon) is located outside the national park on Hualapai territory at Grand Canyon West, closer to Lake Mead but not on route to either of the rims.

You'll want to pack a sweater (daytime temperatures on the rim hover at 70°F and evenings are chilly) and leave early (like: 7 a.m. early). Google Maps estimates the trip to either rim at 4.5 hours, but you'll want to stop a few times to shake fatigue and eat (there's an In-N-Out half-way in Kingman), so add another hour. Even if you don't mind driving back through pitch-black desert — it's safe, the roads are outfitted with reflectors, just keep an eye out for wildlife — look into staying the night at either of the villages (check out the in-park lodging options) or in a nearby town (these are the closest hotels to either rim). The canyon is breathtaking (my mother cried when she saw it) and deserves more than a few hours.

At the South Rim, follow the crowd from the village (which has restrooms, food, and information on ranger-led outings) to Mather's Point and crawl to the edge of the canyon cliff. Continue along the Rim Trail and watch the stripped rock silhouettes change under the falling sun. Hop on a shuttle and explore the hiking trails that diverge from the stops along the rim. If you're at the village with thirty minutes before sunset, drive east to Desert View. The Puebloan-style watchtower has great views of the canyon, but the best way to take in nightfall is on a rock at the tip of an unmarked trail that starts behind the fence in front of the tower. With dim light trickling in from the west, the Colorado River flowing in from the north, and the Painted Desert splayed out to east, it's impossible not to feel tiny in the best way possible. 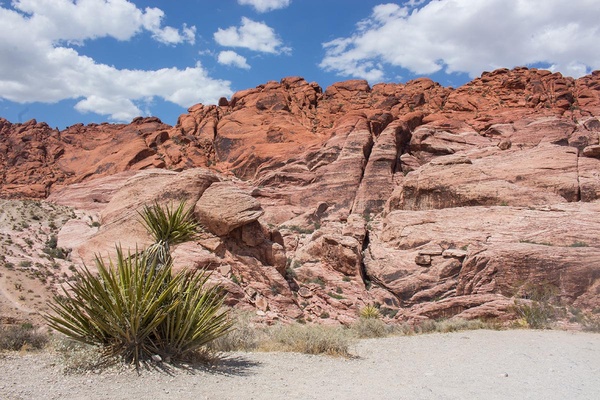 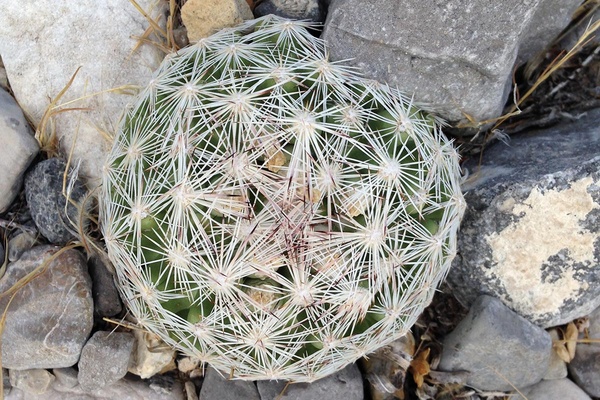 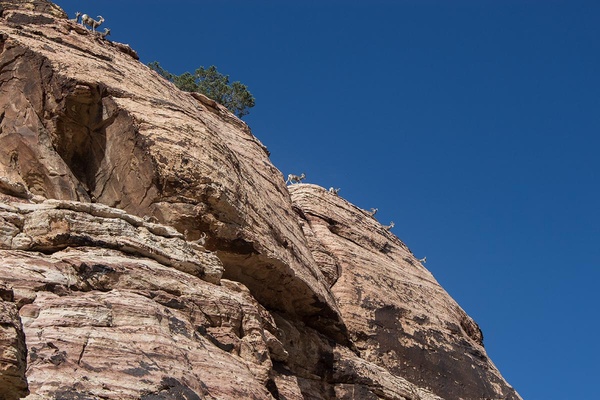 A family of bighorn sheep.

If you have an unobstructed westward view from your hotel room, you can see Red Rock Canyon National Conservation Area. The drive over is half-an-hour and the thirteen-mile one-way scenic road that loops through the area is perfect for a short sightseeing drive, an early bike ride, or a half-day hiking trip. The bright rock formations at Calico Springs and Sandstone Quarry (the first few stops on the loop) are condensed sand dunes colored by millions of years of mineral deposition. The natural grooves in the stone make for easy rock climbing and the view of the mountains nearby make the top of any high rock the perfect place for a short meditation session. Hop on a hiking trail for a lesson in desert biology. Look for Mojave natives like burros, lizards, and tortoises. Search for agave, yucca, and the pretty pincushion cactus. Be mindful of tarantulas, snakes and scorpions. And remember, everyone's trying to conserve water — you'll find no more than plants, desert holes, and the occasional squirrel at high noon.

Depart early, wear closed-toe shoes and sunscreen, and bring jugs of water. Early morning is prime time for hiking and rock climbing, as mid-day temperatures can soar past 100°F and typically peak at 5 p.m.. If you're visiting Red Rock to detox, you'll probably miss your a.m. window. Drive to Willow Springs Picnic Area and search for petroglyphs at Lost Creek or bighorn sheep on rock ledges. The former creek bed, blanketed in shadows by the surroundings hills, is noticeably cooler than the rest of the canyon. 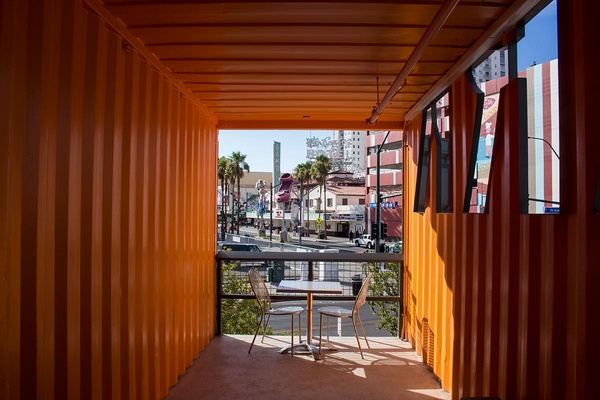 The historic El Cortez Hotel and Casino from inside Downtown Container Park. 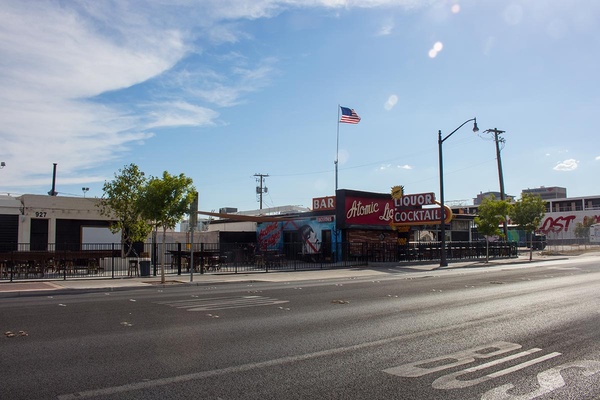 Too early for Atomic Liquors on Fremont Street. 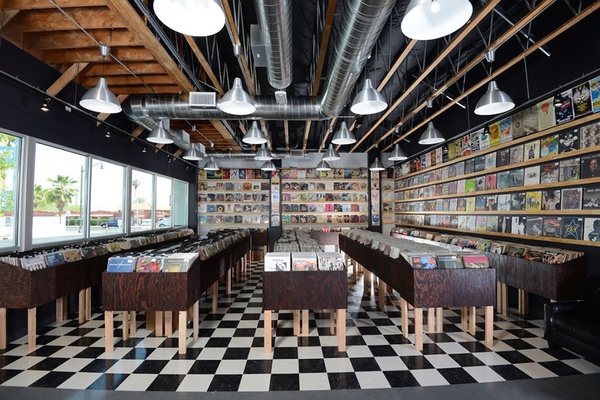 Sleep in for this one (you deserve it). Get on I-15 N and off at exit 75A. If you plan on drinking the night away, hop in a $30 cab or board the northbound Deuce (service never stops; check out the bus stop map). You'll want to explore the Arts District (especially if it's the first Friday of the month), because food trucks swarm the neighborhood, local artists display their work, and booze flows from all participating establishments. But before you gallery hop, park by S. Maryland Parkway and take a walk on Fremont Street due west.

Start at PublicUs, a canteen-style cafè under the direction of Seattle coffee professional Cole McBride, and buy yourself a locally sourced treat and an espresso served in a Glencairn whiskey glass. Down the block, sift through vinyl at 11th Street Records or look through anatomical animal models and cute stationary at The Writer's Block Book Shop, which has an original letter press at the front and a resident bunny in the back. If it's late enough, grab a drink at Atomic Liquors, the oldest freestanding bar in Vegas and a memento of the atomic-obsessed era.

Look for a quick bite between the boutiques at Downtown Container Park, an open-air mall made of old shipping containers. Then, wander into Emergency Arts and peruse hundreds of zany zines written by University of Las Vegas students. If the humor gets too dark, grab a beer from The Beat Coffeehouse out front and check the live music line-up.

When the sun goes down, the overhead LEDs at Fremont Street Experience light up. The pedestrian strip is lined with old casinos like The Golden Nugget and The Fremont Hotel and littered with street performers, frozen slushie bars, half-naked dancers, and cheap buffet deals. Avoid this madness and hop on the Slotzilla Zip Line if you must see this side of old Vegas.

For dinner, chow on veal meatballs covered in foie gras cream at Carson Kitchen or grab a curry and stay awhile at the beer garden at Le Thai. Chat up a local over a cocktail by the fireplace at The Griffin, and if things go well, move into their back room and bump to whatever the DJ is spinning. With any luck, the two of you will have room for a sundae at Luv-It Frozen Custard before the end of the night.

Rent a car at McCarran airport. The rates are some of the cheapest in Vegas. The Rent-A-Car center is three miles from the airport and is accessible by blue-and-white shuttles from posted stops at both terminals. And parking is free at all strip hotel garages. Hooray!

If you don't want to drive, contact concierge to schedule a helicopter or bus tour. Or schedule one yourself with Pink Jeep Tours. Don't try to take a taxi to Red Rock and walk the loop by foot (the heat can kill). And don't expect to explore Lake Mead National Recreation Area (tours only take you to Hoover Dam).