Fathom has teamed up with Lincoln Motor Company on Hello Again, a series about the non-traditional hotels in interesting places. This time we're going deep into the Colorado Rockies to Dunton Hot Springs, where old miners' cabins are reborn as luxurious mountain hideaways.

DOLORES, Colorado – Colorado is a traveler's dream of contrasting pleasures, a place where stark and majestic mountains nestle up against swanky ski towns, where a rugged and lawless history has evolved into a pampered and relaxing present. Nowhere is the Colorado paradox more apparent than at Dunton Hot Springs, a hotel consisting of old miners' cabins that have been restored and transformed into luxurious accommodations.

Guests, like so many pioneers before them, will be struck by the beautiful setting of nearly 1,600 acres filled with waterfalls, hot springs, two rivers, and the San Juan Mountains. A "cabin" may seem like a modest accommodation, but 13 cabins at Dunton are anything but, with features like wood-burning fireplaces, claw-foot bathtubs, rain-forest showers, and heated floors.

Depending on the season, you can while away your days at Dunton riding horses, mountain biking, fly-fishing, river rafting, kayaking, showshoeing, and heli-skiing. You might spot bald eagles, moose, black bears, beavers, elk, and lynx in your wanderings. They live here, too.

Or, if that's too taxing, you can just do nothing more than spend an hour soaking in one of the six mineral-rich hot springs around Dunton, and maybe follow that up with a river rock massage at the spa. Mealtime will bring you to the antique communal dining room table in the Saloon. First one to see where Butch Cassidy allegedly carved his initials wins.

Because around here, the mythology of Wild West lives on. Dunton's owner, Christoph Henkel, made his way here from Telluride unexpectedly a few decades ago, discovered the run-down hotel in a former ghost town, and bought Dunton pretty much on the spot. It's not hard to imagine that he must have been inspired by the intrepid spirit of the miners who were the original guests in these cabins in the late 1800s.

The cabins are arranged around the Saloon and Dance Hall and vary in size from one to five bedrooms. The entire property — Dunton is technically its own town — can accommodate up to 44 guests and is often rented out for weddings and special events. Many cabins are the original ones built by miners more than 100 years ago. They have been restored, furnished with the owners' own accessories and décor, and updated with modern amenities like heating and WiFi. 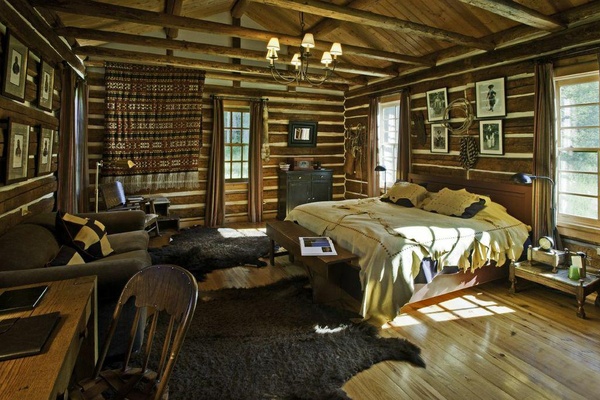 Inside of Major Ross Cabin.

The cabins are all cozy, with brightly patterned textiles and lots of wood throughout, each with a special charm. Well House has its own hot spring and cold plunge pool. Echo Cabin has an outdoor shower. Vertical Log has an antique copper tub and a nearby waterfall and can sleep up to six people. Romantic Dolores Cabin has a Rajasthan wedding bed. Dunton Store Cabin, the original General Store of Dunton, has framed American West movie posters and a wood-burning fireplace by the bed. Potter House, which sleeps up to ten, has incredible mountain views and two trout ponds.

Rounding out the property are the Library Cabin, which has a bearskin rug and enveloping armchairs, and the Chapel, an open-air cabin beside the waterfall that is the very definition of Eden.

A cabin in the mountains at Dunton Hot Springs.

Dolores Cabin— a romantic cabin with a Rajasthan wedding bed.

A bedside fireplace, a book, and American West movie posters... who needs WiFi?

If nature's making you feel dirty, take an outdoor shower in the back.

A well-furnished room with bearskin rugs and heated floors.

Tip the mountain lion in the back for sharing the place.

Folllow the stone path to the nearby waterfall.

Unwind in the steamy tub at Well House.