Nothing makes you feel young on your birthday like a evening spent among very old things. During a trip to Italy one fall, Fathom founders Pavia Rosati and Jeralyn Gerba explored a centuries-old retreat in the Apennine Mountains and stayed to celebrate.

SPOLETO, Italy – If you could have your birthday dinner anywhere in the world, where should you?

I will tell you.

Go to the Umbrian region of Italy, to the small medieval town of Spoleto. High up on a wooded hillside in Monteluco (population: 27), beyond an Ancient Roman aqueduct, on the same route Francis of Assisi walked on his way to sainthood — you will find a residenza d'epoca, a former hermitage stuck in time.

An old encampment for religious recluses wasn't what I originally had in mind for my birthday blowout. Then again, I was living in a medieval Italian village at the time, and party options varied slightly from those at home in New York. A friend in Spoleto told us about a beautiful hidden retreat known only to locals; the next morning we set out on a hike to find it.

We climbed up and up. Over the crevass, through the woods, guided by trail signs like modern-day pilgrims. Through the trees we saw a faded yellow building and hints of a turquoise pool. The proprietess, Valeria, greeted us like old friends, surprised to see two inquisitive (and sweaty — it was a steep hike) American daytrippers. She showed us around. 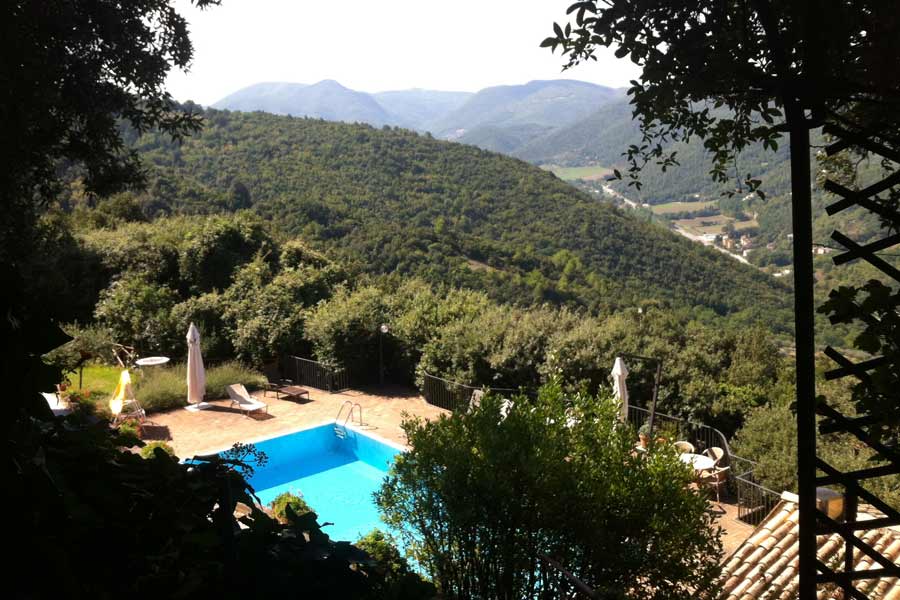 A peek through the trees. Photo by Jeralyn Gerba. 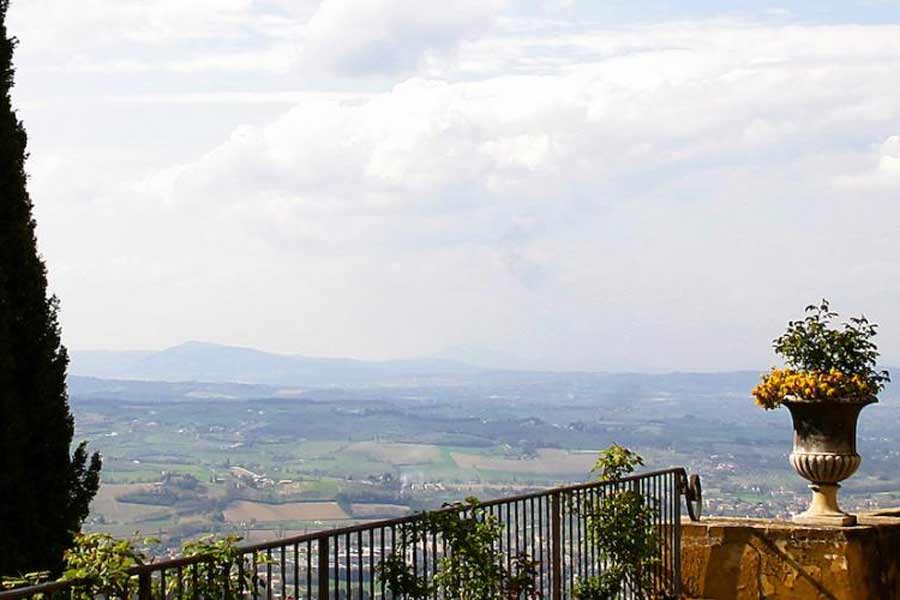 Eremo Delle Grazie had all the things I fantasized about in my Italian daydreams: crooked hallways filled with furniture, framed maps, pictures and drawings made by the monks and collected over the centuries. A library of old books with a parlor and a fireplace. Ten frescoed monk cells that have been converted into suites with modern bathrooms and are named after Italian friars. A tiny chapel painted with scenes from the life of Mary. Ancient bottles in a cave, the oldest structure on the site. Terraces and a pool with sweeping views of the Umbrian landscape.

Way, way back in the 5th century A.D., a saint on the run established a home in these woods in the cave that is now the wine cellar. It became a spiritual retreat and, later, a monastary for the Hermit Fathers of Monteluco. The site became so well known that powerful cardinals stopped by to meditate and drink wine. Even Renaissance celeb Michelangelo spent time there (he wrote a letter to Vasari about it).

Its current incarnation goes back to 1918, when Valeria's great uncle Arrigo Piperno, a dentist whose patients included Pope Pius XII, the royal family, the poet Gabriele D'Annunzio, and Mussolini himself, bought the place before there was a paved road to reach it. It remained a private family retreat until 1991, when Valeria's father converted it into a small historical inn — the first of its kind in Umbria and the first to be labeled a residenza d'epoca.

Learning the back story felt like big present, but we came up with a great excuse to go back: my birthday dinner. At twilight, we made the trek through the woods, husbands in tow, and it was dark by the time we reached the estate. There was a fire in a hearth on the terrace, which we practically had to ourselves. 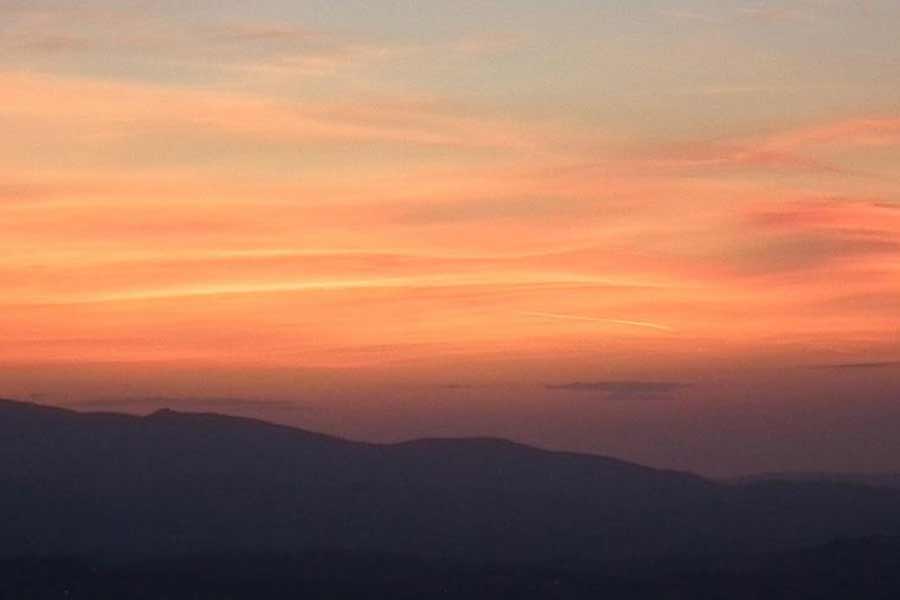 September is the beginning of truffle season in the region, and the menu reflected the bounty. We ordered and immediately devoured a plate of delicately scrambled eggs flecked with bits of the black tartufo and drizzled with olive oil. Boar sausage and proscuitto followed. As did broad ribbons of handmade pappardelle made with a sauce invented to appease invading Goths in the middle ages. Wine from nearby Montefalco. A second plate of pappardelle. The chef came to the table with espressi and we threw out exclamations: the pasta! the vegetables! the truffles! It was clear we could not contain our excitement. The chef told us he was moonlighting for Eremo. He asked that we not mention his name back down in Spoleto, the town at the bottom of the hill, lest the other restaurant he worked for find out about his gig in the woods. (His identity remains safe with us.)

It was too dark and we were too full to venture back home on foot. Our waiter took off his apron and gave us a lift — one more gesture of hospitality — and we spiraled down the limestone mountain, the night swallowing up the hearth, the terrace, the hermitage behind us.