Food writer Shane Mitchell and photographer James Fisher traveled around the world gathering stories and recipes from local cultures with longstanding culinary traditions for their new book Far Afield. In this excerpt from the first chapter, Shane makes her way through Rajasthan.

In Rajasthan, many professional drivers decorate their vehicles with "Horn Please" warnings; statues of Ganesh, the godly remover of obstacles; and colorful tassels intended to repel raging demons. They have good reason. Years before, another driver revealed the secret to successfully navigating the back roads of India: "You must have three things on your side," he claimed. "Good horn, good brakes, good luck." It became my mantra.

Wheat was ripening on the flood plains when I arrived in Godwar, a marginal province of Rajasthan between ancient city rivals Jodhpur and Udaipur. Women tossed sheaves into bullock carts that lumbered off to threshing grounds. It is grueling labor, made almost unbearable in the months before monsoon with the arrival of a hot wind known as the Loo. Some call it the devil's wind. It rises unbidden from deep in the Thar Desert, bringing destruction and madness. So the harvest is hurried. This grain came to India by way of the Levant, around 6000 BCE. Flatbreads integral to the northern Indian diet — naan, papad, paratha, roti, puri, chapati — developed as a result.

Riding in the back of an open Jeep steered by the angular young Kapil dressed in starched paramilitary khaki, we circled mounds of tan chickpea plants drying in the sun. Black-faced monkeys hung together near the entrance to a cavernous shrine. Young girls pumped water into clay pots at a village well. A boy pushed along a rubber tire with a stick, a load of firewood balanced atop his head. A Hindu priest wearing a white tunic slowly descended a long flight of stairs cut into the hill where, moments before, a leopard perched. The people of this region seem to have a concord with large cats — no one has been attacked for ages, although dogs go missing now and then. Godwar isn't far from the original setting Rudyard Kipling intended for The Jungle Book.

My tailbone ached and my face felt as hot as a ghost pepper. Turmeric stained my fingers from the fritters bought for breakfast at a street stall. My left foot itched from a possible infection. Just when I couldn't take anymore, an overcrowded bus roared toward us from the opposite direction. Men clung perilously to baggage on the roof and, as we swerved, tossed something down at us. Accustomed to being the target of nasty projectiles in more hostile situations, I flinched. Flower petals rained down on my head.

A cheer went up from the passengers, all waving and laughing at the successful prank as the bus moved on. They left us where we had pulled over, by the side of the road, bemused. 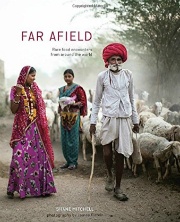