Orange County may be known as a glitzy (at times obscenely so) pocket of wealth, but as Los Angeles writer Jessica Ritz discovered on a road trip with her family, it's more interesting for its beaches, ships, and intricate Lego offerings.

ORANGE COUNTY – Southern California doesn't have the sharply defined urban/suburban/rural boundaries that we're used to throughout the United States, but locals know that doesn't mean it's one monolithic blur. Orange County lies directly south of Los Angeles, yet is distant enough that when I was a kid, my friends and I would refer to heading south as going "behind the Orange Curtain." (A dated reference and a less common joke these days.)

The major attraction here is a certain Magic Kingdom, the destination that has accounted for most of my family's visits. What I never realized until recently is that Orange County's beaches and seaside towns are a world away from the L.A. grind — a perfect airport-free getaway for the family. 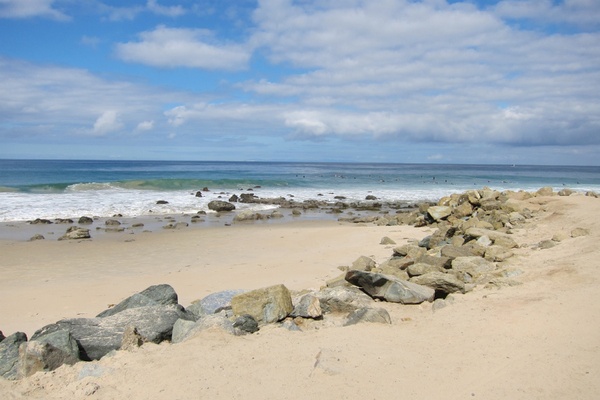 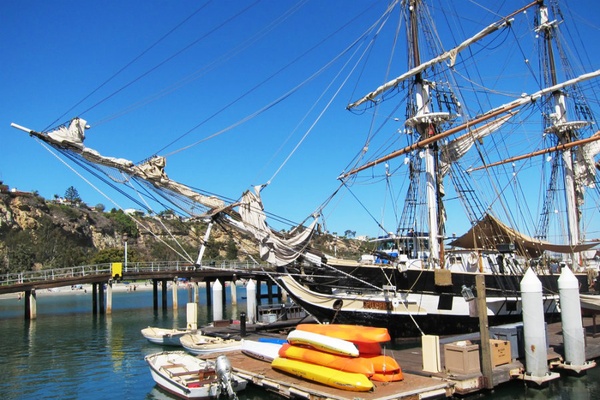 All aboard the Pilgrim Ship.

FUN ON THE WATER IN DANA POINT

My family and I were winding our way down the coast from the southern end of Laguna towards Dana Point when my precocious seven-year-old noticed that "all the houses look the same!" He was right — architectural and cultural heritage tourism is definitely not the main draw in these parts. In a region known for its gloss and sheen, the key attraction lies outward. It's all about the Pacific Ocean.

The harbor at Dana Point is a marina where chilled-out locals park their boats and practice stand-up paddle boarding. This is an ideal port of departure for whale-watching excursions and trips to Catalina Island. We struck out spotting the native grey whale on our expedition, but the pod of dolphins swimming in the wake alongside our boat made up for it with a spectacular display.

The Ocean Institute is a hands-on learning organization that operates the Pilgrim Program and incredible summer camps. Its location-sensitive contemporary buildings designed by Bauer and Wiley Architects stand apart from the man-made and natural surroundings in the best possible way. Tallships, large traditionally rigged sailing vessels that kids can climb aboard, are the Institute's main attraction. Pilgrim is a replica of the famous 1825 brig that voyaged westward on commercial missions from Boston. Spending a night on the ship is a rite of passage for all Southern Californian kids. My own memories of the ship include making sloppy gruel and coffee for the crabby captain and keeping watch in the middle of the night. (It wasn't as exciting as I had imagined.) Let's just say I didn't beg to revisit, but it's a fun and educational stop for the kids.

Nearby Baby Beach at Dana Cove Park (34551 Puerto Pl.) is known for its contained area, calm waters, and low-intensity waves. It's a perfect the place for kids to splash around.

Back on the north side of Dana Point along the environmentally pristine and surfer-intensive Dana Strands Beach, our knowledge of ocean safety was put to shame watching the Orange County Junior Lifeguards run through their drills. They take their beach recreation very, very seriously. Famed Monarch Beach off of Monarch Beach Drive to the north is a bit more exclusive, although all beaches are public. 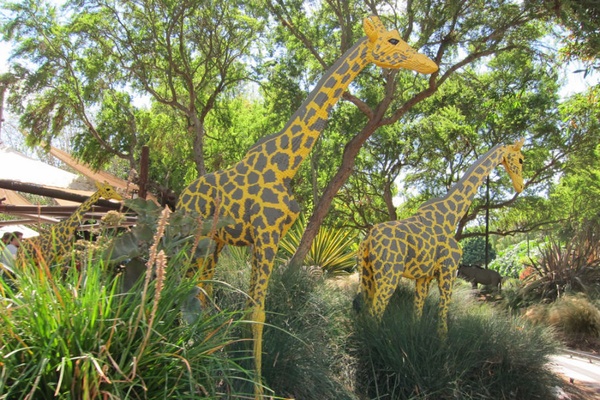 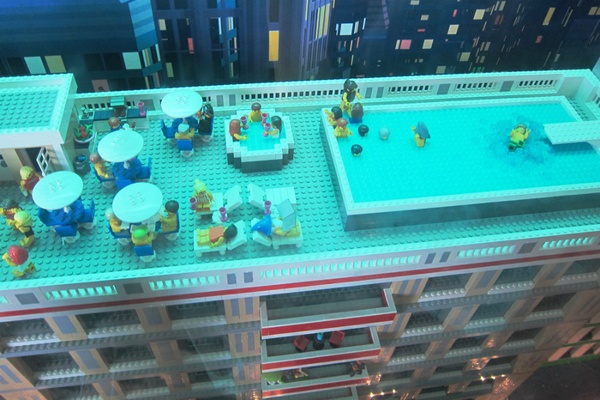 It's a Lego rooftop party.

We stopped to meet up with family in historic San Juan Capistrano, famous for its Mission Landmark and Museum. But we were just killing time on our way to the main event of the road trip: The long-awaited visit to the Legoland complex, located 30-some miles away in Carlsbad.

In anticipation of a serious dose of theme park Americana, I threw in an overnight stay at schmancy and tranquil Rancho Santa Fe with friends. On the day we reached Lego brick nirvana, I insisted we stop for breakfast at local hotspot Lofty Coffee in the hip, beachy town of Encinitas. The fit, sporty, and spiritual crowd, not to mention the quality coffee, French toast, and poached eggs, perked me up for the day that lay before me: endless Legos and little boys with too much adrenaline.

While I was the grump wrapped in a black cashmere sweater and dark gray fitted cargo pants at the Legoland Water Park, everything about the kid-centric Legoland Hotel stay and our 30 hours at the park completely won the boys over. (Never underestimate the power of a built-in electronic floor whoopee cushion.)

For Vegas-phobes such as myself, Legoland is a relatively contained, family-friendly way to indulge in brash, American escape fantasy impulses. (Although the incessant clatter of Lego bricks did remind me of the constant clean-up battles I face daily.) Thankfully, the Legoland Hotel's Skyline Café has one of the more essential bars I've ever enjoyed.

And although I haven't yet made it to Africa, I can now say that I've ridden Safari Trek and have come within inches of Lego-made wild animals. My seven-year-old son declared our two days in Carlsbad to be "better than New York," which for him is the highest possible compliment. 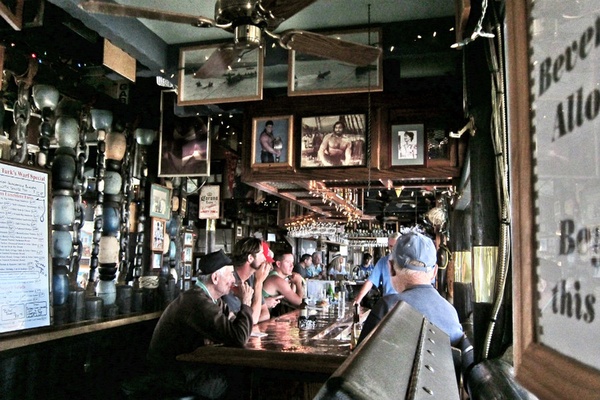 Down to earth locals grab a beer at Turk's. 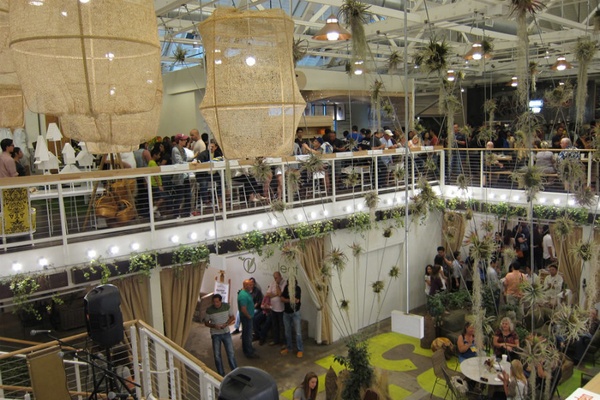 Raya at the Ritz Carlton has partnered with chef Richard Sandoval's network of modern Latin-inspired restaurants. The fusion menu includes a stellar ceviche duo with ponzu-marinated ahi tuna and rock shrimp, and a seafood-enhanced sweet corn soup emboldened with a dollop of huitlacoche puree. You'd be hard pressed to find a more elegant mini-lobster taco in existence.

For local flair, Aurora's Taqueria on the Pacific Coast Highway serves grilled fish and carne asada tacos that will only set you back a few bucks. The attached grocery store specializes in Latin American products if you want snacks for the journey.

To escape all that is shiny and new along the Orange County coast, pop into Turk's at Dana Wharf, a retro joint with a jukebox and an eclectic assortment of signed celebrity photos and memorabilia. You're sure to see characters that definitely won't be starring in a Real Housewives of Orange County episode anytime soon.

On our drive down the coast, we detoured to Brodard Chateau in Garden Grove's Vietnamese enclave for a lunch of vegetarian pho, roasted pork rolls, and lemongrass steak vermicelli bun. On the way back, we stopped in downtown Anaheim at the new and stunning Anaheim Packing District Food Market Hall, an outstanding adaptive reuse project in a historic Sunkist Citrus packing house. The complex includes a public park and all types of seating options, so it was an ideal place for the kids to burn off the energy they shockingly still had left after two days at Legoland.

The Ritz-Carlton Laguna Niguel lives up to its rep, with deluxe rooms decked out in a calming grey-blue motif that befits its beachside location. The ocean views are killer, even from the gym, so don't forget to bring the right gear — this is one place where you will actually want to get in a workout. The on-site Eco-Adventure Center is a great way to engage the kids in the natural environment (and leave them for a few hours of much-needed mommy time).

Laguna Cliffs Resort & Spa Marriott is both more reasonably priced and conducive to family travel. Its large pool area includes the Kids Splash Zone kiddie pool and water play area. Nearby Laguna Coast Wilderness Park makes for a fun pit stop on the way. Good to know: The resort's cliffside location on Doheny State Beach makes climbing down to shore a little trickier if you have little ones and beach gear in tow. 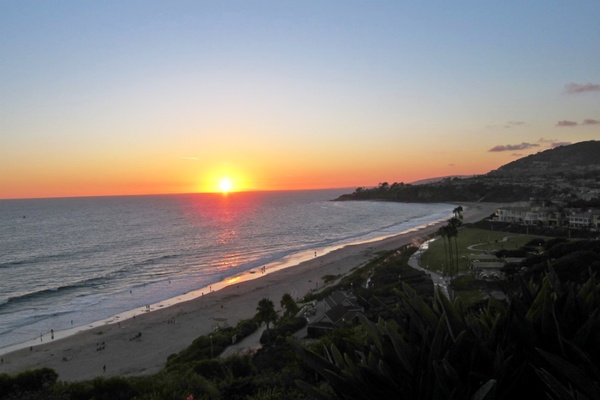 FLY: I was on a road trip from my home in Los Angeles, but if you're flying, the nearest airport is John Wayne Airport in Orange County (SNA). San Diego International (SAN) and Los Angeles County (LAX) are within one to two hours by car.

DRIVE: Laguna Beach, Dana Point, and the main Orange County coastal areas are accessible from the 5 Freeway. The Pacific Coast Highway will get you there on a far more scenic but slower route. Amtrak Surfliner connects the major Southern Californian towns, but having a car is essential to explore beaches, towns, and other scenery along the way. Plus, road tripping with the kids is always a blast.

To quote the ubiquitous, oft-repeated theme song to the The Lego Movie, "Everything is awesome" in the weather department here.

BEST OF THE WEB