We couldn't stop paging through Emiko Davies' new cookbook Acquacotta. The photos of the finished dishes are just as dreamy as the many shots of coastal Tuscany. Davies was kind enough to share a recipe for her cookbook's namesake dish.

This book is an ode to a beautiful sliver of the Maremma, in the southernmost part of Tuscany, where I lived for six months in 2015 with my daughter and my Tuscan husband, Marco, while he was working as head sommelier of Hotel Il Pellicano's renowned fine dining restaurant. We made our home in the pretty little fishing village of Porto Ercole, the smaller but more ancient of the two towns on the rugged, island-like promontory of Monte Argentario. A few kilometres away is Orbetello, with its lagoon and its strong Spanish history. The island of Giglio is a short ferry ride from there. And a quick drive down the road is the beautiful town of Capalbio, the last Tuscan town on the border of Lazio.

It's a little corner of paradise known locally as la Costa d'Argento, the Silver Coast, supposedly named for the silvery shimmer of the salt and pepper sand that you find in these parts, along the Tyrrhenian Sea. A little further inland are the towns of Saturnia, with its pummelling natural hot springs; and Pitigliano, a stunning and ancient town seemingly carved out of the tuff rock it sits on, with a long and significant Jewish heritage.

This is a region of wide open spaces, swaying wheat fields, hills polka-dotted with olive trees, rambling vineyards bearing native grapes, overgrown fig trees and rampant prickly pears, long beaches and wild animals. Little villages sit perched, relatively undisturbed, on their hilltops with views of the sea — their roots stretching back to the most ancient of all Tuscans (the Etruscans). Closer to Rome than Florence, this stunning corner of the Maremma has a cuisine influenced largely by fishermen, hunters, farmers and butteri (cowboys). Straightforward, thrifty and fully dependent upon its landscape of sea and hills, it's rich with history and flavor. And it is unlike any other in Tuscany.

One-pot dishes are a preferred way of cooking in the area, and whether it's a seafood or lamb stew or a soup of vegetables and a poached egg, it is food that I love to eat and love to cook — comforting, low-maintenance, and easy to prepare. Much of it is born out of poverty, which means there also happens to be a surprising selection of vegan and gluten-free dishes. It's also food that calls for sharing with friends or family, gathered around a big table with plenty of local wine and good conversation, perhaps finishing with a homemade digestivo made from foraged herbs. Like most peasant cuisine, it's about getting the best out of a few ingredients and providing a belly-filling and nutritious meal that not only doesn't cost the earth but is simply delicious.

Acquacotta is a true peasant dish. Fishermen of another time may have added a piece of long-lasting baccalà (dried salted cod) or some cheap but tasty fish brought in with the catch — the sort of fish that maybe never makes it to the market. But this is a modern version, using a popular mixture of clams, mussels, and prawns — the same mix that you would find in a spaghetti allo scoglio — but you could add anything you like.

1. Here's how and when to purge clams. Weed out any with crushed shells (a tiny chip or crack is usually fine) or that are open and don't move when touched or squeezed. (Rule of thumb: if they are open before cooking, they're dead. If they don't open after cooking, they're dead. Throw them away). Purge the clams, if necessary, for at least 1 hour. And regardless of whether or not you're purging, do not skimp on step 5 of the purging directive.

2. Scrub the mussels and pull out the beards. I like the prawns whole if they are smaller, but they can be a bit messy to eat, so you can chop them in half lengthways, right down the body, to make it easier to access the meat without getting fingers too messy.

3. Pour the olive oil in a large casserole pot and warm over gentle heat. Cook the onion and celery, along with a pinch of salt, in the oil until very soft, about 15 – 20 minutes. The slower the better — do not let the onions color, so stir them often, keep the heat low and add a splash of water if necessary.

4. Add one of the garlic cloves and the chilli, cook for 1 minute, then add the tomato and 2 c. of water. Season with salt and bring to a simmer. Cook gently for about 40 minutes, topping up with water if it begins to look too thick.

5. In the meantime, prepare the bread — stale bread is best as it soaks up the liquid without becoming soggy. If it is not stale, you can dry it out in a low oven until crisp. Rub the bread once with the remaining garlic clove.

6. Add the prawns, mussels, and clams to the simmering liquid. Cover and let them cook for about 2 minutes, or until the shells have opened and the prawns are just cooked.

7. Remove from the heat and stir through the parsley. Place the stale bread in the bottom of the serving bowls and scoop the acquacotta over the top of them, distributing the seafood evenly.

In a seafood cookbook called La Cucina Toscana di Mare, by prolific Italian food writer Laura Rangoni, there are two enticing seafood acquacotta recipes. One features fresh and salted anchovies and silverbeet (Swiss chard) together with the tomato-based soup. Instead of poaching the eggs in the soup, Rangoni beats the eggs with a handful of grated pecorino cheese and pours this over the top. The other is an acquacotta with chickpeas and wedge clams, which are first cooked so the clam meat can be plucked out, then added to the soup without their shells. She sprinkles grated pecorino cheese on the bread first, then pours the acquacotta on top. 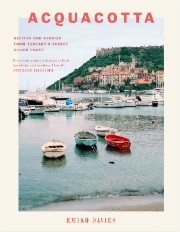