Who wants a good ghost story?

MURPHYS, California – Who doesn't love a good ghost story? Especially around this time of year. But what about sleeping with ghosts? On a recent excursion to Murphys, one of California's former Gold Rush towns, I got to spend the night with many ghosts at Murphys Historic Hotel, including Mark Twain's.

If those walls at this 1856 hotel could talk.

Oh wait. They do.

Murphys Historic Hotel's most frequent phantom, Eleanor, worked as a chambermaid in the early 1860s. It was there she fell in love with a gold miner who went to seek his fortune, promising to return for her. Sadly, he never did. Legend has it she is STILL waiting in spirit form for him at the hotel. (I guess she hasn't gotten around to reading He's Just Not That Into You.) 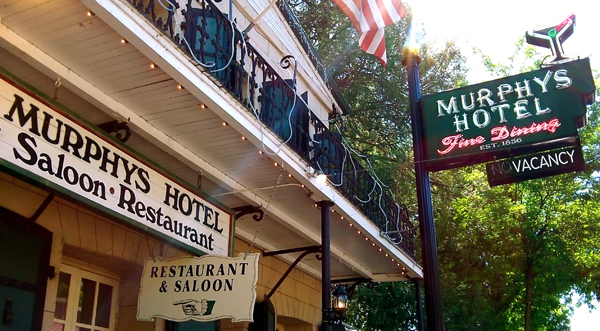 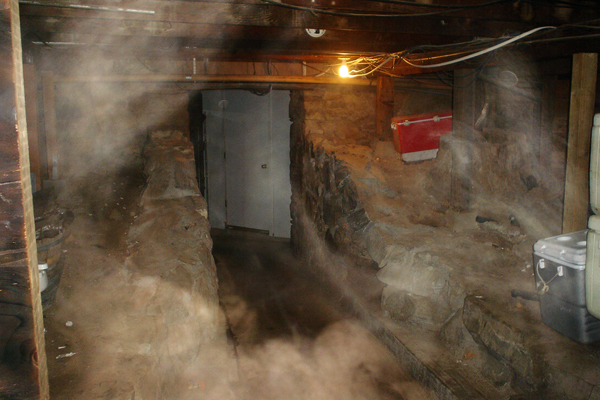 Photo courtesy of Murphys Historic Hotel front desk manager Deanna Broglio. She insists there was no fog in the area on the night the photo was taken. But after hearing noises in the basement, the photographer slid the camera in the room without entering and took this shot.

But despite having been eternally scorned, Eleanor is a friendly ghost. She likes to haunt the kitchen, where she tends to throw small objects like coffee beans, and the Mark Twain Ballroom. In 2009, the American Paranormal Research Association (APRA) conducted a paranormal investigation of the hotel. An unexplainable piece of audio — many locals say was Eleanor — was collected in the Mark Twain Ballroom. Listen for a good scare.

Murphys Historic Hotel calls this gentleman ghost John and believes he was a former hotel manager. John's most famous haunt, heard by the nighttime security guard, was, "Yes, I see the light, but I'll go when I damn please!"

Every room is named after the notable figure that bedded there. I chose to stay in the Mark Twain room in hopes of an artistic and literary apparition. The short story The Celebrated Jumping Frog of Calaveras County, Twain's first literary success, was based on an experience he had in the area. 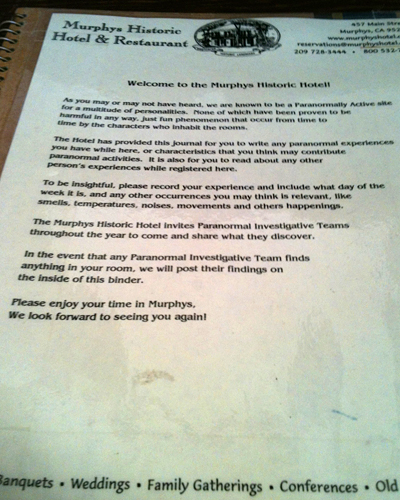 I lifted the guillotine-style wooden framed window, thinking it would be easier for Twain's ghost to enter. (I know: Like he couldn't walk through walls?) I lit a candle and said out loud, "Mr. Twain, I invite you return. You are welcome here tonight." I did not, however, acknowledge Eleanor. I wanted no part of her lingering-in-limbo energy.

My travel pal, Lindsay, who was sharing the room with me, was not on board with my pseudo-séance. Her eyes widened. "Stop that," she said. "I am already freaked out."

I had to admit I was too as I read the paranormal journal on the nightstand about former guests' ghost encounters. (See image at left.) I even asked Lindsay to escort me down the long, dimly lit hall to the bathroom. Yes, this is an authentic historic stay, down to the shared toilets and showers, two for nine rooms.

Moaning, come to think of it, had been the theme of the day — in ghost and in cave form. Earlier, we experienced another kind of fright at Moaning Caverns where we rapelled down a pitch black, narrow hole in the earth that opened into a stunning cave that was so beautifully strange and intricate, Gaudi could have sculpted it. Dangling nearly 200 feet in the air in the cavern discovered by miners during the same era the hotel opened was the non-paranormal highlight of my adventures in Murphys. 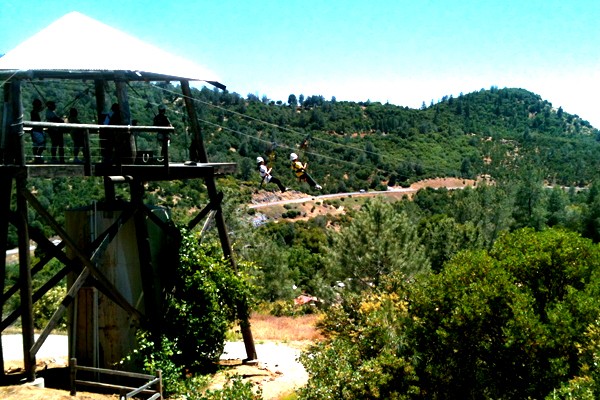 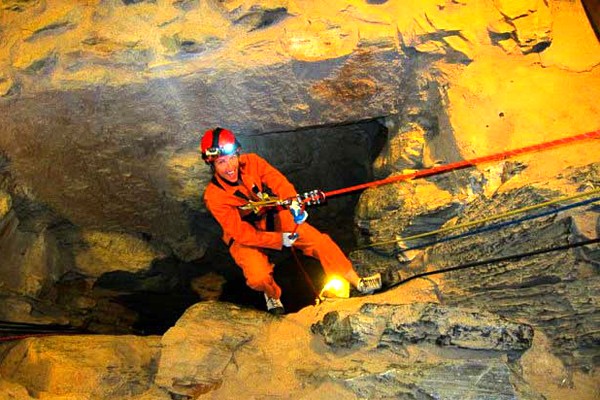 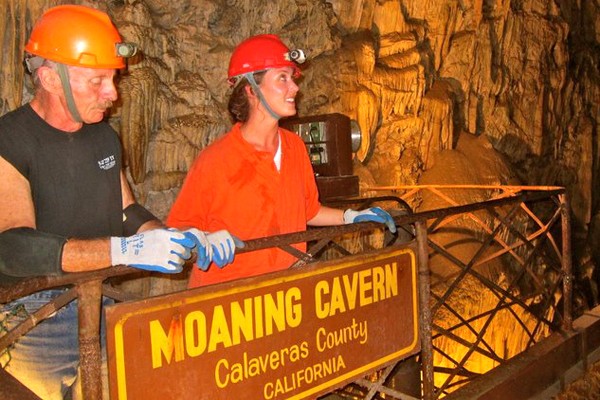 Ziplining and rapelling into Moaning Caverns.

Paranormal panic set in later that night. As we turned in for bed, I pulled the covers up tightly and turned off the light, still waiting, like Eleanor, for a man — Mark Twain in this case — to show up.

At roughly 1 a.m., I heard a melody being hummed. I looked over. Lindsay was asleep. "Psst, wake up. Did you hear that?" I asked loudly. No answer. Was Mark Twain singing us a bedtime lullaby? We'll never know, but one thing is for sure. These walls can not only talk, but serenade as well. 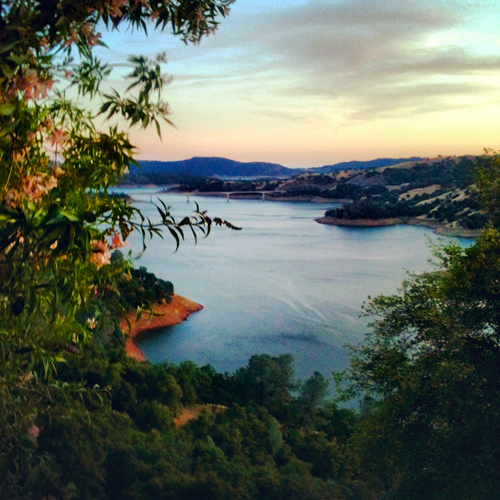 A view of New Melones River.

Murphys isn't known by very many nearby Sacramento or San Francisco residents, much less to the rest of the world. Not to be trite, but Murphys, located in the High Sierras, really feels like a find.

FLY: Land at Stockton Airport (SCK), rent a car, and drive about an hour east on small one-lane highways. The closest international airport is Sacramento (SMF), a two-hour drive.

Drink Wine
Unlike other California wine destinations where a car is de rigueur, Murphys' Main Street has a plethora of wine tasting rooms. No designated driver necessary. Some of my favorites doing more European style wines despite Calaveras County's sundrenched grapes were Vina Moda, Tanner Vineyards, and Newsome-Harlow. 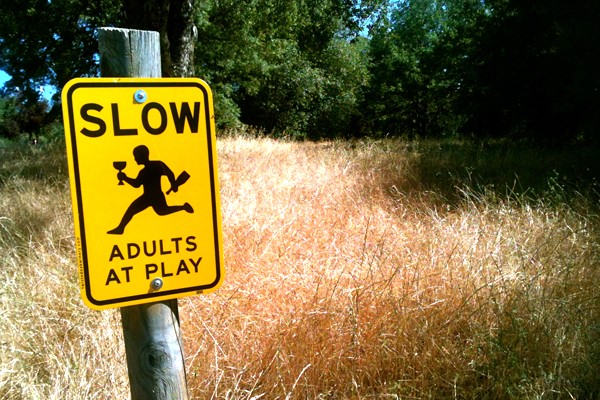 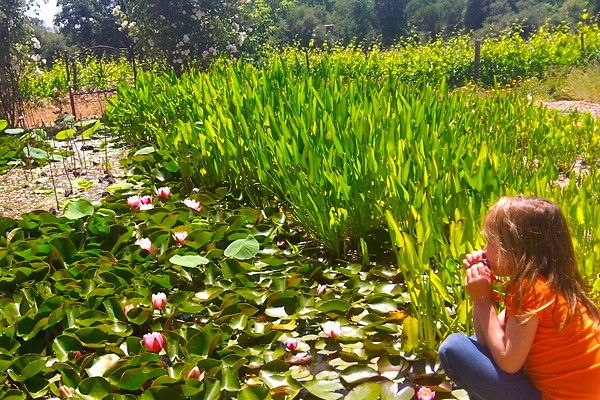 The view at Ayreal Vieux Vineyard.

If you want to venture into wine country, head to Ayreal Vieux Vineyard. For a snarky wine tasting experience, visit Twisted Oak. Their mascot is a rubber chicken.

Take in the Trees
"Big" is an understatement at Big Trees State Park, where you can crawl in, around, and under giant, soaring sequoias on the North Grove trail. Don't forget to take a photo on the Big Stump. Its base is over 25 feet in diameter. The park is a great activity for kids, as what they call a "hike" is more like an "easy, short stroll through the forest." 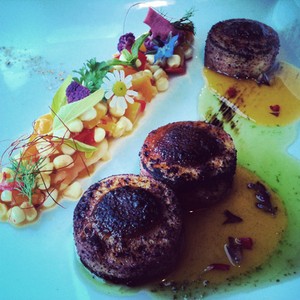 For a tiny town of 2,500, Murphys has a surprising array of excellent eats. V Bistro and Restaurant is a good choice for elevated Americana fare for all three meals. If you're headed to Big Trees State Park, stop at Magnolia's Cafe for chic but casual California cuisine.

Need some something to soak up all the wine you've been drinking? Firewood has ooey-gooey good wood-fired pizzas. Mid-day munchies are best assuaged with a Champagne-raspberry cupcake at Lila & Sage cupcake shop.

For dinner, local winemakers love Grounds, but I found the best-in-show, most inventively gorgeous food at Mineral, where the creative vegetarian menu is on par with — if not better than — many metropolitan veggie-centric fine dining restaurants. (See photo above.)

Besides Murphys Historic Hotel, which is a must to experience the spirit (ahem) of the town, there are several lovely options. 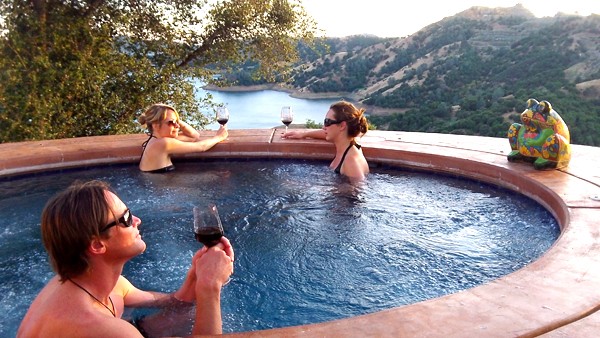 The living is easy at Villa Vallecito.

Villa Vallecito Vacation Rental: This one-bedroom casita has stunning views of wine country and New Melones River. Plus, ending a day with a poolside massage and a soak in the hot tub while watching the sun set as you're sipping on Villa Vallecito wine is nothing short of Murphys magic.

Victorian Inn Bed & Breakfast: You can stay in a room ornately decorated in antiques or in a spacious apartment. The locations cannot be beat: Both are in the center of town. Perfect for rolling out of bed, grabbing a decadent blueberry bearclaw at Aria Bakery, and starting the wine tasting.

The Celebrated Jumping Frog of Calaveras County by Mark Twain

A Few Days in Paso Robles
Just Back from Big Sur