Seasoned activist, entrepreneur, and global volunteer Sloane Davidson spends her life traveling the world to give back and teach others how to do the same in forums, workshops, and on her site, The Causemopolitan. We asked her to share an anecdote from a recent trip.

After taking a year off to volunteer in 2009, I decided I wanted to take at least one volunteer trip a year. I've succeeded and can now add Ghana, Haiti, New Orleans, Guatemala and The Democratic Repubic of the Congo to my list of places I've volunteered. I donate to a lot of charity organizations and decided that I wanted to see the end result of my donations. That's how I ended up in Ghana, personally handing out malaria nets to children and families.

Tell us about your fundraising project.

I created a fundraiser to celebrate my 30th birthday: Cause It's My Birthday. I raised $20,000 for malaria nets and malaria prevention education in Ghana. That's enough for 5,000 malaria nets! The trip was my opportunity to go to Ghana and be part of the distribution.

How did you learn about it?

I partnered with Netting Nations, a small nonprofit that raises money for malaria prevention.

Did you have any prior personal connections to the place or the people?

I knew one of the founders of Netting Nations. A big reason I chose them was because they promised that 100 percent of the money raised would go towards making malaria nets and they wouldn't take anything for overhead. I also wasn't taking a percentage through my fundraising, meaning that $1 donated was $1 going towards a net. They were also really great about putting me directly in contact with the world's leading and most respected net manufacturer, Vestergaard, so I could be part of the entire process.

How long were you there?

The trip came together one year after the fundraiser and I stayed in Ghana for two weeks.

What did you do?

The actual net distribution was about seven days. The days were long, both leading up to the trip and on the ground. I coordinated with the nonprofit, the net manufacturer, and a group of what is called "Queen Mothers" in leading villages to determine where the nets would go. I had learned that it wasn't good to just go into a village and hand out nets at random — it was better to target certain groups who were more likely to take the nets home and use them. We found that these were elementary schools, orphanages, village meeting places, and maternity clinics.

Where did you stay?

We stayed at different places every night. We were traveling from Accra (the capital) to various regions and communities that had been pre-selected. Mostly we were at family-operated small hotels — I'd compare them to a pensione. Very basic, possibly with running water but most likely not, sometimes with a very simple breakfast included.

Anyone can get malaria. Adults can get it ten times a year and be out of work for a few weeks but then recover and be fine. Most people don't know that. However, malaria can be deadly for children, the elderly, pregnant women, and anyone with a weak immune system. These are the groups we were primarily targeting. 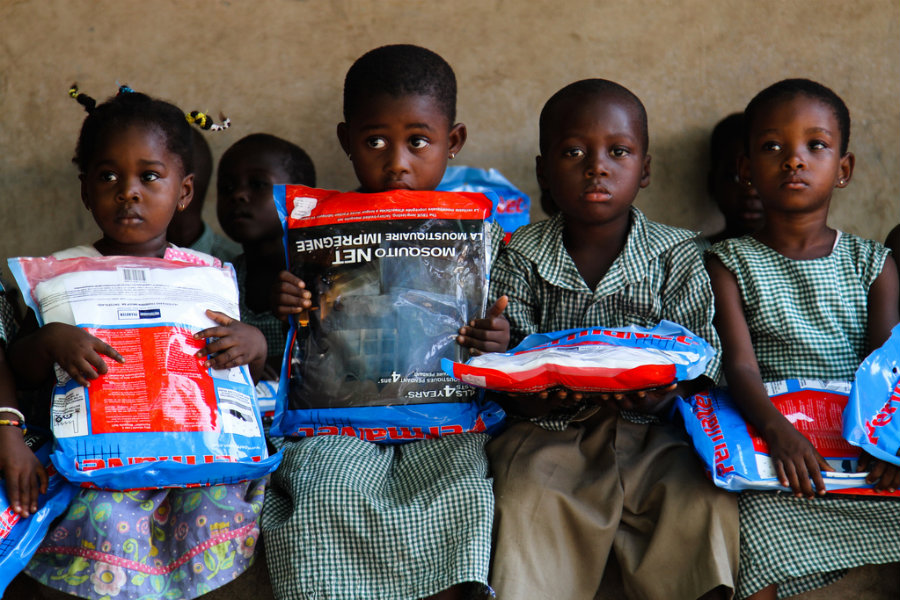 What was the best part?

Handing malaria nets to small kids. Their faces lit up. The teachers told us that the best way to get a family to use a net is to give it to a child. It's similar to how we talk about recycling in our country — reverse peer-pressure that kids put on their parents.

What was the worst part?

I wish everyone who donated could have come with me to witness what it was like to hand out the nets. I took photos and wrote about it when I got back, but it's not the same! It was really magical — there really weren't any bad parts.

Would you do it again?

Yes, absolutely! I love being on the ground and in the field. It's incredibly rewarding.

Tell us a lost-in-translation story from your trip.

Waiting for the malaria nets in the distribution center. We went with these large vans to pile in 2,000 nets and we had to wait for four hours just for a signature. At one point I said to the driver, "I bet Mandy Moore didn't have to wait for her nets." However, I asked for the raw experience, and that is what I got. In international development there is A LOT of waiting, and this was a prime example. Only one man could sign the waiver to let us have the nets and he was out for the morning. It was torture waiting that long, but that's the way it can be there. A lot of waiting for anything and everything.

If you could go back in time and bring one thing with you, what would it be?

I would have asked to slow down and spend a little more time in the villages and schools we were in. I would definitely do more home visits. Every time we went to a village and were invited to someone's house, it was incredibly moving. I would have liked to sit outside and do a task with them — like shelling peas or weaving — and spend a day in their shoes. We had a job to do and I know it would have been a lot to ask the convoy to slow down, but I could have spent countless hours with the people we met and interacted with.

A self-organized trip is for someone who really wants to dig in and do the work. There's a lot of prep in advance. But it's a great way to really have ownership over a fundraiser or campaign.

What advice would you give someone who wanted to do this trip?

If someone wants to go to Ghana, I could recommend a few programs that do work there from microfinance to maternal health. Community organizations also go there — like AJWS. I haven't heard of anyone else doing exactly what I did, but I'm sure there is a way to make it happen.

What was your Kodak moment?

We were two hours northwest of Accra going to visit a school in a very remote community. We were late because the roads were bad. The students were outside waiting for us. They swarmed — I mean swarmed — the van and couldn't wait for us to get out. They grabbed my hand and took me on a tour of their school. It was just a huge one-room schoolhouse, but they were so proud of it. The kids then lined up by the hundreds and I handed each one a malaria net. I kneeled down to be on the same level as them and every kid said "thank you" when I handed them a net. I said "you're welcome." I cried all afternoon after we left, it was a really beautiful experience. These are kids that aren't handed anything ever — let alone something that could save their lives. It was an incredible feeling to be the end-point for all of my friends and family who had donated to make that moment happen.

Has this experience changed the way you think about charitable giving?

Yes, absolutely. First of all, I saw the end point of my donation. I can't stress this enough as a transformative moment. It is so important to hit "donate" on a website and support a cause, but it was really incredible to be there at the moment the donation became a reality. I give to many causes and nonprofits but I can't always know where every dollar goes. I try to understand it more and be part of the process.

Has this experience changed the way you think about travel?

The trip was a reminder that no matter how much I prepare or feel like I've traveled around, it's still an adjustment to arrive someplace for the first time. The biggest thing I learned is I can never have enough reading material! In places where transportation is unreliable, I can go through a book in a day.

Have you brought any lessons back into your regular life?

Appreciation. I really appreciate running water and showers and the ability to have everything I could possibly want in America. The rest of the world isn't like that. I don't take things for granted anymore. Everything is a blessing.

How can the nice people reading this article help?

1. Give up your birthday once in your life, if not every year! Raise $20 or $20,000. It's so much easier to do now with nonprofit crowd-funding websites. Pick a cause you're passionate about and ask your friends to give what they can to help you reach your goal. It's fun and easy to do and will give you the greatest sense of accomplishment.

2. Support global health education projects like malaria prevention. There are lots of ways to do this. It's really hard to understand a disease like malaria in the US because we don't have it here, so education is key.

Sometimes giving back is volunteering or donating money to a nonprofit and sometimes it's something you do for people you care about. Time, above all, is one of the greatest gifts we can give.

The Kenya Diaries, Part 1: Samburu Hokey Pokey
Cool Hunting Gets with the Program at Mfuwe Secondary School, Zambia
Voluntourism 101: Tips for Giving Back