A funny thing happened on John Oseid's way to the French port of La Rochelle: The travel journalist encountered 18th-century troubadour reenactors, a barrel of cognac, and a replica of the three-masted tall ship that delivered Marquis de Lafayette to the colonies in 1780. (You may recall from history class that the French aristocrat became George Washington's loyal companion and successful rebel combat leader in the Revolutionary War.) The replica ship sets sail for America this summer, making stops at various ports along the U.S. Eastern seaboard.

THE HIGH SEAS – What shall we do with a drunken sailor? You don't hear that jaunty old sea shanty sung much anymore. At the French Atlantic port of La Rochelle, I recently enjoyed a spirited rendition by a group of troubadours dressed in late-18th-century costumes. Docked before us at the quai was Hermione, a gorgeous replica of the ship that brought a 22-year-old "boy general," the Marquis de Lafayette, to the American colonies in 1780.

"She sails like a bird," said Lafayette of the original Hermione. On June 5, 2015, Americans will have a chance to see it for themselves as the new incarnation of the light frigate sails into Yorktown, Virginia. Hermione gained glory there as part of the French fleet that blockaded the British, forcing Lord Cornwallis to surrender. In her two-month Hermione Voyage 2015 up the East Coast in celebration of the Marquis’ role in American independence, the frigate will call on a dozen ports, including Mt. Vernon, Baltimore, Philadelphia, New York, and Boston where Lafayette originally landed before going on to lead 1,200 light infantry under Commander Rochambeau at Yorktown. 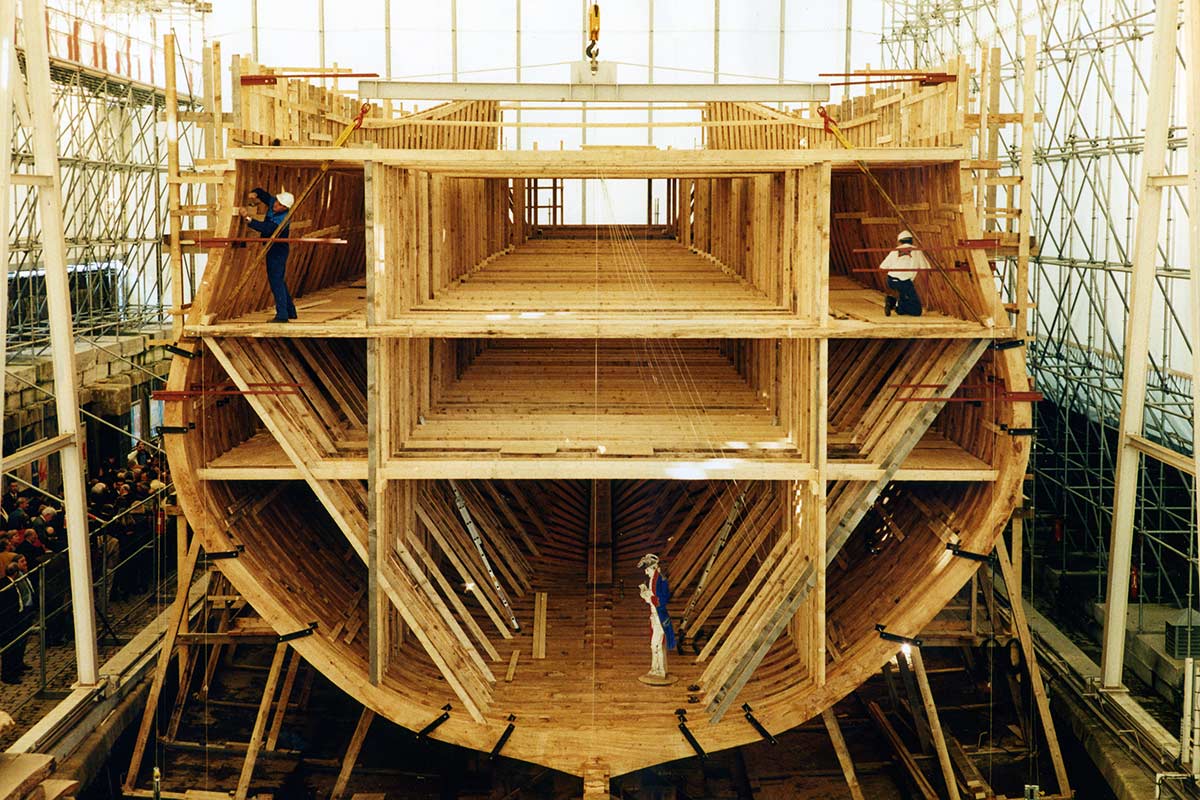 The Hermione was nearly twenty years in the making. Photo courtesy of Association Hermione-La Fayette.

A small group of building enthusiasts and the French Association Hermione-La Fayette led the nearly 20-year charge on reconstructing the 213-foot-long, three-masted Hermione out of 2,000 oak trees in the port of Rochefort. (The original ship was completed in a mere eleven months.) Over the years, the association conducted tours for four million visitors, whose contributions helped pay for all that oak and more.

In a stroke of luck, shipbuilders obtained original blueprints from the British, who had captured the Hermione's sister ship Concorde. Twenty-six non-functioning cannons were forged by the same foundry that made the originals, while a Swedish team contributed the rigging. The only nod to modernity are two motors (per international law), electronic gear, and, thankfully, proper sanitation. (Espresso makers, too, I presume.)

On my recent tour of the Hermione in La Rochelle, I watched teamsters lead two massive draught horses up to the quay to load a barrel of Hennessy produced in honor of the 250th anniversary of the Cognac house. To pomp and circumstance, dignitaries dipped a thief (a tool for extracting a sample, not a human) into the barrel, after which a lady in a tricorn hat read out a proclamation: The shipment was fit to sail to America. The ceremony echoed what was described in a letter by a Hennessy Cognac loader in 1780 — "Mr. the Marquis de La Fayette is leaving on Tuesday on the Hermione; he is a general major of the army of insurgents." Since, as we know, our future Founding Fathers liked their fine tipple, they were surely happy to receive more than just the boy general. 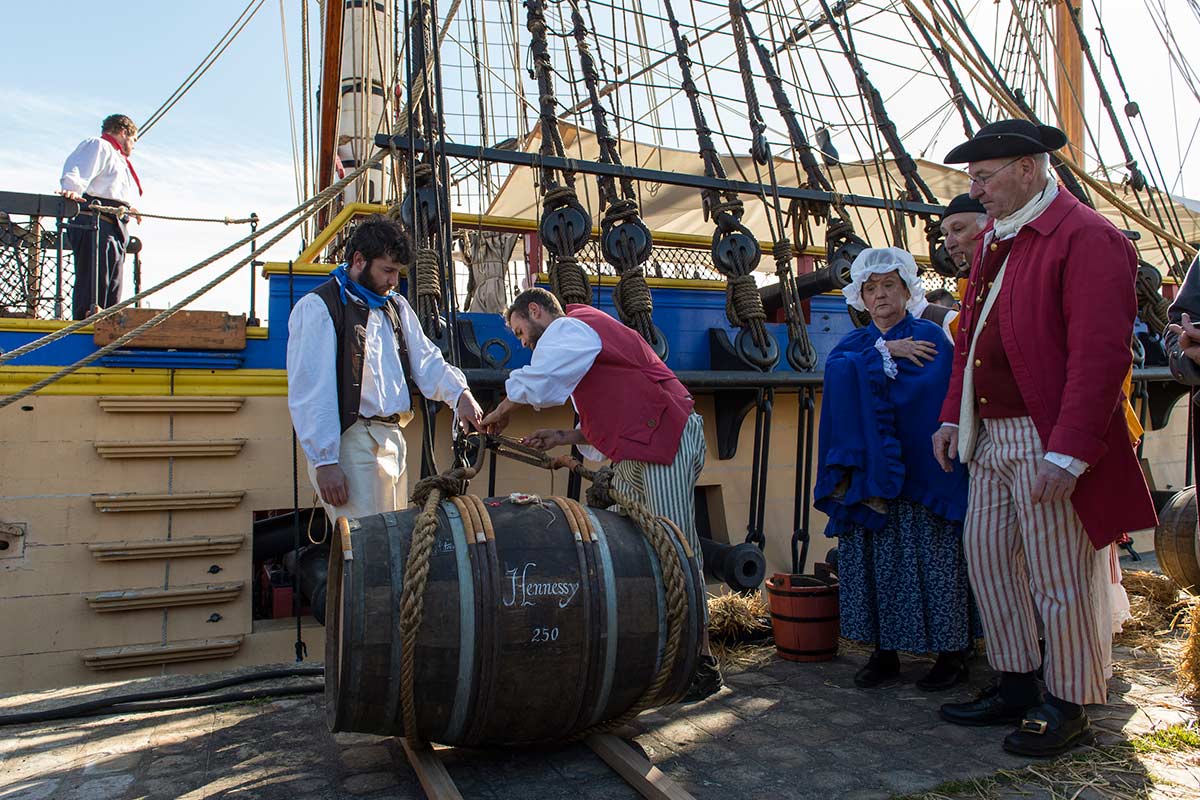 Reenactors prepare to hoist a commemorative barrel of Hennessy's 250 Collector Blend on to the Hermione for the Transatlantic voyage. Photo courtesy of Jas Hennessy & Co.

Once on board, the new Hermione's Second Captain and former French Navy Lieutenant, Charlène Giquel, explained that one third of the crew of 86 (versus 300 originally) are women. Wearing a stiff period uniform of the day, ship Superintendent Bruno Gravellier told me below deck that in Lafayette's day, the French crew ate on the floor, in contrast to British sailors, who ate on tables. The Hermione also had 100 sheep down there, a handful of cattle and feed, and countless chickens running free.

When the Hermione arrives in the United States, visitors will mingle at each port with period re-enactors, and the ship will be open for self-guided tours and a photo exhibit about its construction. The New-York Historical Society is mounting the exhibition Lafayette's Return (May 29 through October 25), while a coterie of other U.S. historic societies, as well as the Tall Ships of America, will participate.

As one of the premier symbols of Franco-American unity has now been resurrected, not since the Bicentennial will we have seen such a grand speciman of tall ship history. By the time the Hermione sets sail back to France in mid July, perhaps more Americans will recognize that we owe our independence in large part to France and specifically to to Marie-Joseph Paul Yves Roch Gilbert du Motier de Lafayette, a.k.a. Marquis de Lafayette. Let's drink to that. 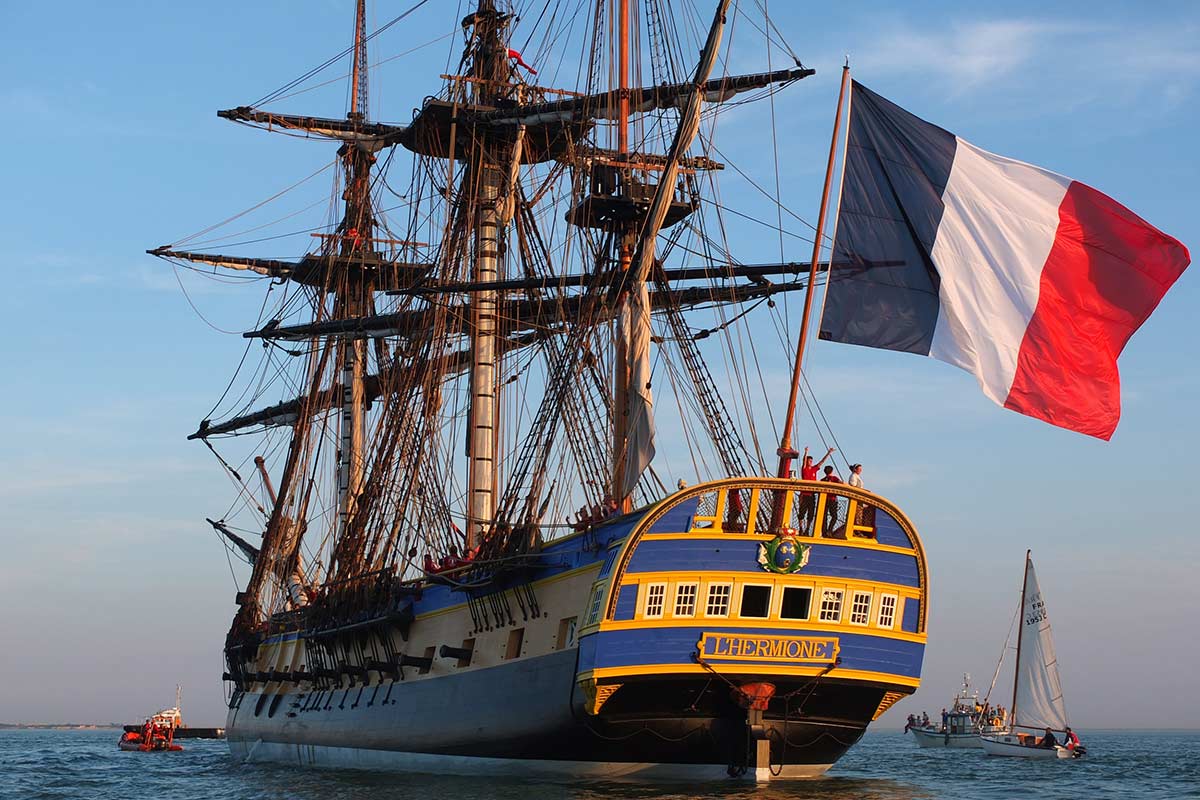 The Hermione unfurls her sails in a test run. Photo courtesy of Association Hermione-La Fayette.