There's no stopping a man on a mission...for kitchen tiles. Arts marketing consultant and design aficionado Steve Rogenstein explores Seville and Lisbon through the ceramics on the wall.

SEVILLE and LISBON – My boyfriend imagined lining his West Village apartment windowsills with picturesque antique tiles. We had seen a few throughout our travels in Italy and upstate New York, but none that particularly suited his tastes. With a discriminating aesthetic — native cultures-meets-minimalism — no ordinary tile would suffice. We needed something with class, with character, with a story. Lo and behold, on a recent business trip to Seville and Lisbon (sadly sans boyfriend), I found all that, and much more. 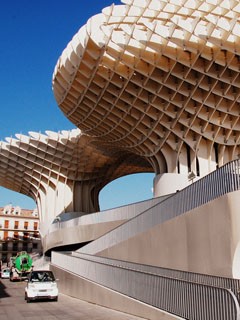 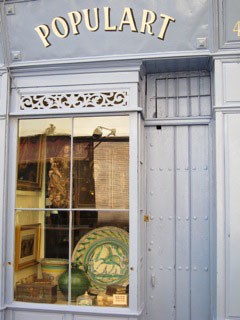 Entranced and overstimulated, I meandered down medieval cobblestone alleyways, eventually stumbling upon a quaint antique store chockablock with tiles, ceramic ewers and basins, and wooden artifacts. Leonardo, the convivial 35-year-old shopkeeper of Populart, educated me about Andalusian tiles. Predating the 15th century, artisans from neighboring Triana were world-renown for their azulejos, or tiles. (Its etymology: "blue from faraway," meaning that travelers could see the typically blue tiles from a distance.) Their corda seca technique was masterful, whereby strips of wax, grease, or hemp were topically laid onto terracotta surfaces, enabling the tile makers to use several colored glazes on a single tile, simulating the coveted look of mosaics. Seville had four signature colors: ochre (representing earth), green (trees), azure (sky), and a blackish brown pigmented with manganese (shadows). Who can resist the mystique of shadows? After an hour of hemming and hawing, crouched on the floor, indecisively dazzled by the seemingly endless selection, and placing sets of tiles next to one another to ensure pattern-compatibility, I set aside three pairs from the 17th century. Before purchasing them, I first needed to confirm the dimensions of the windowsills. 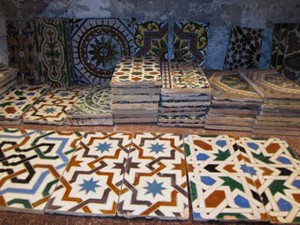 I returned to Populart the next day, equipped with the dimensions: 22 cm x 86 cm, much shallower and far longer than I had thought.

Then, the crushing truth: No matter what configuration I tried, they weren't going to fit. Brightening with another option, Leonardo eagerly led me to a back room lined with several armoires filled with rows of small tiles, which I rifled through for another 30 minutes. Although they more closely fit my dimensions, not a single one compared to those I now coveted. After more deliberation, I finally pulled out my credit card and bought all three pairs. Regret would forever haunt me if I couldn't find them elsewhere, even though my Portuguese friend assured me that antique tiles were commonplace throughout Lisbon. She wasn't kidding: much to my delight, Lisbon, too, was a tile-lover's dream come true. 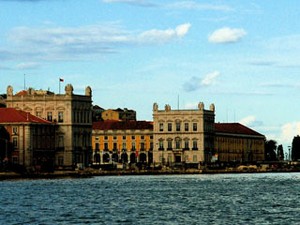 In Lisbon, the Hunt Continues

Lisbon felt like Europe 40 years ago, exuding old-world charm while possessing all the 21st-century amenities a traveler would desire. Once considered the center of the world, the city is perched atop seven hills, surrounded by a river and the sea, peppered with parks, and, incongruously contrary to the economic recession, trilling with life. Its hills continuously afford scenic vistas, a patchwork of terracotta rooftops, church spires, and the ruins of a castle crowning one hill. Everywhere are outdoor cafés, graffiti street art, boutiques selling young designer wares, eateries proffering nouveau cuisine, and distinct neighborhoods boasting luxury shopping, culture, bars, discotheques, fado (Portuguese folk music), gay nightlife.

And then there were the tiles, tons and tons of tiles. 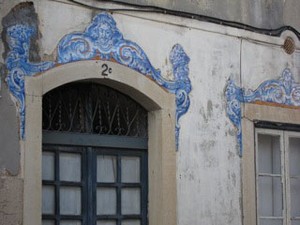 Still on a quest to line Tomas's windowsill, I was told to visit Feira da Ladra ("Market of Women Thieves"), the city's bric-a-brac flea market on Saturdays and Tuesdays, to find cheap tiles. A local friend came with me to troll the stalls. One woman displayed spectacular sets of four blue-white-and-yellow tiles, but at 10 euros each, overpriced. Jesse admonished me not to speak. "When they hear your English, they think 'rich tourist' and won't bargain. Let me talk." The next vendor quoted 25 euros for four, but they weren't right. More disappointment followed, but on our way out we finally found a wide selection at one stall: diamond patterns, star-like bursts, and fleur-de-lis, all in Portugal's traditional blue-and-white. Not wanting to limit my selections, I bought a few of each, eight in total, for 30 euros. To ensure that the tiles would fit Tomas's windowsill, I embarked on another quest: border tiles. 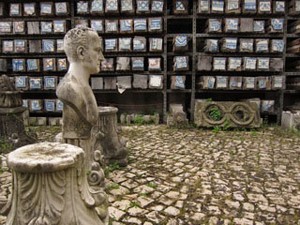 Back in Principe Real, we entered Solar Antiques, a veritable tile mecca. I descended into the cellar, where rows and rows and shelves and shelves and stacks and stacks and racks and racks of individual tiles were stored, neatly organized along the walls, on the floor, laid out on benches, lining bookcases, grouped by century, Art Deco, Art Nouveau, 19th, 18th, 17th, 16th, 15th centuries, the tiles getting simpler and simpler, the piles shorter and shorter, the colors fewer yet richer. Some sold for more than 100 euros apiece. I stepped into an outdoor cobblestone courtyard filled with the detritus of Portugal's glory — mossy statues of protective lionesses, marble busts of distinguished personages, felled Ionic columns, fountain basins carved in stone — surrounded by thousands more tiles stored in countless rows of wooden crates, a sample tile nailed to the front of each bin for easy identification. 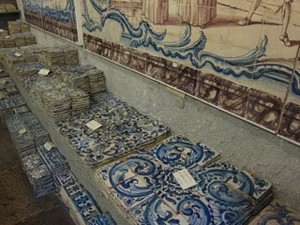 With only 20 minutes until closing time, we quickly spread out my flea-market finds and simulated two different borders: a wavy floral pattern and a strong, masculine double-blue stripe. After painstaking deliberation, I selected ten of the latter. My 18th-century finds snugly bubble-wrapped, mission accomplished, I exited, overjoyed at having found the perfect tiles for Tomas's windowsill, and a piece of Portuguese history in hand.