There's no denying it: Iceland is the place to be for in-the-know traveling types. Skip the crowds in favor of an off-season visit. Seasoned traveler and journalist Elizabeth Johnson shows us the way.

ICELAND – The magic began before the plane even nosed its way to the ground.

"Everyone, you need to wake up right now," the pilot crackled over the intercom. "Look out the window."

Splashes of emerald green wavered in the ether. The light danced and shimmied, morphing from a cogent line to hazy splashes of color. Somewhere over Greenland on a transatlantic flight from San Francisco to Reykjavik, the Northern Lights had decided to stun us with their presence.

That's Iceland in the winter: Unexpected and stunning. And very cold.

Three years ago, I met two travelers in Paris. One was a distant acquaintance from the Midwest. The other was a stranger from Arizona. Our misadventures in the city of love cemented our friendship. We made a pact: Every year, we would see a new country together. That's how we ended up in a beat-down mustard-colored Volkswagen skidding down Iceland's Ring Road for seven days. The magic that began thousands of feet in the air followed us through blizzards and hailstorms.

Iceland — an island forged by fire and ice — was long abandoned for its sexier European counterparts like Germany and Spain. But in the last half-decade, the trend has reversed. In 2010, 488,600 tourists visited the country. By 2015, that number skyrocketed to 1.2 million. Wow Air began offering longer layovers — as much as a week — and tourists clamored to see Iceland's waterfalls and rugged black lava beaches.

The bulk of visitors come in the summer when the grass turns green and the sun shines for 24 hours a day. But the true magic happens in the dark of winter and the slow start of spring. The Northern Lights glimmer in the sky, blankets of white cover the fields, and residents hole up in cafes with creamy asparagus soup and black coffee.

Experiencing Iceland without the ice is a tragedy.

We began our road trip in Reykjavik and looped around the entire Kentucky-sized island. One friend lost her passport in a freak blizzard. The other fell in love with an Icelandic man with eyes the color of a clear summer sky. (He followed her back to Arizona.) We ate dried fish and sheep's head, paid $17 for three potatoes, and soaked in hot springs next to snowdrifts. Our wallets emptied quickly — Iceland is expensive. But the experience was so full that it stung less.

In a country where tourists outnumber residents, the locals were unflinchingly kind. One local man drove us to see a herd of reindeer. Another brought us to a secluded hot tub near the beach in Akureyri, a residential secret. They commented on our funny-looking snow boots, and goaded us with tales of Northern Lights that were as bright and intense as rainbows.

Iceland in the winter: Where the tourists bond over their red noses and cars stuck in snowdrifts. Where waterfalls freeze over and hot tubs steam in sub-zero temperatures. Where long stretches of road remain empty of traffic.

Where the magic never ends. 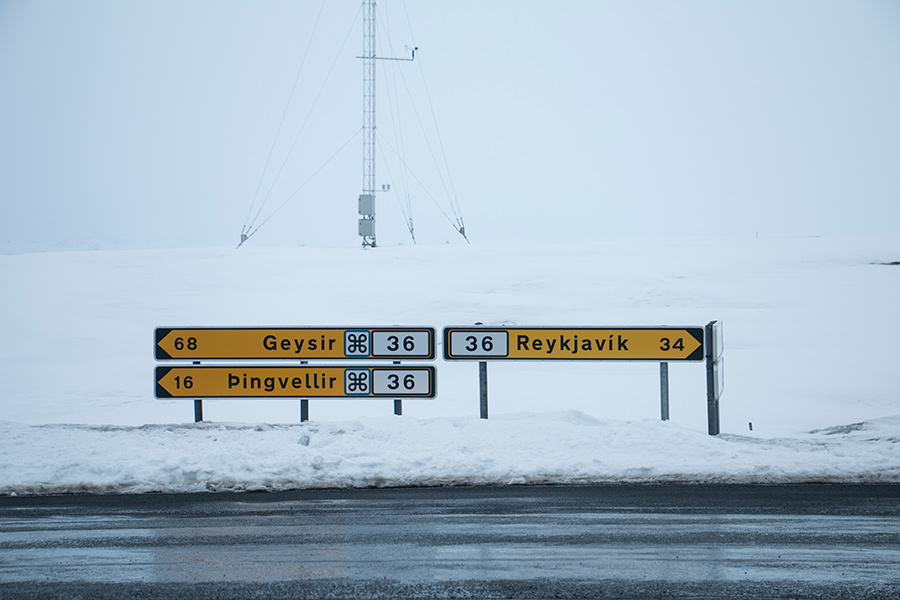 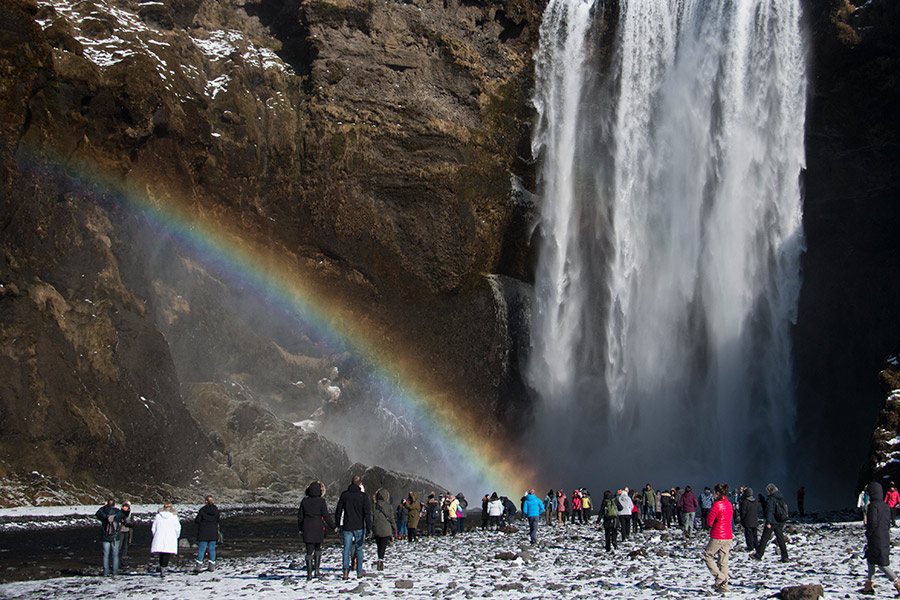 The end of the rainbow. 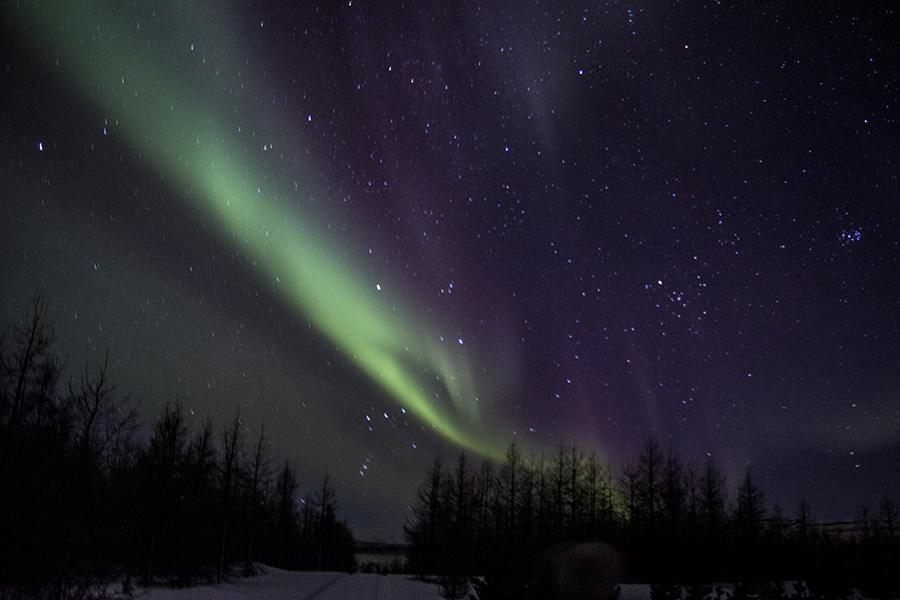 The scenic South Shore is a long stretch of attractions including steaming hot springs, waterfalls, and black lava beaches. Walk behind the thundering water at the elegant Seljalandsfoss waterfall and take in the power of Skógafoss waterfall. After, stop at Mia's Country Grill — an unsuspecting red polka-dotted food truck — to dine. For stunning vistas, continue on to the Dyrhólaey nature reserve. Just don't fall off the cliff — there are no fences. Spend the night in Vik.

From Vik, continue east over the floodplains to the foot of Vatnajökull, Europe's largest glacier. Skaftafell is one of the country's most beautiful nature areas with many hiking trails. If weather allows, hike to Svartifoss, the country's most iconic waterfall. Finish the day at the Jökulsárlón glacial lagoon, which features huge ice blocks floating in deep blue water. Höfn is famous for its lobster and seafood. Dine like royalty.

The longer driving day follows the peaceful and beautiful East fjords. In the evening, hunt for the Northern Lights.

Check out the mud pools at Námafjall and the mysterious lava formations at Dimmuborgir. Spend the afternoon with a beer while soaking at the Mÿvatn Nature Baths. If you're lucky, you'll see the Northern Lights shining as day turns into night.

The capital of the north is filled with cosmopolitan shops and cafes, and an old town sector with pastel-colored homes. Continue to Goðafoss waterfall, known as the waterfall of the Gods. Folklore says it was formed when a speaker threw pagan gods into the earth sometime around the era Christianity was introduced. Of course, visit the horses in Skagafjörður. Feel insecure about your own mane after six days on the road.

It's all about reindeer burgers and geothermal cooked bread. Feast on the local delicacies, then float in yet another hot spring. Deildartunguhver thermal spring has 180 liters emerging to the surface every second (that's more than any other spring in Europe). 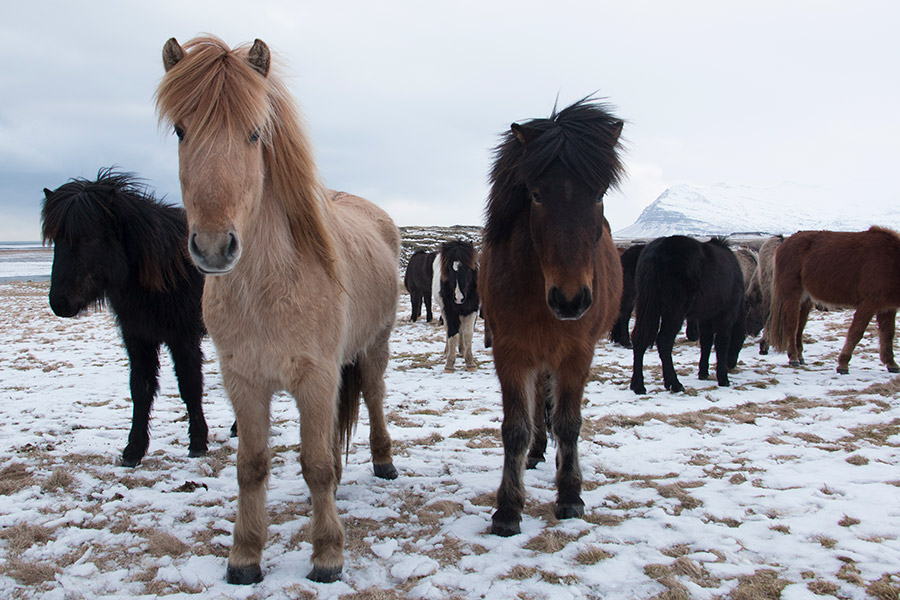 Even the horses are more beautiful here. 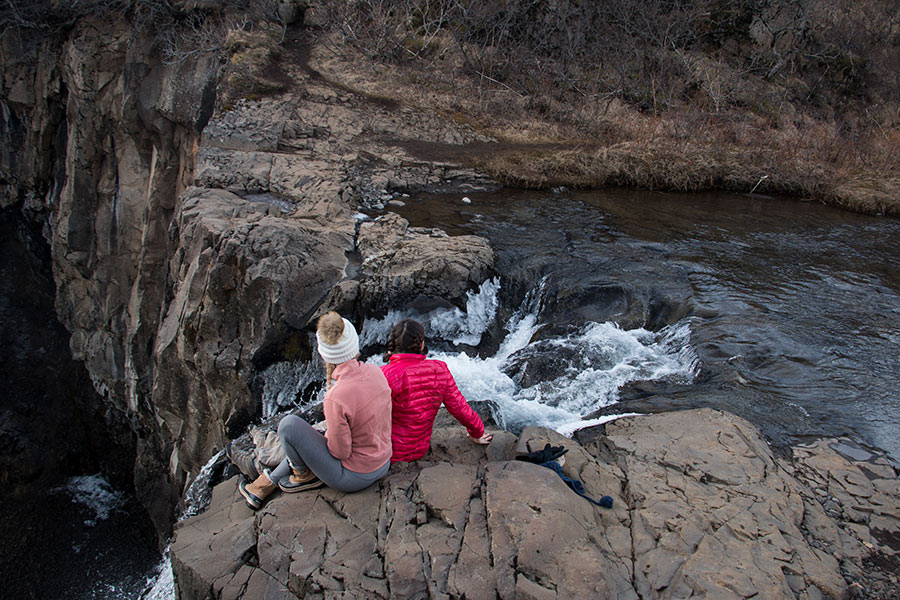 Living on the edge. 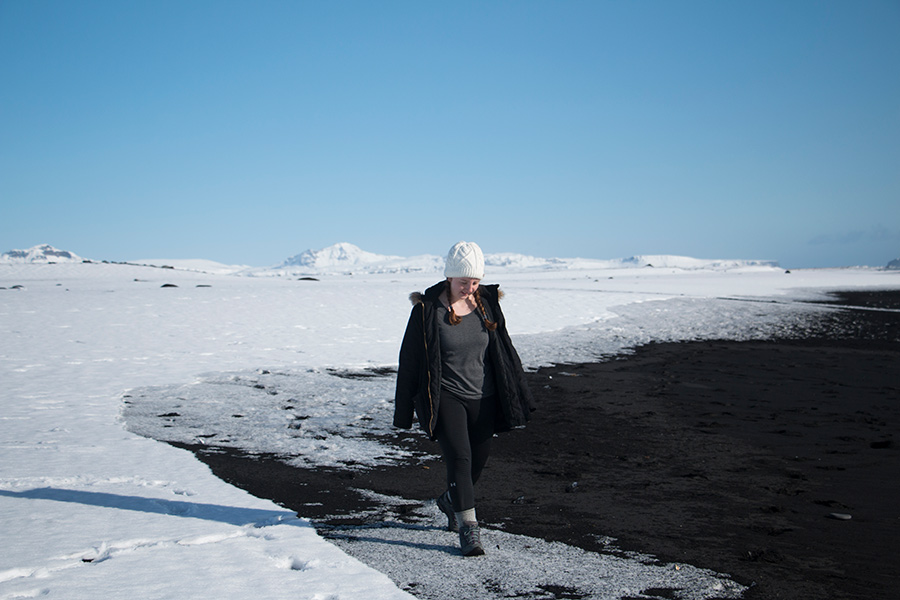 A walk through the black sand and the snow.

The one downside to traveling in Iceland: The pricey accommodations. In the summer, travelers can skirt the system by renting camper vans, or unrolling a sleeping bag and tent outdoors. But in the winter, heat is essential. Because of a historically low demand, the supply of hotels around the Ring Road remains low, despite increased traffic. The most common affordable housing in the country are guesthouses. The hostel-hotel hybrid has private rooms with shared bathrooms and fully-equipped kitchens. Airbnb options have slowly become more plentiful in Iceland. And of course, hostels are always a cheap option. Just remember to bring your own sheets.

In Vik, try the Guesthouse Carina. In Hofn, we stayed in this cozy Airbnb. Egilsstaðir brought us to another guesthouse. In Myvatn, Akureyri, and Laugarvatn, we stayed in hostels again.

1. Silfra Strait: Glossy diving brochures market it as a once-in-a-lifetime opportunity to swim between the North American and Eurasian tectonic plates. It's cool in theory. Until you realize that translates to your muffin top being shoved into a dry suit and thrown in literally freezing water. Also, tectonic plates are rocks. You pay almost $200 to stare at rocks. Even the complimentary hot chocolate offered afterward isn't enough to tip the scales.

2. Abandoned plane at Sólheimasandur: In 1973, a United States Navy airplane crashed near a black sand beach in rural Iceland. Left behind was the fuselage — and an Instagram opportunity no tourist has been able to turn down. The one-hour hike leads you to a pack of tourists scaling a rickety and rusting plane (hello tetanus). In a jam-packed week, making the hike isn't worth the time.

3. Icelandic Hotdogs: The lukewarm, typical baseball fare is served at every gas station along Highway 1. Just because they're Icelandic doesn't mean they're good.

WHAT TO PACK FOR WINTER IN ICELAND

Temperatures rarely plunge below freezing. It's the shifting weather tourists have to prepare for. It is not uncommon to experience a rainstorm, blizzard, windstorm, hailstorm, and sunshine in a single day. Pack layers to accommodate for the changes. Also bring a headlamp, hand warmers, and micro-spike crampons.

You Will Want to Propose in Iceland Too
Hey Stranger, A Hitchhiking How-To on Iceland's Ring Road
Let's Get Extraterrestrial in Iceland