Petra Dokken has been visiting Bhutan for decades, which gives her a rare insight into this mystical land that's frozen in time.

BHUTAN – His name is Pema. Under thick blankets in a village in the middle of nowhere in the Himalayas, his scarred body warms mine in the night. He lifts the mattress from the unused bed on small wooden legs and puts it on the floor. "This is how I am used to sleeping."

Until recently, few people had even heard of Bhutan, a small kingdom high in the mountains, hidden between Tibet, China, and India. And even fewer had ever visited. Bhutan has been isolated — from world wars, industrialization, and even, for that matter, cyberspace. The Bhutanese people did not know of your existence until recently, when emailing became possible. 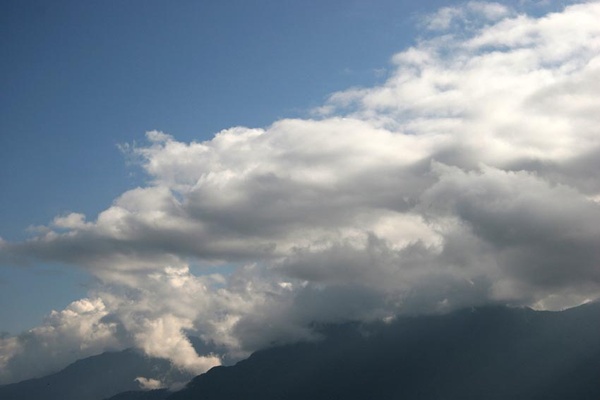 Tourists have been visiting the country annually since the 1970s, a controlled number of a few thousand who pay a very expensive daily visa fee. I came to Bhutan a few years ago, and tourism has since boomed.

When I am in Bhutan, the outside world ceases to exist completely. And when I leave Bhutan, I remember it as a dream or a poem.

The house made of stone is freezing; a small heater is sizzling seductively in the room next door. A new day begins with a cup of hot tea made hearty by adding milk and fresh ginger. 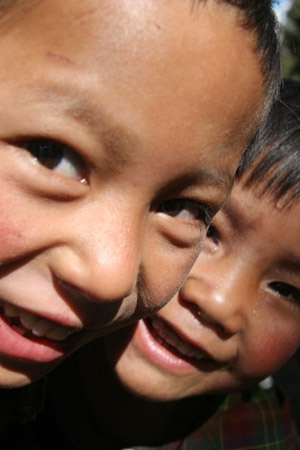 The boiling water is sufficient for a life-giving wash-up. "When I was a child, my mother fetched water and put it to heat over the fire every morning. She filled a zinc bowl and gave it to me," Pema tells me, as he slowly sinks his strong hands into the steaming water in front of him. "When I was very little, my whole body would fit in the bowl. There I was, sitting in the bowl outside our house."

His body knows cold, and he is no stranger to frozen limbs, as Bhutanese homes are unheated. There's no electricity, and the water is crystal clear and icy. At this altitude, it is chilly most of the time, even in the summer. When it is too cold, the children are sent home and the schools close. Children who want to study sometimes have to travel from their villages to get to the nearest school where the books are in English, books that have most likely been donated from India. The local language, Dzongkha, is similar to Tibetan and is close to extinction. In an effort to preserve it, it is now being written down.

"Kuzo zangpo la" is how you are greeted, with a smile and very often curiosity. Tourists are representatives of the outside world. "Tourism is both good and bad," a travel agent who wishes to be anonymous told me. "It frightens me that a wealthy male tourist can offer a young Bhutanese boy more money than he can say no to." Almost everyone that I talk to asks me not to use their real names. 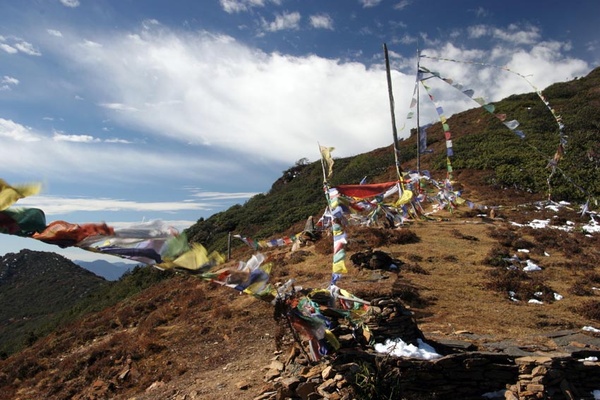 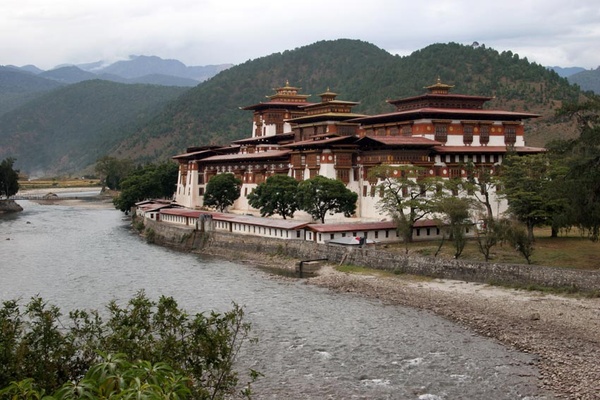 The former king, Jigme Singye Wangchuck, is kind, and everybody loves him. His photo hangs on the wall at every eatery. He stepped down from the throne to give his son, Prince Jigme Khesar Namgyel Wangchuck, the chance to continue his quest for democracy and progress. (The prince's youth and beauty have earned him the nickname "Prince Charming.") Since astrologers predicted the years before 2008 would be bad ones, the prince was named Dragon King in December 2006, but was not crowned until 2008. He promised to raise gross national happiness and held the first elections that same year. In 2011, the young king married Jetsun Pema, a woman of the people.

Night sky. It is late in the capital, Thimphu. The city's white buildings adorned with orange painted details seem to pour down the mountain slope to the river where strong currents make a rhythmic sound. Starving stray dogs are barking non-stop, moving in packs. A barbed wire tied tightly around a dog's neck makes me hope children are not using an innocent creature for a cruel game. 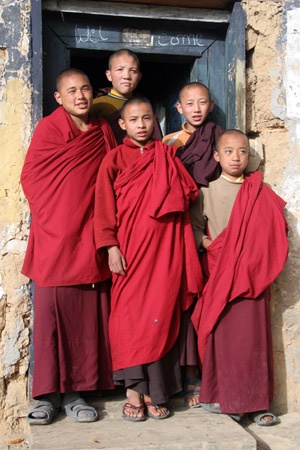 Pema comes to my hotel to watch TV, and afterwards we sneak out for a walk. Without the pollution of street lights, the darkness feels safe. A calm stillness, an emptiness, pervades. The buildings all look the same, paint falling off the walls. He takes me into a pool hall, where boys in their late 20s are gathered around the pool table. They have loosened their ghos, a kimono-like dress worn with wool socks and shiny leather shoes that's the national garment that every man wears. They're smoking cigarettes, drinking beer, and chewing betel nut, here called doma.

"None of us actually knows the rules of the game. We just play. Do you know them?" I am the only woman in the room. I'm wearing jeans and a T-shirt, but no one is looking, judging, or making me feel uncomfortable. I teach them how to shoot pool.

Pema and I listen to music on my iPod while exchanging existential anguish. His childhood sweetheart was married off to someone else because Pema was not suitable for the daughter. He looks melancholy and says love is not for him. "You will meet the someone," I say. Marriage in Bhutan is rather informal business; it's easy to divorce and remarry. Pema quotes Shakespeare and giggles. He is easily affected by the beer.

Bhutan is stunningly scenic, though most places very difficult to reach. The changes the kingdom is going through are enormous, even if they arrive in careful, small steps. Television and the internet arrived in 1999, but in the villages, life is still conducted according to principles of Buddhist mysticism. A sick Bhutanese can be flown to a hospital in New Delhi or Bangkok for free surgery, but out in the countryside, ancient herbal medicine is practiced. 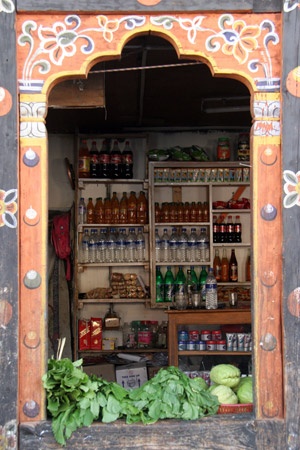 One day when the rhododendron bushes are in full, psychedelic bloom, I am shopping for honey. But the jar slips and I drop it. I am simultaneously chewing betel nut, so my lips are tinted deep red. The villagers are delighted by the spectacle. Pema and I, excited by the event, wander off. The violence against the honey jar led to a talk about brutality.

"Have you never been beaten?" he asks and is astounded to learn that I have not. As a child, he was whipped with sticks to become strong and disciplined. We are the same age. He says it is all right, it is okay, he accepts it. Many times I admire his deep calm and humbleness toward life's innate difficulties.

The togetherness in Bhutan is solid, which of course at times makes me wonder about the definitions of free will. For the well being of the nation, young people are sent abroad to study, and, in exchange, they solemnly promise to come back and offer their skills to their country. I discuss women's rights with a woman who was one of the first in Bhutan to acquire a high official position. She tells me about efforts to teach women how to read, to know their rights, and to organize in opposition against domestic violence. Bhutan may be a non-violent society, but it still suffers from poverty and inequalities. Only a blind and foolish romantic would write a tale of an unspoilt paradise. Bhutan is a human land, too. 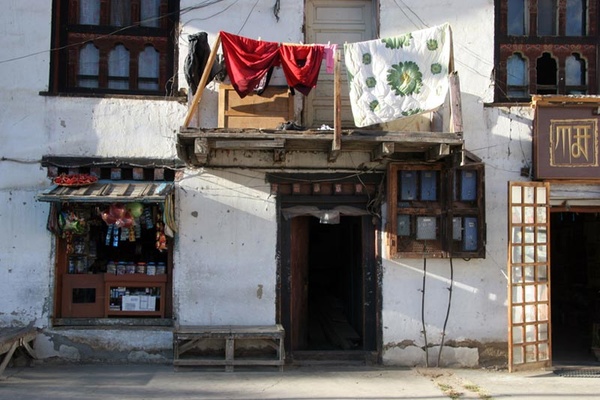 The arrow of time cannot be stopped nor reversed. Why shouldn't Bhutanese dwellings have hot water in the tap, electricity, and functioning infrastructure? I meet Sonam, a young man studying Buddhist philosophy. To return home to his village, he travels by car for two days and then by foot for two more. He has not seen the world; he has not been exposed to media or multiple choices. He laughs at me. He thinks I look a little bit strange: a tall, strawberry blond Swedish vagabond in boots and lipstick, passionately engaged in the struggle to save that last Bengal tigers.

He looks so polite in his gho, and the Bhutanese women so elegant in their kira. Even if the clothes are similar, the people here look very different from one another. Different tribes live in different cardinal directions. But they all have one thing in common: really strong leg muscles. To live here means to walk, up and down, long distances, and carrying a load. My legs are not that strong yet. 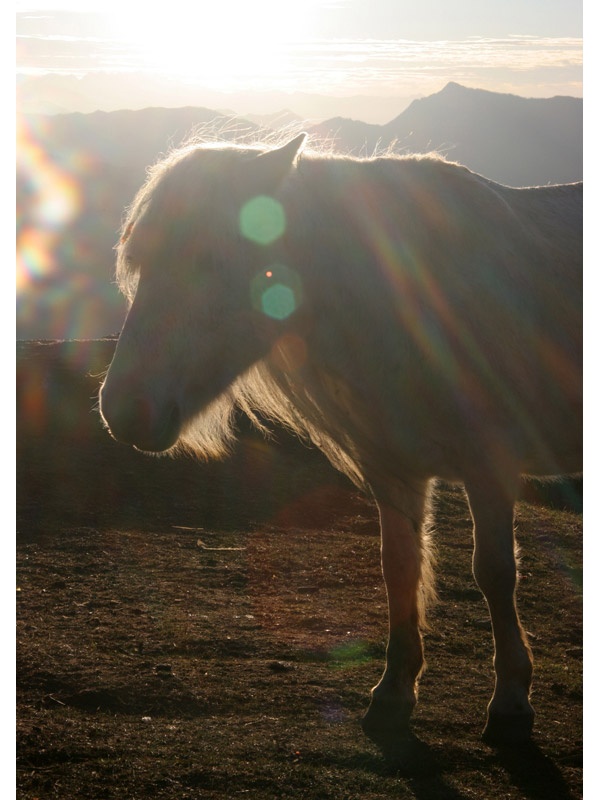 Pema tells me that he likes to wash his clothes by hand on Sunday. He also likes to eat hot chili curry with his fingers. In the Himalayas, he makes fires in the snow and prepares me another nourishing brew. I worry that I will freeze to death, as all my batteries die fast. Even my heart is beating slower to save energy. I warm my fingers deep in the mane of one of the small horses carrying my backpack.

Everywhere this journey takes us, we visit monasteries, temples, and fort-like buildings called dzong, where both religious and administrative interests are handled. Pema wants to know if I have been paying attention. He gets annoyed when I cannot remember what the future Buddha looks like. (It should be easy: He is always standing or sitting down Western-style instead of sitting on the floor.)

"I am sorry, Pema." But one of the symbols of luck I never forget. The lotus flower represents the pure mind. He forgives me, and we put prayer flags around a stupa to call upon happiness. Our prayers travel by the wind horse. 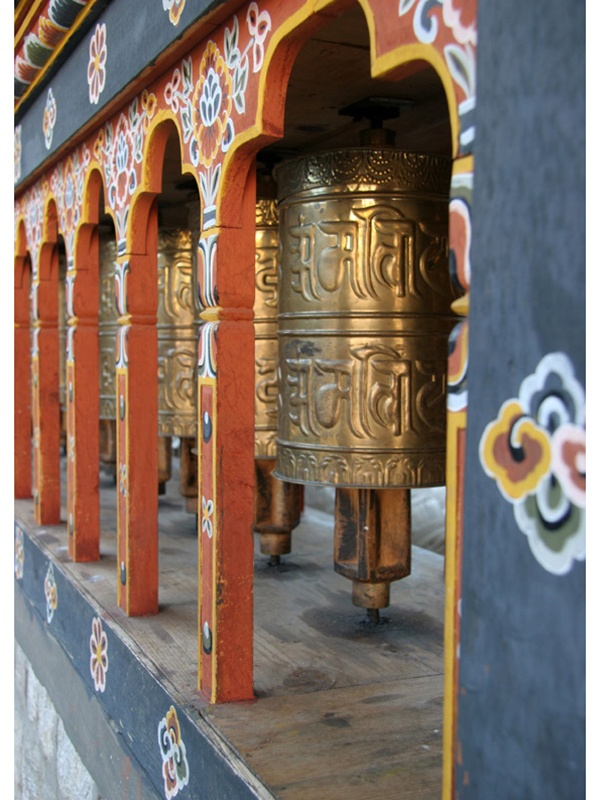 Happiness can be a break from everyday monotony, and a religious festival is just that. Tsechus are big events in the villages, bright and vibrant, filled with dancing, rituals, and traditions. A joker figure mills abut the crowd, poking young ladies with a wooden phallus, a simple way to talk about fertility. Amusement and giggles all around. After a few of these festivals, I think I begin to understand and I even learn some dance moves. So when, without thinking, I move to singing, three old toothless women laugh out loud. With twinkling eyes they chuckle and point at me, encouraging me to continue.

Fashion Designer Cynthia Rowley Takes the Whole Family to Bhutan
My First Time: The Lowdown on Bhutan
Balls Out: Adventures in Bhutan