It may be the birthplace of Wonder Bread, but there's nothing boring about Indianapolis. On a visit with newly transplanted pals, Jean Tang took a spin around the up-and-coming indie haven in the Midwest.

INDIANAPOLIS, Indiana – Sunlight, by the brewery Sun King, is a light, satisfying cream ale sold mostly in Indiana. As a local beer, the name is apt: My brief visit to the state's capital was suffused with baby blue sky, chipper people, and delicious farm-grown food.

My boyfriend and I came to visit friends — both husband and wife, avid foodies from the East Coast, had fallen in love with the town. We decided to see what all the fuss was about.

What we found was a renaissance of the hip (and hipster) variety, giving credence to the recent media recognition it's received. The food scene alone marked a transformation for the birthplace of Wonder Bread — a city of less than a million enviably well-fed Midwesterners. 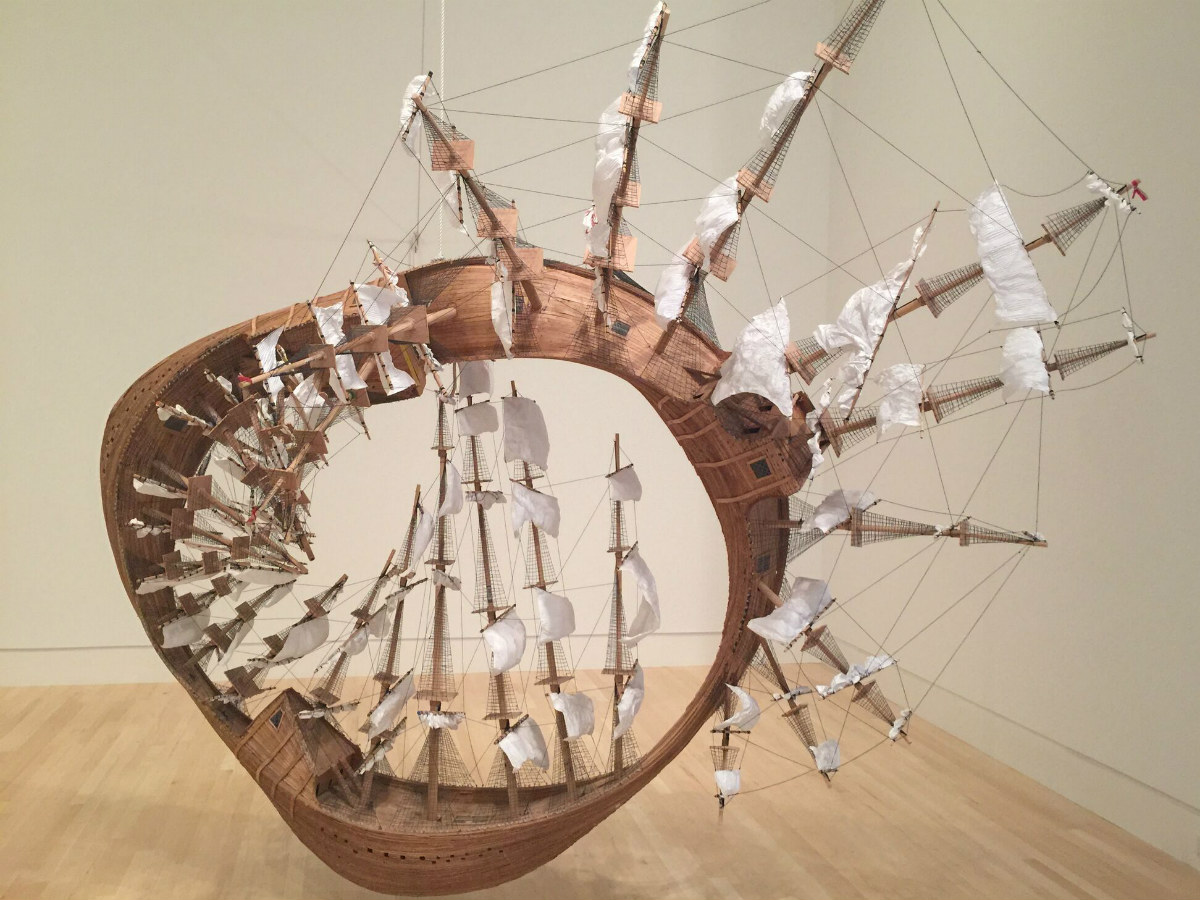 Modern art at the Indianapolis Museum of Art. Photo by Jean Tang.

If You Only Do ONe Thing

Visit IMA
The Indianapolis Art Museum blew us away. Four exhibit floors with four wings each, the building itself is manageable in a few fulfilling hours. It spans the globe and eras, with current wings dedicated to Asia and Africa (note multiple sarcophagi), mid-century industrial design, and historic American quilts. But the top floor is what got us — and got to us. Modern art typically leaves us mystified and impatient, but here we lingered, marveling at the many well-chosen works. What surprised us most was a multi-room "animated painting" installation by Dutch artist Jacco Olivier and the bite-sized, purpose-fit nooks and crannies for screenings, sculptures, and specially commissioned exhibits. You'll want to leave time to explore the extensive grounds: a 100-acre nature park, a greenhouse garden, an iconic modernist property, and a historic mansion.

Stroll the Cultural Trail
Winding through six cultural neighborhoods, the ambitious Indianapolis Culture Trail project removed a lane of traffic from its downtown roadways, replacing it with a smooth, if meandering, bike path. In retrospect, we might have ditched the bikes, picked one or two neighborhoods, and done it on foot — a great way to take in sites like the monuments on American Legion Mall, examine the public art, and stop and play at the museums and canal access points en route. 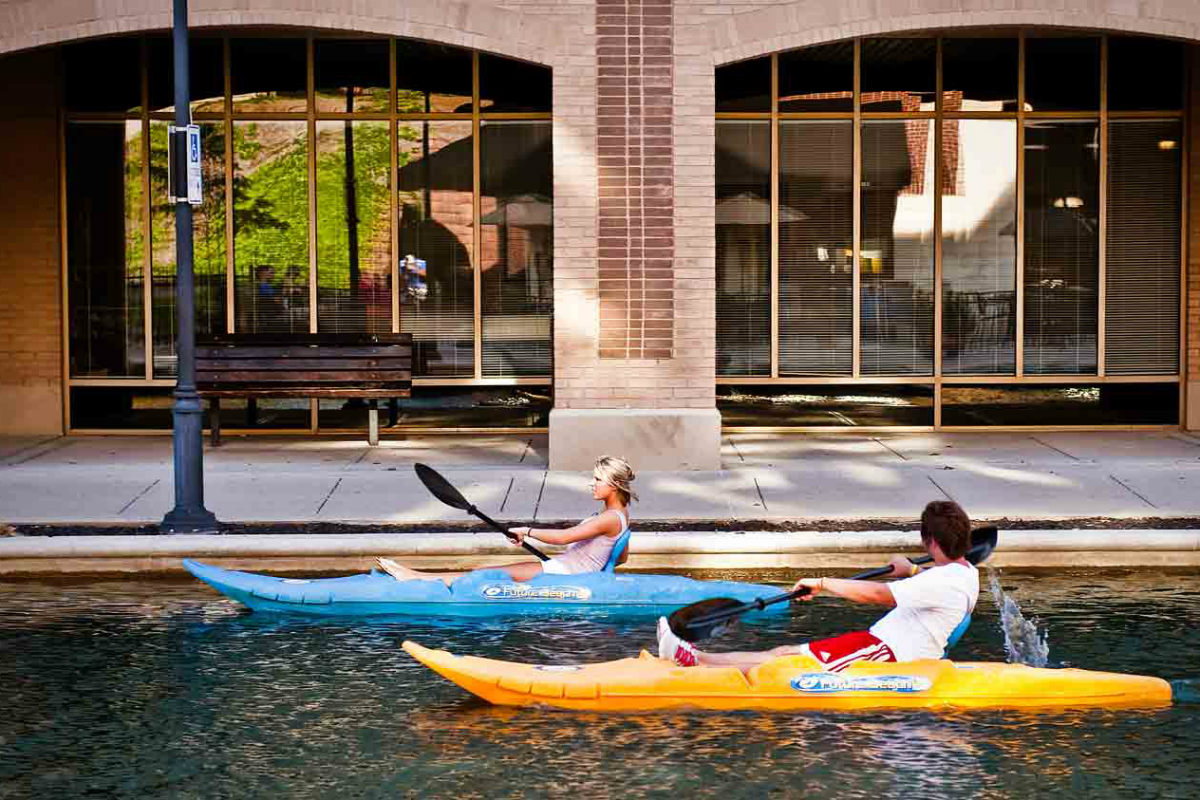 Pedal Boats
The Central Canal clefts downtown from 11th Street to the massive Indiana State Museum. From March 23-November 30, you can rent pedal boats or kayaks at Wheel Fun Rentals, then pedal or paddle your way down the calm, flat waterway. It's great fun. Just bring plenty of sunblock!

Shop Mass Ave.
The head of Massachusetts Avenue, the northernmost bit toward Routes 65/70 on the 800 block, is dense with hipster cred. You'll see it best at shops like The Best Chocolate in Town (#894, where handmade sweets include truffles and turtles), Mass Ave Wine (#892, with more than 100 bottles priced under $15), Crimson Tate Modern Quilter (#843, because of course the sewing renaissance is thriving around here), and Homespun (#869, a wonderful source of well-made souvenirs, albeit not all local). We made several trips to Natural Born Juicers, a haven for a healthy and elixir-rich array of smoothies, cold presses, and other delectable natural medicinals. 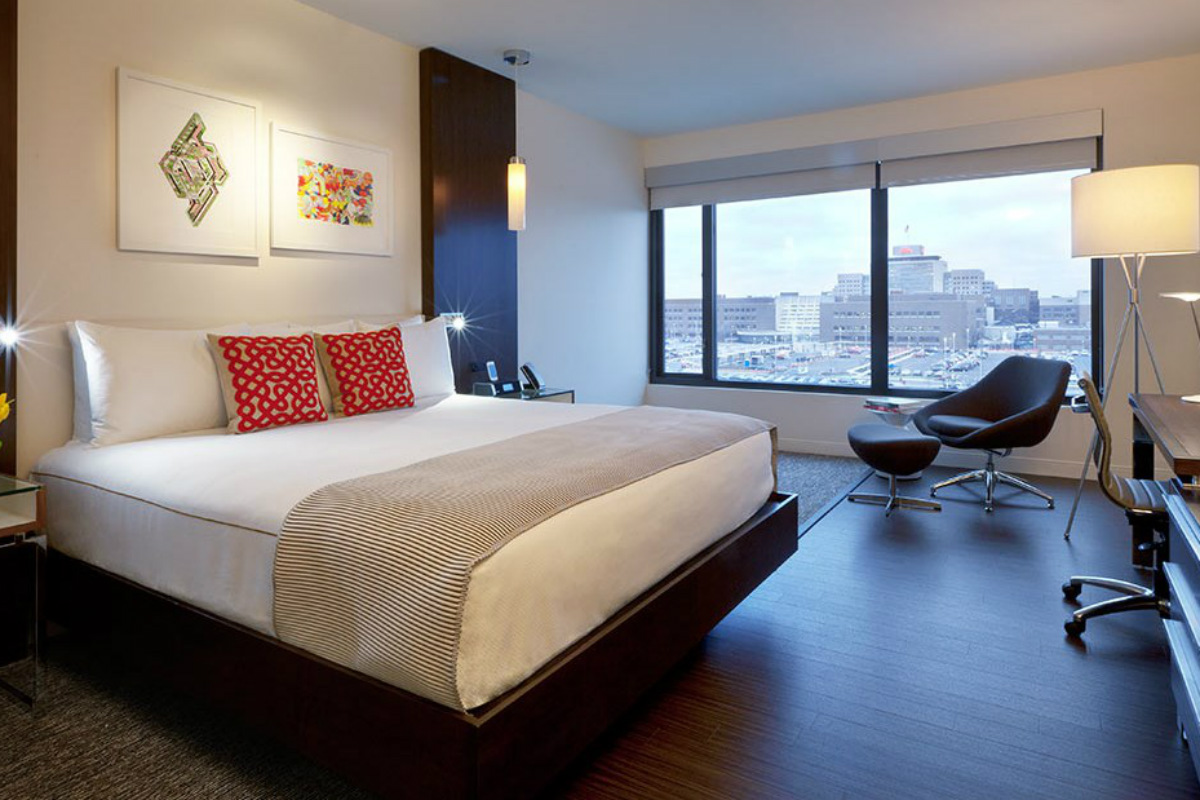 Take in Jazz
The remarkable thing about Jazz Kitchen isn't the decor or food: It's the jazz. Located in the exploding SoBro (south of Broad Ripple, which I'd like to rename SoBripple) neighborhood, we caught Wes Montgomery covers by local artists Clifford Ratliff and Steve Weakley and scanned ahead to weeks' worth of remarkable artists and the annual Indy Jazz Fest in September.

Alexander Hotel
With its lobby lounge on the second floor, something about this downtown hotel feels magically suspended. Design touches are evident everywhere: an art installation on the ground floor, antique French walnut bureaus encased in acrylic (forming tongue-in-cheek front desks), striped carpets throughout the roomy guest rooms, thoughtfully silent pocket doors for guest bathrooms. Sadly, we never made it to Plat 99, the hotel's tapas restaurant, but it looked great and served killer bags of truffled popcorn. The hotel has a sparkling new gym but no pool, so when I wanted to swim, a helpful concierge directed me to the brand-new YMCA across the street. 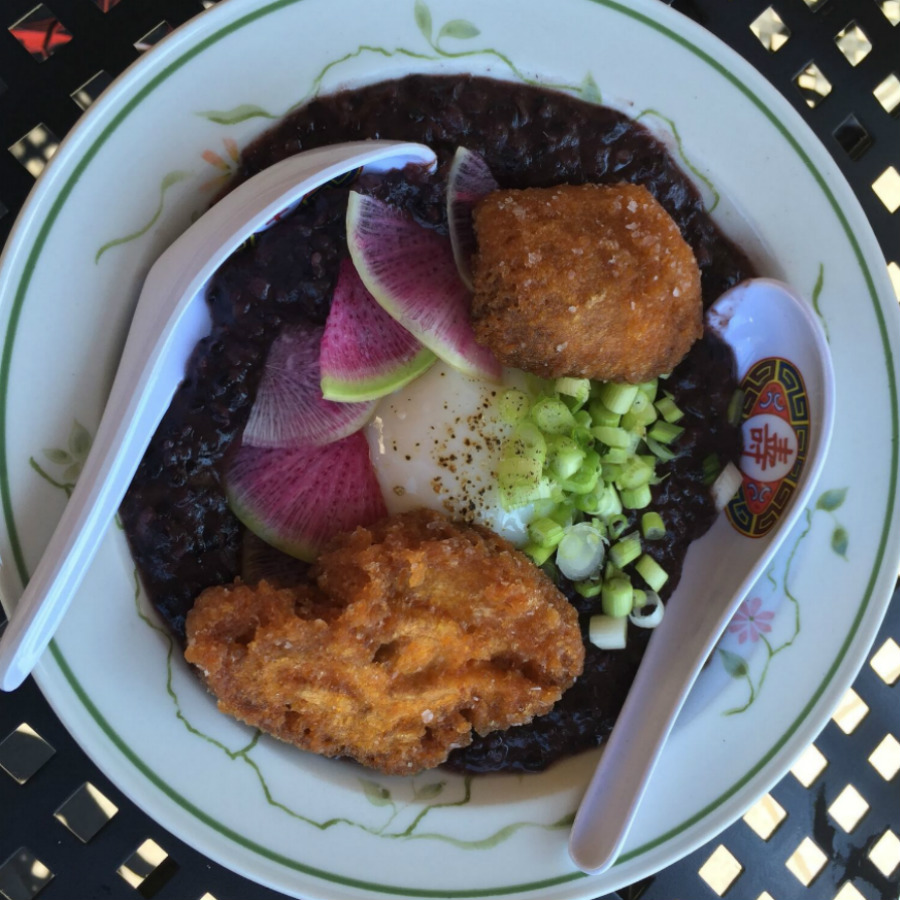 The black congee at Milktooth. Photo by Jean Tang.

Milktooth
A serious and sumptuous restaurant, Milktooth is all about the daybreak meal: breakfast. Chef Jonathan Brooks has created a daily changing menu of classics and more for his brunch. Perennial items include poppy-shaped Dutch babies (edge-crisped and laden with berries), small corn donuts (hot and dippable, holes included), and a memorable (and moist!) coffee cake. We tried one of the specials, a bowl of smoky black congee decorated with slivers of watermelon radish, scallion bits, a diaphanous poached egg, and two illusory fried lion's mane mushrooms (outside, these looked like crisp oysters; inside, like pork): It was distinctive and delicious, and I'll be thinking about it all winter long. There's a whole specialty menu for coffee drinks (such as the Dirty Apple Jack), but the smart move is with the delicious Guatemalan house coffee.

The restaurant has a no-reservations policy, so unless you show up when they open, get ready for a weekend line.

Tinker Street
The burrata arrived — and was gone in two minutes. Granted, we were hungry, but chef Braeden Kellner had adorned the plump, white round with shreds of sweet tomato, and our table downed it, with and without the little rounds of baguette and crackers. An heirloom tomato salad with a thin blue cheese dressing reminiscent of thin, sharp buttermilk suffered the same fate, as did angel-thin squash “noodles” in a spicy, thoroughly Western take on pad Thai. And such is the case at this farm-to-table cottage, where you can dine in the autumn breeze, order from an impressive wine list, and share innovative but comforting dishes. We also loved the Colorado bison strip loin, sweet and fiery with a corn chili and chunky ground cherries (a cross between a tomato and a cherry), as well as rare slices of seared beef over succotash. But our meal topper was ice cream with a flavor somehow more corn-like than corn itself, like a sweet frozen summer. 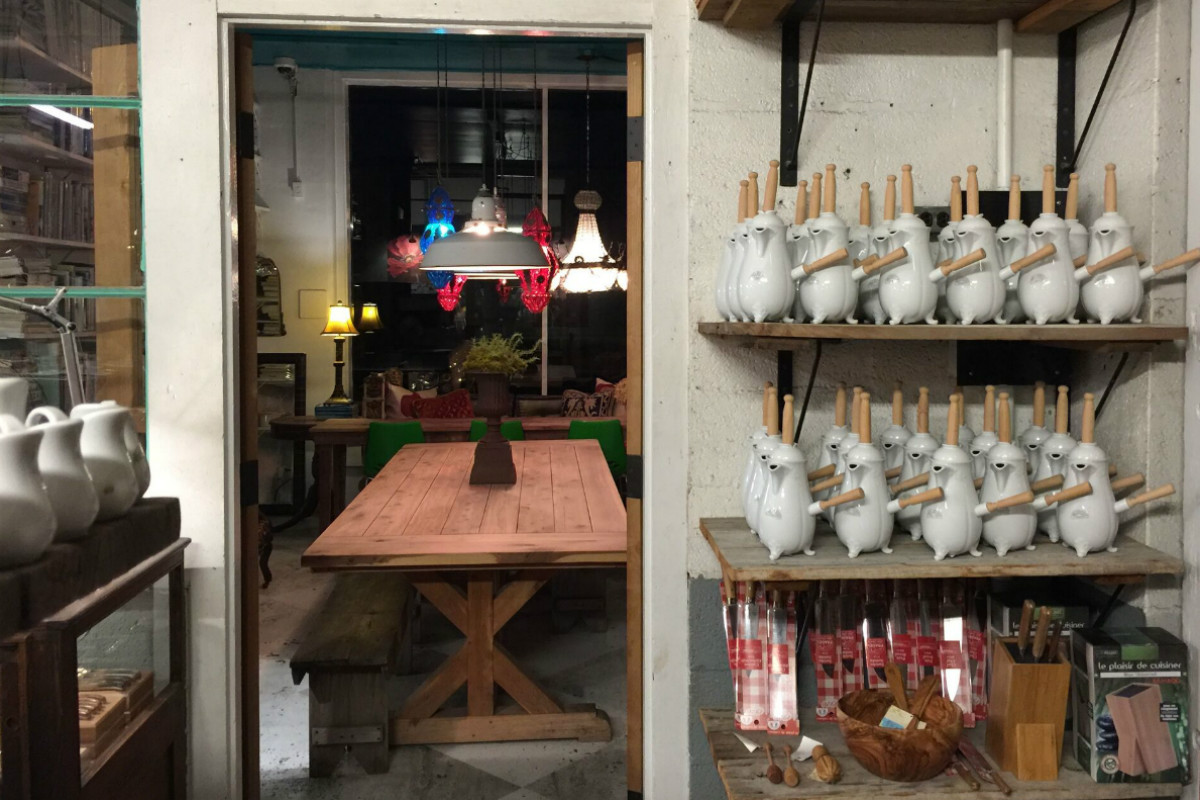 On the shelves at Locally Grown Gardens. Photo by Jean Tang.

Locally Grown Gardens
A combination produce store, home goods boutique, restaurant, and bakery, the first thing that struck me about this glorified general store was its easygoing but completely bourgeois vibe. Ambiance is commerce here: Outside and in, there are handmade tables and benches to sit on (they're also for sale) and stacks of French porcelain and Laguiole cutlery sets in a rainbow of imported prints and hues. Despite all that, my friends made it clear from the outset that we were here for the pie. And pie we had. We intended to try sugar cream or peach, but in three sittings (as many pies in as many days), we never got beyond the tiny, perfect, juicy-sweet blueberries encased in a crispy-hot crust and topped with dollops of ice cream from Tiny House Treats, an ice cream shop conveniently located right across the street. Also on the menu: grilled salmon, free range chicken, pulled pork by the pound. But look, the pie is worth the trip to SoBro. Wish I had some now.

How to Get There
My friend, who commutes to Indy from New York City to see his family, tells me that IND feels like a private airport: compact, convenient, and uncrowded. Four airlines fly nonstop from NYC: Delta, United, American, Southwest. Chicago is less than three hours away by car, and Louisville is less than two.

Getting Around
You'll need a car: Things are very spread out. But driving in Indianapolis is a pleasure: scant traffic, flat thoroughfares, easy signage, polite road fellows. Put your turn signal on and watch the lane you're sliding into part instantly to make room.

My friends recommend traveling to Indy when fresh-farm produce is in season. You'll get the most of the tasty harvest. And watch for flash floods!

Casual. In a weekend, I saw plenty of jeans and not see a single high heel.

Explore More of the Midwest

U.S. Road Trips: The Midwest
The State of Your Summer: What to Do Across the U.S.A.
Big Art and Bigger BBQ in Kansas City