Native Carolinian and current New Yorker Cabell Belk grew up on Charleston's wickered, window-boxed charm and still gets weak in the knees for Easter churchyards draped in fleecy wisteria. But if recent trips back South have taught her anything new about palm-fringed piazzas and cobblestoned alleys, it's that they are only part of Charleston's story. Lately she's falling for a new — and decidedly less landscaped — side of town.

CHARLESTON, South Carolina – Gone are the days when Charleston debutantes didn't venture above Calhoun Street after dark. Your society granny may not be brunching on the other side of the Crosstown yet, but there's no denying it — the Holy City's creative center of gravity is shifting north, as evidenced by a collection of increasingly guidebook-worthy micro-neighborhoods blooming near the King and Spring Street crossroads. Instead of covered markets and crab cakes, you'll find maverick letterpress studios, small-batch distilleries, selvedge denim purveyors, bakery happy hours, and more than a handful of restaurants inhabiting repurposed industrial buildings.

Indigo & Cotton
79 Cannon St.; +1-843-718-2980
The plaid pocket squares and reversible bow ties at this 21st-century haberdashery are worthy of a Charleston society soirée, but you don't need an address on the Battery to fall for the smart selection of Shinola watches, vintage Levi's, and statement socks in dapper prints. 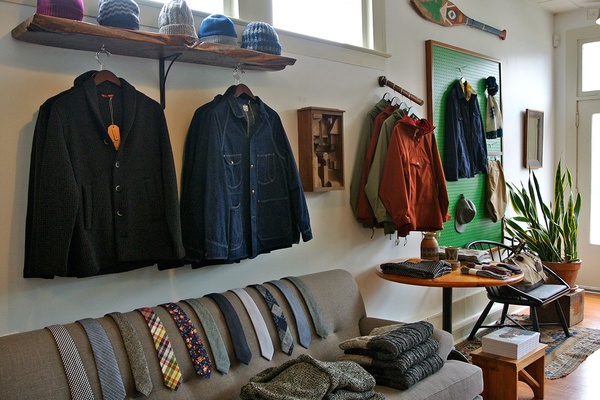 The modern-day fittings of a Southern dapper don at Indigo & Cotton. 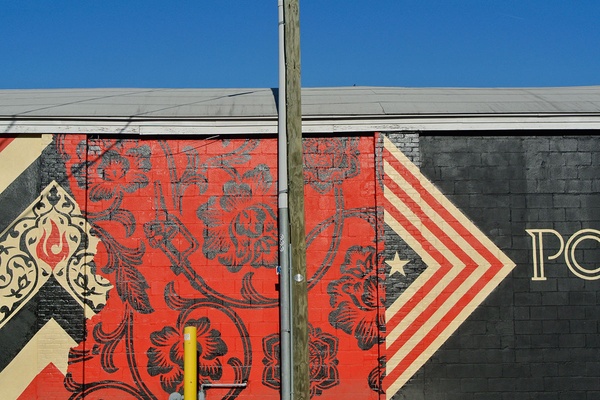 Butcher & Bee
654 King St.; +1-843-619-0202
One of the original Upper King Street pioneers, this BYOB craft sandwich institution is open until 3 a.m. on weekends. Queue up with just-off-the-line local chefs for late-night favorites like sweet potato banh mi and grilled gruyère with creamed kale. Daytime hours are famously limited, but next door at younger sibling takeaway spot, The Daily, early birds can pick up fried egg sandwiches with harissa ketchup and fontina, fresh-pressed juice, and Counter Culture espresso starting at 7 a.m.

Chez Nous
6 Payne Ct.; +1-843-579-3060
Lovers of rosé and Le Creuset have been swooning ever since this darling restaurant opened in a tiny alley off Coming Street. And really, you have to have a hard heart not to fall for the buttercream-painted 1835 row house with handsome wooden tables clad in mismatched vintage cutlery and a proud old chimney full of marvelous scabbed bricks. The northern Mediterranean menu — handwritten daily — may be concise (two appetizers, two mains, and two desserts), but it is lovingly composed and brilliantly executed. Always order both desserts. No one should have to choose between persimmon ice cream and ricotta crostata. 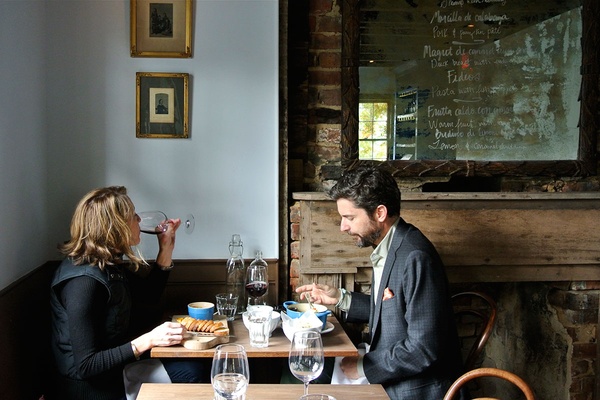 Sit back and give in to the allure of Chez Nous. 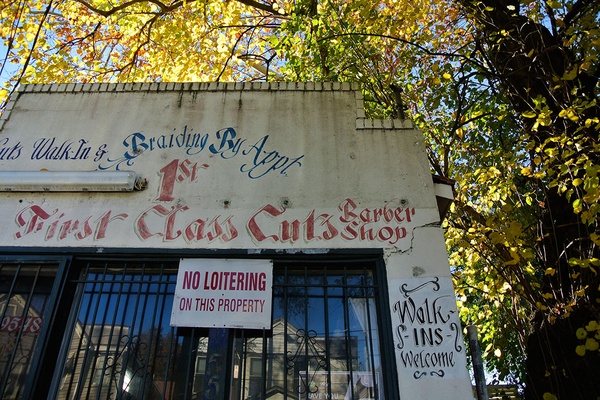 Holy City Barber
684 King St.; no phone.
Indulge in a bygone ritual at the single-chair barber shop, where you can spin blues on an antique record player and sip bourbon while waiting your turn for a hot shave. Just don't try to make an appointment. And don't even think about bringing your girlfriend.

Leon's Oyster Shop
698 King St.; +1-843-531-6500
Not that fried chicken and oysters are ever a tough sell, but Leon's is the ultimate crowd-pleaser. A meal here can just as easily skew decadent — if you spring for the "big chicken dinner" and pair it with bubbles — or down-home (hush puppies, six-packs, and soft serve with jimmies). With a daily catch and no fewer than ten seasonal side salads, the menu is accommodating, even of calorie-counters. The cannily redesigned space, formerly Leon's Paint & Body Shop and now a study in ramshackle chic, will speak to coolhunters and Brooklynites, but the vibe here is refreshingly come-one-come-all.

Mac & Murphy
74 1/2 Cannon St.; +1-843-576-4394
Back in 2009, a pair of visionary paperphiles took a chance on a still-peripheral stretch of Cannon Street. Six years later, their postcard-sized print shop is a destination for millennial scribes of all stripes. Use the intimate backyard writing garden to knock out your thank-you notes on Rifle Paper Co's limited edition Rainbow Row greeting cards — or splurge on a gold foil and letterpress map of the Charleston peninsula from local creative studio 42 Pressed. 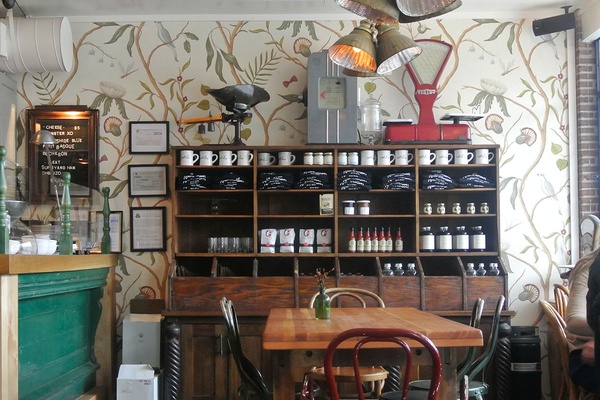 A nod to the old world at Saint Alban.

Saint Alban
710 King St.; +1-843-531-6868
Some mornings require an expeditious caffeine hit; others call for latte rosettas and antique china. Think of Saint Alban as an homage to the European café of old, but with parking and takeaway cups and a maple-ricotta slathered buckwheat waffle on the breakfast roster. The newly-opened Upper King Street charmer (read: hand-illustrated menus, Art Deco light fixtures, and floral wallpaper) accedes to every ritual and occasion, whether you need a fireplace or a patio breeze, a honey cortado or a negroni, Wi-Fi access or a freshly printed New York Times. But if you want the owner's opinion, there's nothing more civilized than scones and sherry at 11 a.m.

The Alley
131 Columbus St; +1-843-818-4080
The lineup of vintage arcade games at this distribution warehouse turned retro bowling bar will take you straight back to 1992. Reserve a lane in advance or geek out on skee ball, air hockey, and Mortal Kombat. Then break for cornmeal-fried chipotle shrimp po' boys.

Xiao Bao Biscuit
224 Rutledge Ave; no phone.
At first glance, this hulk of an old filling station looks like anything but the scene of your next lemongrass ginger beer cocktail. But experimental Asian soul food and a serious playlist have turned the scruffy parking lot into a hotspot hangout. The only thing it's fueling these days is a citywide obsession with okonomiyaki (Japanese cabbage and scallion pancakes). 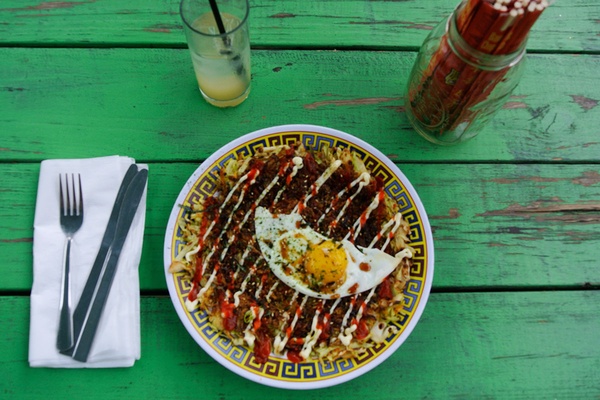 Get in on the okonomiyaki craze at Xiao Bao Biscuit.