Fashion photographer and caffeine enthusiast Nicolas Clerc trained in New York before bringing the artisanal coffee movement back home to Paris. Lindsey Tramuta, the writer behind Lost in Cheeseland (one of our 24 Best Blogs and Websites 2014) talks to the owner of the charming Parisian coffee bar Télescope. Photographer Ashley Ludaescher snapped the scene.

PARIS – After more than ten years working as a photographer for the likes of Vogue, Chanel, and Hermès, it's behind a bar that Parisian Nicolas Clerc telegraphs his art these days. He wasn't reared on artisanal coffee and roasting methods, but an opportunity to train with some of the bean movement's pioneers in New York elicited both a personal and professional transformation. A sleek Marzocco espresso machine and crates of milk from Normandy cows may have largely supplanted his camera equipment, but the winsome photographer-turned-barista applies the same keen eye and deft hand to the aesthetics and taste of each cup he serves. 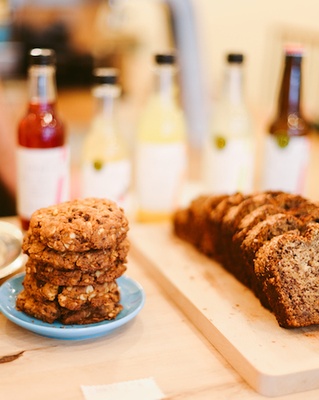 Nicolas opened Télescope in March 2012 on a formerly sleepy street in the 2nd arrondissement, tucked behind the Palais Royal's iconic arcades. He has been wildly successful at cultivating a community that welcomes an eclectic crowd of ardent coffee fans, style mavens, and urbane young parents alike. He does so with a quiet confidence and genuine concern that levitates his coffee shop far above the masses.

We caught up with Nicolas at work and then joined him for his post-work stroll through the Palais Royal gardens and an apéro at Le Bougainville to talk influences, art, and the spirit of Télescope.

Where did you grow up?
I was born in Paris but after my first birthday we moved to Nice, where I grew up. My parents were getting set up as doctors and didn't want to practice in Paris. So I stayed in Nice until my early 20's and then I went off to school in Switzerland.

Is that where you studied photography?
Yes, I went to Switzerland to study at the École de Vevey and then I came back to Paris to work as a photographer. Well, I should say, a photographer's assistant! I did that for two years and I honestly had some of the greatest moments of my life. 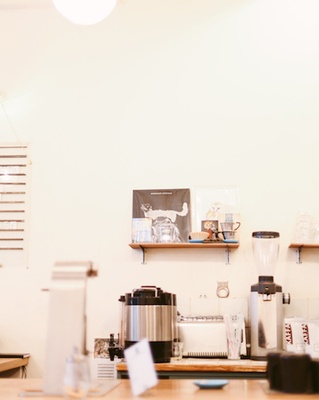 You're living the dream! You're on fashion shoots in Venice, around so many models and fashion photographers; you're shooting for Vogue; you're flying to South Africa, then heading back to Paris only to pick up another flight for a shoot in Saint-Tropez, and I was a part of the team. To adjust the photographer's camera, sure, but I was part of it nonetheless.

I think I speak for coffee evangelists everywhere when I say that it was high time someone launch a bean movement in Paris. How does it feel to be part of it?

Great. Incredible. We've had so many people come in and really ask us about what we're doing. "This tastes amazing! Where does this coffee come from? I see that you're about brewing, and roasting, and method. I see there's a difference between French press, AeroPress, Calita. I see that temperature of the milk is important."

We were struggling to show people that we're doing something nice. And now, all of a sudden, Télescope is part of the interesting things people want to do when they're in town. Maybe it's because of recent press, maybe it's the good weather, or maybe it's the fact that enough people know that it's no longer an adventure to go to a coffee shop. 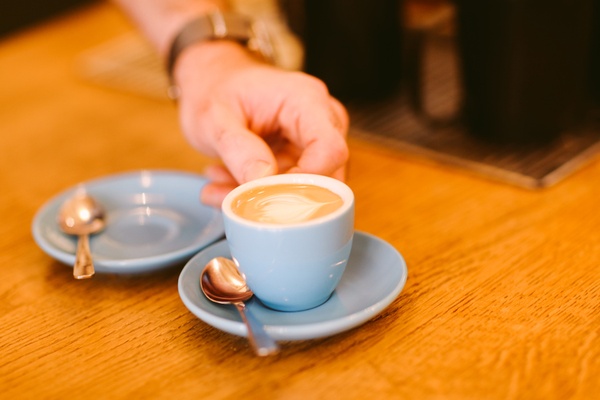 So you're getting an influx of people who already have a foundation in coffee?
When I first opened the shop, I thought it was unnecessary to explain to clients what they were drinking. But one of the guys I worked with insisted it was important to explain the backstory. And I see that; education is important. More and more, people want to know the provenance of the coffee they drink, so this is a delight for us.

When did you develop an interest in artisanal coffee?
The first time I had a good one. Having a good coffee — seeing how your taste buds react and seeing how your brain reacts — is the start. Then you see how fun it is to make, to brew coffee at home. And then you realize how difficult it is, but that it opens up so many possibilities for what you can taste. And once you reach that point, you enter a sort of club or community of coffee fans where you talk about what you've done. I've been brewing this coffee, at this temperature, what do you think? But it's still a developing community and that's exciting. 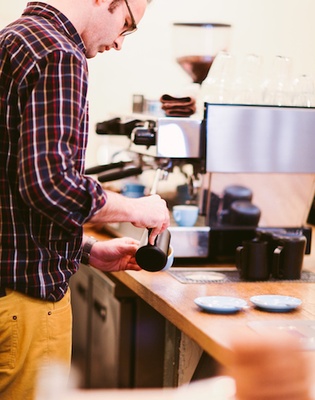 And how did you make the move from photography to coffee?
I had to shoot an article on coffee and at the time, I didn't see why it deserved the attention. The lead photographer said it's because coffee was interesting. I didn't see it. And he said, it's because you're not drinking the right kind. I thought, "You're so snobbish. What's the right kind?" And here I am spending seven days a week working in a coffee shop. My coffee shop.

What makes a good coffee?
A whole chain of people and carefully considered steps. You have to pick the beans right, process them right, store the right, and ship them right; roast, grind and brew them right. This is a good coffee. It involves up to ten people who have to do their jobs right. It's easy to taste when the job hasn't been done properly.

So the basic coffee in brasseries all across France doesn't get it right?
No! It's miseducation. In France, most people expect coffee to be bitter and to wake them up. They put sugar in, close their eyes and down it in one or two gulps. It's like medicine.

You spent some time in New York training with some of the world's top baristas.
I went to New York and trained at Intelligentsia and Blue Bottle. All of the people I trained with were super open and welcoming. You express an interest in coffee and they give you almost all the knowledge they have. I was just a random French guy saying, "I like coffee and want to open a coffee shop in Paris." But they said, "Ok, come back tomorrow and we'll brew some coffee together." This was amazing and life-changing. 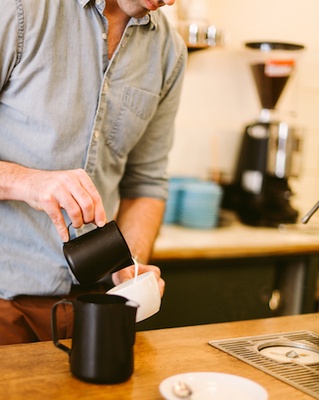 I went to New York for the summer for a change of scenery. I spent the days drinking coffee with friends. I spent the evenings learning to make coffee. But opening a coffee shop wasn't necessarily in my plan.

How did you find the space?
When I got back to Paris, I was still working in photography. Soon after, I ran into a real estate agent I had previously bought a place from and told her I was just back from New York and was considering looking at spaces for a coffee shop. She specializes in apartments but heard there was an Armenian guy selling his space and recommended I take a look.

As soon as I saw it, I knew it was the ideal space for a coffee shop. The place should've been called ghost though; there's a spirit watching over us here.

You think Télescope is haunted?
I'm totally sure. We all feel it in the cellar; there's definitely someone living there. An Armenian family lived here for 60 or 70 years. A granddad in a wheelchair died some ten to fifteen years ago. I'm sure he's still around. I don't usually believe in this kind of thing but I have such a good feeling every time I walk into Télescope. Like there's a friend here. Call it what you like — a ghost, a spirit, or just a feeling. But it's something strong we all feel.

What were the challenges you encountered in opening the shop?
The usual administrative issues (France!). And then the task of creating something that doesn't exist yet. It's not about convincing people that what you're doing is better than everyone else, but instead offering your unique perspective and interpretation and hoping they find it appealing. 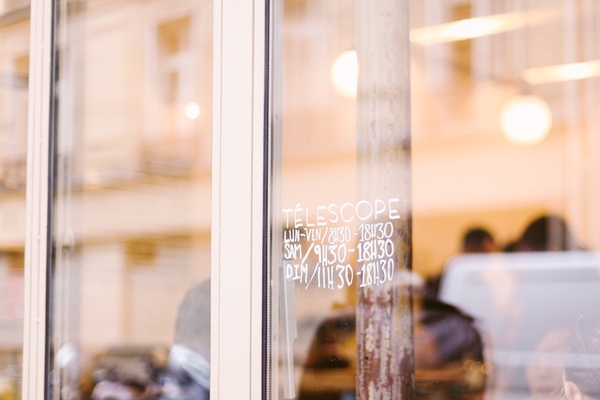 At any given moment, you'll be playing jazz or hip hop at the cafe. Can you talk about your style choices?

The afternoon tends to be heavy and a bit louder than morning. I think it's important to surprise people. A while ago we had a table of four grannies — I mean, really, they were over 75 — and I was playing Talib Kweli. They stayed for hours! It was a magical moment. I think whatever kind of music we're in the mood to play, it's part of the whole experience and lets people to take a break from their lives.