Jack's Wife Freda's first location in New York City opened on Lafayette Street in 2012, and it's been packed ever since. It's easy to see why: the food is terrific, like the green shakshouka featured in their new cookbook, Jack's Wife Freda: Cooking from New York's West Village.

Shakshuka (shahk-SHOO-ka) is a dish of Tunisian origin, possibly dating back to the Ottoman Empire, and possessively beloved by Libyans, Egyptians, Moroccans, Algerians, and Israelis alike. Simply put, it's a traditional Middle Eastern breakfast and lunch dish consisting of baked eggs and tomatoes. Growing up in Israel, Maya tried many different incarnations — each family's variation subtly different and fiercely defended. We knew we wanted a shakshuka on our menu and it needed to be spectacular. This interpretation of the dish lends a more Latin American spin to the classic tomato sauce. We love the fresh zestiness of the tomatillos, the richness of the egg yolks, and the doughiness of the toasted challah. Ours may break with tradition, but we think that rolling the word "shakshuka" off your tongue is nearly as delicious as eating our version of it!

1. Peel and quarter the onion and place with the garlic cloves in a small baking dish. Drizzle with the olive oil and 1/2 tsp. of the salt. Cover with aluminum foil and bake for 30 minutes, or until very soft when pierced with a knife. (The onion and garlic can be prepared ahead of time.)

3. Place the peeled tomatillos, bell pepper, jalapeño, and cilantro leaves in a food processor with the roasted onion and garlic. Process until very smooth; it will have a salsa-like consistency.

4. Transfer to a medium saucepan. Add the coriander, cumin, and remaining 1 tsp. salt. Bring to a simmer over medium-high heat and cook for 2 to 3 minutes, or until the tomatillo sauce is heated through. Be careful not to cook too long or your sauce will discolor and the taste will change. Add 1 tbsp. of hot sauce at a time until you've hit your desired spice level.

5. To assemble the shakshuka: Oil a cast-iron pan and set it over low heat. Crack the desired number of eggs into the pan and cover. Allow the eggs to cook sunny-side up until the whites are fully cooked but the yolks remain soft (you can, of course, cook the yolks through if that is your preference).

6. Once the eggs are cooked, liberally spoon the shakshuka sauce on top of the eggs and garnish with chopped parsley. Serve with toasted challah or French brioche. 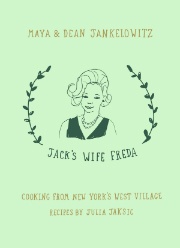 15 Recipes That Will Take You Around the World
26 Gifts for Hungry Travelers
Dangling Carrot, No Stick: A Recipe for Roasted Roots with Chermoula