The Jane Austen Society of North America had their annual meeting this weekend in Brooklyn. Cue the lectures about "Sex, Money, and Power." And don't forget the Regency fashions.

"The world is a book and those who do not travel read only one page." - St. Augustine

BROOKLYN – On Mondays, people return to work and ask their colleagues a routine, "did you have a good weekend?" Sometimes you learn something useful, that a new sushi restaurant opened in your neighborhood.

How could I explain to my Los Angeles co-workers that this weekend I found a portal that transported me to England in the early 1800s? And that I had found the gateway inside the New York Marriott at the Brooklyn Bridge, just off the 2/3 subway line? 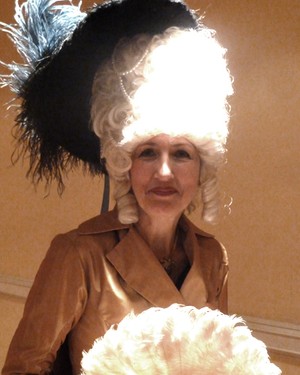 It all started three months ago when my mother, who is a librarian and bibliophile, invited my twin sister and me to join her for the annual general meeting of the Jane Austen Society of North America in Brooklyn.

Full disclosure: I've only read two Jane Austen novels and I still haven't seen Colin Firth in the excellent 1995 BBC adaptation of Pride and Prejudice. But I love an excuse to spend time with my mother and sister and I thought that getting a glimpse into a world of ardent Jane Austen fans (aka Janeites) would be an interesting anthropological experience. I've always wanted to go to Comic-Con but have never made it. How different could Austen-Con be?

The first JASNA group meeting took place in New York City 34 years ago with 100 members. Today JASNA numbers 4,700 members, and about 750 attended this year's conference, whose theme was "Sex, Money, and Power in Jane Austen's Fiction." The highlights for me included keynote speeches by Anna Quindlen and Dr. Cornel West. No, not the most obvious Janeites.

Anna Quindlen might as well have been a rock star when she took to the stage for her talk entitled, "Jane Austen is my Homegirl," and asked the audience to recite the first line of Pride and Prejudice. I'll admit I got goose bumps hearing several hundred people recite in unison, "It is a truth universally acknowledged, that a single man in possession of a good fortune must be in want of a wife." I'm surprised I didn't see lighters flickering in the audience.

Anna Quindlen spoke so movingly about how Jane Austen provided her with an example and the inspiration of an "ordinary girl who became immortal by pushing a pen across paper."

Dr. Cornel West mentioned that we are all there because Jane laid out worlds that seize our souls and capture our imaginations. He was preaching to the choir, and they loved every syllable. 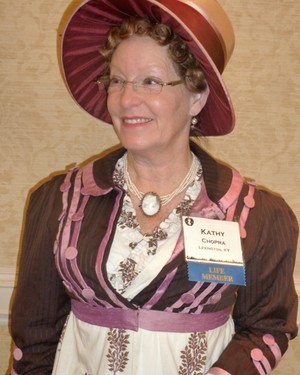 It was abundantly clear that all attendees had had their souls and imaginations captured by Jane. I met new members and lifetime members, academics and ardent fans. I asked them what got them interested in JASNA. (I mean, it's one thing to dig the books; it's another thing to travel across the country to a conference about them.) Some had discovered Austen as adults. Others were hooked by the Regency fashions and a chance to do some English country dancing.

I especially enjoyed learning about Regency fashions from Kathy Chopra and Bonny Wise from the Greater Louisville Region JASNA (there are different regional JASNAs around the United States). Kathy explained the names of her garments, including the undergarments, and how she found great ladies on etsy.com to make them for her. "Just type in Regency clothing into etsy and you'll find wonderful things," she explained. (Here's what you'll find.) I had noticed how well dressed the ladies from Louisville were and I asked Kathy if different regions ever get into fashion wars. "Oh, no," she said. "That would be very impolite." 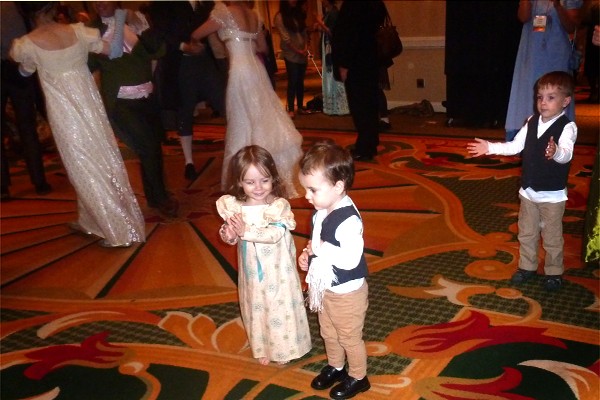 The Janeites like to start them young. (This is so totally cute!)

Some attendees, like Kathy and Bonny, wore Regency outfits throughout the conference. Many reserved their dressing-up for the Regency ball on Saturday night. Elaborate outfits. Serious wigs. There were even stuffed animals. And lots of English country dancing. The collective enthusiasm was infectious. This was more than a BBC miniseries moment of 1800s England: This was fantastic time travel with my mother and my sister to a different time and a different world.

Lots of Pride, a Little Prejudice - The New York Times reports on the conference.

A Literary Tour of Paris