Le Meurice, one of the grandest hotels in Paris, has a perverse and naughty side, too.

PARIS – On the surface, Le Meurice looks like the picture of civility. The hotel is located under a beautiful stone arcade that faces the Tuileries Garden, right on Rue de Rivoli. Just a few doors down, under that same arcade, is Angelina, the grand salon de thé famous for its dark hot chocolate and Mont Blanc pastry, which manages to be charming despite all the tourists. 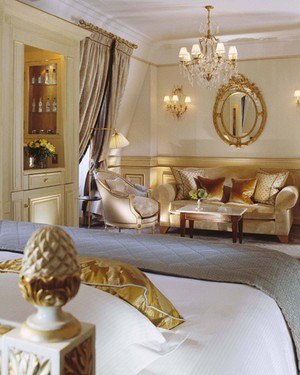 Apparently, Le Meurice was Paris's very first luxury hotel, open for business since 1835. I like to imagine a richly appointed horse-drawn carriage rolling up the street, coming to a stop in front of the arcade that marks the entrance, and a woman in a rustling, layered silk creation and ridiculous feathered hat stepping out — with assistance, of course — before disappearing again under the arches.

But once inside, I encountered the unexpected. In the dining room, where we took our breakfasts of fantasy-fulfilling silver platters of croissants and brioche, were perverse Philippe Starck touches tucked discreetly among the baroque grandeur of crystal chandeliers and gilded scrolled settees. They were details that reward those subversive enough to notice. A jagged sculpture that could have been an ice carving or broken glass atop a security fence. Curving arm rests of a cushy chair morphed into the neck of a swan. The feet on certain chairs were dressed in women's shoes. It didn't surprise me, then, when I learned that one of the muses for the 2007 Starck redesign was Salvador Dalí, the master of all that is twisted, and a onetime frequent guest at Le Meurice. Even the restaurant here is named after him.

On another occasion, I passed the small but noted bar just off the lobby, which was already full of beautiful people by 8 in the evening. I didn't stop in for a drink, but I did smell the scent of fresh herbs being muddled by the bartender, even though he must have been standing a good fifteen feet away. It's the little things. 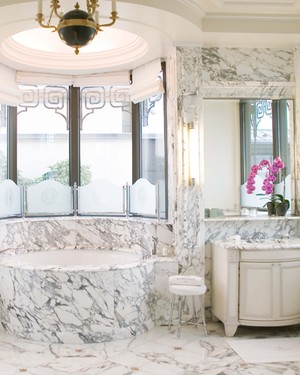 In our room, the bathroom was king. I distinctly remember it being almost the same size as the bedroom, with a formidable square bath in the middle of the floor, a sprawling vanity on one side, and the shower in the far corner. The whole thing was shockingly bright — light bouncing off marble, every surface sparkly and clean. It was toasty and warm. I could have moved in.

We checked out just before Paris Fashion Week. Standing beside me at the concierge's counter was a skinny, unkempt fashion type wearing a snug coat with his collar flipped up. He was holding a skinny, unkempt dog, naked, with a collar of fur around his skinny face. He was checking in for Zac Posen. I guess we left a day too soon.

Check our Paris Guide for restaurants, shops, and fun things to do.

All photos courtesy of Le Meurice.