There's a new category of travel: travel for the family, or specifically, for the family tree. Lisa Parrish headed to a remote village outside Ulm, Germany with her family, a rental car, and minimal German language skills in search of her ancestors. This is how it unfolded.

ULM, Germany – I have always thought travel was for either business or pleasure. But the popularity of websites like ancestry.com and TV shows like Who Do you Think You Are have given rise to a new category: travel for family. Humans are innately curious to know where they come from, and now we have more tools than ever to figure it out. So people are increasingly journeying to find their roots, perhaps hoping to encounter a distant relative. I should know: My family and I had quite an experience looking for my father's ancestors in a remote village in southwest Germany.

Originally from Ohio, I moved to Berlin a year and a half ago after ten years living in New York. My parents decided to take a big trip to Europe last spring to spend time in Berlin and venture through Europe. An adventure it was: A major component of the trip would take us to a village 30 miles outside Ulm to walk the grounds where my father's ancestors once lived. Our "guide" was a very old family tree that indicated that his great grandfather, Gustave Geiger, came from a small village called Neuburg. My father did his research, spending days on ancestry.com, putting together the pieces.

Finally, after talking about it for 40 years, we were doing it. We were going to Neuburg to look for the Geigers. 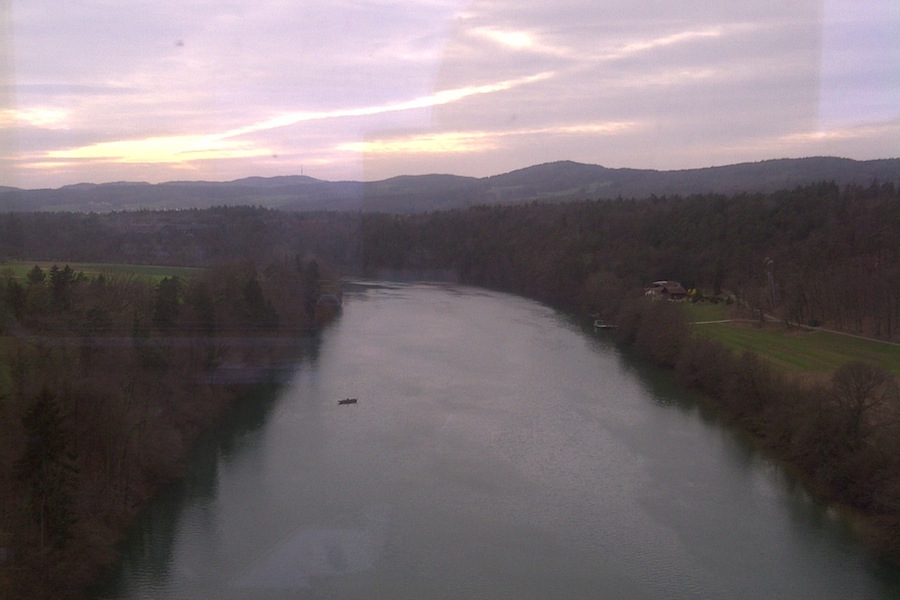 Passing the Danube along the way.

After a week in Berlin, a few days in Prague, another train ride, and a few days in Munich, we rented a car and drove to Ulm, where we spent two nights before driving to Neuberg. I had been teasing my father: "What are you gonna do, walk through this village asking for Geigers or wear a sign around your neck saying 'looking for Geigers'?" To say nothing for the language barrier. I can communicate a little in German, but my parents know no German at all.

The night before we set off, my dad said, "If tomorrow is a bust, we can head back into Ulm, have lunch, and call it a day." My mom and I looked at each other and thought, "ugh, he's going to be disappointed." I asked him what he thought we would find. He said, "I don't know. Let's just go to the church and see if we find anything."(Churches in old villages often keep the best town records.) 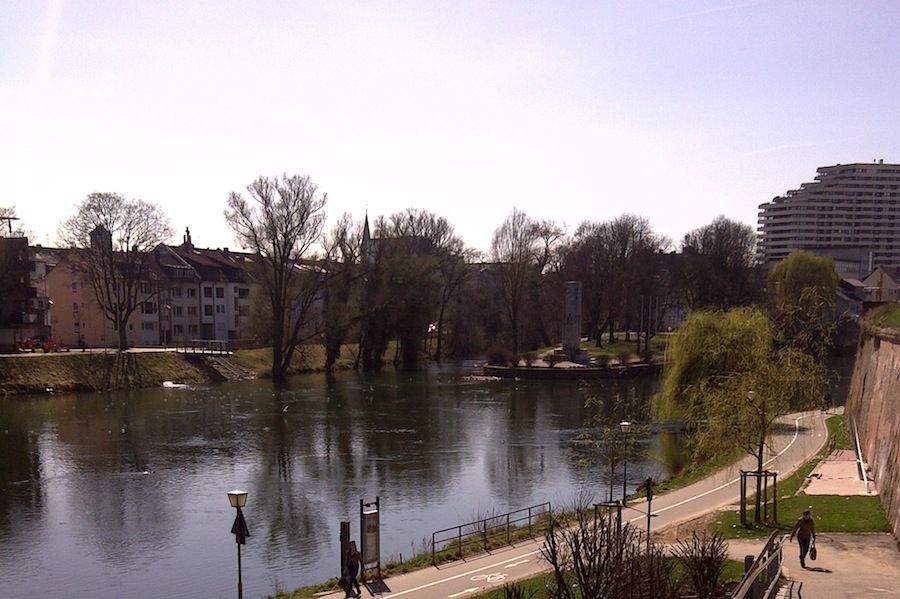 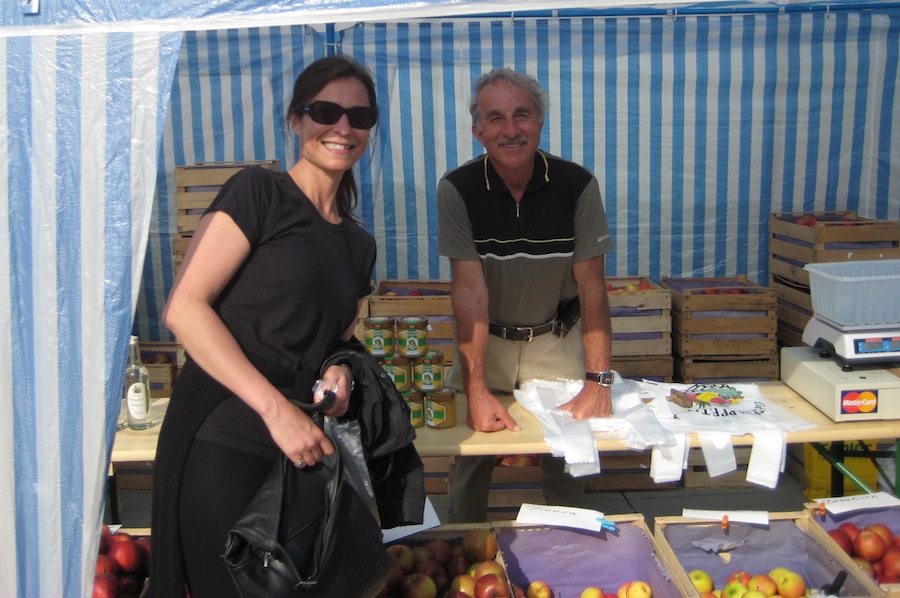 A cute apple merchant outside Ulm who looked like the author's Uncle Bill.

The next morning, after years of research, discussion, and anticipation, we realized we were in the middle of a foreign country on the outskirts of anything urban with a stick shift rental that only my father could drive and nothing but hope and a family tree as our guide. It was time.

We plugged Neuburg into the GPS and set off. I sat in the back seat, wondering how the day would go, hoping we could at least find the village.

Lo and behold, the spires of a modest, pretty white church came into view, along with a cluster of gray houses, then another, and another. There were some fifteen houses total in this village. We pulled up into the church lot. As I walked ahead, I was startled to encounter a tombstone with big letters that read "GEIGER."

This was good! We were in the right area. This was not good: It was a tombstone. I had been hoping for living relatives. 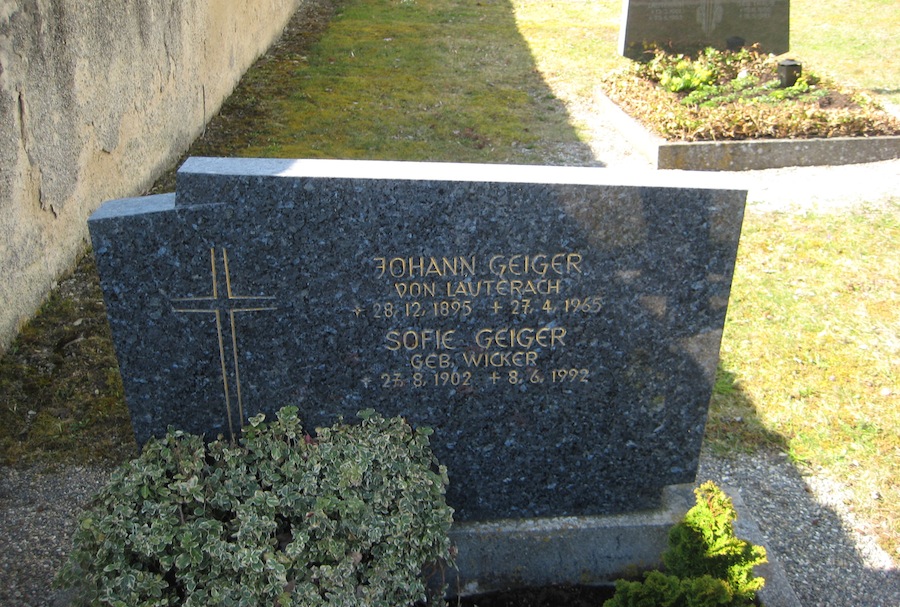 A promising start: a Geiger tombstone.

As we roamed the grounds of the church, I overcompensated, saying how cool it was to be walking on the grounds of our ancestors. It was something, right? My dad seemed positive, but I knew he would be disappointed if this was, indeed, as good as it got. We would probably never make this journey again.

We noticed a woman watering the flowers around a tombstones. My father tried to talk to her, but she spoke no English. I stepped in and, using my very, very limited German explained who we were and what we were doing there. She seemed happy to help these random Americans, telling us that she had family in Chicago. I managed to tell her "Mein Bruder lebt in Chicago"(my brother lives in Chicago), and we exchanged a few more phrases, some of which I understood, some of which, I had no idea. What I did catch was that she wanted us to wait a minute, "eine Minute bitte." She went back to her watering and my parents anxiously asked me, "What did she say? What's going on?" I replied that I didn't really know but we had to wait. After a few minutes, she directed us to our cars and told us to follow her to the town next door, Lauterach.

She pulled into a driveway, got out of her car, and approached the door. I mean, we had NO idea what was going on. She knocked on the door, and a woman in her early 70s greeted her. They talked and laughed. Mom and Dad: "What's going on? What are they saying?" Me: "I just don't know!" 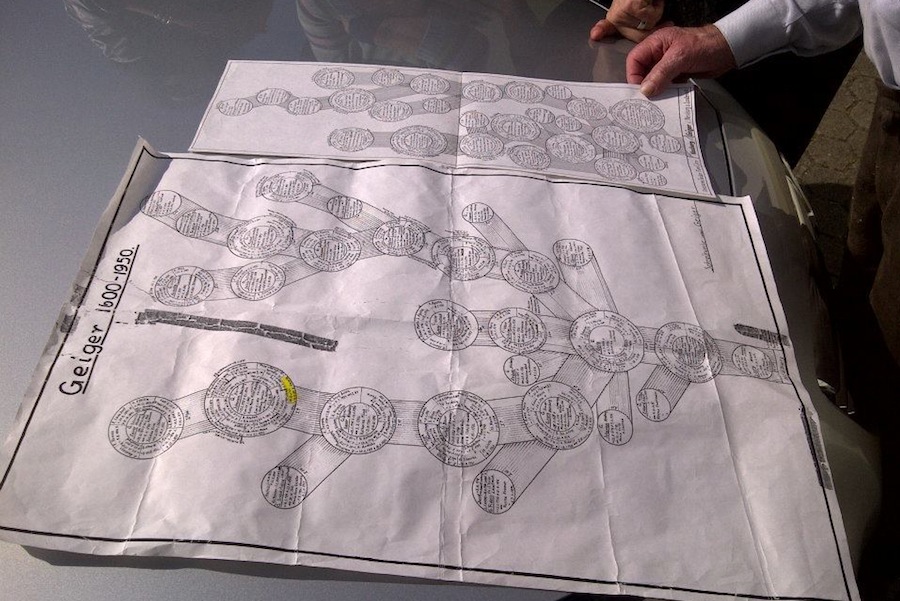 The two women walked into the back yard and we followed. I was shocked to see a man in his 80s with brilliant white hair peeking out from under his green cap, decked in traditional German garb (not the full lederhosen, but darn close), sawing wood. He looked like a character in a German fairy tale. I'm sure he was wondering, "Who are these people on my lawn?"

My father took out the family tree and showed it to him. The man looked at it, barely reacted, and walked into the house.

In the meantime, another man in his early 40s emerged from the house next door. He spoke a little English, and I explained who we were. He pointed to the woman, the house, and himself, saying in broken English, "Geiger, Geiger, Geiger! That is my mother and that is my father!" While we were trying to process what was happening, the older man came back outside with a piece of paper. He unfolded it and placed on the hood of the car. He had the same family tree. We placed ours next to his and saw that one branch matched his almost exactly. 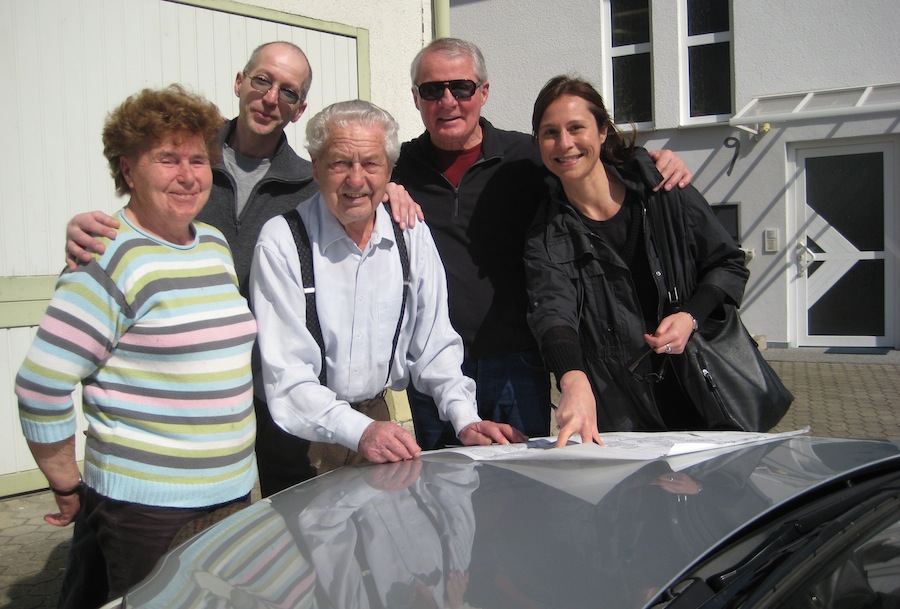 It was magical and insane, how this all came together in 40 minutes. I guess when I said "what are you going to do, go knock on doors in the middle of nowhere Germany?" the answer was "yes!" There we were, so far away from home, in a foreign land, in a foreign village, knowing not a soul or the language, standing with our new cousins.

We did not stay long because we didn't want to impose or wear out our welcome, but in a few moments we connected with a distant family whose blood we share. It was incredible.

We said our goodbyes, exchanged emails, and went on our way. I felt like a five-year-old in the back seat. "OMG, can you believe it, we just met our relatives. DAD, you've been talking about this forever, and you did it." He was speechless; Mom was too. 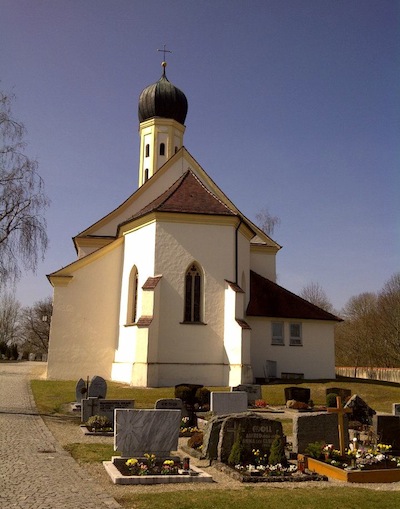 After about an hour in the car, my mother said, "Jim, you never went into that church!" I think he and I had the same thought: What difference did it make? We had met our relatives. Did we really need to turn around and go all the way back? Still, we had come all this way with the plan of starting at the church, and, well, we just had to. We made a U-turn and headed back along the vast, beautiful countryside.

Back at the church, there was still no one in sight. But it was just beautiful, charming, quaint — we were so far away from anything familiar. Time stood still and we took it all in. We headed back outside and I strolled to the other side of the church, making sure to see everything this time.

After a few minutes of silence, I heard my father say "Lisa, did you put this here?" There, in the middle of the cemetery, between two tombstones, was his briefcase. "Um, not recently," I said, though what I meant was "holy shit." One of us must have dropped the briefcase earlier. My father had taken it out of the car because the family tree was in it. He must have put it down in all the excitement.

That briefcase held my parents' house keys and, more importantly, their passports. We returned to Ulm even more speechless than before, found a beautiful restaurant on the Danube River, and relaxed with a few beers. I'm not sure how that woman showed up on the morning we were there or how that same woman knew our relatives in Lauterach or how those relatives happened to be home or how they had the same family tree. It was a lot to absorb. The stars aligned, something bigger than us, the power of intent — who knows. But we will never forget that afternoon.

The Mother of All India Trips
Mom and Me: Two Pilgrims Hiking in Spain
Tacos and Tequila with Grandma