When a parasite cripples your travel partner, what's your game plan? Abigail Radnor didn't let bathroom breaks keep her and her — ahem — digestively compromised boyfriend from the sands of Ilha Grande, Brazil, on a once-in-a-lifetime trip through South America.

ILHA GRANDE, Brazil – Nothing's worse than traveling sick. As a Brit on a ladies trip to Los Angeles and Las Vegas, I remember the unbridled self-pity I felt when a bug forced me to spend our last day in L.A. with my head in the toilet while the rest of the girls lunched at The Ivy. And the horror that ensued after landing in Vegas. (You know you have a good friend when she snatches away a full sick bag and hands you a fresh one without even flinching.)

Being ill is never enjoyable. It's doubly galling when it occurs on a far-flung, highly anticipated, and really expensive trip. And it's even more frustrating when it happens to your partner. Of course seeing someone you love suffer is always upsetting, but there's another element to it when you're on, say, a holiday of a lifetime in South America. On a remote island off the coast of Brazil. Which happens to be the most beautiful place you've ever seen. 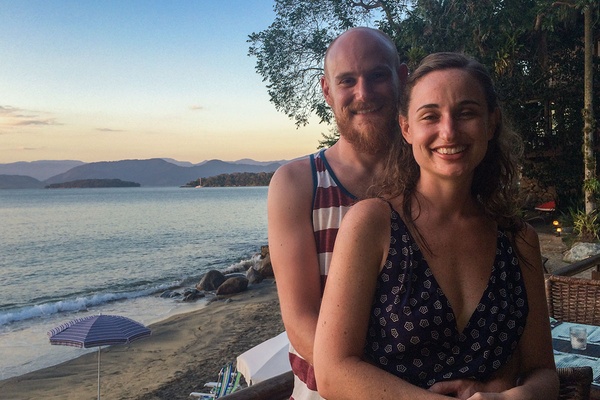 This isn't a theoretical example. This was the reality of my trip last winter. My boyfriend Jamie was unfortunately struck by a parasite in Buenos Aires before we took off to Brazil. It was most likely giardia, apparently such a common ailment for European and North American travelers that the doctors and pharmacists we spoke to gave us the same knowingly resigned smile every time we described his symptoms. I'll spare you the details, but let's just say Jamie and his gut did not see eye to eye for the remainder of our holiday.

Despite Jamie's condition, we flew to Brazil. A nervy car ride took us from the airport in Rio to Ilha Grande, a car-less 75 square-mile island that was once a leper colony and a prison and is now a tourist attraction so breathtaking it feels unreal.

I've never taken so many pictures out the back of a taxi as I did traveling down the coastal road that leads to Angra dos Reis, the port where our boat departed to the island. The convergence of brilliant blue sky, luscious forested mountains, and deep blue sea got me all giddy. And that was nothing compared to the island itself. 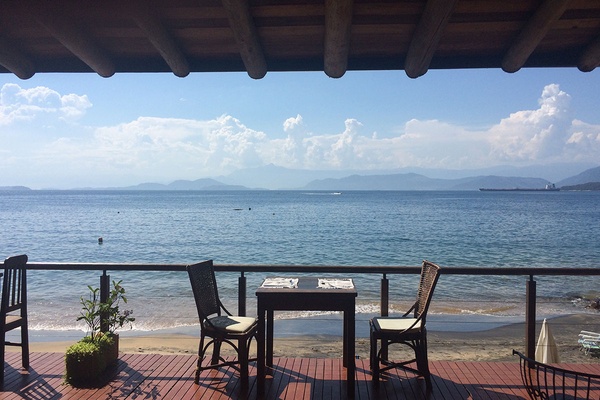 A look out to the lagoon.

Abrão is the central town in Ilha Grande. It feels like a four-road confluence of hostels, restaurants, and gift shops, which is perfect for backpackers. But I recommend finding a tiny pousada (a Brazilian bed and breakfast) elsewhere on the island to revel in the remoteness of it all. We stayed at Estrela da Ilha Grande, a no-frills, super relaxed lodge with nine suites that all have their own terrace facing the Blue Lagoon and a handy hammock from which to soak it all in.

You can do very little in Ilha Grande. Or you can do a lot. Fellow guests spoke of various hikes, and, while we did opt for an easy trail (that truthfully was not that easy), we didn't do much else. We took it easy, which was about all Jamie could do. But there was one thing we needed to do — visit Lopes Mendes beach, THE beach of Ilha Grande.

From our pousada, Lopes Mendes was a 30-minute boat ride (shared with another four guests) follow by a 15-minute hike (no boats are allowed on the beach itself). The morning of our Lopes Mendes moment, Jamie felt horrendous. He couldn't eat and was, shall we say, digestively fearful. He couldn't face any sort of trip away from the bedroom.

But this was our last chance to visit Lopes Mendes, as we were leaving the following day. He suggested I go alone, but I hated the idea of him missing out on what felt like the whole reason for visiting Ilha Grande. We had missed out on seeing Florianopolis and would later spend 90 percent of our time in Rio in our hotel room. And after hearing so much about this beach, I was determined we were going to see it. So I went into cheerleading nurse mode. After a little encouragement and a lot of reassurance, we made it on the boat. Jamie, although tight-lipped and nervous throughout, survived.

Now this may not necessarily win me Girlfriend of the Year, but, let me tell you, Lopes Mendes was worth it. A vast expanse of postcard-esque tropical beach with white sand so soft it squeaks underfoot — a detail so delightful it made me squeak, too.

We got there relatively early, before the surfers and choppier waves arrived around midday, which I recommend. We spent most of our time nestled under the shade of almond trees and took a couple of refreshing dips in the crystal blue sea. During that time, we managed to reclaim what we had set out to achieve — a holiday of a lifetime. 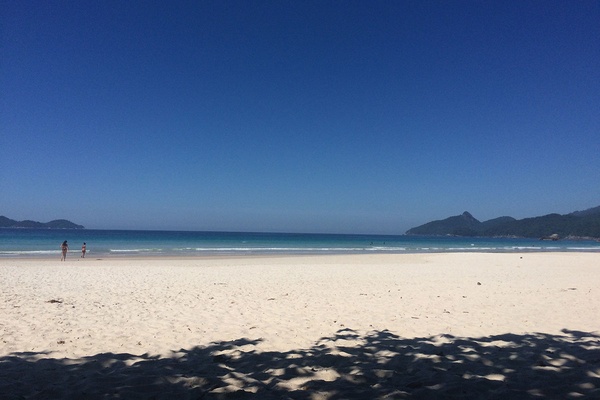 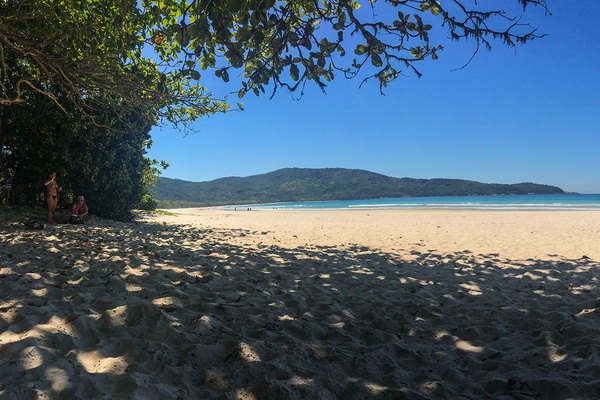 Lounging under the almond trees.