All right, lovers, listen up. Grab a lock, a marker, and a spot on the fence. You're ready to take part in the adorably cheesy tradition of leaving a lock in memory of love. We compiled a list of ten happy places around the world where lovers go to do it.

Talk to a smitten couple heading to Paris, and their itinerary might include a stop at Pont des Arts to hang a metal lock on the bridge as a sign of their everlasting love. Thousands of people have already done so, so many that earlier this year the fence collapsed under the weight of all those love locks. (Ah, Paris. The way you suffer for amour.) The city of lights and love isn't the only place where incurable romantics hang their signs. The tradition has spread all over the world, to the most unexpected places. 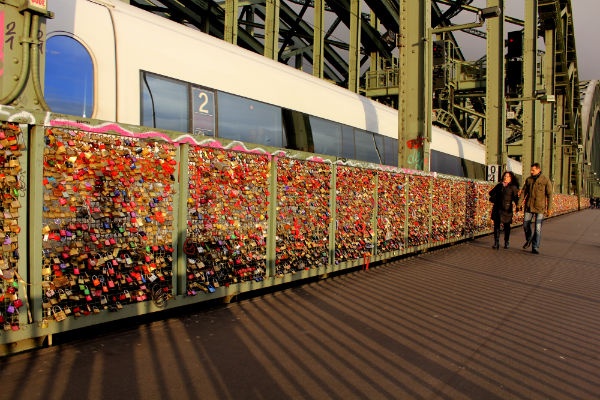 Warm up the colder months. Photo by Rachel Titiriga / Flickr.

Cologne's Hohenzollernbrücke Bridge is covered in two tons of colorful locks. There are so many that the company that operates the bridge threatened to remove them, but public opposition to the idea prevailed in the end. 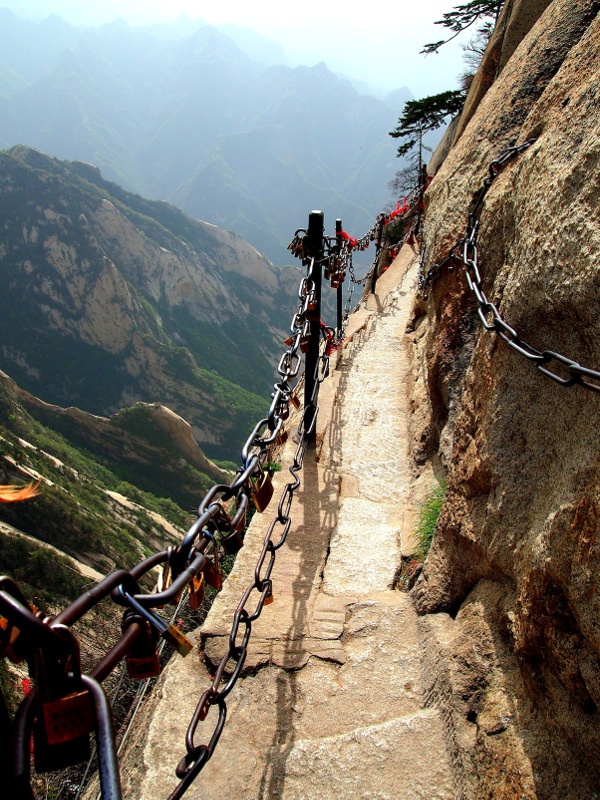 Consider Mount Huashan, one of China's five sacred mountains, a metaphor. Climbing up the steep mountain isn't easy, but the chain fences along the trails are completely festooned with golden locks and red ribbons nonetheless. 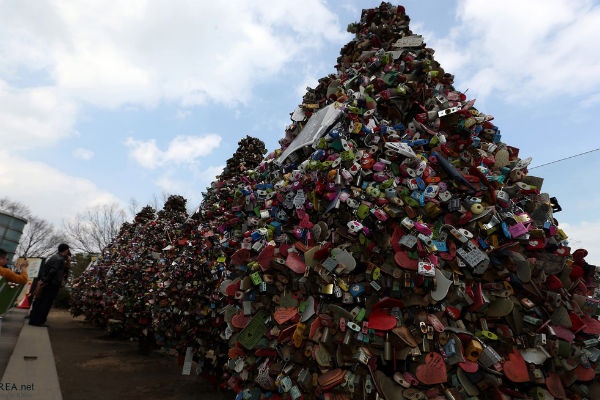 Love locks are everywhere on the roof terrace of the North Seoul Tower at Seoul's Mount Namsam, the highest point in the city. Thousands of couples have come here to hang their locks and take in sweeping panoramas of the city below. There's even a "Postbox of Love" to collect the keys so that they don't get thrown away. 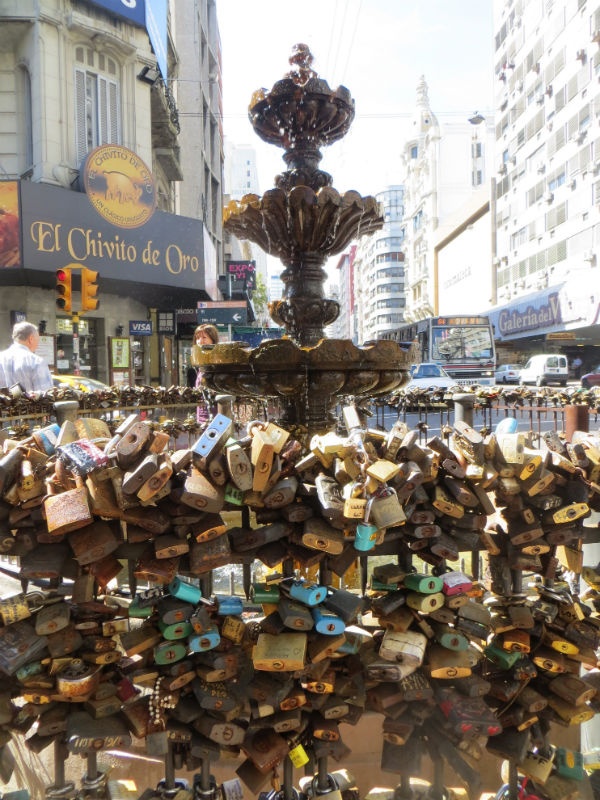 La Fuente de los Candados, or the Fountain of Love Locks, is located on one of Montevideo's busiest streets. The plaque on the fountain reads, "The legend of this young fountain tells us that if a lock with the initials of two people in love is placed in it, they will return together to the fountain and their love will be forever locked." 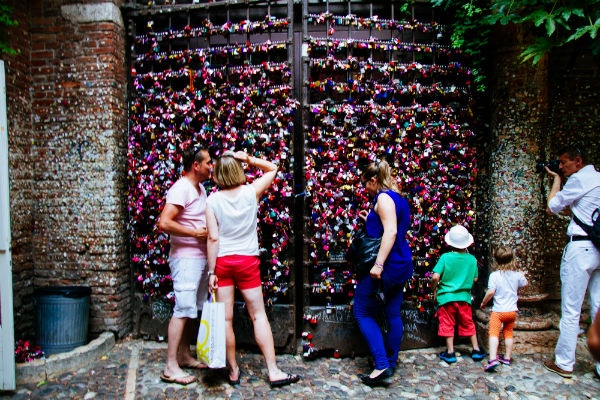 There's hardly a more fitting place for love locks than the gate outside the balcony where Romeo wooed Juliet in Verona, Italy. The lock-covered gate is curiously framed by walls adorned with gum. 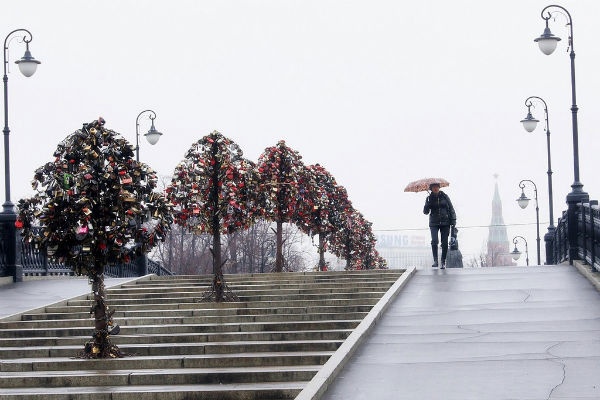 What started as one metal tree built for people to hang their locks became a whole row spanning the Luzhkov Bridge in Moscow. 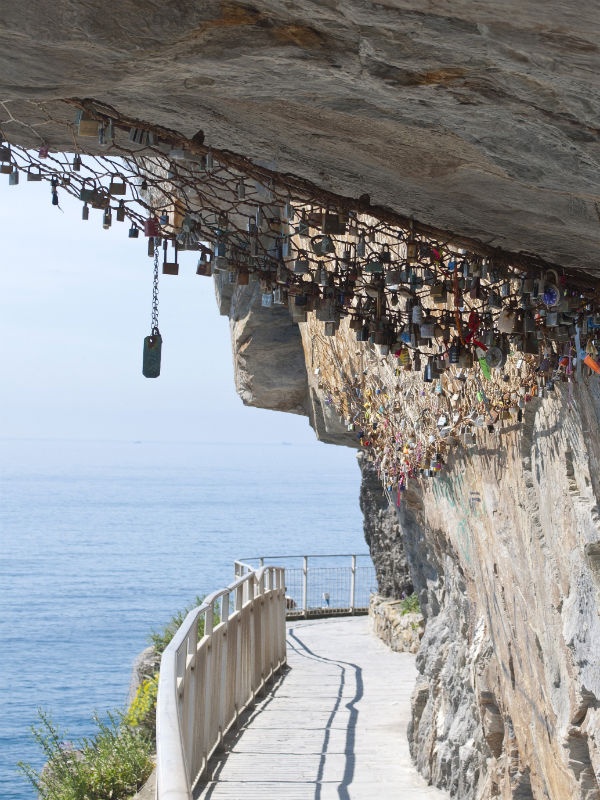 Hmm, how did those locks get up there? Photo by Nathan Guy / Flickr.

Locks dangle from the wire mesh covering the cliffs along Via dell'Amore, or Lover's Lane, in Cinque Terre. The path connects the two fishing villages of Riomaggiore and Manarola, and was once a meeting spot for lovers from those two towns. 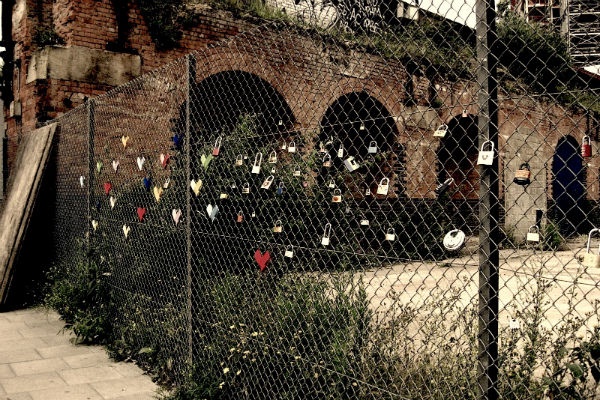 The phenomenon started showing up on the fence of an empty lot near Shoreditch station in East London a few years ago. 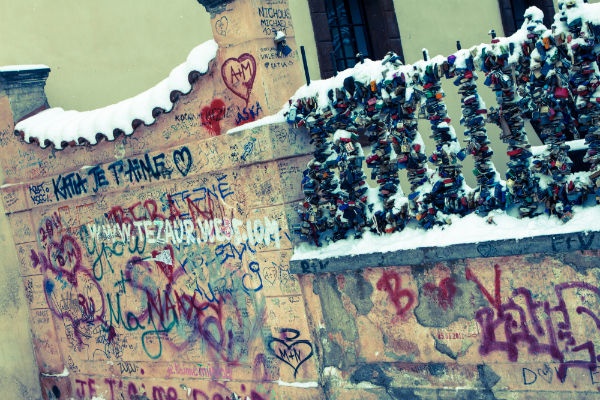 Evidence of affection all over the bridge. Photo by Jirka Matousek / Flickr.

This small pedestrian bridge, tucked away feet from the Charles Bridge in the Malá Strana district of Prague, doesn't even have an official name, but the locks all over its railings have earned it the nickname "Love Lock Bridge." 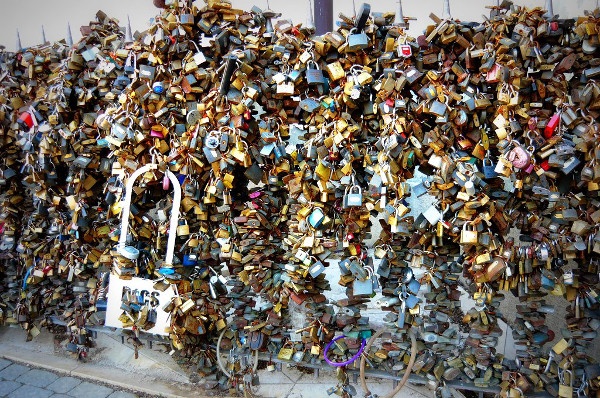 The tradition of love locks in Europe is said to have started on this fence in Pécs in the 1980s. Once the fence got full, love locks quickly spread to other spots in the city. In an effort to fight the trend, officials eventually resorted to building a new fence for love locks near the original.

The World's Most Romantic Hotels 2014
A Naughty Weekend in Essaouira
Parisian Book Tour: "I Am Having So Much Fun Here Without You"