During a romantic interlude in Italy with his fiancée, travel journalist Darrell Hartman sipped espresso, cheered for jousters, and fell for the rustic elegance of an albergo diffuso, an innovative hospitality concept wherein buildings are revived with a sense of history.

LE MARCHE, Italy – One of the great pleasures of visiting Europe, that old continent, is the parallel journey that you almost inevitably end up taking into the past. And so it was during the week my fiancée and I had in Italy this summer. Most of that time we spent in the east-central province of Le Marche. We stayed with friends in the hills above the underrated city of Ascoli Piceno, descending the windy roads in our rented Fiat to visit the Saturday farmer’s market or stroll the cobblestoned alleyways in search of curious architectural details and gelato.

For a respite we’d park ourselves in the town’s stunning 16th-century piazza — one of the most beautiful in Italy, we were assured more than once — where the 110-year-old Caffé Meletti, its shelves lined with handsome bottles of the house’s brand of anisette, occupies a prime corner position. The décor is elegant Art Nouveau, the metal outdoor tables a delightfully vintage shade of mint green. To sit and sip espresso here, in the shadow of the grand old church and clock tower, is to get a taste, however faint, of a mish-mash of overlapping historic eras. 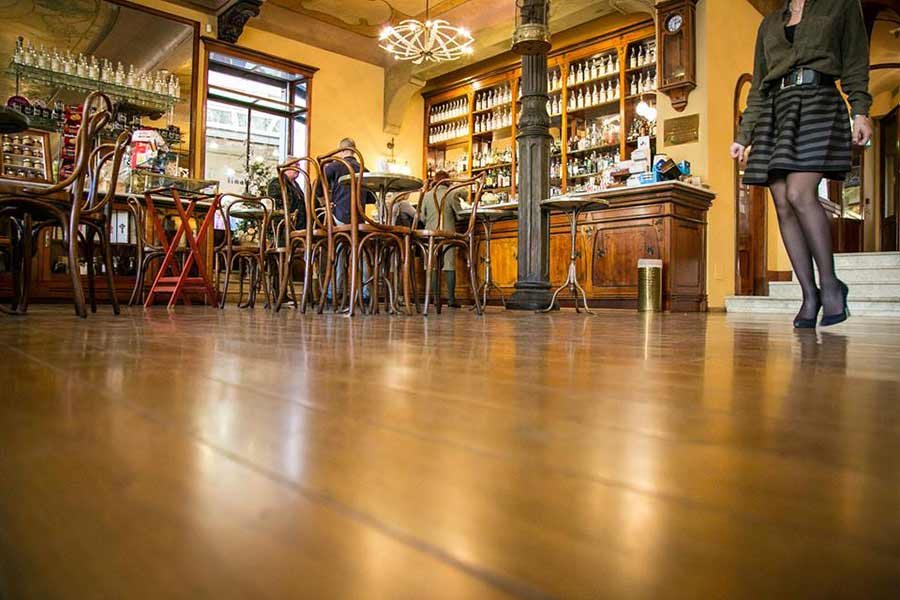 Inside a 110-year-old cafe in Le Marche. Photo courtesy of Caffé Meletti.

As it happened, we were in town during Quintana, a day of medieval pageantry that takes over Ascoli every summer. Residents of all ages go parading through the streets in velvet gowns, leather jerkins, and brightly colored hose. The whole thing is a mesmerizing wave of priests and princesses, children in elfin boots, and somber-looking musicians and men-at-arms. The march is organized by district, with each turned out in team colors hoisting a giant flag embroidered with a distinctive crest. Each quarter trots out a prize horseman, too; the Quintana’s main event is a jousting tournament. (That the competitors ride at full speed into bulls-eye targets, rather than other knights, only makes it a bit less exciting.)

The obvious point of reference here (for an American, at least) is a Renaissance fair — a cheap comparison, given how many of the surroundings here are truly of the Renaissance, how many of the ancestral links unbroken. The jousting was legit; there was real pride at stake. At no point did the Quintana seem like an educational exercise, or a drama club putting on a show. And not once did I hear a word of English spoken. 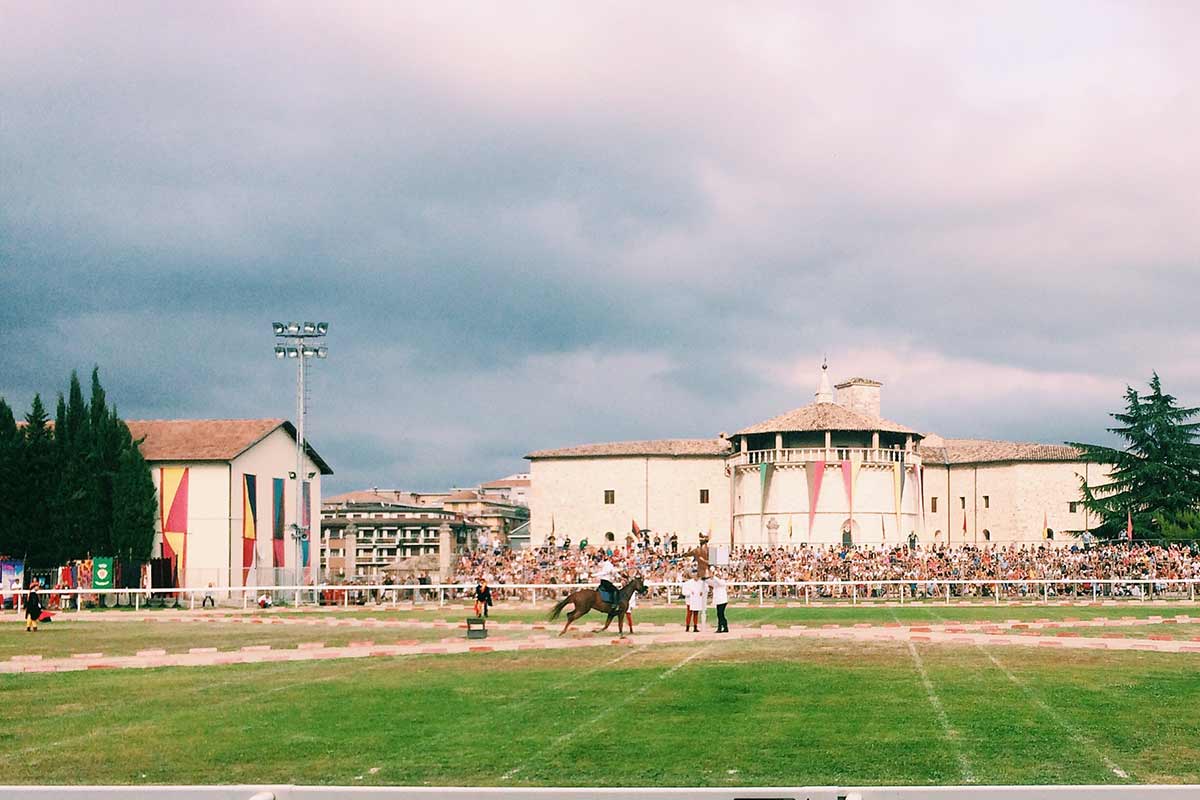 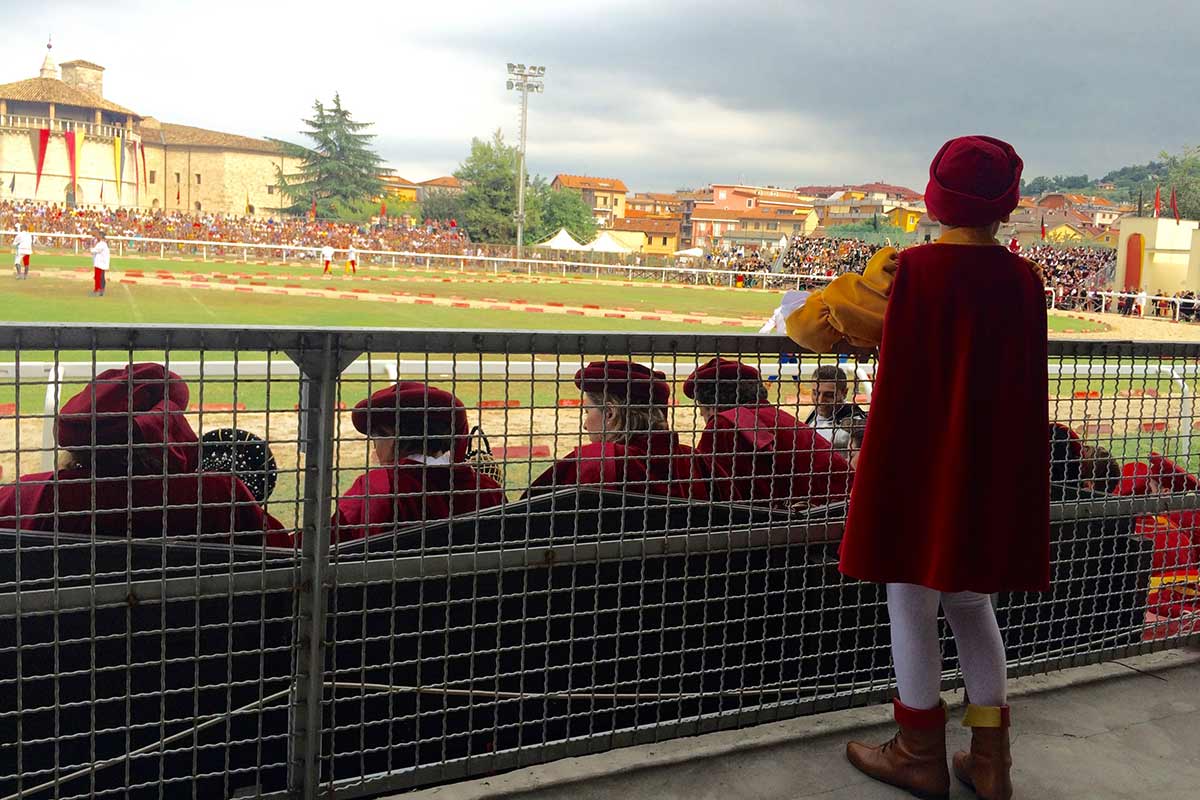 Spectating the festivities in Quintana. Photos by Dana Drori.

As memorable as the spectacle of Quintana was, I don’t think it burned itself into me as much as Abruzzo, just south of Le Marche, did when we visited a few days later. Abruzzo is a mountain region, not as green or prosperous or high-cultured as the rural zones that populate many an Italy travel fantasy. And the emptied-out medieval village of Santo Stefano di Sassanio, where we spent an unforgettable night, has been adapted for tourism in a much subtler way than the hill towns of Umbria and Tuscany.

The journalist exploring the streets of Santo Stefano di Sassanio; view from a window. Photos courtesy of Darrell Hartman.

Our brief time there was truly a window into a simpler, older way of living — thanks in large part to Sextantio Albergo Diffuso, one of the most transporting hotels I’ve ever stayed in. Its 29 rooms are scattered throughout seven stone houses; the atmosphere is an ancient one, almost monastic in its austerity. When I think of Italy’s architectural heritage I almost always think of soaring opulence — this is the home of the Vatican, after all! But the archaic, humble dwellings at the Sextantio property, with their perfect intermingling of restored and recreated elements, overwhelm the senses in other, more surprising ways. There is the rustic simplicity of the wooden tables, chests, and window casings, which could just as easily be 50 or 500 years old. Time has imprinted all kinds of character onto the unadorned plaster walls, and faded the beautiful ceilings (painted with birds and swirling plants and flowers) above our bed. On that bed was laid a hand-woven wool blanket, a nod to the wool industry on which Santo Stefano depended in previous centuries. (Sextantio’s gift shop sells other woolens, many of which are made on a loom by one of the few remaining local artisans.)

The sweet, vaguely sooty smell of the rooms I assumed to be coming from both the ancient fireplaces and the scented candles that had been placed strategically throughout the space. That I couldn’t be quite sure of the source only added to the magic. It’s no surprise that the restoration of these houses (which have been open to guests ten years now, and were so expertly reconstructed that they survived a devastating 2009 earthquake entirely intact) was done in consultation with a regional museum, and at great expense.

Rooms, at once rustic and chic. Photos courtesy of Sextantio Albergo Diffuso.

More amazing is that they can be rented for less than 150 euros a night. Until I saw it for myself, I would have thought such a place only existed in dreams. My fiancée and I had dinner at Sextantio Albergo Diffuso’s partner restaurant, a five-minute walk down the street. The décor is of a piece with the hotel’s, and the menu does locavorism one better, restricted as it is to items that would have traditionally been available in the region. We shared a sinfully good gnocchi larded with salty pork cheek, and an egg-in-tomato-sauce dish colorfully known as uovo purgatorio. Most of the light bouncing off the walls came from discreet electric bulbs, but the evening will exist in my memory as a candlelit one.

Back at the room, we poured out nightcaps from a tiny potion bottle that had been left in the room. It contained humble vino cotto, “cooked’ wine,” the Italian peasant’s answer to tawny port. It was a deeply satisfying end to the evening: rich and flavorful and rudimentary, without any fancy airs.

Romancing the Stone: Opea, Orecchiette, and Lovers in a Cave
A Heavenly Meal in the Marche
The World's Most Romantic Hotels: Italy