Some trips leave memories that never fade — no matter how long it's been since you went and how many places you've seen since. Joan Larsen remembers the unforgettable Bora Bora.

BORA BORA – It began with a personal letter from the long-ago best-selling author James Michener a letter I still hold dear — that said I must go to Bora Bora. "The most beautiful island in the world," he wrote, "and one that he wished he could go along to see once again." When I returned from French Polynesia, I remember writing him at his Maryland home, saying that God must have personally placed this islands in the ocean after He finished the rest of the world — carefully, like a floating candle, after having touched up the rain forest and mountains with a gentle brush. This place stands alone — absolutely alone — in its spectacular beauty.

Welcome to paradise. All photos by Joan Larsen.

Polynesia once seen is never forgotten — especially the islands of Moorea and Bora Bora. Ten years ago, we stepped off a small plane onto a runway that seemed from the air the size of a beach towel. We initially gasped at the tropical heat, but soon that was forgotten as the sight of the green-mantled hills and threads of waterfalls falling from the mountain peaks made us feel that we had stepped into a corner of heaven on this earth. 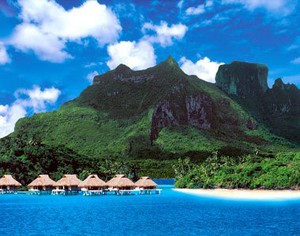 The "hotels" aren't Hiltons. No way. Now barefoot, we were escorted to a grass hut on the beach. Lest that conjure other images, this was an ultimate experience — our own grass hut, with amenities to dream about, at the end of our own private pier over clear turquoise waters. At the time, Hotel Bora Bora was the hotel on the island. Classy, understated perfection. Romantic? I am still floating on the memories.

There's more. A portion of the floor of our grass hut suspended over water was made of glass. The glass trap door was puzzling ­— until we discovered that the entire area under the floor could be illuminated at night. The French bread we smuggled from our meals was a gourmet treats that attracted a rainbow of tropical fish that turned the sea beneath the hut into our own private aquarium.   You know how you always ask at hotels for "a room with a view"? This one has yet to be matched. It can't be. 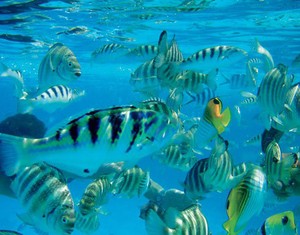 A ladder outside descended into the lagoon. What we now considered our own tropical fish delicately nibbled on our legs — or so it felt — as we descended into the clear warm waters. Floating and looking up at the mountains above? We couldn't get enough. Snorkeling? Of course. Easy to master, quickly addicting. With no one in sight, you could swim au naturel.

I remember my mother — a woman so like me — quoting Mae West that "too much of a good thing can be wonderful." Of those times — not that long ago — when I lived for that overall sexy tan, the sun and the sand, the underwater close-up encounters with the natural world living in the deep, my memories are the forever ones. 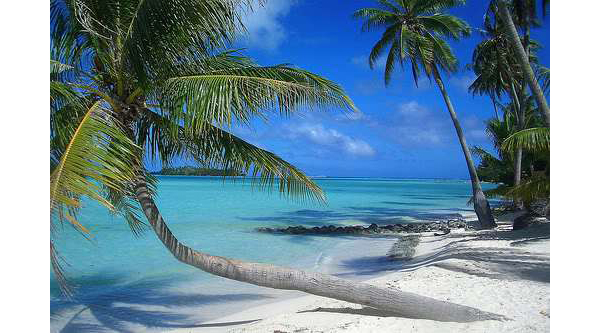 Today, seemingly more so than ever, we need getaways both grand or small. Let-the-world-go-away is what I call those escapes. We all have our favorite places when we need a little change of scene. The Caribbean and Hawaii top the list when the agenda calls for warm, but when you want enjoy the whole wonderful world in all its natural glory, Polynesia is sure to be waiting, the frosting on any cake.

Hotel Bora Bora is now closed. When it opened in 1961, it was the first hotel to build over-water bungalows. Travelers who visit now will find a dilapidated building that almost looks haunted, because no one has touched it since it closed. Aman Resorts is renovating the property.