The Tuscan fantasy is alive and thriving at Monteverdi — with food, art, events, music, design, and scenery to inspire your Italian countryside dreams.

TUSCANY – When I first heard about Monteverdi Tuscany, I didn't want to like it. A charming medieval borgo on a beautiful Tuscan hilltop "Where Art, Culture, and Luxury Come to Stay." Ma che dici?! What are you talking about?

The know-it-all in me was instantly skeptical. Was Monteverdi just another abandoned town tricked out into a cleverly planned Italian tourist fantasy simulacrum made by Americans for Americans? The last decade has seen several of these corporate village takeovers in Tuscany. And, well, they usually feel a little Disney. My reaction was typical for any good USA-raised Italian whose childhood was both entirely American and entirely Italian: I had ust enough positivity to be intrigued by the idea and just enough cynicism to red-flag it. I know what real Italian is, and the Nancy Drew accepted an invitation so I could investigate firsthand.

It took me one hour by train from Rome to Chiusi-Chianciano Terme and a half hour by car through windy country roads to get to Val d'Orcia, an UNESCO World Heritage site and one of the most beautiful valleys in Italy, where the green hills roll on for miles and miles. At the top of one such hill is Castiglioncello di Trinoro, a 12th-century hamlet with a single stone road, some ten buildings, and a church. Halfway through town, the road widens onto an open piazza whose panoramic view of the valley makes it very easy to understand why Cincinnati-based lawyer and cultural arts patron Michael L. Cioffi fell in love with what he saw. 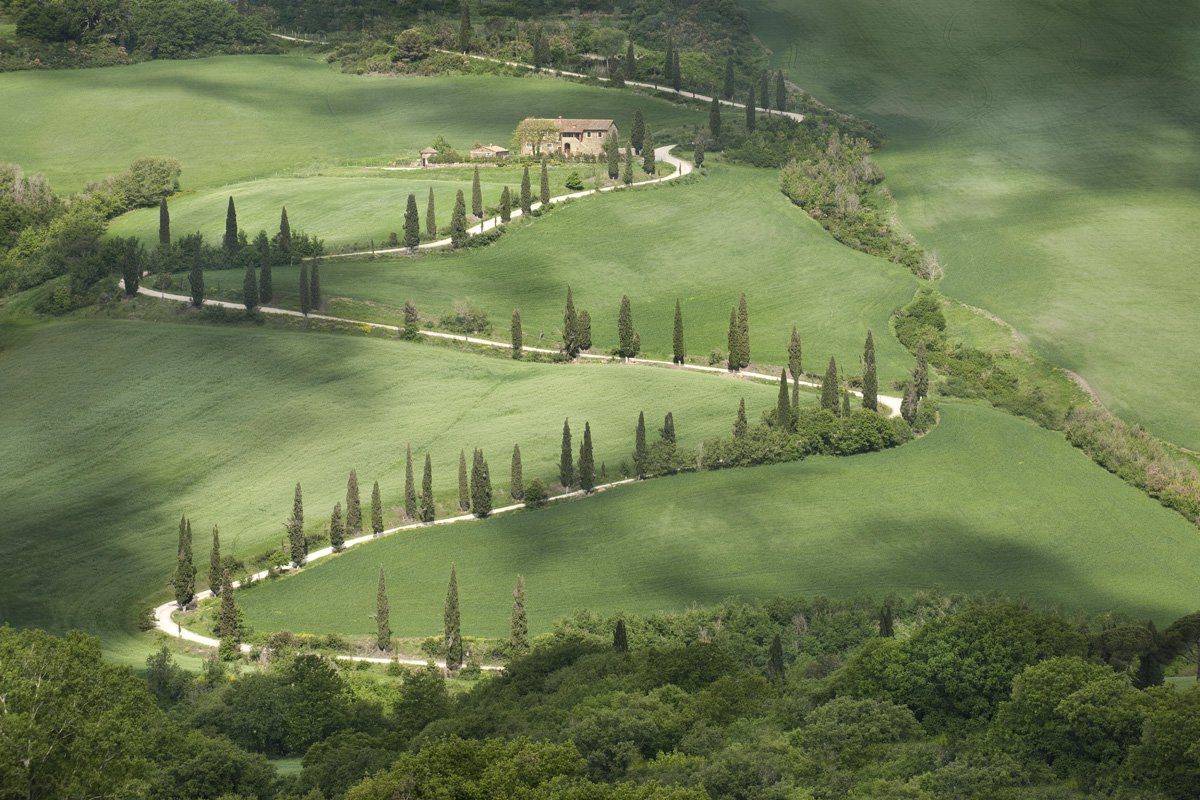 In 2003, Cioffi visited Val d'Orcia and bought a country home. He hired Rome-based interior designer Ilaria Miani to do the restoration. A logical choice because, over the past three decades, Miani has made her name synonymous with Tuscan country chic, notably through her Via del Pellegrino project, wherein she and her husband Giorgio purchase abandoned farmhouses and transform them into sumptuous villas.

If I could, I would take over the entire retreat and invite people I love just to celebrate me for a week. I'd pick everything — from the menu to the music — and we'd never even want to leave. It is that kind of place.

But Miani didn't just design Cioffi's farmhouse: She ended up creating an entire world. While visiting his Val d'Orcia home, Cioffi became intrigued by Castiglioncello di Trinoro, which overlooks the valley Cioffi calls home. He found a hamlet of weather-worn history with just ten inhabitants and a patchwork of buildings longing for restoration.

Cioffi couldn't resist. He began acquiring Castiglioncello properties and brought on Miani, whom he calls "the Beatrice to my Dante." Their creative partnership spawned an incredible revitalization project. What began as a passionate whim quickly became an intense and full immersion restoration: returning buildings' original architectural designs, hiring local stonemasons to lay stone and brick using traditional techniques, and repurposing stone and wood to create design elements evocative of the storied beauty of the hamlet and the surrounding Val d'Orcia. Miani transformed the interiors into contemporary environments with beautiful palettes, original artwork, and custom furniture, while keeping true to the building's medieval origins.

The hamlet became Monteverdi, a luxury retreat and hotel named for 16th-century composer and humanist pioneer Claudio Monteverdi, whose ideas about art and beauty inspired Cioffi. Design, gastronomy, art, and music are the cornerstones of everyday life at Monteverdi. The townhouses leading into the hamlet are Monteverdi's main location — home to the reception area, guest rooms, a beautiful and cozy lounge, a yoga studio, and a full-service spa with an underground pool. My room was in the main building, a lovely space facing the main road. Every morning I woke up and watched the town wake up.

In total there are 18 rooms and 3 suites, with several rooms scattered in buildings whose ground-floor, corner properties are Monteverdi's culinary hangouts: an enoteca featuring the territory's best wines (many winemakers are Cioffi's friends) and a restaurant curated from Monteverdi's farm-to-table Culinary Academy (which has its own free-standing building with an epic kitchen for classes and dining). On the edge of town are individual farmhouses that have been transformed into three villa suites of two to six bedrooms.

Monteverdi is a world. One where you can recharge with your best friends and make new ones (guests are primarily American but very international), sip Brunello, catch up on contemporary jazz, or just hide out for a while, like director Wes Anderson, who penned a screenplay at Monteverdi in a few weeks one autumn. If I could, I would take over the entire retreat for my family (parents, sisters, cousins) and close friends just to celebrate me for a week. I'd pick everything — from the menu to the music — and we'd never even want to leave. It is that kind of place.

Let's get back to that panoramic piazza at the heart of the town. The Italian piazza, by definition, is an open forum and gathering place. At times, Monteverdi's piazza is a relaxed hangout, and it's lovely as that. But at least a few times a week, this square overflows with guests visiting for the Monteverdi Music and Arts Program, Cioffi's pet project, a busy calendar of cultural events that runs from May through December (and the reason they have invited Fathom to visit).

And by "guests," I don't just mean Monteverdi's hotel guests but also locals from neighboring towns, who come to hear an international who's-who of award-winning musicians and singers perform in Monteverdi's Chiesa di Sant'Andrea, the restored 700-year-old Romanesque gem of a church.

The performances, which are free of charge, and the other cultural offerings at Monteverdi — conferences, music and film festivals, and art exhibitions — are slowly and quietly reinvigorating Castiglioncello di Trinoro, bringing new personality and revitalizing a town whose future had once seemed shaky.

Timelessness is what Cioffi wants for Monteverdi. "It's a restoration project that is really not about just the past but about creating a sustainable future. And what's going to happen in the future."

Monteverdi is beautiful, inside and out. Miani's design and palette are so meditative and mesmerizing that I felt like I was in a Morandi painting. The landscape itself is a muse, inspiration waiting for the taking. The staff is impeccable, present, and friendly. The yoga session was therapeutic; the thermal bath in the spa was exactly what I needed. There was absolutely nowhere else I wanted to be for the four days I was there, and when I left, I was recharged and rebooted, with absolutely no desire to return home to Rome. Monteverdi is an oasis in every way, and, more importantly, not at all the Disneyfied Tuscany snowglobe or time capsule, with perfectly pedicured yesteryear stereotypes that I had feared. If this is the future of Italian tourism, it looks bright.

Location
You're in the very best part of part of Tuscany: the Val d'Orcia, just south of Montalcino, around the corner from Pienza and a drive to Sienna. It's the oasis under the Tuscan sun.

The Vibe
Italian country chic, from the moment you drive through nearby town Sarteano. You'll want to pack your Saddler's Union duffle with your favorite Bruno Cuccinelli sweaters and Tod's car shoes because it does feel like an ad for The Perfect Tuscan Getaway.

This Place Is Perfect For
Solo travelers who need a weekend retreat. Multi-generational families who want to get together, as well as intimate wedding parties Writers and artists who need inspirations. And couples, whether long-term or brand new, who just want some time alone. I'd even be happy even breaking up here.

But Not So Perfect For
Families, not for any other reason except for that it is the perfect couple's getaway, and I want to keep it that way.

What's on Site
What's not? There are terraced gardens, an archaeological site, an outdoor pool, a full spa with thermal pool, a yoga studio, and gym with personal trainers upon request. There are several dining venues, including Oreade, the fine dining restaurant, The Enoteca, the more casual wine bar, the late night Library Bar, the Piano Lounge and Terrace, and the Culinary Academy — all under the helm of executive chef Giancarla Bodoni. Monteverdi's overall goal is to be a culture hub. Its deconsecrated church is a performing arts studio, and in the summer months its main piazza hosts events and concerts. A former storage area is now an art gallery with rotating exhibitions.

Rooms
Of 29 total rooms and suites, 18 are guest rooms and three are suites with two to six bedrooms. Designer Ilaria Miani meticulously designed each room with personality, recalling the original farmhouse vibe (wood-beamed ceilings, rustic detailing, rescued material for doors, cabinets, and other elements) while grounding Monteverdi in the present with custom-made furniture and contemporary art prints. Miani is a master of color and style. Her palette choices range from vibrant (rich reds, blues, and greens) to sublimely subtle neutrals and earth tones. She worked with local artisan to create unique bed frames and furniture that transcend periods, creating a very contemporary feel. The bathrooms are lovely oases with rainfall showers and glass doors, most with sweeping views of the Val d'Orcia.

Drawbacks
Can't think of a single one.

Standout Detail
Ilaria Miani's deliberate choice of colors and her precise placement of furniture. The overall effect is very calming and meditative, like a Morandi painting.

Surroundings
Once upon a time, in a land far away, there was a town on a hill…

Everywhere you look, the Val d'Orcia is the start of a fairytale. Castles on the hill, vineyards, farms, and forest — every curve on the drive around the valley is breathtaking and every panorama is picture-perfect. The valley is lush with so much greenery, you can finally distinguish every shade — vibrant chartreuse, rich phtalos and emeralds, and dark, mysterious pines.

What to Do Nearby
If you really feel like you need to leave this incredible enclave, the Val d'Orcia is an incredible area to explore, by mouth, foot, bike, car, and even steam train. Explore castles and towns like Pienza, Siena, and Montepulciano, or just meditate while trekking the Via Francigena, the medieval pilgrim route.

Good to Know
Tuscany is an incredible wine and food region, but what makes Monteverdi extra special is its proximity to Montalcino, a terroir of small and particular producers of Brunello di Montalcino. Cioffi and his team know many of the winemakers personally, so do not be shy about asking for an introductions.

How to Get There
Monteverdi is almost halfway between Florence and Rome. Rome's Leonardo da Vinci International Airport is the major hub for direct flights from the US and the drive to Castiglioncello del Trinorois just a little over two hours. From Florence's Aeroporto di Firenze-Peretola, the drive due south is just under two hours. For those uninterested in a drive, you can take a train from either city to the Chiusi-Chianciano Terme train station, but will need to organize a transfer to Monteverdi.

Getting Around
You'll want to bring your favorite walking shoes and/or hiking boots. You're in the Val d'Orcia and you'll want to walk as much as you can. Monteverdi is extremely helpful organizing day trips with hired cars, but you may want to have your own car on hand to enjoy the countryside.