We're in search for the perfect museum experience. An interesting collection, a stress-free atmosphere, and a twist to keep the kids excited. Is that too much to ask? We thought so, until Fathom friend Sarah Picchi proved us wrong from the back of a Belle Epoque-era merry-go-round. And where did she buy a ticket to this awesome, vintage fun fair ride? At the museum of course.

PARIS – Museum fatigue. We're all familiar with it. A lethargy that's part sensory overload, part physical exhaustion, and part irritation. Even the most stalwart art lover wants a break from the pack after an hour battling the crowds at the Louvre. Let's skip that this time, shall we?

On a recent trip to Paris, my family and I discovered Musée des Arts Forains, an enchanting museum unlike any in the city. The museum's name roughly translates as "Museum of Fairground Arts" and was opened in 1996 by Jean Paul Favand. An actor and an antiques dealer, Favand spent 35 years amassing and restoring his collection of "fun fair" — attractions, objects, and rides dating from 1850 to 1950.

After three years in an old Citroën factory in the 15th arrondissement, the Musée des Arts Forains settled into its current location, an old wine storage facility in Pavillons de Bercy in Parc Bercy in the 12th arrondissement, not far from the Seine. 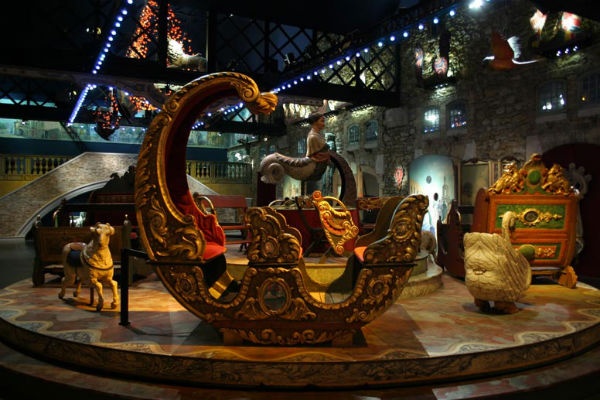 They don't make 'em like they used to. Rides from inside Les Salons Vénitiens.

The museum is an immersive experience divided into three main rooms, each with their own flavor and focus: La Fête Foraine, Le Théatre du Merveilleux, and Les Salons Vénitiens. La Fête Foraine features 19th-century games, including manège de vélocipèdes, a pedal-powered bicycle merry-go-round. (Read that twice if you have to.) Le Théatre du Merveilleux showcases the variety of entertainments available in Paris from 1800 to 1840, including a show that uses video and automatic mechanical musical instruments. Les Salons Vénitiens uses automata and music to create a Venetian wonderland, complete with a charming gondola carousel, le manège de gondoles des Salons Vénitiens. My 13-year-old daughter hopped in and took the swan for a spin. 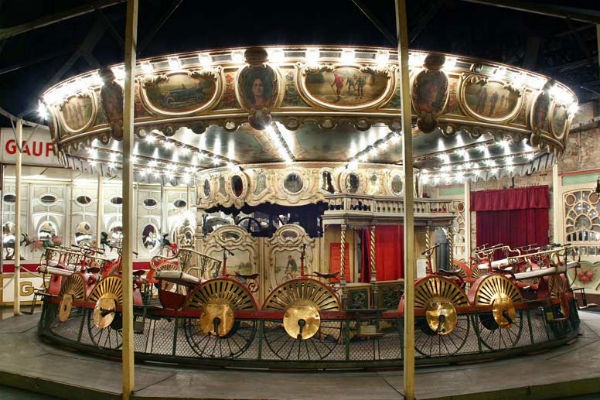 Pedal power — a force to be reckoned with.

Merry-go-rounds. More carousels. German swings. And fantastically, a game modeled after the Parisian Waiter's race. Leave it to the French to develop a race that tests how fast waiters can move (not run, waiters don't run) while holding a tray without spilling its contents. (This footage from a 1949 race is hilarious.)

The tour is interactive, and guests are allowed to ride the attractions and play vintage fun fair games. No pushy crowds. No stuffy atmosphere. Just a day at an old-world fair, park pass and informative commentary included. 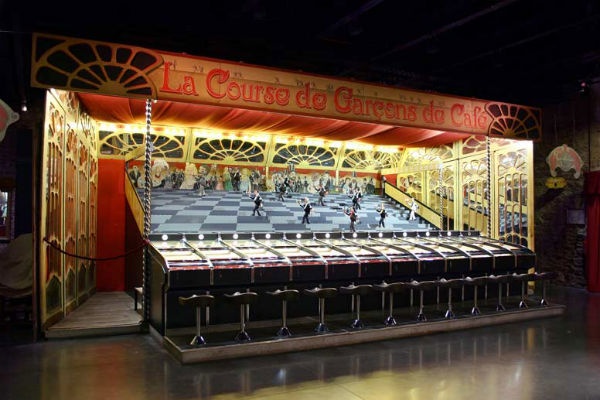 Racing French waiters. This can never get old.

By far, our favorite things were playing the Parisian Waiter's Race and riding the velocipede, the bicycle merry-go-round powered entirely by manual pedaling. The velocipede was built in 1890 and is only one of two that remain in the world. Our guide informed us that you had to be at least 12 years old to ride the bikes and that if your foot came off the pedals you should NOT attempt to put it back on.

That was before we got on. Once the ride was over, we understood these rules much more clearly. It's hard to imagine how fast and frightening a bike-powered merry-go-round can feel until you find yourself pedaling furiously, unable to stop. Those French.

ADVANCE TICKETS: Visiting the museum can be tricky. Private tours are available throughout the year, but not all tours can be booked online. The website has a calendar of available tours, but the best strategy is to call (+33-01-43-40-16-15) to inquire about additional tours not shown on the website. Tickets cost 16€ for adults and 8€ for children aged 4-11. Children under four can enter for free. In addition to the private tours, the museum is open to the general public on busy holiday weeks, like Easter and between Christmas and New Year's.

LANGUAGE: The day we went, everyone in our tour group was French except for our family and another couple. The tour was conducted in French, though our guide paused now and again to translate some information into English. Guides may not be proficient in your language, but that's okay. When it comes to old-school attractions, century-old games, and Belle Époque flair, who needs to understand every word?