I'm aware that I'm the only person in the world who feels this way, and as such could be accused of assuming some sort of coolly contrarian pose. I promise that's not true. If you know me (and it's my assumption that anyone reading what I've written must be doing me a personal favor), you know I expend most of my energy on being a very positive and upbeat person. If you know me better, you'll know that behind that façade lurks a weak, retiring, listless, curiosity-free person. That is, precisely the sort of person who might not enjoy traveling.

No, for real. Airports and also airplanes. I love the absence of culture, the overabundance of food, the stoic middle-distance stares of my fellow travelers signaling a total lack of interest in me and my back story, the in-flight entertainment, the tiny bottles of liquor, the duty-free shopping that somehow suggests you're beyond jurisdictions, the license to watch 14 episodes of Dog the Hoarding Bounty Hunter in a row, the dearth of things to do besides sit down or recline. Most of all I love the anonymity, the feeling that you're in a place that has no real geography and a person who has no real identity.

Anthropologist Victor Turner termed this experience liminality — "the space in between." Fine, okay, he wasn't referring to the food court at the Atlanta airport, but to festivals and rites of passage during which social strata and mores are temporarily abandoned and individual identities suspended. But the basic concept holds: People feel a certain thrill in being outside of culture, outside of time and space, and freed of the societal tethers that define them. They like it so much that they end up doing extreme, inexplicable stuff like having orgies or eating live animals or going to Burning Man. I don't do anything like that. I just enjoy airports and airplanes.

This feeling of being nowhere is strangely reinforced by the blandly familiar signifiers that come with the experience — the uniform, mass-produced food and entertainment and furniture and flooring and lighting, all of which bestow a sort of equalizing, leveling force on everything.

Now, maybe you're thinking, I don't care what the smart guy calls it, this girl is just lazy and uncurious and boring. Yes. Fine. I'm okay with that. Seriously. In fact, here's exactly how okay I am: On a trip from Los Angeles to Tel Aviv in September, I had a 13-hour layover in Ataturk International Airport. Apparently this airport is in Istanbul, which is to say this layover afforded a rare opportunity to explore a rich and vibrant culture, to taste the rainbow that is Turkish nightlife, to bathe in the spicy otherness of this foreign melting pot. Did I avail myself of all that?

I immediately checked into the characterless, overpriced in-airport hotel. What other travelers might have found depressing — the "window" that was really just a wall of frosted glass backlit by fluorescent bulbs; the absence of any cultural signifiers, creating the impression that I might just as easily be in Cleveland or Tokyo; the minibar stocked not with Turkish delight or other, uh, Turkish delights, but with Lay's potato chips and Nature Valley granola bars — I embraced. Literally. Like, I gathered the foods to my breast while curled on the bed and devoured them in the manner of a bear preparing for hibernation. Everything around me, from the beige-on-beige décor to the mini shampoos in the bathroom, gave off the same steady message: You have not landed anywhere yet. You are still en route. You are not in any country or any city. You are still traveling; you just happen to be standing still. I slept as soundly for the next eight hours as ever in my life. 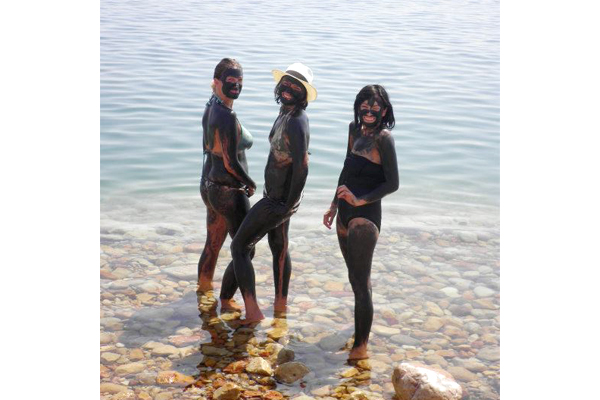 The author, on the right. Yes, the smile looks genuine to us, too.

A few days later in Israel, as I sat huddled in a crowded, underventilated sedan with my cousins and their friends en route to a semi-impromptu visit to the Dead Sea, I took a mental inventory of all things present that I actively disliked: proximity to people I knew and therefore had to interact with, lack of reclinability, faulty climate control, zero sense of when my next meal might be. How unfavorably it compared with my recent Istanbul interlude, replete with reliable A/C, luxury shopping, and companionlessness. Those are my great adventure, I thought to myself grumpily as my fellow travelers loudly shared polyglot in-jokes.

As we parked in the scorching sun and trundled down to the shore, I took only the merest solace in the knowledge that we were approaching the earth's lowest elevation point and one of its saltiest bodies of water. And as I surveyed the bluish, salt-encrusted rocks that dazzle and glow like CGI landforms in the sunlight; the luminous, viscous water that sustains no life; and the landscape that somehow simultaneously suggests ancient history and eerie deadness, I only very reluctantly admitted that what I was experiencing was, okay, fine, pretty cool. And as I entered the water, watching the minerals form oily swirls around my ankles, and gave myself over to its surprising buoyancy, I begrudgingly and silently acknowledged that this was a liminality of its own — a place and time and moment so completely outside of my typical frame of reference that I probably shouldn't deny its power. And as we left for the long drive back to Tel Aviv and then to the airport, where I would board my flight home, I entertained the inkling of a suspicion that the occasional foray into a lesser-known culture and landscape might have a mildly enriching effect on a person.

Then spent the majority of the drive back thinking about which Katherine Heigl movie to watch on the plane. I settled on Life as We Know It. Big mistake.

But that's what the free chardonnay is for.