In her short film My Roots Lie Here, Ellen Silverman (one of our 24 Best Travel Photographers) tries to make a motion picture of home interiors. She ends up with a beautiful meditation on life through the places we inhabit.

As someone particularly preoccupied with getting out of the house, I have to say that no matter where I travel to or how long I'm away for, I am always delighted to come back home. It’s a concept we talk about a lot in the office — we're a group of obsessive travelers who are also enthusiastic home cooks, family (wo)men, and happy couch potatoes.

Photographer and filmmaker Ellen Silverman explores this theme in her documentary short My Roots Lie Here, a 29-minute meditation on what home means to its individual inhabitants. Silverman shot the movie in Cuba, a place she travels to often and loves to photograph (we first learned of Ellen's work through her beautiful cookbook project The Cuban Table).

"I love interiors and am always fascinated by how people use their spaces. What's around and what's near and dear — it reflects what's important to people. When you photograph the environment, you learn a lot about both." Silverman knew how to capture the homes — and what has accumulated inside of them — in still life. But making a moving image of interiors? "I wasn't sure what I could add from a still perspective. So I thought: Let's make it move."

Silverman started with a house in Havana built in 1926. Then she found one in the countryside of Camaguey, seven hours east of Havana. "I was specifically looking for old people who had lived in their homes all their lives. I wanted to ask what home meant to them." Silverman was struck by the language people used to describe their relationship to the places where they live — one of the older gentlemen in the film compares himself to an ancient tree in a garden. "Rooted" was a word Silverman heard often. It seemed that the homes were the lifeforce keeping these people alive. 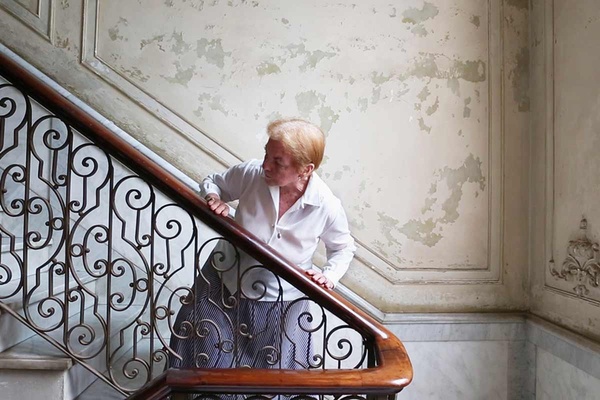 The film is divided into sections focusing on one house and owner at a time. Being that it's Cuba, the scenes are visually rich with nature, old relics, and decaying grandeur. The movie is slow and contemplative with very little dialogue. And that, says Silverman, is appropriate because, “it's about old people. It's about patience. There is a lot of ambient sound. I avoided using Cuban music because it's too rhythmic and moving. There is a unique sound that accompanies each house. Luis sings. Josie play an out-of-tune piano. Pedro uses the typewriter. Armando whistles all day long. There are birds chirping, dogs barking, nice street noise.”

It's lovely to see glimpses of everyday Cuban life: action of the streets, neighborly banter, family visits, and pets. Though the theme is universal, Silverman manages to captures intensely personal moments and string them together like pearls on an heirloom necklace. Fastidious combing of hair in a room filled with old books. Quiet prayer on a patio after Communion. Wrinkled hands pulling seams from a piece of fabric.

I found that once I crossed the threshold into a new vignette — peering into the lives of the characters, peeking at the stuff accumulated on shelves, watching the plants take over the gardens — I didn't want to leave. And I think that's the point.

MORE ABOUT THE FILM

My Roots Lie Here will be shown at the Havana Film Festival in New York, April 7-15, 2016. It was also shown at the New Latin American Festival in Havana, Cuba, which Ellen suggests is worth a visit.

The film was shot with a Canon 5D Mark 3.

In Focus: A Cuban Food and Love Story
Warm Up with Some Cuban: A Recipe for Garbanzo Stew
Fathom Guide to Cuba