Milan is Italy's neglected middle child — often overshadowed by the cultural attractions of Rome and Florence and the beachy glamour of the Amalfi Coast. Rome-based writer Arlene Gibbs knows this is a tourist's folly. These are the spots that make Milan the star of her Italian opera.

MILAN – I live in Rome. This fact, according to an unwritten Italian law, means that Milan is a city I shouldn't enjoy. There is serious beef between the two cities. It's not as bad as the Crips versus the Bloods, as one expat friend in Milan has assured me, though it's similar to the Los Angeles versus San Francisco competition.

Milan has a reputation for being cold, snobby, and — the ultimate put-down — too organized. Many tourists skip it, believing there is nothing to see in the business, fashion, and design capital of Italy.

Imagine my surprise when I went to the Salone del Mobile, the huge international design fair, and instead of finding the Milanese to be stereotypical chilly and well-dressed, I found them to be friendly, helpful, and, yes, well-dressed.

I had a fantastic time in Milan. My Roman friends (and even some Milanese) credited the Salone, but Milan is having a moment. With Expo 2015 right around the corner, there's a palpable exuberance in the air. This is where I like to find it. 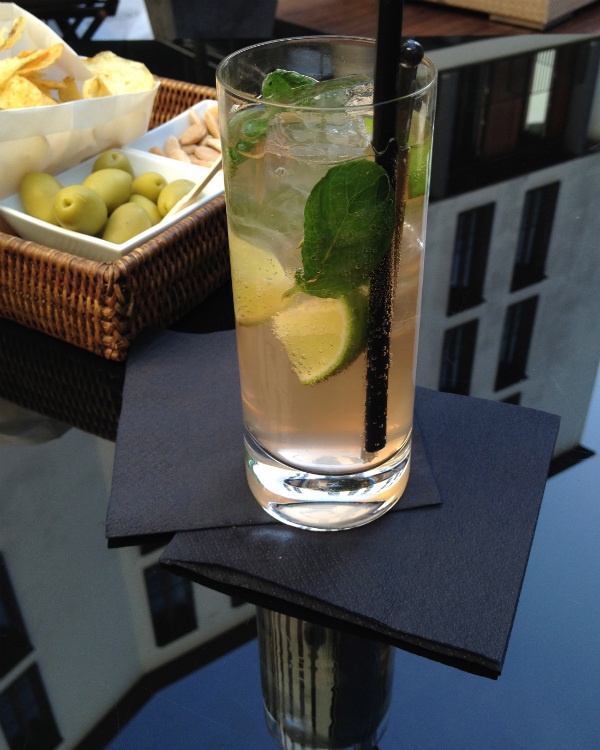 A cocktail and a hotel reflection at Hotel Bulgari. Photos by Arlene Gibbs.

Bulgari Hotel
Via Privata Fratelli Gabba 7/b; +39-02-805-8051
Opened in 2004 in an 18th-century palazzo, the sleek and stylish hotel is an excellent place for an aperitivo and people watching. If you can score an outdoor table, it's worth every euro.

Caffè Cova
Via Montenapoleone, 8; +39-02-7600-5599
Founded in 1817 and seriously old school. I had an iced tea by the bar and felt like very Bondish. Yes, it's popular with tourists, but it has a neighborhood feel because of all the shopkeepers, locals, and business people stopping in for their quick espresso breaks. 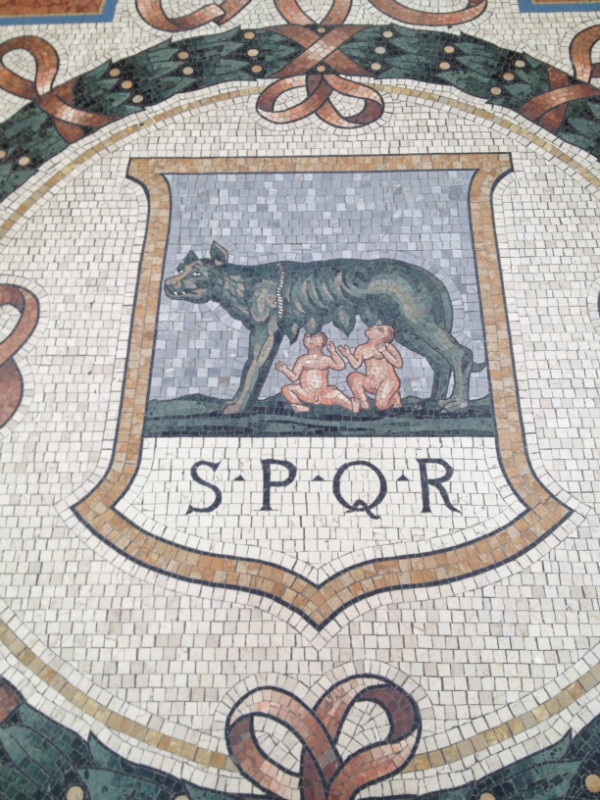 One of the four city floor mosaics (Torino, Florence, Milano, Rome) in the Galleria. This is the symbol of Rome, the author's home city.

Gallerie Vittorio Emanuele
Piazza Duomo; +39-02-7740-4343
Opened in 1867 and one of the oldest (and most beautiful) shopping arcades in the world, it was built during Unification, a turbulent time in Italian history. The word "mall" doesn't do it justice. It's a gorgeous building. Don't miss the Prada flagship a store. It's been in business since 1913.

La Rinascente
Piazza Duomo; +39-02-885-21
The elegant department store's top floor has restaurants, a food market, and an outdoor café; with a bird's eye view of the spires of the Duomo. The main floor has an incredible selection of cosmetics and perfumes. The basement is all about design, with a designated Kartell section, bookshop, and café.

The Duomo
Via dell'Arcivescovado, 1; +39-02-7202-2656
It took more than 500 years to finish the city's incredible gothic cathedral, one of the most iconic and important landmarks in the city. Go up to the roof for the views, and so you can know for the rest of your life that you got that much closer to heaven. 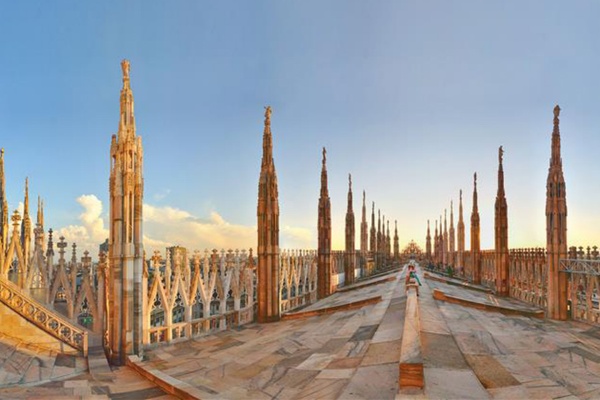 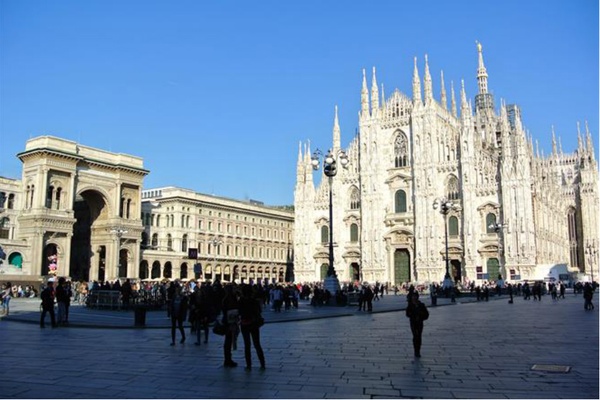 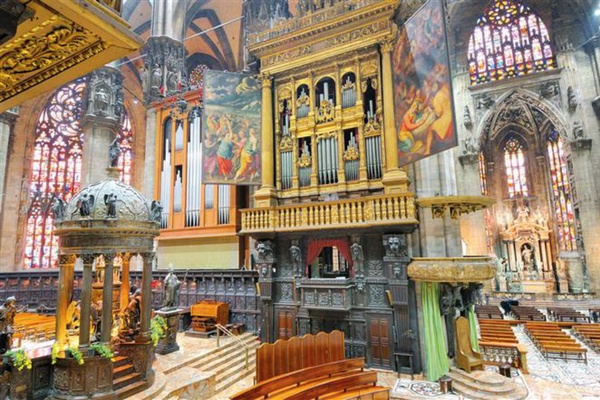 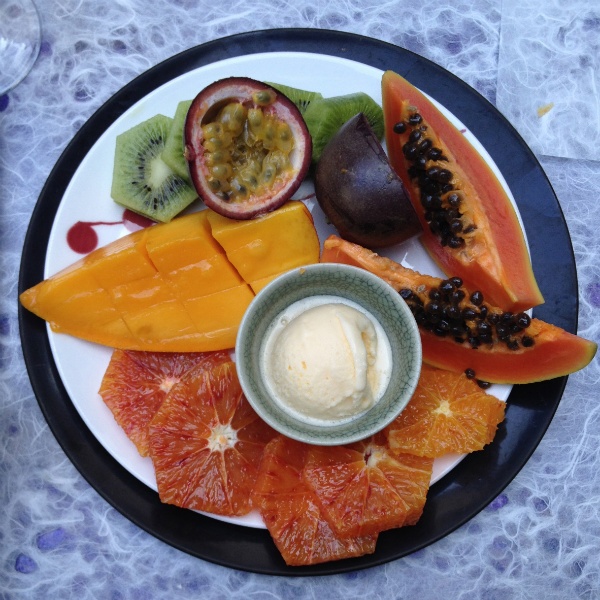 A fruit plate at Corso Como.

Corso Como
Corso Como, 10; +39-02-2901-3581
I had a delicious late lunch at the restaurant, which is located in a pretty outdoor garden. Perhaps my opinion is skewed by the fact that I had received the largest pour of wine in my life. The rightly famous store is a must as well. Carla Sozzani, sister of Franca Sozzani, editor-in-chief of Vogue Italia, has an eclectic style, and her combination bookstore, art gallery, and clothing store is a treat for all senses. 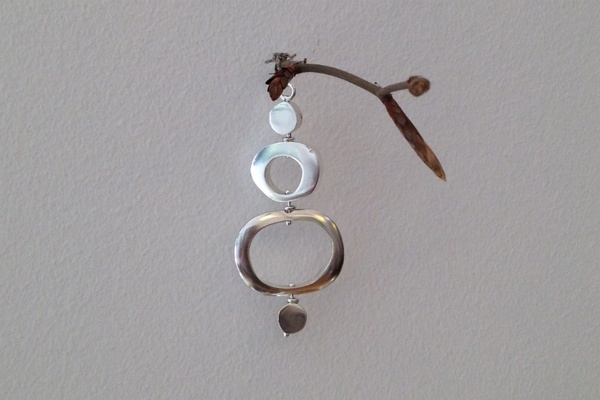 An earring from Atelier Natsuko Toyofuku.

Isola, which translates as "island," is so-called because the area used to be cut off from the rest of the city by railroad tracks. The formerly industrial neighborhood is an interesting architectural mix of Liberty, Modern, and Art Nouveau styles. In the 1990s, artists started to flock here for low rents and today it's a creative hub with artists' studios, new residential spaces, and a few cutting-edge skyscrapers. Google Italia recently moved in, but despite the influx of new restaurants, bars, shops and bankers, the neighborhood still retains its funky charm.

Atelier Natsuko Toyofuku
Via Angelo della Pergola, 8; +39-02-8739-6854
I first heard of this Tokyo-born and Milan-raised designer when I saw her work at Wonderfool in Rome. Toyofuku's bronze and silver pieces combine her Japanese heritage and Italian upbringing and are timeless. 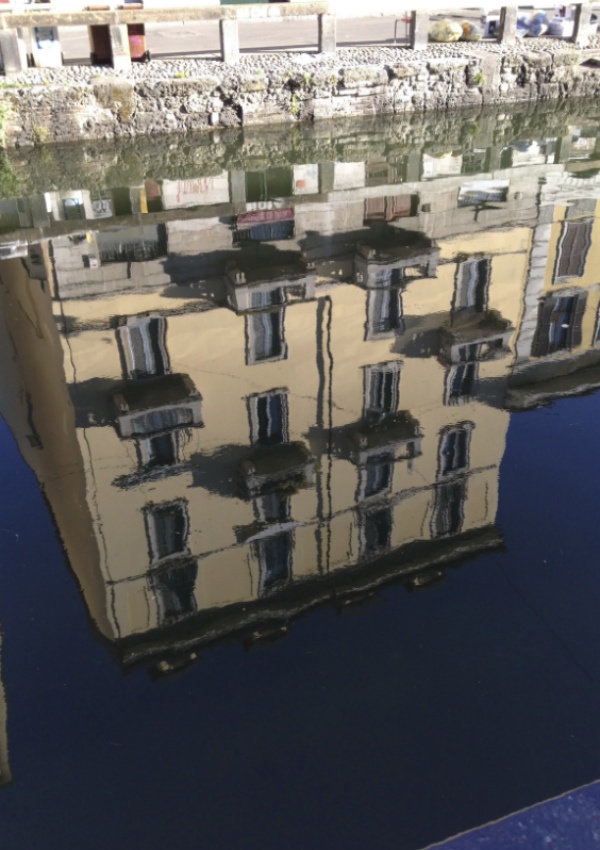 Reflections in the canals of Navigli.

One of the most interesting neighborhoods in Milan has more than 150 km (93 miles) canals, which were used to connect the city to the various lakes and rivers in the region. The oldest one was built in 1179.

The canals were so extensive that Milan, despite being landlocked, had one of the largest ports in Europe. Eventually, with the invention of trains and automobiles, the canals lost their purpose and many were filled in.

Only three canals have survived and the area had become quite desolate. But starting in the 1980s, artists starting moving in and renovating old barges and homes. Not surprisingly, restaurants, bars, and offices for designers, photographers, and other creative professionals soon followed, and the area is now thriving.

Major work is underway on the docks in preparation for Expo 2015, most notably around Piazza XXIV Maggio. I cannot wait to see the changes in the Piazza, especially the glass-bottom area overlooking part of the canal.

Capetown Cafè
Via Vigevano, 3; +39-02-8940-3053
Known for their excellent Americanos, Moscow Mules, and Bloody Marys, the old-school neighborhood spot is always packed with a local, creative crowd that spills out into the street.

Rebelot del Pont
Ripa di Porta Ticinese, 55; +39-02-8419-4720
A tapas bar and restaurant with an outstanding and creative cocktail menu located on the canals. The small plates by chef Mauricio Zillo are inventive with bold flavor combinations. If you are not into foam, pass on eating and just come to drink.

A Few Days In: The Warm Side of Snobby Milan
How to Charm Your Way into Milan's Coolest Speakeasy
InstaTrip: Milan Fashion Week