They say Mexico is a suburb of California, but Plaza México on the outskirts of Los Angeles has quite literally been recreated as Mesoamerican homeland. Prepare to do a double take as you spend a day in the little Mexican enclave.

LYNWOOD, California – I just can't love Los Angeles, no matter how hard I try. But I'm enamored with Plaza México, a little-known shopping and entertainment center in an open-air plaza in Lynwood, a neighborhood fourteen miles south of the city's center. Designed after the Mesoamerican city of Monte Albán, it's like nothing else in Los Angeles County.

Multi-generational Mexican-American families relax by the flower-ringed gazebo, snack on traditional foods, and generally appear happy. And every time I go there, so do I.

I love Mexico and have traveled through much of the country, across nine of its 31 states. I studied in Cuernavaca in the southern state of Morelos, gazed at a starlit sky over Puerto Peñasco on the Baja peninsula, been sloshed at a cantina in the capital's Polanco neighborhood, and slept in a remodeled hacienda near the Caribbean Sea in eastern Yucatán.

And, no, Plaza México is not Mexico. But the bustle of American city life (not to mention LA's usual insanity) slows under its stone arches and in the shadow of a Spanish-style church facade. 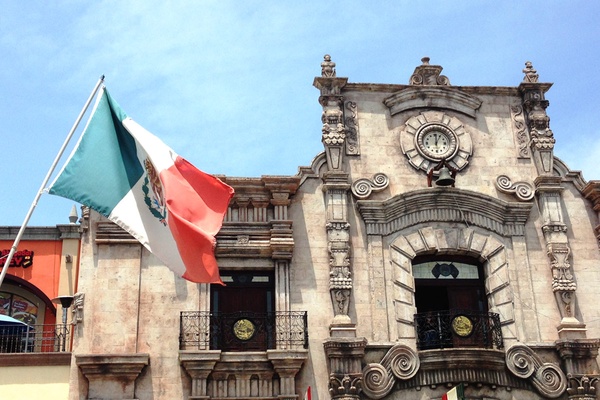 The flag of Mexico is seen waving in the center of the plaza.

I've been here when it's packed shoulder-to-shoulder with people waiting to hear the Spanish singer Shaila Dúrcal, but on a recent spring morning, the plaza was silent and the air dewy. Before the sun could rise high enough to bake the southern California sidewalks, I started my morning at Café Canela with a cup of café de olla ("pot coffee"). This traditional coffee is made in terra cotta pots with cinnamon and Spanish piloncillo or, if that's not on hand, brown sugar.

By mid-morning, as I was browsing stands of handmade objects, I met Leena Minus, a young artisan from Michocán who makes vibrant flower displays from corn husks, dyed leather bracelets, and engraved wood plaques. She works in California and sends money back to her family in Mexico. 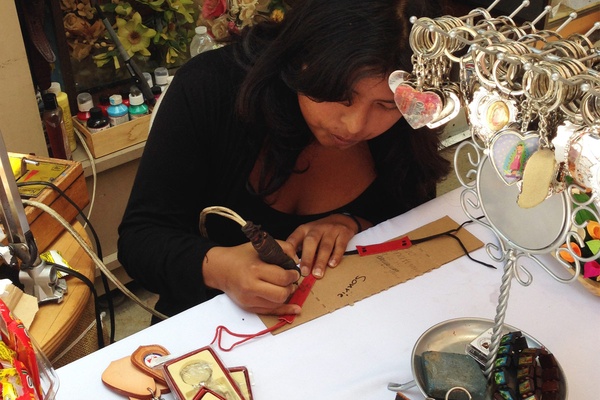 Artisan Leena Minus at work.

Inside La Huasteca, arguably the plaza's best restaurant, is a wall of tequila — hundreds of bottles behind decorative iron cabinets. It's very beautiful and a little bit dangerous. I dove into a cast-iron pan lined with a banana leaf and smothered in queso fundido con chorizo. La Huasteca is only one of many places to seek out tequila, cerveza, or ron. Or to eat something delicious. I made short work of deep-fried tacos dorados at Tortas Ahogadas El Rey and Mexican hot chocolate cheesecake at Candle Light Bakery. 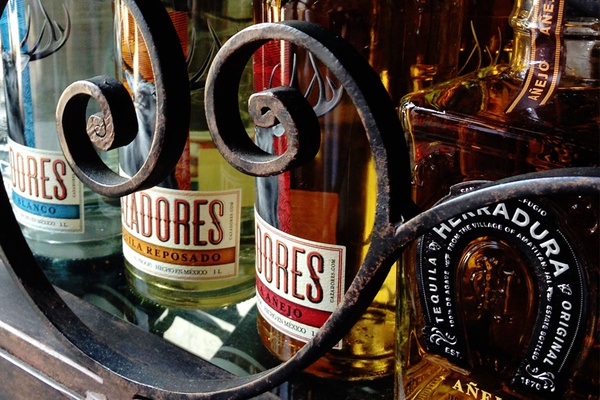 Tequila on display at La Huasteca.

Young women shop for quinceñera dresses and tiaras. The faithful pick up Catholic items like rosary beads and plaques of the Virgen of Guadalupe. My friend asked the price of a small plastic statue of San Antón. The seller didn't tell her, but responded, "The bigger one will answer bigger prayers."

The best way to enjoy Plaza México is to sit and observe. Let the mariachi stroll by the bouganvillia as you close your eyes, horchata in hand, daydreaming about being in a southern city in another country in a quieter era. 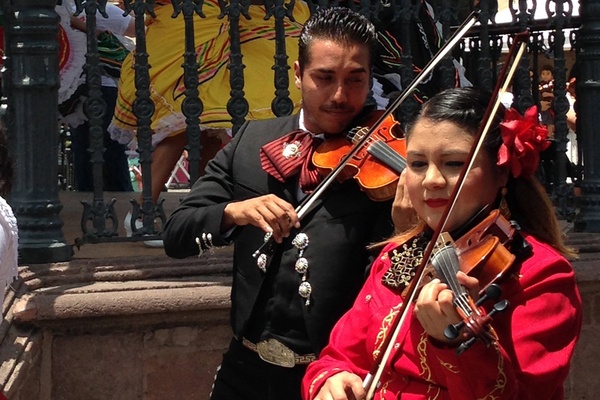 Violinists in the center serenade passers-by.