We continue our exploration of the world's forbidden places with Fathom founder Pavia Rosati's remembrance of Syria.

When people find out I run a travel website, the first question I'm asked is, "what's the best place you've ever been?"

The real answer is "Syria," but it's not a response I'm always comfortable giving.

The country that amazed me was already problematic when I saw it in June 2009. Today, the country is a disaster. Two men were crucified in Syria earlier this week. The jihadists tweeted the photos.

Sarin gas, mass slaughter. The headlines are stupefying; the injustice, unfathomable. I won't pretend to have the political understanding of what's really going on — and I'm disheartened that the world's best political minds don't seem to know what to do. Civil war rages on. The crisis only escalates.

Still, as hard as it is to imagine, eventually the war will end and the country will rebuild and, yes, recover. If nothing else, the passage of time will guarantee it. But the Syria I experienced is gone forever.

And who knows how long it will be before people can travel to Syria as tourists. I visited with my husband Ben and my best friend Julie. We were in the Middle East visiting Julie's family in Beirut and wanted a side trip to another country. The original plan was to visit Jordan, until a Cambridge professor friend who knows the region suggested we would prefer Syria. Julie's Lebanese cousins and my Middle East expert pal Lee Smith were more cautious about us visiting a country run by a regime that was already so oppressive. They agreed it would be an experience, but their warnings gave us pause: "You'll be followed wherever you go." "Tourists disappear in Syria, to say nothing for journalists." 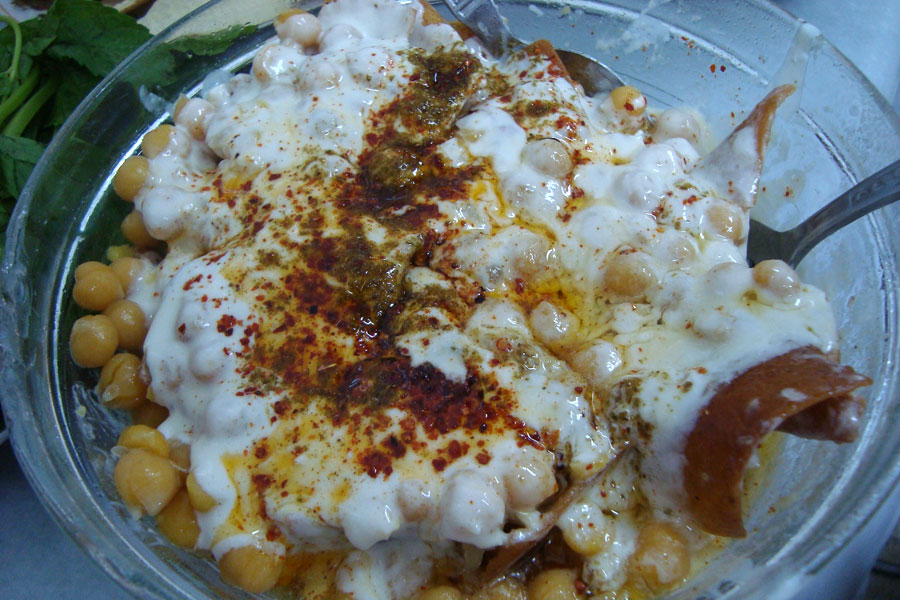 Heavenly chick peas for lunch in the souk in Aleppo.

We hired a driver to take us to Damascus and spent a few days walking the souk, visiting the mosque, eating incredible food, returning every night to Hotel Talisman Al-Ameen. (As of this writing, the hotel website still works. I wonder how long that will last, and who is going there.) We made our way north to Aleppo for a few more days of the same, crossing the largely empty country in between, stopping at the odd abandoned Roman town. In the cities we met friends of friends — diplomats, designers, and activist-socialites — wealthy, Western-educated Syrians who were trying to bring their country into the future. We spent hours talking with the brothers who ran Yasmeen d'Alep, our gorgeous hotel in the Jdaydeh neighborhood in Aleppo. About books and food and travel and culture and, yes, politics. Their take: "Jewish, Arab, Christian — who cares? We don't. These fights are stupid, and Syrians are tired of them." We visited the historic sites and we spent a lot of time in the souk. Everywhere we went, we met shopkeepers, artisans, and locals who were warm and welcoming, in stark contrast to the country's oppressive political environment.

Most of these encounters were with men. As for the women, well, their veils made it hard to get close.

I don't speak Arabic, but I communicated with locals through the lingua franca of smiles and gestures. A taxi driver said, "Barak!" with a huge smile on his face. A waiter delivering a Coke said, "Hillary Clinton!" and gave me a big thumbs-up. Teenage guys in a spice shop used sign language to ask me to take their pictures. Julie and I followed a delivery boy through the souk back to the takeout spot where he worked. We joined the local merchants having lunch ordered bowls of the tastiest chick pea-yogurt soup I've ever eaten (and still dream about).

Yes, we were followed. We saw the same guy every day in Aleppo, not that anything about him felt very threatening. If he found my hunt for the perfect garnet necklace and Julie's for a souzani bedspread that fascinating, good for him. We had nothing to hide.

The textiles, the architecture, the jewelry, the woodworking, the embroidery: Syria's artisanal bounty was stunning. Everywhere I looked, I saw something beautiful. I filled a suitcase with as much as I could. Towels loomed by two brothers for myself and a friend whose four Jewish grandparents had fled Syria in the early 20th century. Vibrant bolts of silk to turn into pillows. Handpainted little glasses in pastel colors. An inlaid wood and mother-of-pearl table. These items now fill my home and, yes, make me happy. I think about the merchants I met in these exchanges, and it's heartbreaking to finish the thought.

A group of men working in a bakery let us into the shop to see their incredible, Rube Goldberg-like bread-making setup. We watched and photographed the process, following the dough in a vat through levers and pulleys until it emerged as a hot disc that was then sold individually or in bags through the takeout counter: literally a hole in the wall. We took photos all together and spent a good hour talking. On our way out, they gave us a bag of hot bread and refused payment. Julie tried to give the eight-year-old working there some money as a thank you. He was psyched, but the older guys refused it for him. "That's not what we want him to learn. That's not the right way to earn money."

I was struck by the country's lack of commercialism: There were no advertisements anywhere. No billboards along the highway. No packaging in the souk. Imagine going into a giant supermarket and finding the cereal aisle filled with nothing but clear plastic bags of flakes stacked high. The variety came from the way merchants stacked their spices and their bars of olive oil soap. This in itself was a visual vacation.

There were only four images on display anywhere: an ad for the national cell phone company — a close-up of a woman and another of a man smiling on their phones — and the face of the president, Bashar al-Assad, and his political ally, Hezbollah leader Hassan Nasrallah. The same posters, everywhere.

About the president who is overseeing the current slaughter of his people. Assad worked as an ophthalmologist in London until 1994 when his older brother died in a car accident and he was forced into power, succeeding his father as president in 2000. His wife Asma was born in London. She studied French literature and computer science. Assad's first year in office saw the birth of the reform-minded Damascus Spring — and its prompt suppression by the authoritarian ruling class. It's incomprehensible that someone like him will have so much blood on his hands.

We had to bribe our way out of Syria, which I found ironic at the time. We arrived at the border crossing at Homs after visiting the hilltop medieval castle Crac des Chevaliers, the UNESCO World Heritage Site which in any other country on earth would be a dream vacation destination for any nine-year-old boy. We spent hours at the same border crossing that is in the news repeatedly now. Our driver was furious with the Syrian border guards. "Preposterous," he said, "I'm embarrassed for my country. Please forgive us." From the back seat of our car, we watched ten guards with AK-47s pile into a Range Rover, a guy in handcuffs sandwiched between them. I got out my camera for a quick photo. Julie and Ben throttled me. "You're an idiot," they said. "Don't you understand where we are??"

It's likely that I didn't even come close to understanding. But that doesn't change the fact that I was so moved by what I experienced in the week I was there.

Most of the time when people ask me the best place I've ever been, it's easier to say, "Salta, in northwest Argentina. And, of course, Sri Lanka."

Contrarian Travel: Go to Egypt. Now.
How to Get into North Korea