The hottest hotel in Miami is as mad as a hatter and as over-the-top as Wonderland. Luxury lobby scout / expert tippler / Fathom contributing editor Kate Donnelly paints a wild picture of the happenings at Faena Hotel Miami Beach. Special COVID-19 Notes: The hotel, the spa, and the in-house restaurants are open, though the Faena theater is temporarily closed. See their coronavirus-related policies here.

The moment you arrive, your notion of grand becomes even more grandiose. Your senses are assaulted as soon as you step into its beautifully overwrought lobby ("the Cathedral"), a cluster of lavish dreamscapes and dazzling decadence drenched in dark red and gold. Catering wholeheartedly and unabashedly to a well-heeled crowd that subscribes to the go-big or go-home philosophy — this is the Faena Hotel Miami Beach.

The story starts simply enough. Like Jay Gatsby, the wealthy, eccentric Argentine developer and hotelier Alan Faena favors a white suit and fedora and is known to work a room. He’s handing you a golden ticket, a glimpse into his world, a spectacularly well-curated tour into the realm of illusion and wild, theatrical Technicolor. This is a place of carefree, high-end consumerism where no expense is spared for in the surround blocks of the self-titled Faena District Miami Beach, which comprise a luxury residential building, two hotels, a fashion emporium, and an arts center. Subtlety was not in drawing board on this one.

Rates start at $500 and change seasonally. Click here for reservations. Or get in touch with the Fathom Concierge and we'll book your trip for you. 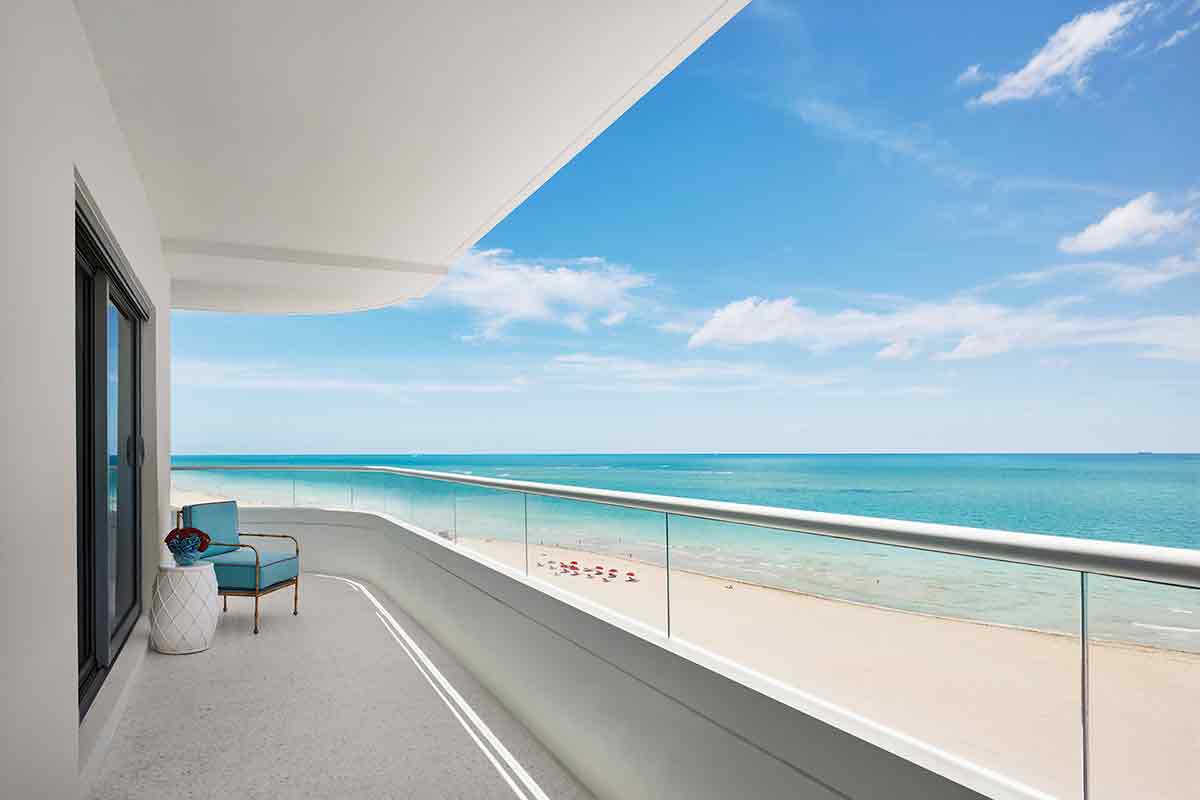 A minimal moment in a maximalist's dream.

In true visual fashion, Faena teamed up with Australian film director Baz Luhrmann and his wife, costume designer Catherine Martin. Their three-way recalls such audacious, beautiful, and delirious films as The Great Gatsby and Moulin Rouge. Now you’re in their latest production, which conjures Moulin’s French stage production "Spectacular Spectacular." The 179-room hotel and its exhilarating flair for the dramatic renders a world deeply rooted in circus, cabaret, and romantic fantasy. 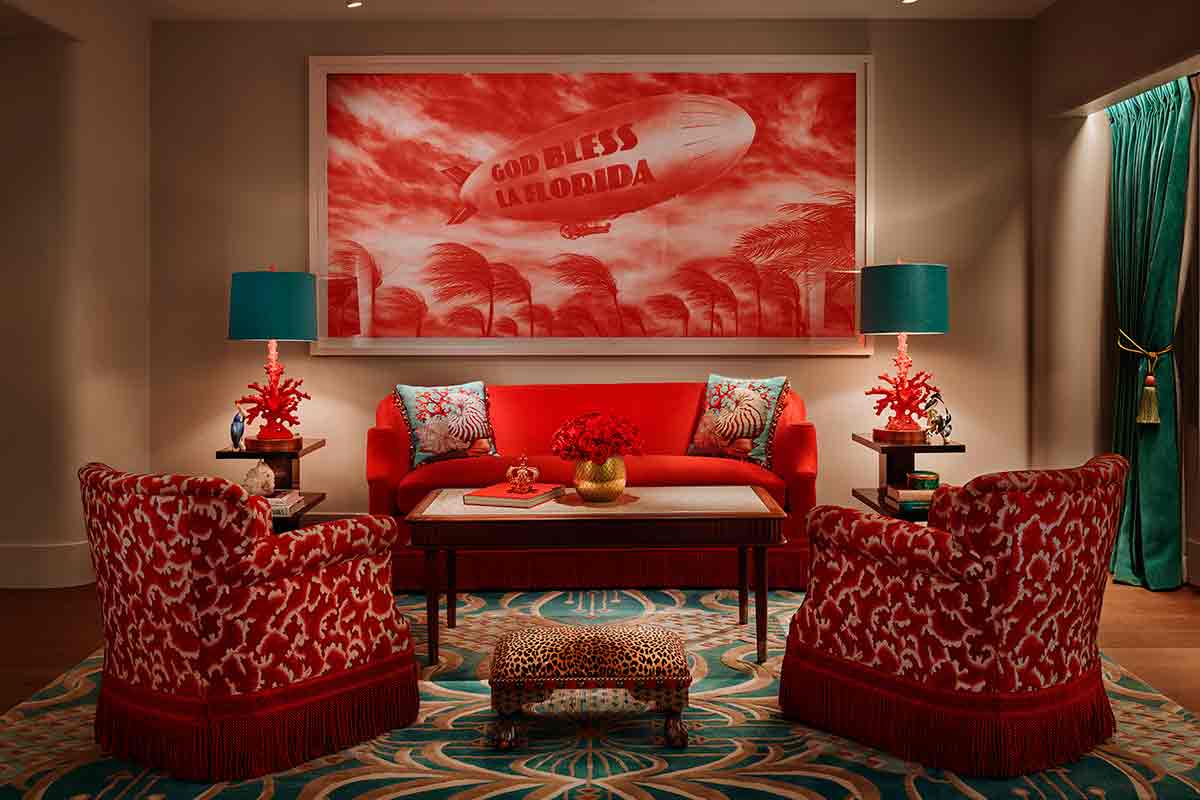 Rest your legs. But not your eyes. 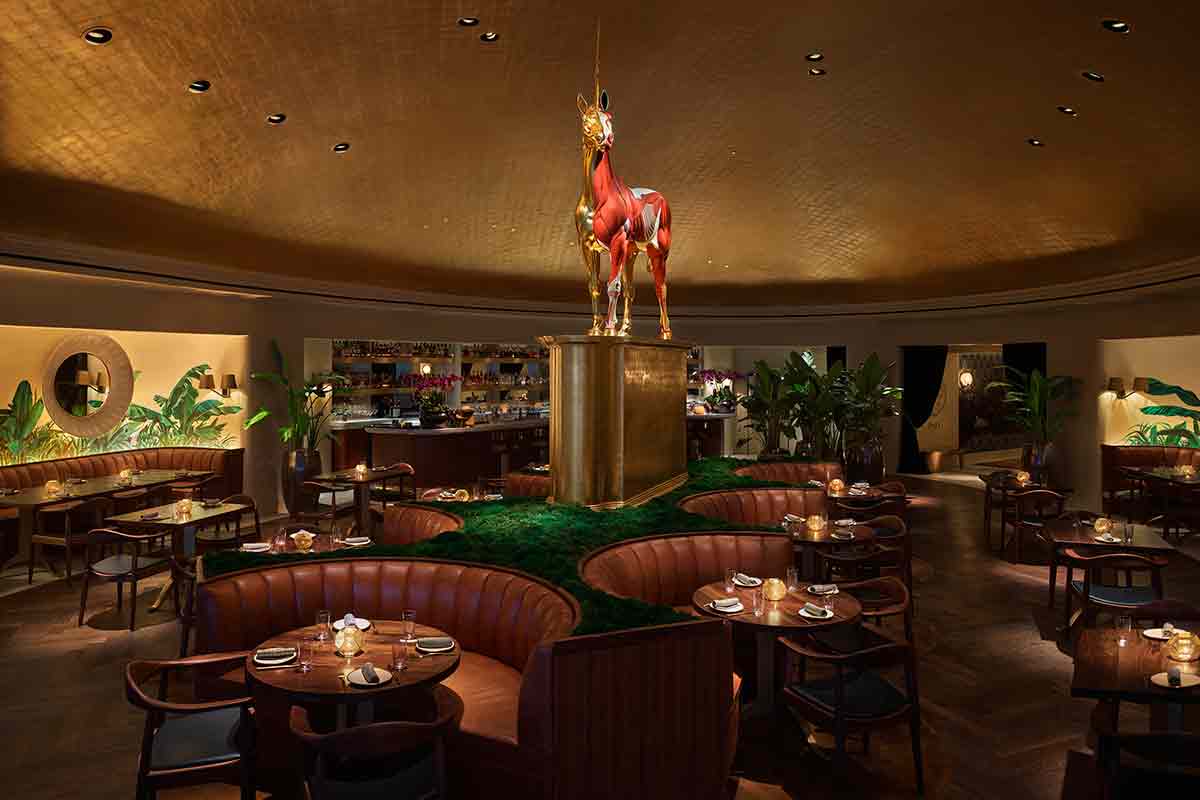 Just up a fantastic spiral staircase is Pao, a mod Asian restaurant from Austin-based chef Paul Qui. The dome-shaped room is anchored by another Hirst creature, a golden unicorn standing guard on a high pedestal. The stage-lit space, filled with walnut tables and deep maroon leather banquettes, is wallpapered with leafy palm images.

And now, for the meal. Expect to spend handsomely to sit in a room of such extravagance (first thing’s first: bespoke cocktails start at $22). Custom stoneware by Jono Pandolfi is flanked by gold flatware. The cuisine, a minimalist coupling of Japanese, Spanish, French and the Filipino flavors, magically melds. One of the most decadently delicious meals of recent memory included dishes like toro berry with fatty Bluefin tuna, a ridiculously rich peanut gazpacho with peanut milk, charred eggplant puree, and pickled bok choy and curry oil (which paired well with a cold beer). The unforgettable Unicorn is a crowned dish of sea urchin, frothy sweet corn pudding and a dash each of kalamasi, chile de arbol, and sake aioli. It’s as legendary and wondrous as the creature itself.

There’s a range of specialty rices with pork and short ribs. A standout is the wild mushroom rice (using a short-grain koshihikari) with pickled onions and bitter greens. Secure baller status when the three-pound côte de boeuf arrives at the table — Wagyu beef bone-in ribeye, yuzu kosho, brown butter, seasonal kimchi, and Japanese sweet potato puree. You’re going to pay $195 for the privilege of eating such a dish.

Just like a wide-angle shot on film, the outdoor seating area commands Atlantic Ocean views and is undoubtedly the place to be seen. Of course, those who do fall down the rabbit hole should be prepared to explain themselves, as they will surely meet a languid caterpillar-like creature or two who are bound to ask: Who. Are. You?

When Money Is No Object: Outrageous Villas Around the World
Take a Day-Trip to Old Europe in Modern Miami
12 Truly Awesome Journeys at Sea