Fathom contributing editor Kate Donnelly checks into the legendary Rockhouse Hotel, a laid-back boutique in Negril, Jamaica, where worries melt away and the food, mellow beats, and ice-cold beer have you feeling irie, mon.

Welcome to Rockhouse Hotel, Negril's effortlessly cool bohemian boutique. Befitting of its name, the strand of 34 studios, bungalows, and villas are woven along a pristine, dramatic cluster of rocky cliffs set on sparkling blue-on-blue Caribbean waters. And there's nothing here to do but take it easy, mon. The local staff is professional, hospitable, and charming. The hip crowd is decidedly unhurried and fantastically laid back, and the vibes lean uniformly harmonious. The rooms are blissfully television-free (namaste…) and leave you with nothing but time to sip an iced cold Red Stripe, linger longer than usual, listen to mellow reggae beats, and let your troubles slip away.

Sign up for morning yoga or take a refreshing dip at the seemingly endless 60-foot infinity pool. Enjoy a warm, bottomless cup of famed Blue Mountain coffee, stroll over to the Rockhouse Organic Garden, check out their bounty, and say hello to Clinton, the mellow dreadlocked Rastafarian. Note the witty signage that adds to the positive vibrations: "Big up, large up, live up." Indeed.

Cliff jumping from the central bridge is a right of passage for the adventurous — and will easily top your Instagram bragging rights. Swim out, return, and climb the red ladders and carved stairs — and work that whole Slim Aarons aesthetic. A lounge and game room has a treasure trove of reggae LP covers, vintage dance hall books to thumb through, chess, and checkerboards. To relax, the spa is all about bodywork and foot massages. The Wi-Fi is solid, though it's better in some spots than others.

The marker for Spa Zone reads "Keep the Vibes Calm," which, as you've surmised by now, shouldn't be a problem. In fact, there are no problems in Jamaica. In August, the hotel added an airy, standalone spa treatment room and a bathing pavilion situated above the cliffs of the aptly titled Pristine Cove. The warm detoxing bathing ritual starts with local fruit, a zinger of a ginger shot (consider yourself warned!), and a cup of warming tea. The menu includes Rapture, to improve circulation; Release, a signature island detoxifying mint journey that helps inflammation; and Restore, which targets sore muscles and jet lag. Whatever you choose, request the magical hands of the kind-hearted therapist Joy. 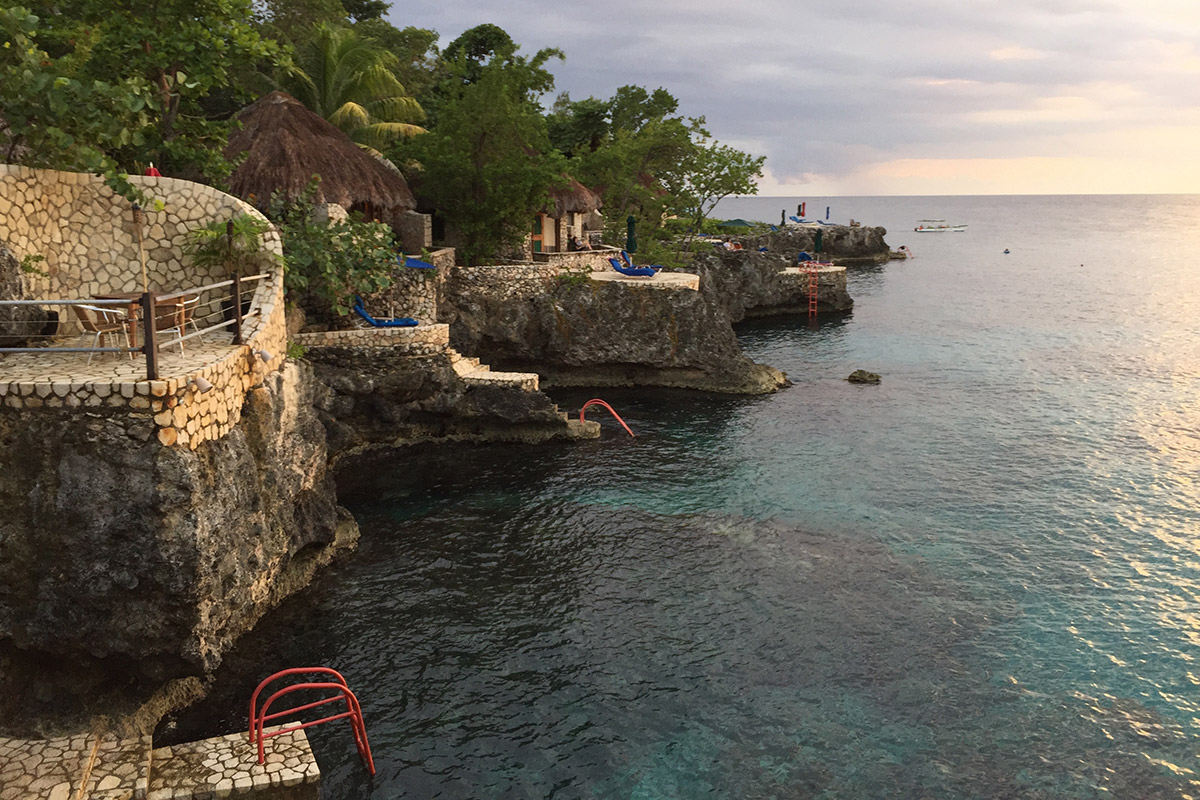 The contour of the hotel. 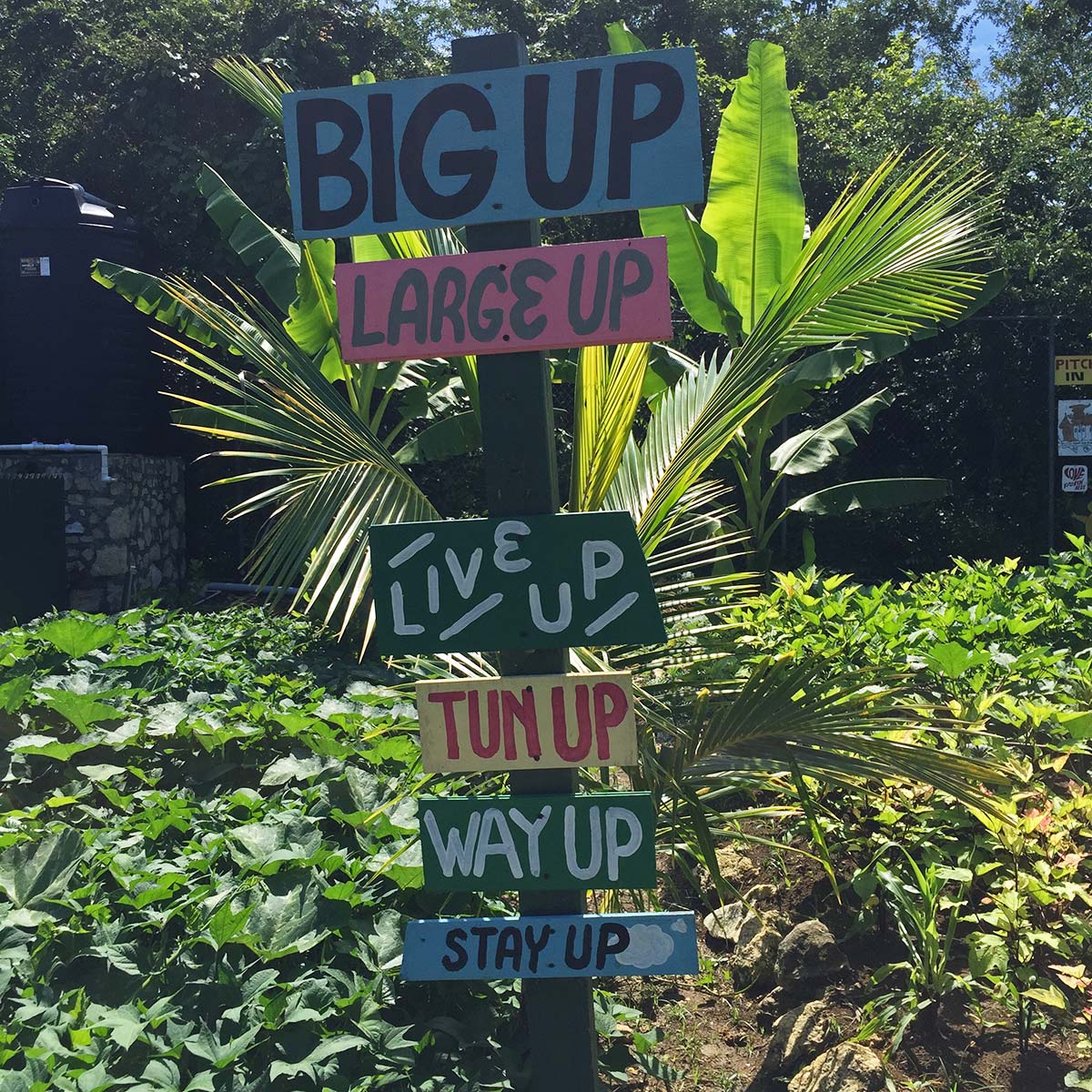 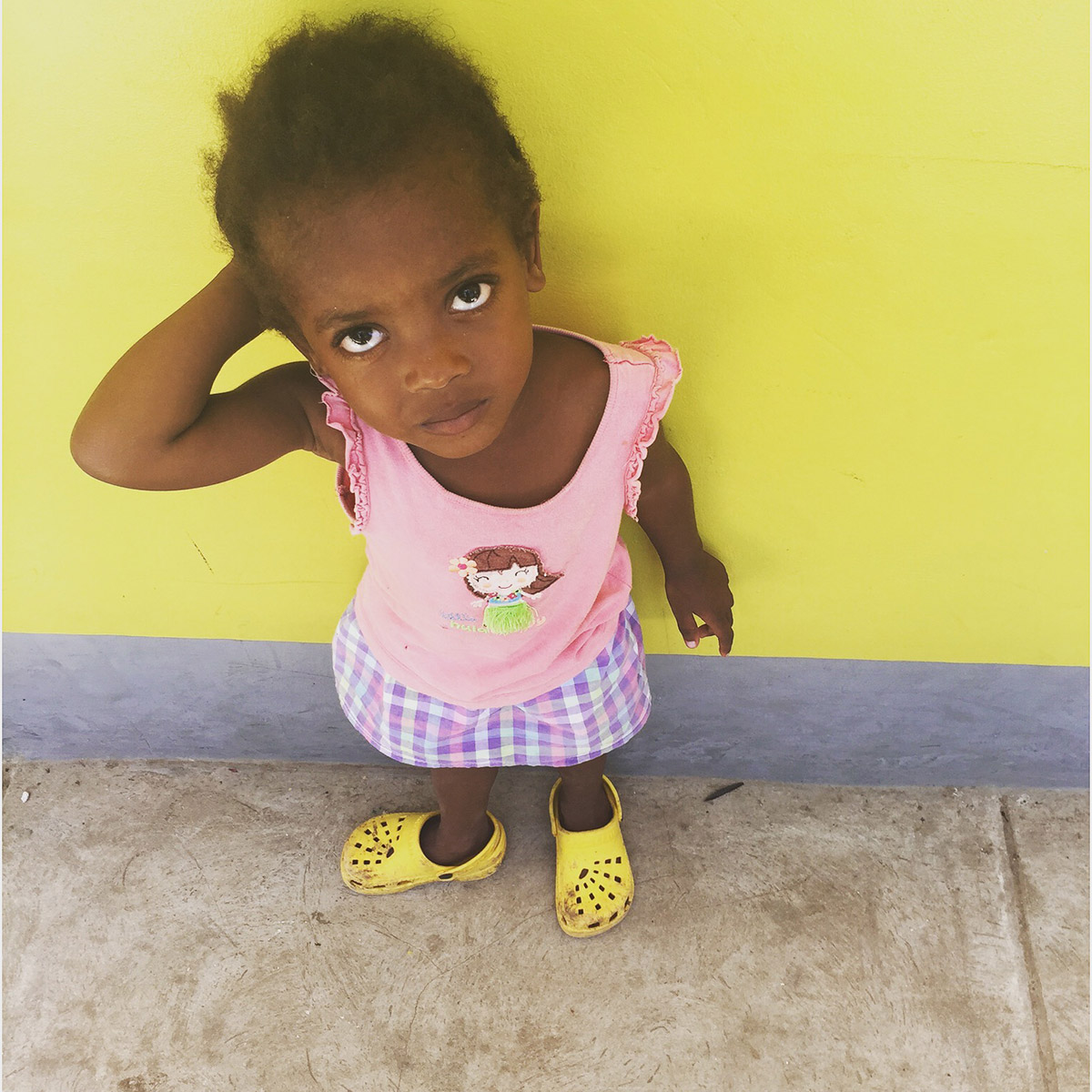 A spirited student from Moreland Hill Primary School just outside of Negril.

This is not the typical hotel agenda. The folks at Rockhouse takes an active, hands-on approach, giving back to local schools, libraries, and educational initiatives. Since its founding in 2004, Rockhouse Foundation has facilitated guest visits to see the beneficiaries of their work, the spirited, smart, and well-rounded students at nearby schools. (Read more about their community efforts in this Fathom story by owner Paul Salmon, and make sure to watch the video.)

Rock 'n' roll royalty has floated through Rockhouse, from the reggae master himself, Bob Marley, to Bob Dylan and The Rolling Stones. Now, a note on cliff jumping. It's a big thing in Jamaica. Nestled between the villas, there's a famed, high bridge from which to jump. Quick aside: One morning, I stood alone on the sturdy wood planks looking down (word to the wise: don't look down) and found the courage to jump (and I do mean courage: that shit was scary). The landing was splashy but safe, and it was nice to take a peaceful swim around the property while the other guests were sleeping. 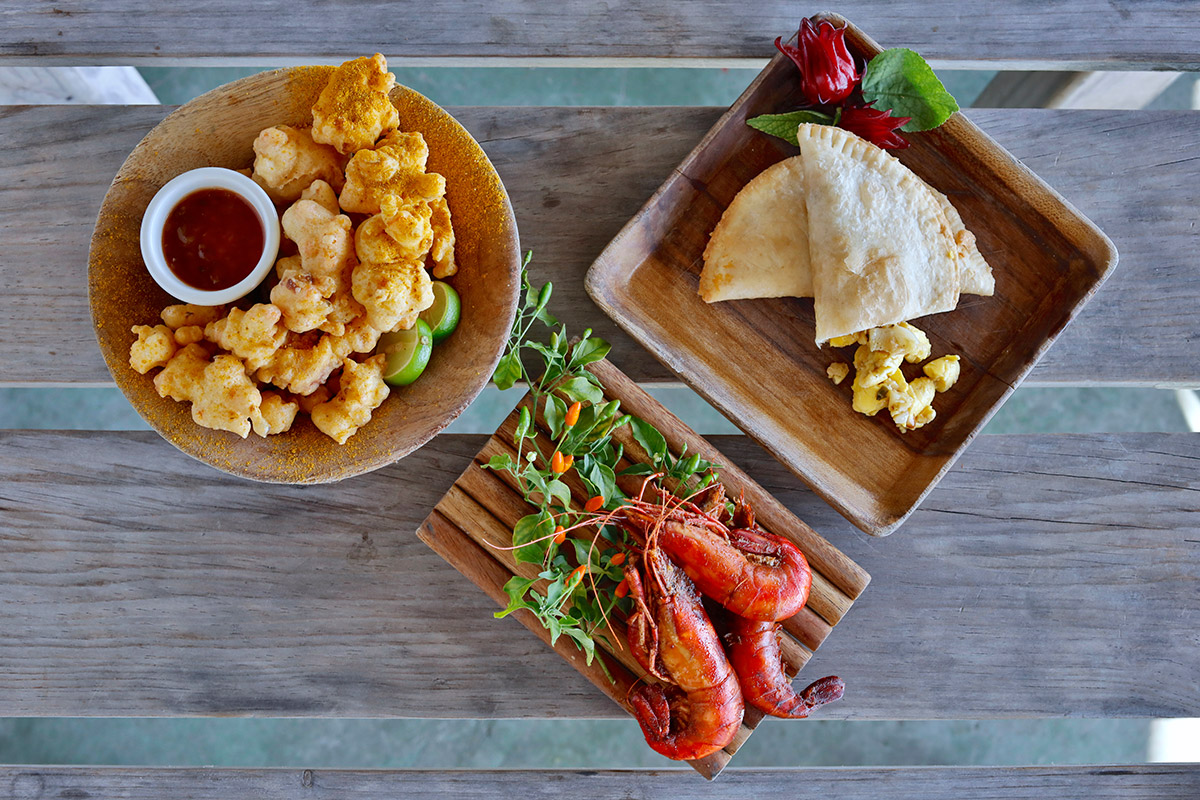 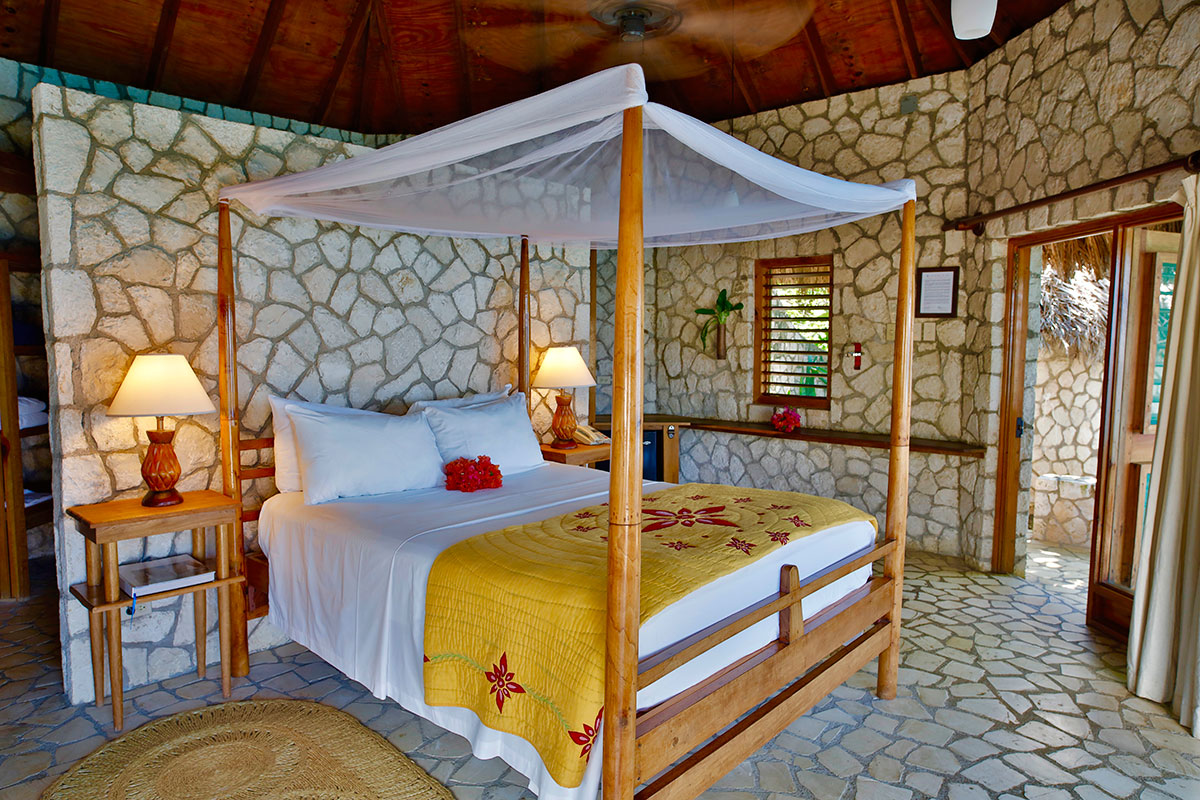 A bedroom at Rockhouse. Photo by Michael Condran.

Rooms are deceptively simple, well-appointed, and rustic, with linen curtains and soft nautical touches. Inside, a simple four-poster bed is adorned with muslin netting and dressed in clean white sheets and a locally made yellow patterned quilt for a pop of color. An overhead fan ushers you into a deep sleep. The focal point at Rockhouse is nature, so spend time on the outdoor terraces cozied up in an Adirondack chair reading or soaking in the endless sea and the golden sunset show. Repeat the process in the morning with an epic sunrise. There's air conditioning in the rooms and outdoor showers for cooling off and using the sweet, local handcrafted Starfish soap.

A free spirit, a romantic getaway, a birthday or special event with a gaggle of good friends, those who crave wellness and retreat and lovers of jerk chicken, rum punch, and ice cold Red Stripe.

Those who fail to appreciate the more rustic charms of an outdoor shower.

The rates, it must said, are incredibly reasonable for the setting and the service. It's a chic bargain in paradise. The season dictates the rates, with standard rooms ranging from $95 in the fall to $180 in winter. Similarly, a premium villa costs $295 in the fall and jumps to $495 in winter. 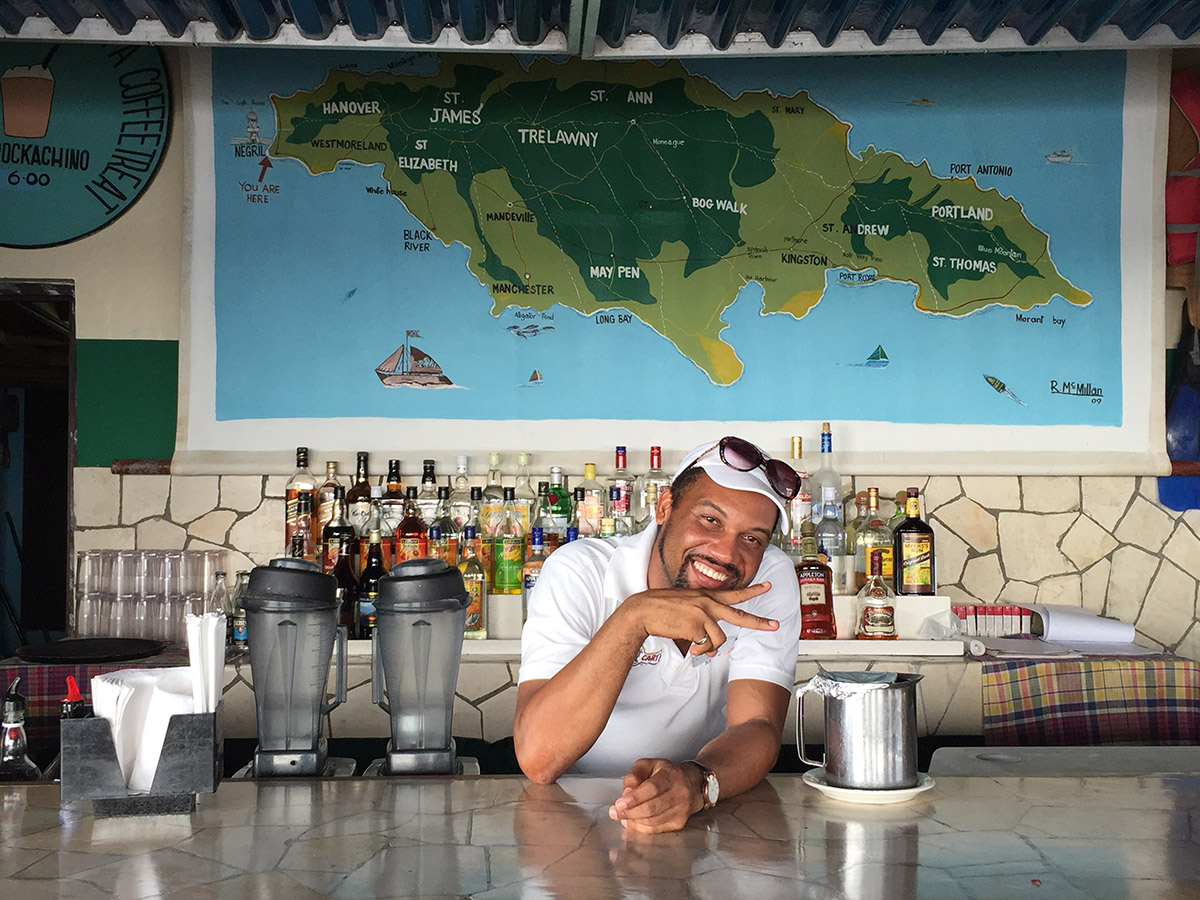 Good vibes from the bartender.

Negril is a small town. Don't miss a trip to Murphy's — a local beach hut gem with delicious made-to-order jerk chicken and a claim to the coldest Red Stripes. Time should not be of the essence here, patience should. It's a special experience.

Rick's Café, which was cool in 1974, is an overly touristy spot on the water. But if you want to kill a half hour watching drunk jimbos diving off high cliffs, by all means. Just skip food and drink.

Situated on the western most tip of Negril, it's a 90-minute drive from the airport to the hotel. You can rent a car or arrange transportation with hotel.

Pesky mosquitoes like Jamaica just as much as you do, so if you're prone to being bitten, nab something powerful (yes, I'll say it, with DEET), although rooms are equipped with spray.

We take every effort to ensure the information in our articles is accurate at the time of publication. But the world moves fast, and even we double-check important details before hitting the road.