Time for another check-in with Richard Bangs, our favorite adventurer of the old-school variety. He's living it up in Bermuda, to the tune of rum highballs, pink sand beaches, and knee-high socks with shorts.

BERMUDA – Like many who have made it to adulthood, I wince when I recall my youthful antics. (What I did in the name of "fun"...) Like a lad who graduates from cheap whiskey to fine wine, today I prefer my pursuits with a dash of panache, a subtle aroma, and a delightfully delicate nose.

Which made a treat to discover Bermuda, the place that practically invented proper fun.

The demure 21-square-mile British dependency 650 miles off the coast of North Carolina coast is less known than its more cheeky Caribbean counterparts. It has always attracted a more sophisticated crowd, the cognoscenti tired of long septentrional winters, a cast that likes to keep its haunts semi-secret. The island is known more as the northern point of the Bermuda Triangle and less for its earthly satisfactions. 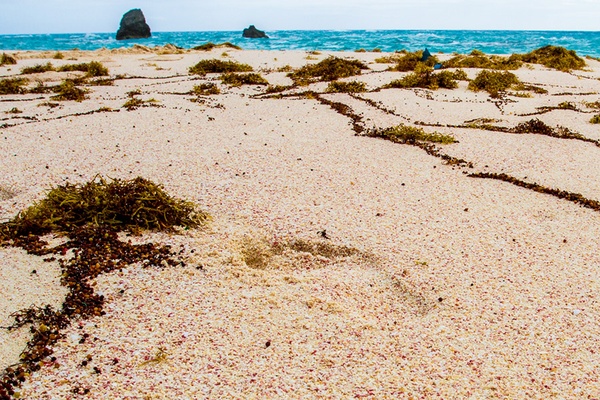 The original Pan Am Clippers used to call here, but I ease over on a Delta flight from Atlanta. From my window, Bermuda's islands look like cracks in the ocean; the sea, a crème brûlée after the first blow of the spoon.

I take a short cab ride to Rosewood Tucker's Point Hotel and Spa, a sprawling 200-plus-acre cliffside resort on Castle Harbor, where I find my free-spirited, properly traveled friend Lisa Niver in the midst of a round of golf. She's here for the week with friends; I only have the weekend. Her beam telegraphs that she has the better deal. She sinks her shot, and a waiter appears with a glass of champagne to celebrate.

We tuck in for afternoon tea, served promptly at 4 p.m. Cucumber sandwiches, petits fours, and freshly baked apricot and fig scones with kumquat jam and Devonshire clotted cream are served on a crisp white tablecloth with silver service and fine china. Some traditions never change: Lisa's parents sipped tea in nuptial celebration 52 years ago on honeymoon in Bermuda. 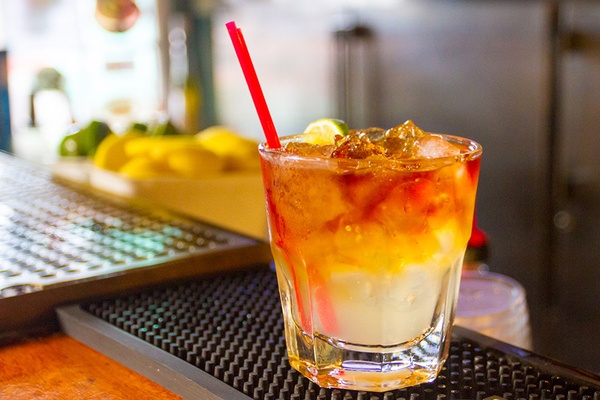 A well crafted dark and stormy.

High tea is just the prelude. We head over to Tucker's Bar, where Lisa's parents once cheered. With dark wood paneling, it looks more like The Explorers Club headquarters in New York City than a seaside watering hole. I have a dark and stormy made with rum and Bermuda stone ginger beer, the island's signature drink. But Lisa cries foul and holds up her rum swizzle, claiming that hers is the national drink of Bermuda. Then the barkeep leans in and says, "No, no, no. The real drink here is the Yellow Bird," and pushes a glass filled with what looks like a screwdriver, with vodka replaced by two types of rum. But then he winks and informs us that there are at least 60,000 rum swizzle recipes, one for each resident of Bermuda. Lisa is right — the rum swizzle reigns.

We could sit and sip for hours, but it's dinner time. Next door is The Point Restaurant, wrapped in an 80-foot-long mural that looks hauntingly familiar. Turns out, the piece adorned the lobby of the Pan Am Sky Club in New York City for 45 years. Pan Am was a partner in the early days of Sobek, the adventure travel company I founded in the 1970s. I used to visit the Sky Club when passing through New York.

I walk around the room falling into memories. The mural depicts various ports of call of early Pan Am Clippers, and I recognize most. Rio de Janeiro, Constantinople, Hong Kong's Victoria Harbor, the Port of London, and Lahaina, Maui, are easily identifiable from their inimitable surroundings. But New York Harbor, Canton Harbor, Gloucester Seaport in Massachusetts, and Beirut Harbor stump me. The real puzzler, however, is Bermuda's Hamilton Harbor. It was added to the canvas a few years ago by the current owner, Ed Trippe, the son of the man who commissioned the original piece, the legendary Juan Trippe, founder of Pan American World Airways.

We sit and I order the famous Bermuda fish chowder, a spicy seafood and vegetable stew spiced with a dash of Gosling's Black Seal rum and Outerbridge's Original Sherry Pepper sauce. Fish, to taste right, must swim three times: in water, in butter, and in black rum — and it's swimming Olympic laps here. The national dish is delectably textured and spicy, a well-seasoned soup that ignites Sherry Pepper Sauce's leap into immortality.

After a couple of heavenly spoonfuls, I'm reminded of the many ways to cheat on food and the many places that do. But not here. Bermuda is a promise of authenticity and proper taste. It's a fountain of home-cooked and savory food. Hoppin' John, hash, peas and plenty, mussel pie, sweet potato pudding, paw paw casserole, guinea chick, banana meatloaf, wahoo salad. All tantalizing fare, wet with contour and risk. In my short visit I try them all, and smack lips with every bite.

This island may have more churches per square mile than any country on earth, but a good Bermudan meal makes me feel more charitable than any sermon. After my meal, I think of seling my house and giving all the money to Oxfam.

I would say that Bermudan food is so deliriously yummy that palates are not merely shattered but planets spin out of orbit, constellations unravel in starbursts, and the very fabric of space-time is shredded by the sheer euphoric energy of taste.

Okay, maybe that's an exaggeration. But I will say the food of Bermuda is properly good.

I wash down my meal with a proper English tropic drink, a Bombay Sapphire gin and tonic and tell Lisa, who plans to head out in search of the famous Gombey dancers of Bermuda, that I have to call it a night.

A golf cart glides me to my villa under brilliant stars that bend to create bears and dippers. My room has a bathroom the size of Somerset and a bed like a cloud. I awake late the next morning alive and unworn, ready for a full day.

Lisa and friends are split between Fairmont Southampton and Elbow Beach Resort, both spectacular properties on the southwestern part of the island. Under a glade of blue sky, I sink into the back seat of the taxi and regard in admiration the orderly English hedges and hand-stacked stone walls that line the road. If it weren't for the wild tropical foliage that weaves through the cracks and crawls along the tops of the walls, this could be the Scottish countryside.

There's something romantic and quaint about a place that doesn't rent cars. Around here, folks scoot. Lisa's been zipping around the island on a rented scooter, scoping out jewelry, forts, cafes, restaurants, and island culture. She shows me the heart earrings and bracelet she bought from Alexandra Mosher, famous for her pink sand jewelry. She pulls up pics of cliff jumping, spelunking at Smuggler's Cave, and hula-hooping at Elbow Beach, where she sampled the rum swizzle specialty spa treatment. And she tells of the Gombey dancers, who perform a flamboyant masquerade dance of African, Caribbean, and British influence.

Lisa shows me nearby Warwick Long Bay beach, a magnificent half-mile stretch of pink sands. Bermuda, she honeys, is so romantic that even the beaches blush.

Against a backdrop of low grasses and grape and juniper trees sprawls a powdery stretch of sand festooned with little coves and black rocks revealing Bermuda's volcanic origins. The original seafarers called this Devil's Island, because of the imposing black rocks and the screeching and snorting they heard coming from the interior (birds and wild pigs, respectively). Four hundred years ago, when an English sailing vessel was shipwrecked on this mid-Atlantic archipelago and discovered it was a piece of paradise, the island nation of Bermuda was born. 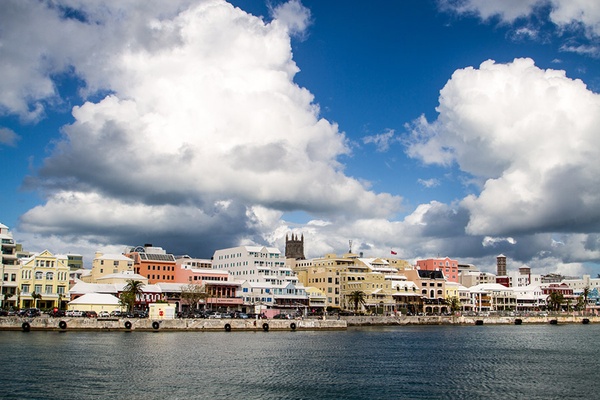 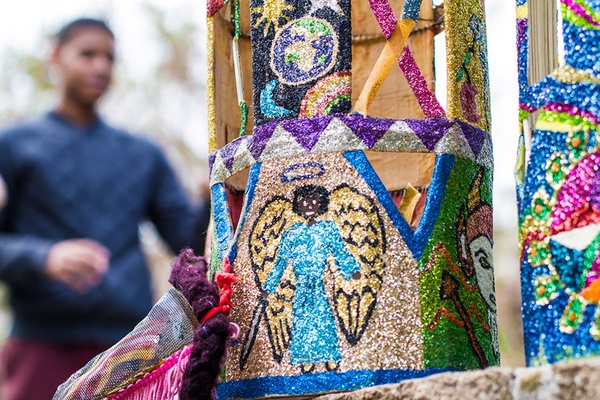 Lisa dances around the sand for a spell, then offers to show me the harborside capital, Hamilton. The houses are sherbet-colored, with stepped limestone roofs that collect all-important rainwater, as there are no lakes, rivers or streams.

Here we meet Ronald K. Maughan, director of operations for The English Sport Shop, which has been outfitting islanders since 1918. Ronald says the shorts were invented when British forces in India during WWI were suffering from the heat in their long pants. "It was too hot, so they cut their trousers into shorts." They were baggy and without any defining style, but they were cool, and the improvised clothing followed British forces to Bermuda, where it was decided that, given the temperatures, shorts were a smart item for one's wardrobe.

But it's the socks that make the outfit, says Maughan. Knee socks must reach just below the knee, no more than an inch, and must be folded over. Socks should match the jackets, contrasting with the shorts. It's attire for proper fun.

Next door is The Pickled Onion bar, one of many establishments that carries with the word onion. Why the fascination with the tear-inducing vegetable? It turns out Bermuda was for many years a major supplier of onions. These days, the locals are sometimes called onions.

It's lunch time, so we head down the road to one of the best kept local secrets, The Black Horse Tavern, hidden in a remote corner of St. David's island. Locals say this is the most authentic restaurant for local cuisine in Bermuda.

The place has a dusty rose exterior with green shutters and a glass-covered balcony in the rear that overlooks Smith's Sound. I order wahoo fish sandwich on raisin bread (why don't they offer this in the United States?) with sweet homemade coleslaw and ginger beer. Like so many things here, the food is not subject to immutable destiny, but alive to wild grace.

Ashley Harris, a local guide, joins our table and offers to show us about. With bellies full, we wind to the top of St. David's lighthouse, and then down to Tom Moore's Jungle, also called The Walsingham Nature Reserve, twelve acres of preserved, privately owned land. "Tom Moore" is the island-friendly shorthand for Thomas Moore, the 18th-century Irish poet who for a short time called Bermuda home. He wrote some of his most celebrated works here while resting under Bermuda's most famous tree, the calabash. Ashley recites some of his poetry, we nod in reverence, then trek through the jungle, snaking around vines and through shafts of light penetrating the canopy. Bermuda's tropical karst is on pocked display here, with caves and grottoes winking, blind eyes the color of wet coal. Some of the dark eyes are dry, others are filled with water and even tropical fish. We linger at the largest grotto in the area and relish in the tranquility. The only sound is the drip, drip, dripping of water from the stalactites.

Our final stop is at The Southlands Estate, the largest grove of rubber trees in Bermuda. The original Tarzan movies were filmed on a lake in Culver City, California, not far from my house. The producers should have come here. Ashley demonstrates by grabbing a thin vine and swinging out over a small cliff. Soon she has the rest of us gyring about like baboons, thumping chests and letting out throaty Johnny Weissmullers at the apex of a swing. 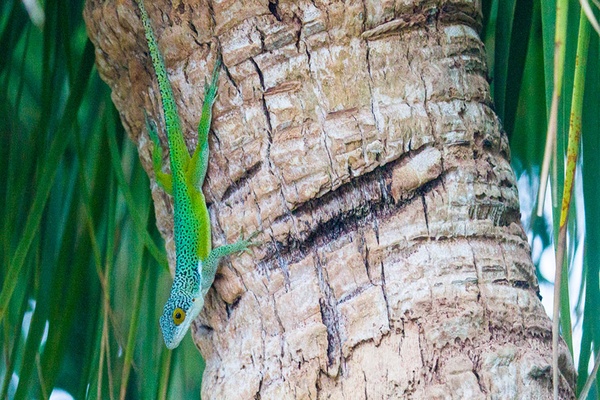 Now it's off to the airport. On the final stretch of roadway we pass The Swizzle Inn, where Lisa spent an evening as an anthropologist, studying nightlife with locals. It's a place filled with fun, from the signage throughout ("If you're drinking to forget, please pay in advance") to their signature rum drinks to their motto: "Swizzle Inn and Stagger Out."

And that's how I leave Bermuda: Properly blissed, and ready to return for more.