On a recent trip to Las Vegas, Fathom's Pavia Rosati has an adrenaline-rich afternoon doing something she never thought she'd do: drive a NASCAR.

LAS VEGAS – My history with race cars looks something like this:

On tail end of trip to Disney World in Orlando, NASCAR-obsessed younger brother Peter begs mother to stop in Daytona on the way back home to New Jersey. Nice Italian mother indulges son. Since I'm not old enough to drive myself anywhere, we all spend the day watching cars tearing around an oval ring. For endless hours. And hours. Brother in heaven. Me bored to tears.

Racing down route 130 from my best friend Jessie's house in East Brunswick to my house in Hamilton. Me in my Ford Taurus, Jessie and Peter in her VW Golf. New Jersey State Trooper (officers notorious for having badass take-no-prisoners-alive attitude) clocks us doing 88 mph in 50 mph zone. Jessie pulls up alongside me, rolls down window and says, "Cop. HIDE." Fast thinkers that we are, we pull off the road into an abandoned lot, drive to the back of a decrepit building, and park beside an abandoned trailer. Cop follows. "Girls," he says, "did you think I wouldn't find you? Really?" Miraculously, no speeding tickets are issued nor moving violations filed, much as they're warranted. Jessie, Peter, and I think it's all very exciting. My prosecutor father, less so.

Fiancé at the time takes me to see Formula 1 races outside Rio. It's a hot spring Sunday, and all I can think about is the feijoada I'd rather be eating and the waves I'd rather be body surfing in Ipanema. Then-fiancé takes photos with zoom lens — eleven rolls of film to be precise — of cars speeding by. In circles. And more circles. For hours. Then-fiancé totally enthralled. Me bored to tears.

On the runway at JFK, I post an Instagram picture and mention that I'm on my way to Las Vegas for a wedding. When I land, Kurstin Christie, a publicist who I know casually, has sent me an email asking if she can connect me with her hotel client and, "totally out of the box — I also work with the Richard Petty Driving Experience so I can get you on behind the wheel of a NASCAR race car and on the track if you want."

Thanks, I write back, the client isn't right for Fathom. But, um, hello, DID YOU SAY RACE CAR DRIVING? Because while I may have no interest in watching cars go speeding past me at top speeds, I absolutely do have an interest in being the one doing the speeding. And as coincidence would have it, Jessie, she of the racing experience on route 130 a few decades ago, was meeting me in Vegas for the wedding. I couldn't imagine a better partner in crime. This had to be a sign.

Done, Kurstin replied. You and Jessie are all set for tomorrow at noon. Pick-up is at the Paris casino at 10:45. Have fun. 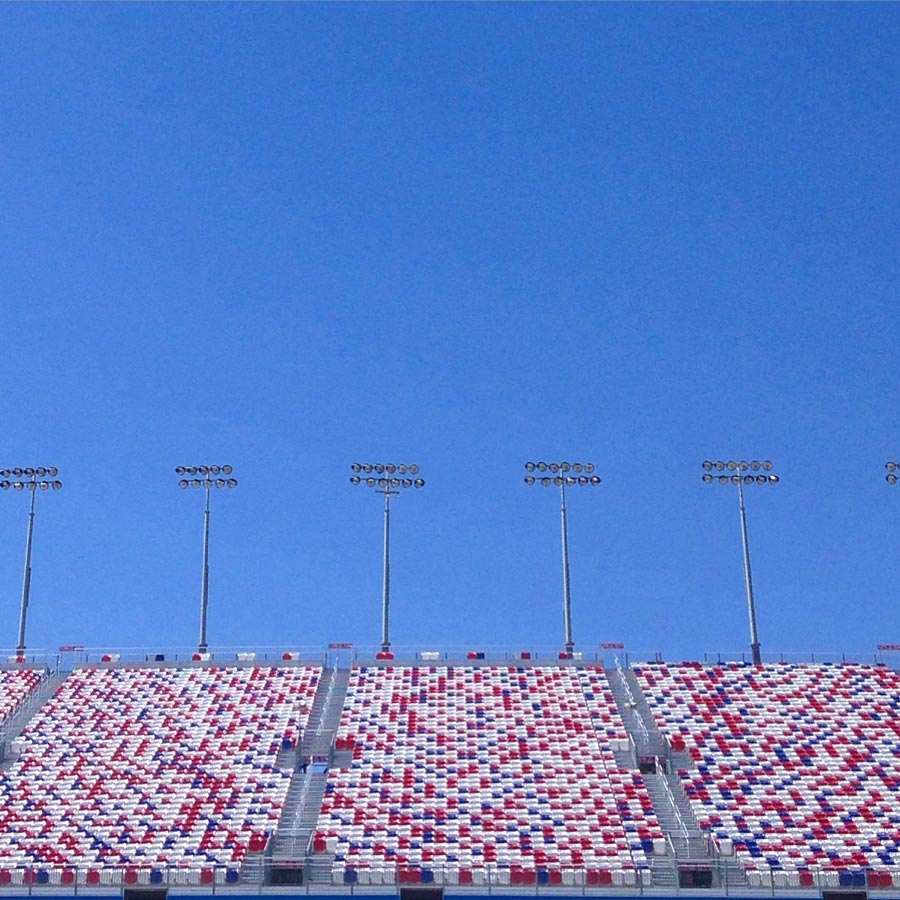 It's a gorgeous sunny Saturday, a perfect day for a drive. I had spent Friday night with the wedding party bragging about the racing I would soon be doing. Really, I couldn't shut up about it to everyone. Except the one person who really needed to know: my brother, lifelong race car fanatic. In another coincidence, that same Saturday was his birthday. How could I break it to him that I'd be spending his day in the NASCAR way?

Jessie and I piled into the van for the half-hour drive from the Strip to the 1500-acre Las Vegas Motor Speedway complex, which is home to several companies designed to deliver the automotive experiences that dreams are made of: muscle cars, Ferraris, NASCAR, Indy.

Walking into the office, we cross paths with two guys who had done the morning run.

"How fast did you get?" our driver asks, which I come to realize is really the only question everyone cares about.

Preparations for the drive are extensive, and begin with me signing my initials nineteen times on an 11x14 double-sided document labeled "WARNING!" wherein I release Richard Petty from any responsibility should I, you know, perish. "I hereby personally assume all risks of any nature for any death, injury, or other damages to myself," it reads. Pretty exciting stuff!

Jessie, a doctor with four children and more responsibility before 9 a.m. than I have in a month, raises an eyebrow and ask complicated questions about the quality of safety precautions and, specifically, the stability of our necks and spinal columns. I've suffered massive head trauma on vacation before in a moving vehicle, but, of the two of us, she's the only one using her brain. She's assured that we will be fitted with sophisticated neck and head protective gear in addition to a helmet and the very sexy fire suits we've been issued. She nods and signs her release.

Safety is a major theme of the day. This is clear as soon as our instructor, Ryan from Wisconsin, begins his ten-minute class and informs the dozen of us in the session what we'll be seeing on the track: acceleration and deceleration cones and gate marks designed to give drivers the fastest line on the oval. "Hold the wheel with finesse," he says. "And hold it gently, like a pool cue. And you should be nervous. That's okay. Just don't be cocky. Cocky is when you get into trouble."

Of the nine of us who will be driving, only three are women. The youngest driver looks to be 22; he's with his father, who is in his 60s. Everyone else falls in between. Several men are with wives, who are there to watch, not race. "I'd rather spend the $500 shopping," one of them tells me. (This is only one way in which the whole racing experience conforms to so many Americana, gender-specific, beer-drinking, and gun-owning stereotypes. For example: "Watch what you say on the video in the car," we're warned. "You don't want to end up like the guy who said he wanted to add laps to his run but couldn't because he needed the money for strippers. Poor guy couldn't show the video to the wife!")

Speaking of numbers, let's get down to speed. The custom-made cars at Richard Petty have a V8 engine and manual transmission. They are made for speed, durability, and safety and were essentially built solely for the purpose we'll be using them for: driving really, really fast around a track. The cars are capable of going 180-190 miles per hour, but if we do between 115 and 125, we should be proud. "And anything above 125," Ryan promises, "is just awesome."

We're shown a video starring the actual Richard Petty, former NASCAR champion, who, wearing a giant black cowboy hat, explains that he started his company in 1992 because he wanted to share how it felt to be in a stock car. Even in the classroom, I can't stop jumping up and down. I'm too excited to play it cool.

We head out to the track and take lots of photos with the show car. Everyone in the gang becomes friends through cameras and poses. "You look so cool!" we keep screaming to each other. We're fitted with helmets, which have built-in microphones. I feel invincible.

We take our turns getting called onto the track and into our cars, which are selected according to our respective sizes. I'm called over to car 43, where my attending pit crew is ready to get me going. At this point, I swear it's Coincidence Day, because 43 is my lucky number and is the age Peter is turning today.

My neck protector is strapped tighter and my helmet is rechecked. NASCARs don't have doors because they're a solid piece of material over a skeletal frame. (Apparently everyone knew this except me.) So I jump in through the window, Dukes of Hazzard style. (More badassery.) I shake hands with Don, the right seat driving coach who is there to make sure I don't die or wreck the car. Another member of the pit crew places the steering wheel into the car (another thing I didn't know would happen) and straps down an elaborate seat belt. A photographer takes my official driver's seat portrait. "Do you like to drive fast?" Don asks me, then tells me to press down on the clutch and pop it into first gear.

I have eight laps around the track. Don is giving me hand signals (thumbs up for "go faster now;" thumbs down for "foot off the gas") and talking to me through the headset. But I can't hear a thing he's saying. My heart is pounding; my body is on adrenaline overload. I don't know how fast I'm going because there's no speedometer, but I wouldn't have noticed anyway because all I'm doing is watching the track, looking for the cones that tell me when I'm supposed to accelerate and decelerate. You never touch the brake; it's all about the gas. At a certain point, I think, screw it, I'm just going for speed. I'm in an oval, but I can't tell where I am at any moment. It just feels like I'm whizzing around a giant circle. I sit up a little taller in my seat. I don't notice the flag stand, I don't notice the main tent, I don't notice a damn thing.

When I'm sure I must be finished, I asked Don how much longer. "You're halfway," he tells me. "And you're about to pass this guy coming up." There's a car coming up? I can't see it. But in a few seconds I do, and I do just that: I smoke the guy. (Seriously. Will the badassing ever end??)

Sadly, it does. It's time to pull into the inner lane around the track. It's over. I get out of the car. I jump up and down a few dozen times, give everyone in my pit crew a giant high five (my pit crew, I think), thanking them for what was easily one of the best things I've ever done.

Jessie gets into car 43 after me, and I grab my camera. (She has teenagers who need to see Mom in action.) It looks like she's driving in slow motion until she gets close, and I can't get the camera to snap fast enough. I time her laps: about 45 seconds a spin. I can't tell if it felt much shorter or much longer when I was behind the wheel. Time sort of stopped.

She's finished, and she's pretty psyched, too. Our lap times have been recorded on the certificates Richard Petty issues to everyone after their runs, along with souvenir plaques, which I decline to purchase. In a perfect gesture of non-competitive friendship, Jessie and I had both hit 132, though technically she went two-tenths of a mile faster.

I call Peter back in New Jersey to wish him a happy birthday. "Yeah," he says. "I saw the photos on Instagram. How the hell did you do this before me?"

"Did you see it was car 43?" I ask, because I have no good answer to his question.

I don't yet, as it turns out. But I'll go back and drive them anytime. I'm totally smoking 140 in my next run.

Pavia and Jessie with the model car. Feeling very badass. 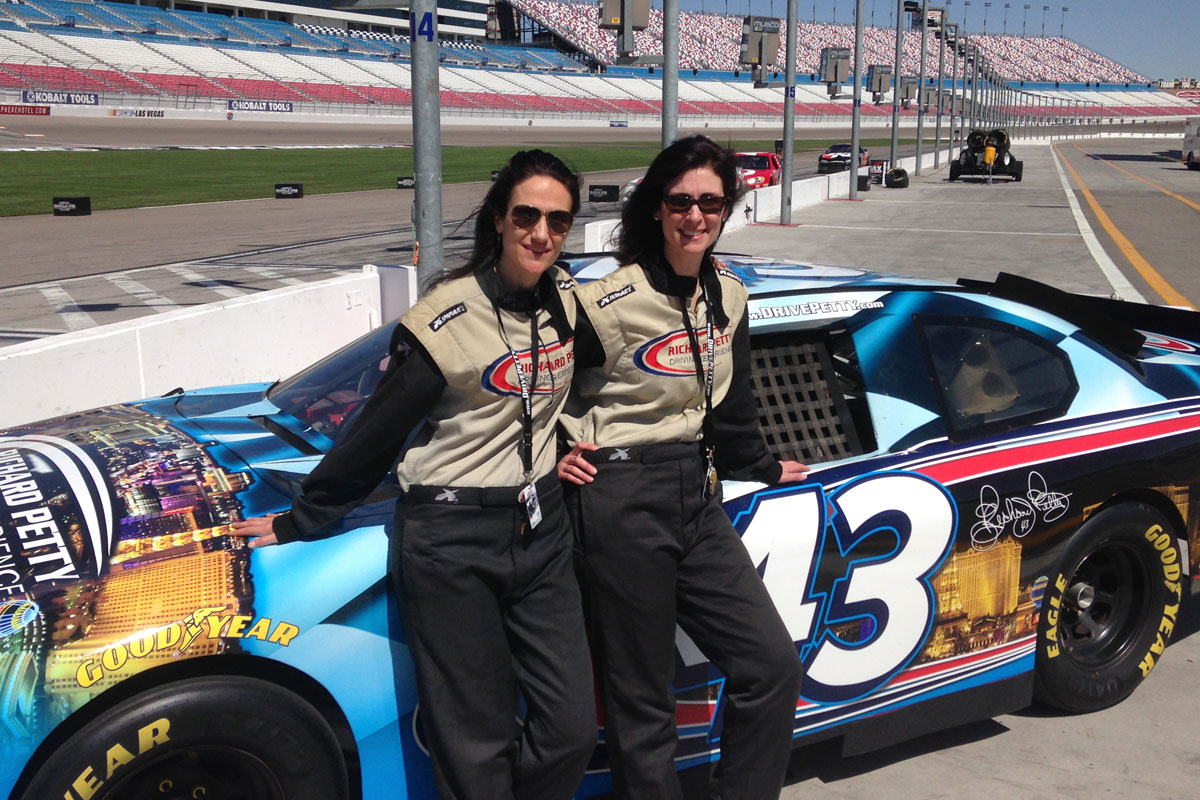 Gearing up with the pit crew. 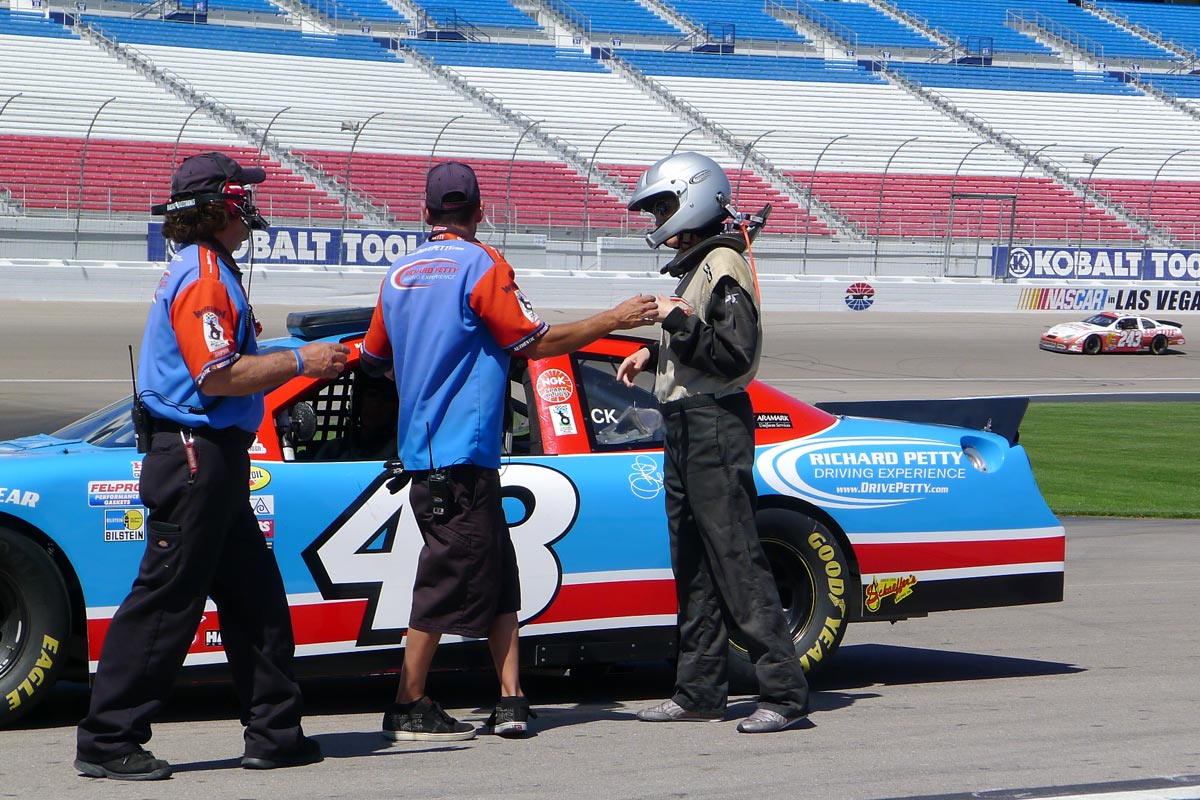 The view from behind the wheel. 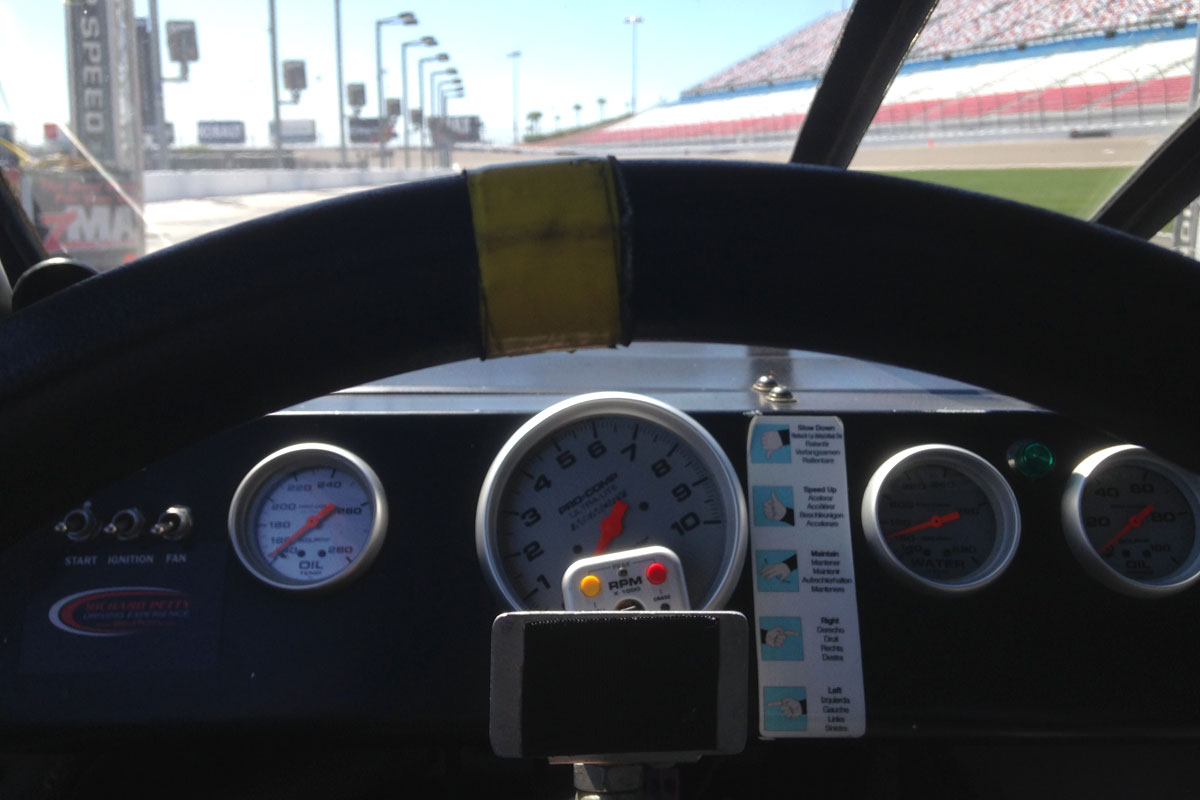 Selfie with Don, my right-seat coach. 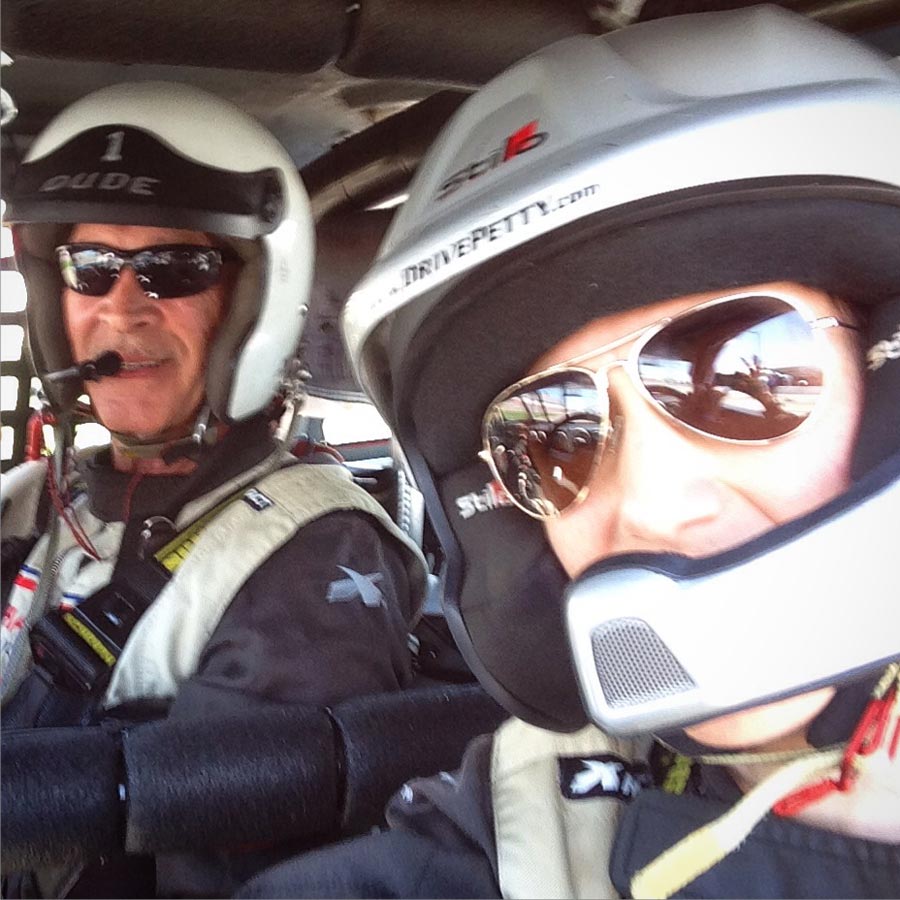 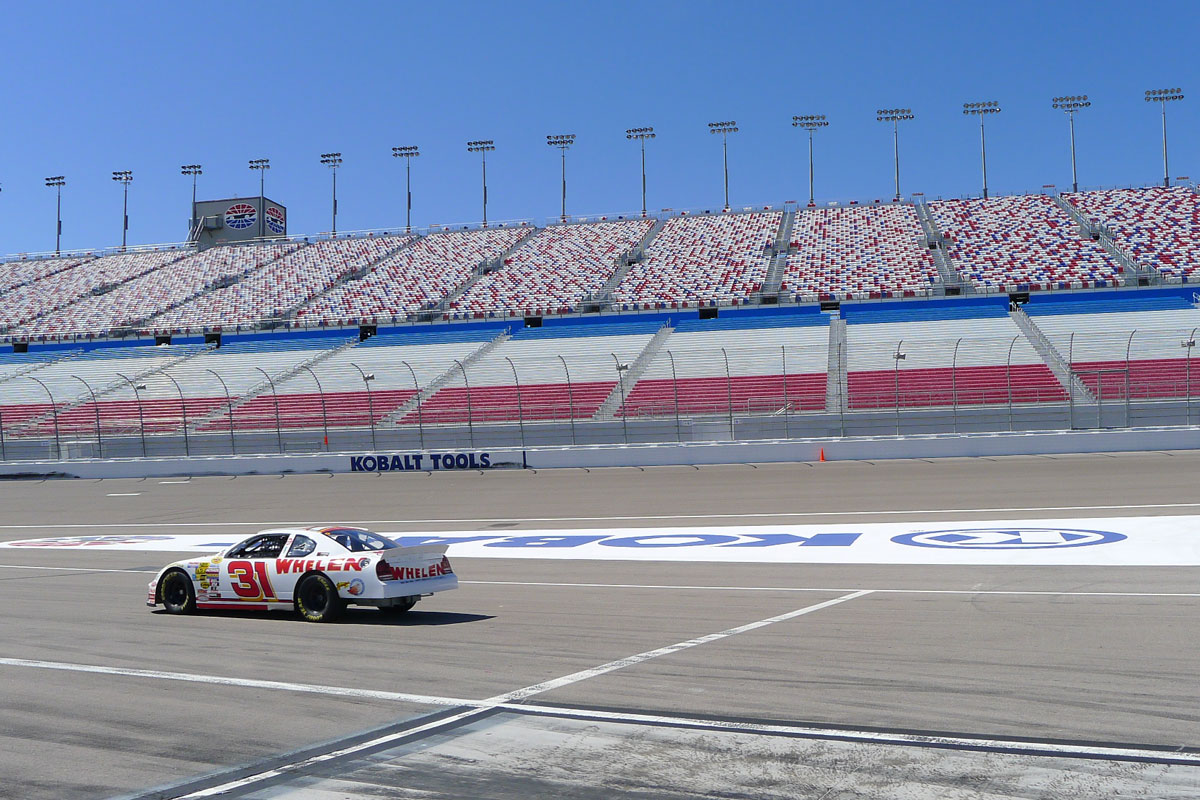 How I felt when was finished. 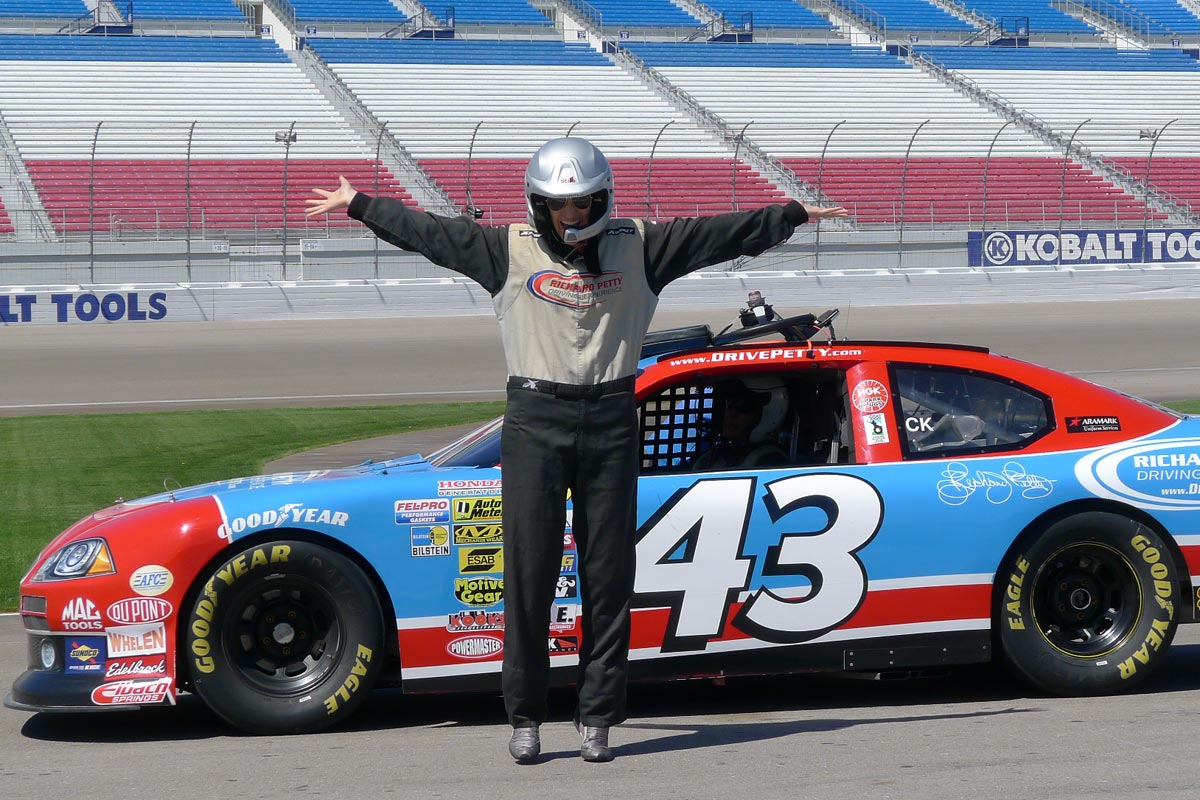 YOUR TURN TO DO IT