When time is at a premium, sometimes the best way to see a city is on a run. Writer Elizabeth Johnson shows us around Chicago in three loops.

CHICAGO – Perched on the southwest corner of Lake Michigan, The Windy City is crisscrossed by the Calumet and Chicago Rivers. Known for deep dish pizza, 77 distinct neighborhoods, sports teams, and stand-up, it would take months (years!) to experience everything Chicago has to offer. But when you only have a few days, the best way to experience the Second City is on the run. With about 11.5 square miles of parks and 68,500 running trails dotting the city grid, there's plenty of green spaces to explore. (Granted, you'll want to avoid the winter months.) So unpack your running gear and hit one of Chicago's many paths. 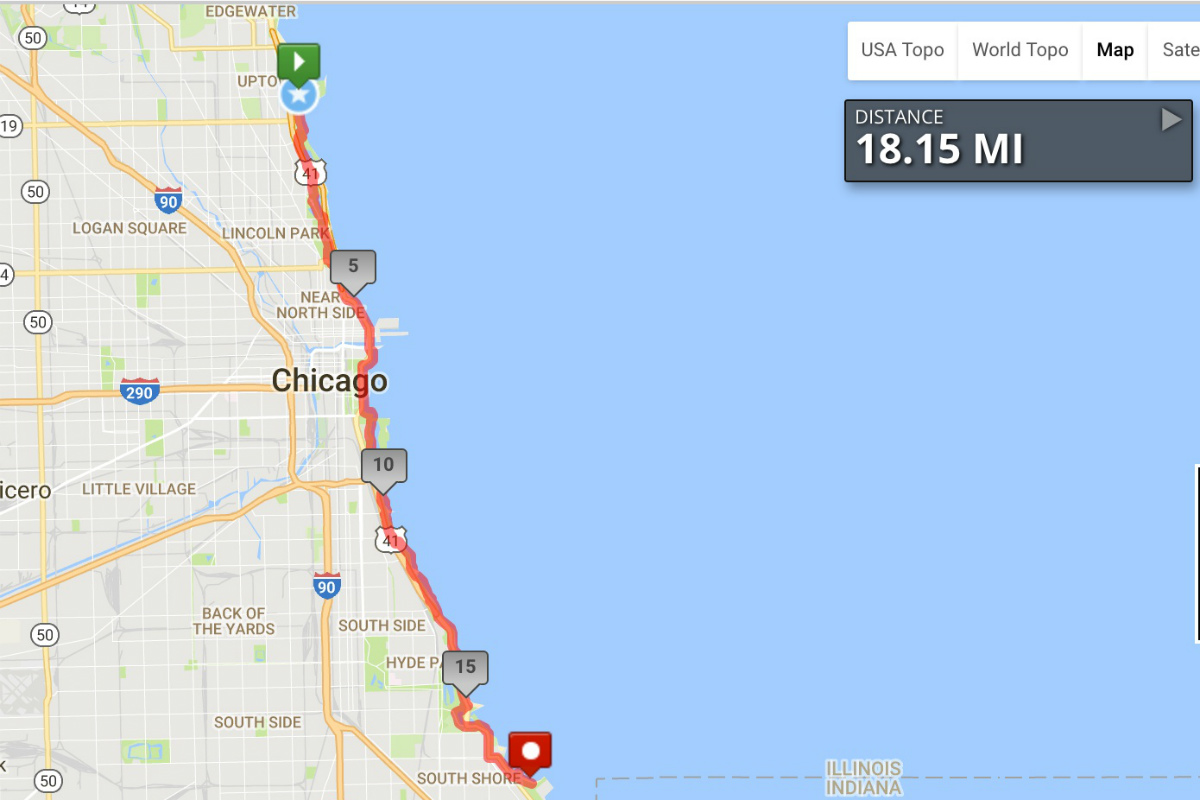 FOR THE TOURIST: Lakefront Trail

The beautiful and flat path (yay) winds 18 miles along Lake Michigan, beginning at Osterman Beach and ending at the South Shore Cultural Center. Miles of continuous trail make up one of the best running paths in Chicago, winding past Navy Pier, Grant Park, Soldier Field, and the museum campuses. Be sure to hit the path early, as heat and humidity can make afternoon runs dangerous in the summer months.

Where: Head to Montrose Harbor north of downtown — the route will cut along half of Lakefront Trail's most vibrant stretch. Start with a stretch while viewing Lake Michigan's magnificent turquoise water and the local bird sanctuary. The famous Chicago skyline is to the south. The only company you'll have are the fishermen who dot the area's shores. Run south for two miles and you'll stumble upon a free Gatorade and hydration station sponsored by a local sports company (open every Saturday morning during race training season). Other stops include the Oak Street Beach, the perfect place for a quick dunk on a hot day, Buckhingham Fountain, and the Shedd Aquarium, one of the city's best spots for a photo of the skyline.
Length: 7.5 miles
When to go: Early morning to avoid the heat, or in the evening for spectacular views of the sunset behind the city skyline.
Good to know: On weekends, hydration stations dot the entire 18-mile stretch of running path. Water fountains are also plentiful at Buckingham Fountain.
What you'll see: A flat plane of turquoise water stretching to the horizon and tiny beaches along Chicago's shoreline. Tourists might also recognize the Lincoln Park Zoo, the Bean, Northerly Island and museums, like the Museum of Science and Industry.
Route map: See here. 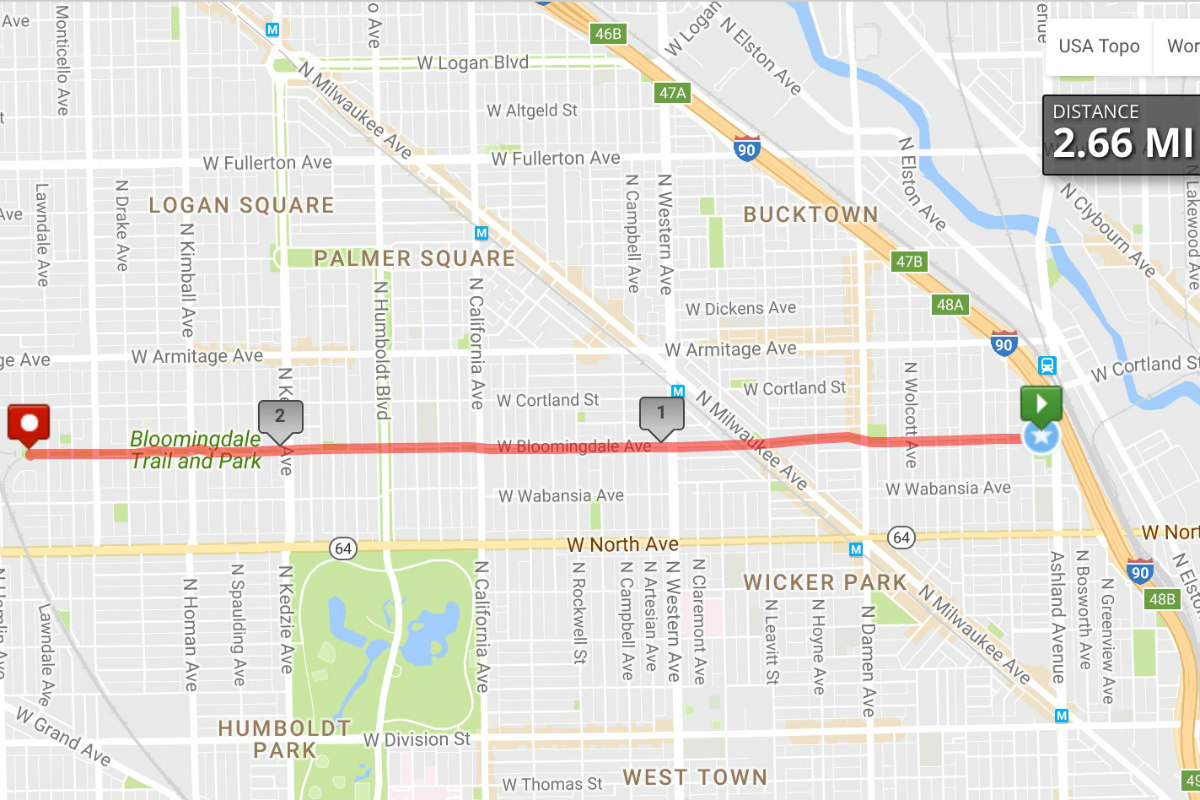 Lakefront Trail is one of Chicago's most traditional running paths, but there are equally impressive trails far from Lake Michigan's shores. The 606, named for the zip code including Bucktown, Humboldt Park, Wicker Park, and Logan Square, opened last summer with rave reviews. Costing $95 million, the trail took nearly 20 years to plan and build. The 2.7-mile path is ideal for novice runners and architecture snobs (the elevated trail bypasses many historic buildings). Built on the old Bloomington rail line, it slices through the city's northwest side, stretching from from Ashland Avenue to Ridgeway Avenue.

Where: Start At Walsh Park, near the Clybourn metro station, and run west.
Length: 2.7 miles.
When to go: The path is open from 6 a.m. to 11 p.m. daily – stick to the hours and don't risk getting a trespassing ticket.
Good to know: Because the trail is elevated, there are specific points of access. Of the 12 entrances, four are located at ground level. Start at Churchill Park, 1825 N. Damen Ave; Julia de Burgos, 1805 N. Albany Ave; Walsh Park, 1722 N. Ashland Ave; or Park 567, 1805 N. Milwaukee.
What you'll see: The Damon Arts Plaza features art and sculptures by local artists, while the Sumac Tunnel is meant to be a "living installation" simulating the passing of time. Landscape architect Matthew Urbanski planted hundreds of sumac saplings, which eventually will grow to cover the trail completely. Stop to smell the roses – literally – at Julia de Borgos Park, a romantic green space that includes a poetry garden. Take a detour off the 606 for a slice of pizza at Dante's and a beer at Best Intentions. Finish at the observatory.
Route map: See here. 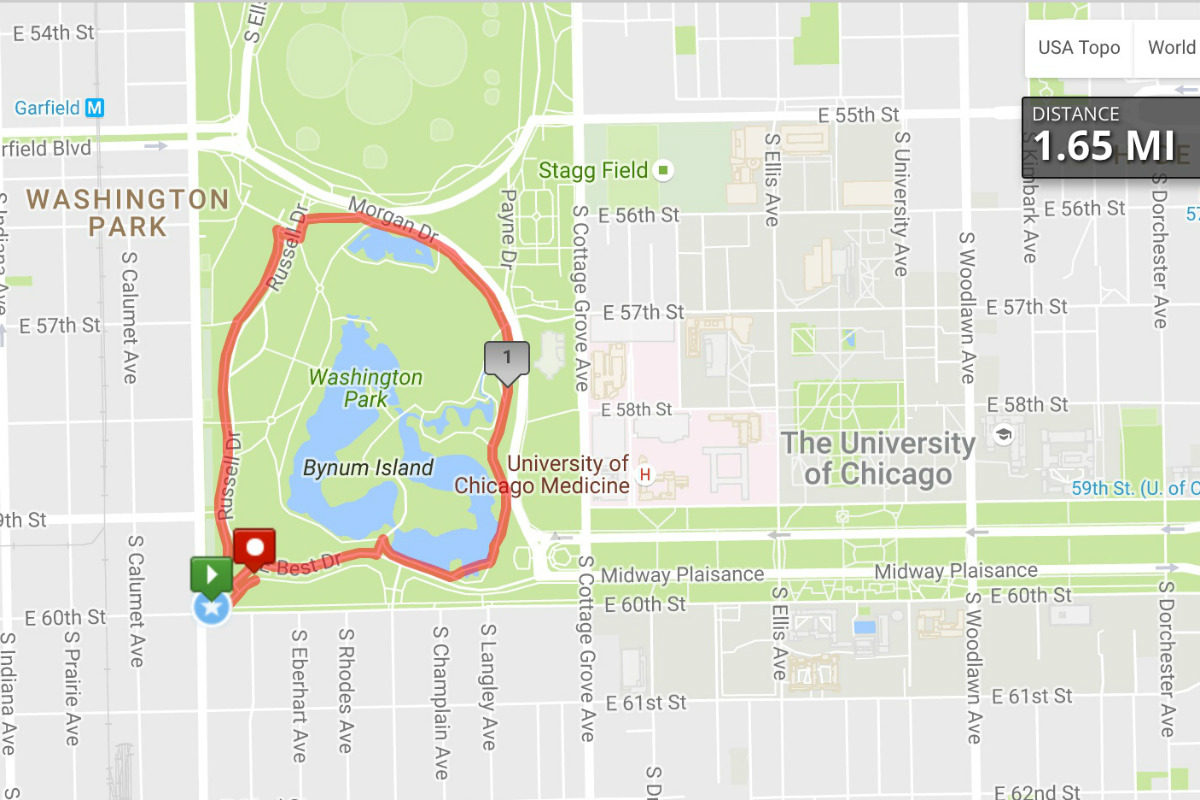 FOR THE HISTORIAN: Washington Park

Bordering the University of Chicago, the 372-acre park is crisscrossed by running and walking trails. It connects to the Midway Plaisance park in the south, meaning enthusiasts can extend their runs an extra mile. But true historians will appreciate the space for its origins: It was used in 1893 for the World Columbian Exposition and considered a site for President Barack Obama's presidential museum. Detours across the university's ivy-covered campus are also an educational addition.

Where: Washington Park is in the Woodlawn neighborhood area, located about five miles south of the Loop. Hotels and restaurants are scarce. Come for a sense of calm and peace, or to satiate the inner historian.
Length: Most runs can be finished in under two miles.
When to go: Autumn transforms the park into a kaleidoscope of reds, oranges, greens and browns.
Good to know: Add the University of Chicago campus and Midway Plaisance park to your route for a longer run.
What you'll see: University buildings, stables from the former race track, the DuSable Museum of African-American History and an expansive sculpture garden.
Route map: See here.

San Antonio on the Run
Six Great Running Routes in NYC
Chicago, One Neighborhood at a Time