NEW YORK – We swear we're not biased, but Fathom husband Ben Schott has published a new book, Schottenfreude: German Words for the Human Condition, and it's awesome. In this funny and beautifully designed volume, Schott identifies human conditions that everyone experiences but no one has named, and gives them names — in German — as well as historic, literary, and philosophical footnotes. For example:

Since he is pretty close to us (he's married to founder and CEO Pavia Rosati), we know a few things about him.

1. He's not German; he's English. (Both grandfathers were German.)

2. He doesn't really speak German. He defined the concepts and found the references, then collaborated with a family friend, German mathematician Dr. Oscar Bandtlow, on the translations.

3. He has published several books in German. Schottenfreude, which has already been translated into German, is his eighth. (It's also being published in the UK and Australia and Italy next year.)

Why German? Because it a uniquely compoundable language. That is, you can make up new words by stringing other words together, and those new words make total sense to German in a way that "Airportgreetingjoy" wouldn't work in English. That's one of the words: "Flughafenbegrükungsfreude," which describes "childish delight at being greeted at the airport."

(Plus, everything German is kinda funny. Please see photo above.)

And Now For a Little German-y Movie

The entries run the gamut from frivolous to serious, and many cover experiences we've had on our travels:

Toying with the (non-suicidal) idea of jumping from a height.
Abyss-Abstraction
Felt on mountaintops, bridges, skyscrapers, observation decks, terraces...

Coveting thy neighbor's restaurant order.
Meal-Envy
Nothing is worse than ordering wrong the only time you're at a foreign restaurant. 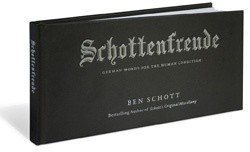