Who said Southeast Asian spas have to be fancy and expensive to be good? Londoner Susie Walton found a low-frills Thai spa that was so good, she went twice. And she's planning to go back for more.

KOH SAMUI, Thailand – I recently went back to The Spa Resorts in Samui, a no-frills but really effective spa on Koh Samui Island in Thailand for the cleanse program. I don't typically like to go back to the same place twice, but Spa Samui might be a new exception (along with Paris and New York).

The first time I went was with a friend at the end of the year to get ahead of the curve on Detox January — to regroup, restore, and replenish my mind, body, soul, and particularly my heart, given my on-off status with my Love.

I had no idea what to expect the first time, so I was glad to be with a friend (especially to commiserate about the cleanse and all the, er, oddities that go along with it). But I had zero problems going back on my own for the yoga sala, the tea ceremonies, the peaceful setting, the lovely staff, and the gloriously inexpensive daily massages. In fact, I'm planning to go back again this winter. A week at Spa Samui is a terrific way to end the year and start a new one.

The Spa Resorts in Samui has two locations, Beach Resort and Mountain Retreat (aka the Village). A shuttle bus runs between the two, so guests can take advantage of both atmospheres. That means spending the morning in the yoga sala at the Village doing meditation, yoga, and chi gong, then spending the afternoon at the beach. Or starting with a morning dip in The Village pool and afternoon massage at the beach. Or vice versa. 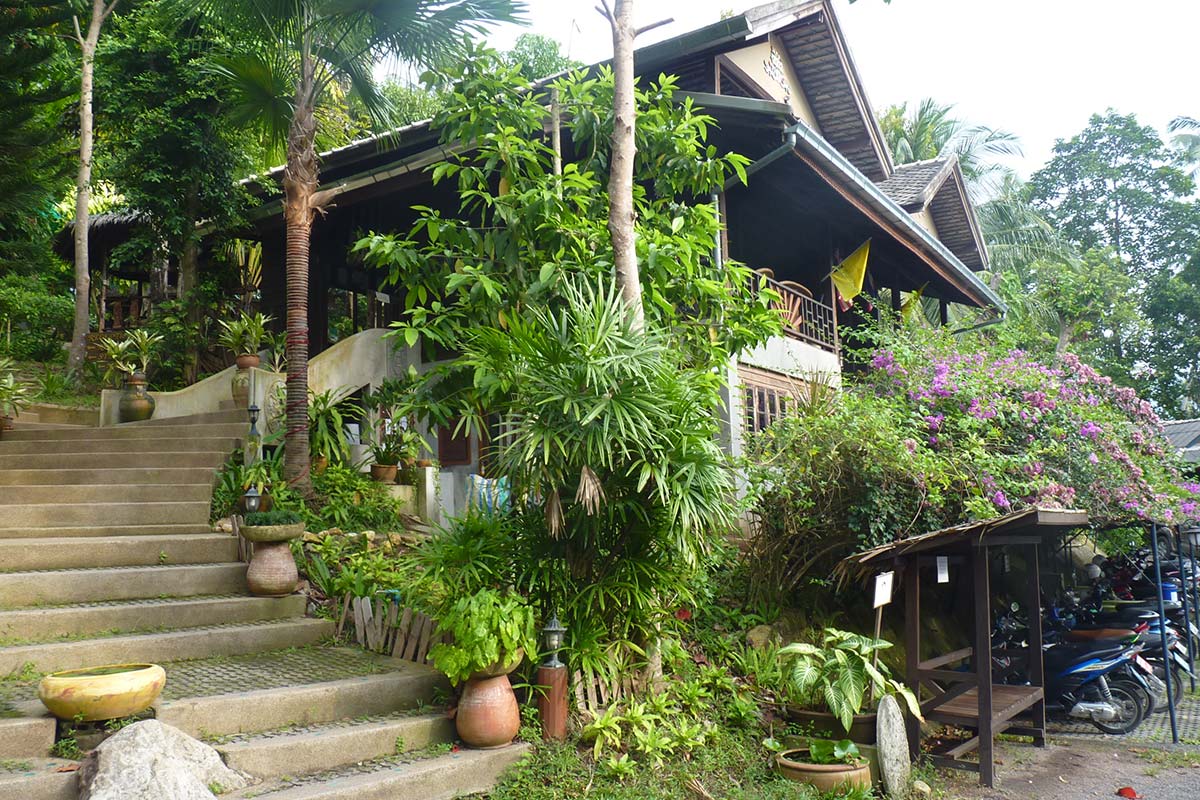 The entrance at Spa Samui.

I like to stay at the Village. It's a bit more Zen and quieter in the hills. Beach Resort is more social and seems noisy by comparison. Lazy tip: Some rooms in The Village are located up steep hills, and if you're doing a cleanse program and have low energy, the hills will be the last thing you want to deal with at the end of the day. If that's the case, you should stay in one of the bungalows nearer to the main reception building. And if, once you get there, you decide you'd rather stay in a different location, it's usually not a problem to switch.

If I haven't already made it clear, Spa Samui is a no-frills set-up, the cheap and cheerful alternative to the fancier and more popular Thai spas and resorts (Kamalaya Koh Samui, Four Seasons Resort Koh Samui, and Chiva-Som).

Spa Samui attracts a real mix, though primarily budget-conscious Brits, Aussies, Euros, and expats living in Asia. There are not many Americans. It's a very restorative environment. I was surrounded by like-minded people.

Both locations have massage salas offering various treatments. But this is no Western spa with private rooms: Everyone lies side by side with his/her dedicated masseuse. Considering that a Thai massage costs only 450 Baht (roughly £8.50 GPB or $13 USD), I had no problem justifying daily treatments. Sometimes I just had to have two massages per day.

The back, neck, shoulder, and stomach massage should come with a warning: Thai Tiger Balm takes a little getting used but ultimately feels really good. Ampuku is a 30-minute abdominal massage that facilitates elimination, which is particularly good (which is to say, er, helpful) if you're doing a cleanse. The optimal time to schedule an Ampuku treatment is 30 minutes after a detox drink and before your morning or afternoon colon cleansing. You can get a seven-day ampuku series to complement a seven-day cleanse. Ampuku can be done alone or in combination with a massage or spa service. (I liked the one-hour Thai massage plus 30-min Ampuku combo), but note that the full two-hour traditional Thai massage automatically includes Ampuku.

Another great tip is to get a professionally administered hydro-colonic on the last day of your cleanse (or a day or so after). I worked with Chalong, a great guy at Magic Hands Healing nearby. 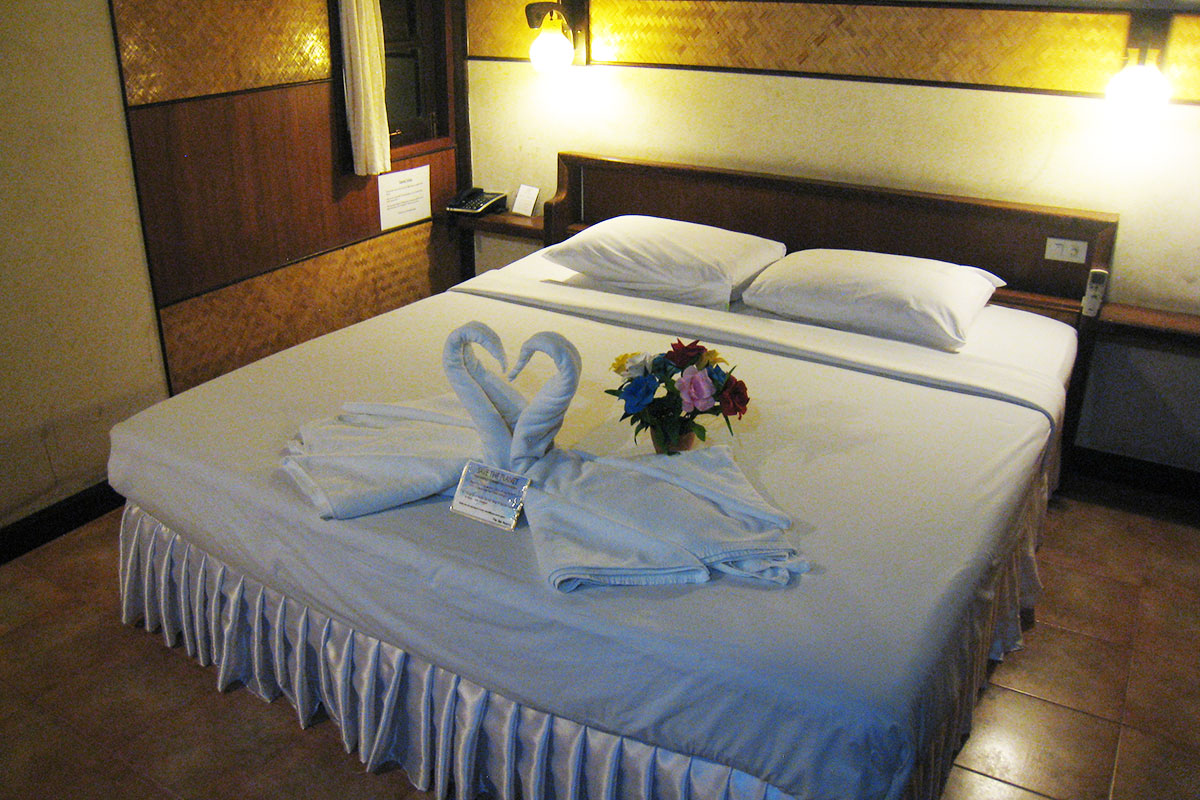 My bedroom at the spa.

How did you end up here in the first place?

An Australian friend who I'd known in London moved back to Sydney and we needed a meet-in-the-middle destination. (LHR-BKK is a 12-hour flight; SYD-BKK is about ten.) My friend knew about Spa Samui, and we both wanted to try a cleanse.

What did you do all day?

When you're doing the cleanse, there's not a lot of time for adventuring. But the second time I went, I booked my trip last-minute and didn't have time to prepare properly — you're supposed to be meat-, sugar-, caffeine-, alcohol-, and carb-free for at least two weeks — so I spent the first three days (while only eating fruit and veg) cruising around, exploring the island in a rented jeep.

Then I did six-and-a-half days on the cleanse. I ended a half-day early because I wanted a break before flying back to London. I could have easily used another two or three days at the end to chill and start eating properly again. The resort restaurants prepare amazing raw food and vegetarian dishes, and I did not get to take full advantage of them.

Stumbling upon the Buddhist Temple at Hin Lad.

The very touristy Safari Park at Namuang Waterfalls 2. The waterfall wasn't too bad, but the safari park and elephant trek were pretty depressing. 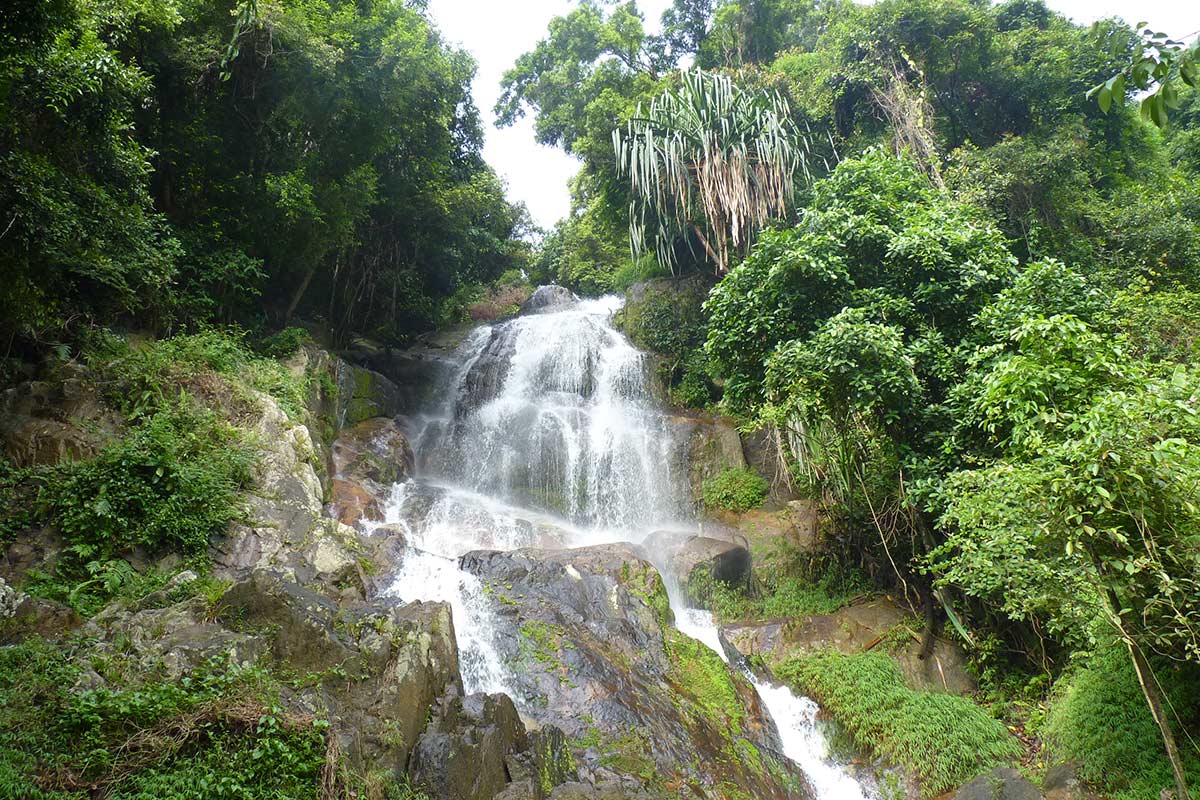 This is one of the reasons you come to Thailand.

One place you didn't get to visit, but wanted to?

Lipa Noi Beach. Ko Tao would have also been a nice day trip, but I ran out of days.

What do you wish you had packed?

What did you pack but never used?

Too many yoga pants and T-shirts.

What did you bring back?

A sarong, a little buddha-head figurine, and meditation CDs.

The geckos that linger in the bungalow roofs. The men "walking" their water buffalo.

Daily Thai massages, morning meditation, and the peaceful view of coconut trees from the yoga sala.

What was your Kodak moment?

I was blessed by a monk. A highly personal and very special moment. I cherish the photo, but out of respect to him, I wouldn't share (though it serves as a lovely screensaver and daily reminder). Here are more Kodak moments:

When departing from Koh Samui airport, you can check your bags straight through to an international destination even if you're on different carriers for your domestic and international flights. (This helps save transfer time at Bangkok airport.)

You can pre-book an airport transfer to/from the Spa Village for 500 baht (approximately 10 GBP). This is easier than trying to arrange transportation upon arrival.

There's a laundry service located directly across the street from the Spa Beach location. I took advantage of this before leaving, which meant I didn't have to pack two weeks' worth of stinky clothes for my 14-hour journey back to London. Made unpacking on the other end super easy, too. (Allow at least 24 hours from drop-off to pick-up.)

Pre-order a vegan or fruitarian meal for the flight back so your whole cleanse doesn't go out the window with one lousy bread roll.