Ali Rickards is a doyenne of the Tracy Anderson fitness empire. But it’s not all taut abs and leg lifts for her: We sent her on assignment to Montreal for the Stella Artois beer competition. Hey, it's a tough job, but someone's got to drink it. And as we enter spring break season, we pause to remind our readers that traveling for the beer can, in fact, be a noble pursuit.

MONTREAL – Beermaker Stella Artois hosts an annual Draught Master Championship, a search for the best beer pourer in the world. A few month ago, 21 finalists met in Montreal for an extensive, head-to-head competition to crown Stella Artois’ 9-Step Pouring Ritual World Champion, and Fathom sent me along for the ride. The ritual steps include purification, sacrifice, beheading, judgment, and bestowal, but not my favorite: tasting.

From room keys and elevator doors to the Stella Artois lounge, the Stella was practically flowing from the faucets at Le Westin in Old Montreal. Chilly weather set the tone for the amazing, Stella-tastic event. They may hate the Queen, but the Quebecois love their beer, and Montreal's ability to meld French, Canadian, and American influences made it a fitting host for a Belgian brew competition. 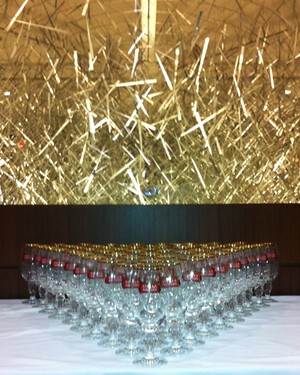 To be clear, this is not your lederhosen-clad Okoberfest. This is Stella Artois, the only beer I can think of that has both a first and last name, a cultivated elegance, and a mythology built around being served in a chalice — never a glass. The event dress code called for "Stella Artois Sophisticated." (What is a girl to wear!?) Competitors from around the world beat out countless pourers to win a spot representing their country, which included South Africa, Singapore, Argentina, and Australia, but not the favorite, China, which had visa issues and had to miss the event.

Arriving late the night before the competition, I peeked inside the Stella Lounge and saw rows and rows of chalices and a practice station, where contestants perfected their pours in action. I had already heard a lot about United States champion Chris Myers and his signature behind-the-back throw and catch.

At 10 a.m., there was a knock at my door. A Stella Artois delivery! What a bounty, greeting the day with Stella staples and a pair of snazzy cufflinks, which I painstakingly (and unsuccessfully) tried to turn into clip-on earrings to wear to the competition. 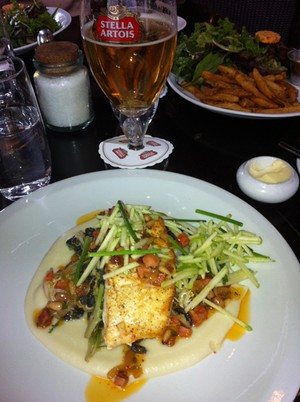 Off to lunch at Le Locale with fellow food and wine journalists, where I learned more about beer than I ever thought possible. We were served Stella chalices as big as my head, the biggest I would see all day. I quickly learned that Stella pairs well with just about any food.

I got the scoop on the crowd favorites: the feisty Irish pourer, the Bulgarian who had to drive to Romania to get his visa after completing a 20-page application, and the hometown favorite, the Montrealer representing Canada. Four of the competitors are women, and the majority aren't even bartenders. (The 2011 winner is a web designer.) Dessert was a tray of maple ice cream pops, maple butter-smothered treats, and other maple deliciousness. Glad to see that Canada is no longer feeling the pinch of the great maple syrup heist of 2012.

Back to Le Westin for a quick change. Someone told me that in years past, the dress code was always 1960s mod, so I adopted that into my blogger-chic look. 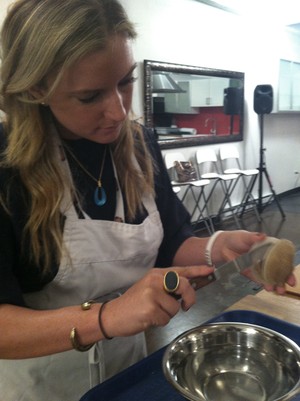 Dinner was at Le Guide Culinare, an impressive culinary school under the watchful eye of chef Jonathan Garnier, one of the evening’s judges. The store at Le Guide had the most impressive collection of Staub servingware (my personal favorite) I have ever seen, as well as a meticulously curated selection of cookbooks. I will definitely go back, next time with a bag larger than an evening clutch. Side note: What was it about the prep kitchen that totally reminded me of the set of Friends?

We started cocktail hour with a delicious Hoegarden specialty that I will be recreating for friends in the future:

Then it was into the kitchen for a tutorial. I volunteered immediately to shuck the scallops for the first course. I'll sing for my supper any day; just throw me an apron. 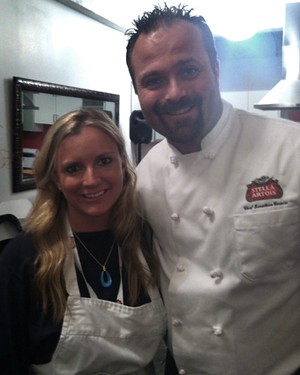 I had been warned that chef Garnier was the Gordon Ramsey of Canada, but I saw nothing but a teddy bear leading a spot-on tutorial. Although I will say that his chef de cuisine accused me of being a spy when he saw that my last name was Rickards, which happens to be a huge beer competitor in Canada.

No relation, buddy. Back away from my mollusks.

The meal consisted of traditional Quebecois dishes paired with Belgian beer, each with  its own glass. I would expect nothing less for a pork belly cooked for eleven hours. The traditional Belgian cookie, speculous belge, served with Stella ice cream was my favorite course by far.

The three stages were nestled inside the gorgeous Chalet Mont Royal in a dark room where chiseled squirrels atop traditional buttresses were offset by the sleek modernity of Stella Artios' red/black/gold decor.

I had heard that in order to get your Stella chalice engraved, you had to complete the 9-step pour. I also overheard that if you added some flare, you could get TWO coupons for engraving. Challenge accepted. I mean, I had been practicing my pour all day! 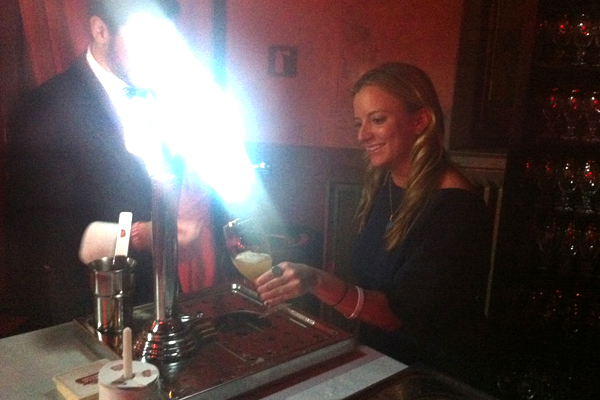 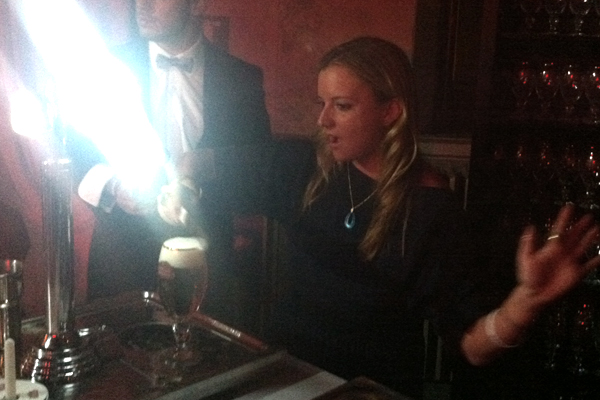 A mix between the Olympics and a wrestling match, the beer games were set to a jazz tune that kept the competitors on their toes while they completed their pours. I say "Olympics" because the official language was French and the Belgian ambassador presided over the ceremonies. I say "wrestling match" because each competitor was escorted by two Stella Girls.

The judging criteria included the actual pour, the presentation on the coaster (keep it centered, people), and a variety of other elements. I kept tabs on one judge who seemed to be giving a lot of points for eye contact. 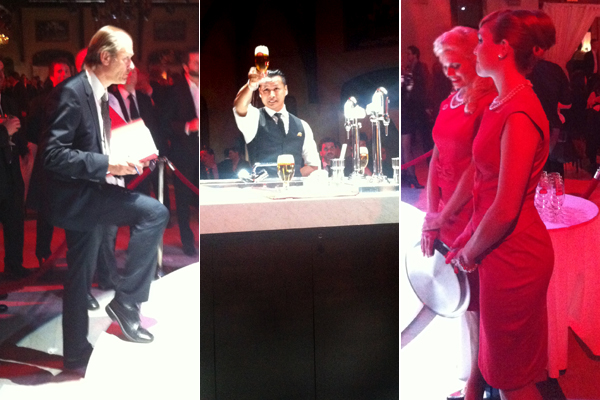 The judge, the competitor, the Stella girls.

Last year's winner endured a silver catastrophe: a trophy stuck for months in Argentine customs. I'm a sucker for supporting local artisans (aren't we all…), but I was rooting for the Montreal-produced glass swirl to make it home to the crowned winner without a hitch. 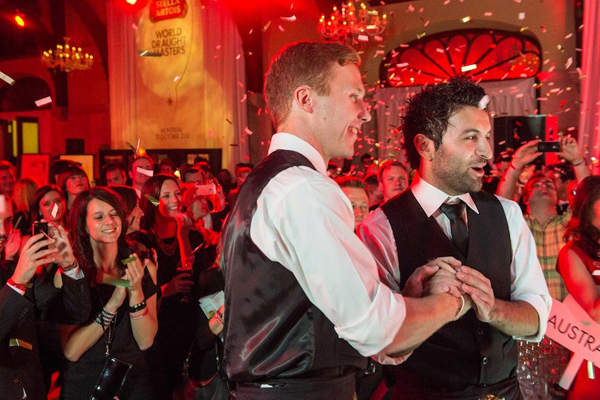 All hail the victor. Photo courtesy of Stella Artois.

Congratulations Allaine Schaiko of Belgium! If it couldn't be the cute Canadian, I was rooting for the Belgian to take the title. Almost improbably, his hometown is actually Leuven, which is also home to Stella Artois. Very fitting, and he no doubt got extra points for his armband enthusiasm.

Stella Artois is a formally named beer that should be poured perfectly into its chalice and enjoyed frequently with any kind of food. And although I have never been, I now suspect that Belgium may be the country for me, as it is known for the best of all of my favorite things: fries, beer, diamonds, and chocolate. In that order.

Do You Have What It Takes to Be a Draught Master?

Feeling inspired? Draught Master finalists first have to win their home country's title, so start practicing your pour. Stella Artois hasn't yet announced the location for the 2013 championships, but you can check for the latest information on their website.