So, what brought you to Tahiti and Mo'orea?

What was the best tip you got before you left?

Well, the first and best tip was to go. Tom Werney of Earth Missions, our adventure sports travel company partner, loves Tahiti and suggested the destination. We're so glad he did.

Another great tip came from Shelly Strazis, one of our photographers. She has spent a ton of time in Tahiti and connected us with a boat that takes groups out on sailing charters. As a result, we went out to Tetiaroa — which made for some incredible shooting.

How did you get there?

Our team flew in from all over: New York, Paris, Santa Fe, Oakland, Los Angeles, Hawaii, and Perth. It's actually relatively straightforward (if long) to get to Tahiti via Los Angeles. I flew from San Francisco to Los Angeles, where I met up with most of our group. Then we flew on a nonstop overnight flight to Papeete. Tom and James from Earth Missions picked us up at the airport with leis, vans, ferry tickets, and huge grins and took us to a local market for coffee before the morning ferry to Mo'orea. The ferry ride takes about an hour, and I had the best fish and chips of my life. Then we drove fifteen minutes to our over-water bungalows that were super cool and funky. 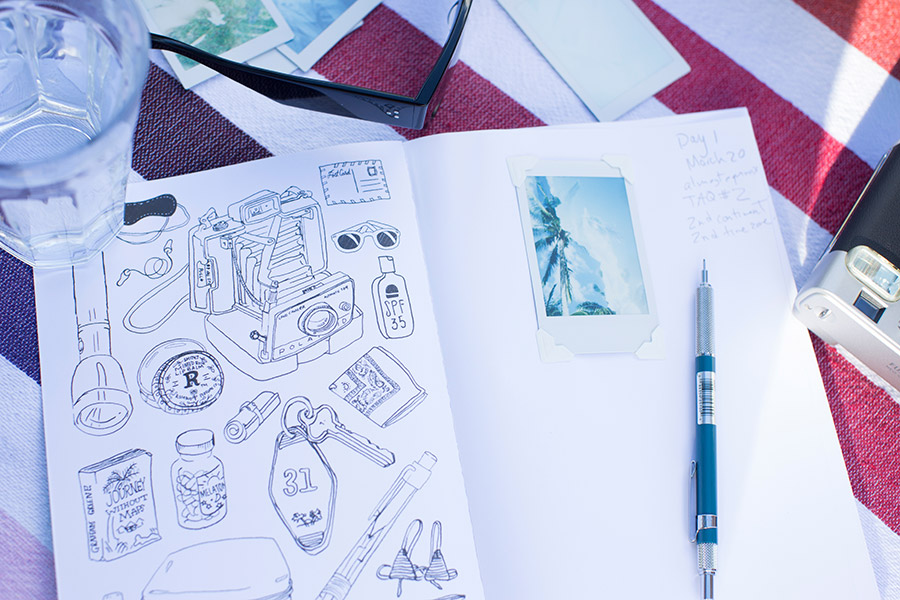 A notebook created by AllSwell and Tiny Atlas Quarterly. Photo by Emily Nathan. 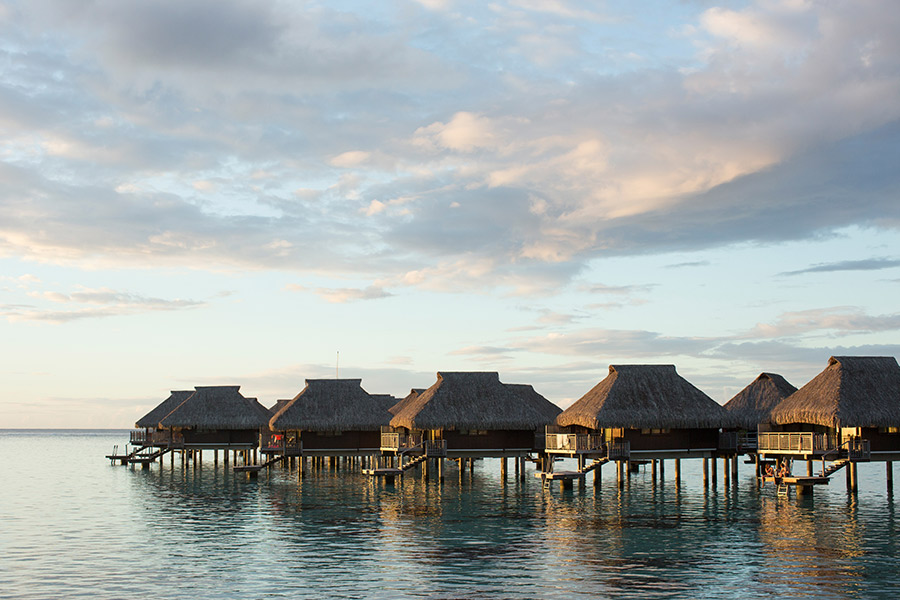 We went to Mo'orea first for two and a half days. We purposely relaxed on day one after the big trip and planned sunset drinks on a long dock so our drone-flying photographers could get a nice view of the stunning mountain ranges that Mo'orea is famous for. We had our first Allswell Creative workshop early in the trip with Fuji Instax, which was a nice analog way to start collaborating.

We headed out on a speedboat for a tour around the island. We swam with lemon sharks and sting-rays and donned snorkels to follow our boat captain's mermaid wife through the reef into open ocean. It was pouring before we arrived, but the weather was incredible by the time we got to shooting and adventuring. We stopped by Hilton Mo'orea Lagoon Resort & Spa for a lovely long lunch. Everything on Mo'orea is much smaller than you would imagine, and even a big-name resort felt intimate and sweet.

After returning to Tahiti, we traveled to the literal end of the road in Teahupo'o, which is a famous surf destination. The paved road stops at a small parking lot, and you have two choices: You can walk across a bridge, over a river mouth, and along a dirt path through a local neighborhood to get to the far point of the island (where we were staying). Or you can drive in a truck that is big enough to ford the river. For our initial arrival with our luggage, we went with option number two, choosing to sit in the back of the truck bed. There are no hotels per se, but because we partnered with Earth Missions, we had the pleasure of staying directly on the point in small rental bungalows owned by local families who operate the boats that take pro surfers out to the wave breaks on the reef. (Tahiti is not like Hawaii in this regard. Most of the surf is located offshore on the reefs that surround the island rather than closer to the beach.) For sunrise and sunset we were on the boat, out to shoot the surf, or on an adventure up a fresh river.

On our last day we slowed back down, created our crazy "family photo," and were taken through a moving Allswell creative writing workshop, which helped us process all we'd seen and done. 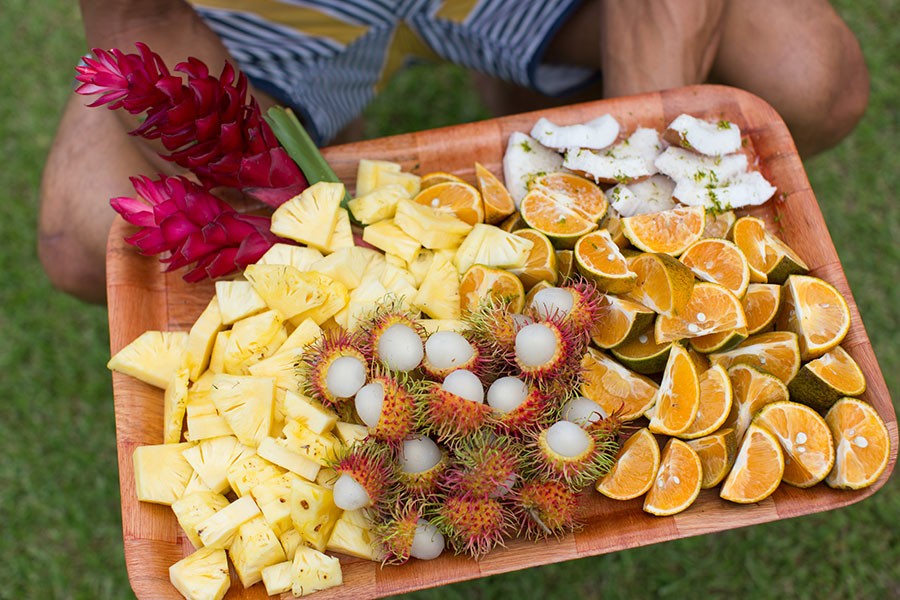 A platter of fresh tropical fruit. Photo by Emily Nathan. 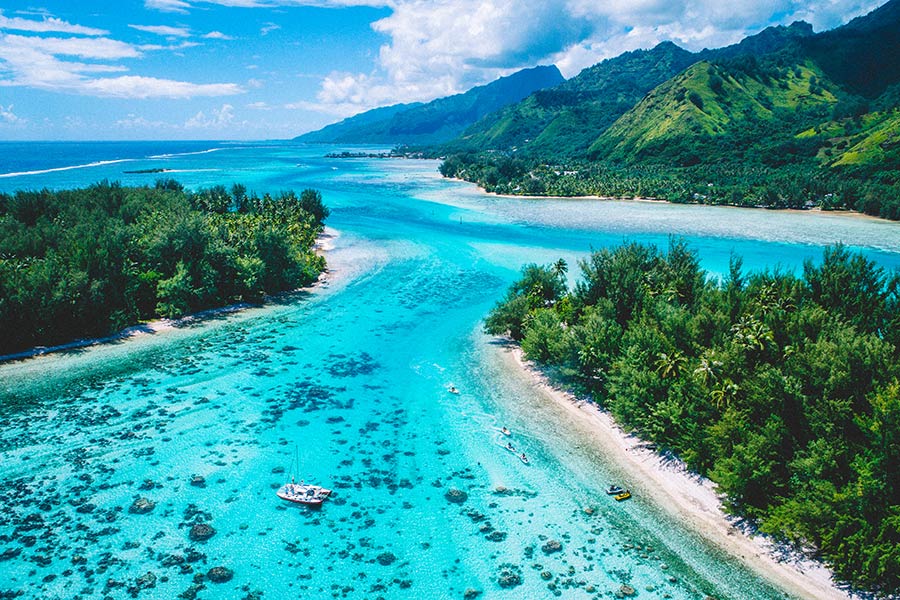 An overhead shot of Mo'orea. Photo by Salty Wings.

What did you know by the last day that you wish you had known on the first?

That it would not rain until all of our guests were gone.

The Tahitian people were so warm, friendly, and welcoming. We were also super fortunate to connect with Captain Liz Clark, a friend of Laura Rubin, the founder of AllSwell, who is an environmental activist living in Tahiti. We were so inspired by her message that we're working on a benefit photo show and auction with her.

Tahiti is far away. I fell in love, but it will be hard to get back there. 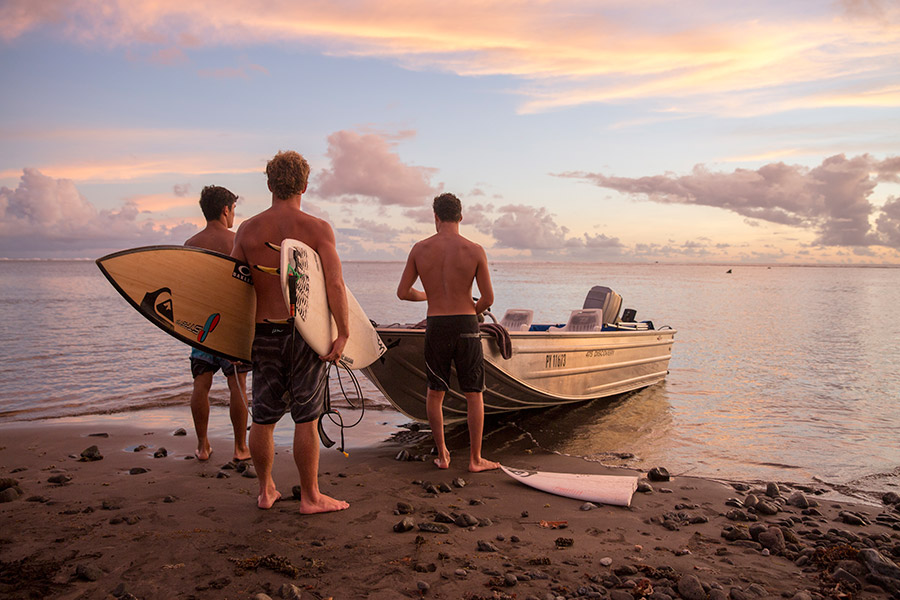 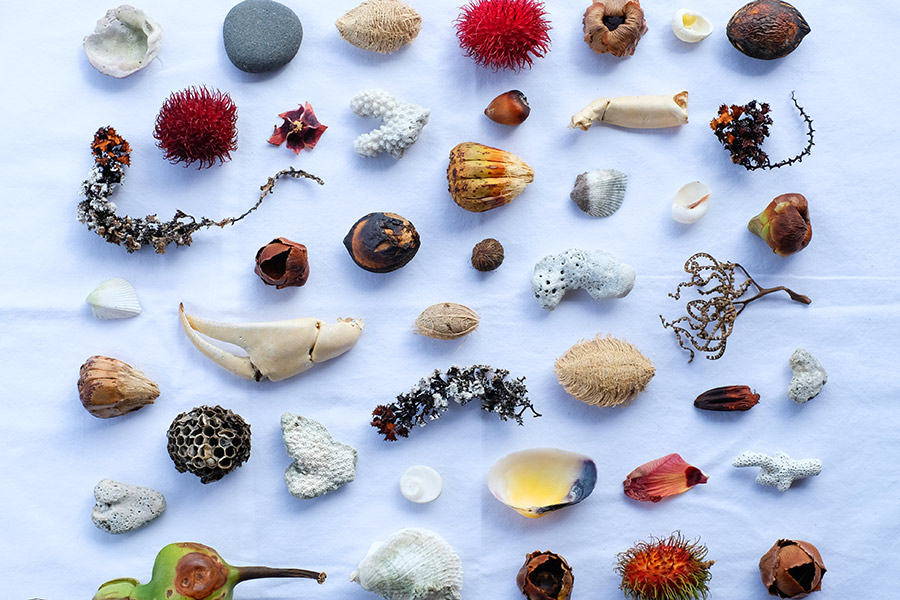 This was touristy and worth it:

We took an astonishingly pristine day trip to Tetiaroa, departing from the island's main harbor in Papeete, with Poe Charter.

Surfing and black pearls. There are also some really out-of-this-world leis and lei makers on Tahiti. Wearing fresh flowers isn't a touristy affectation. It's part of the local culture on a daily basis. I wish I had at least photographed more of them. I also wish I had taken a couple days to head to the sustainable pearl farm in Ahe for Kamoka Pearls. 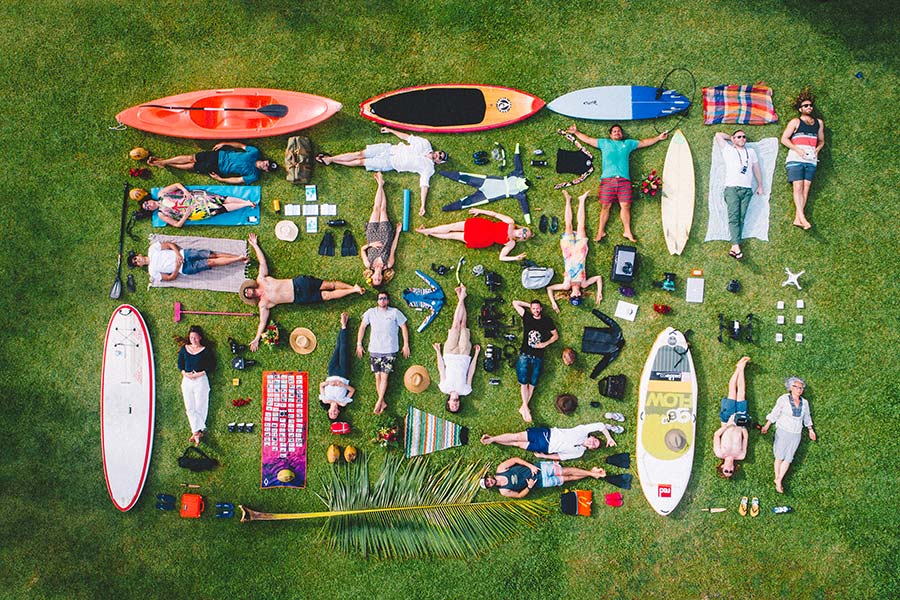 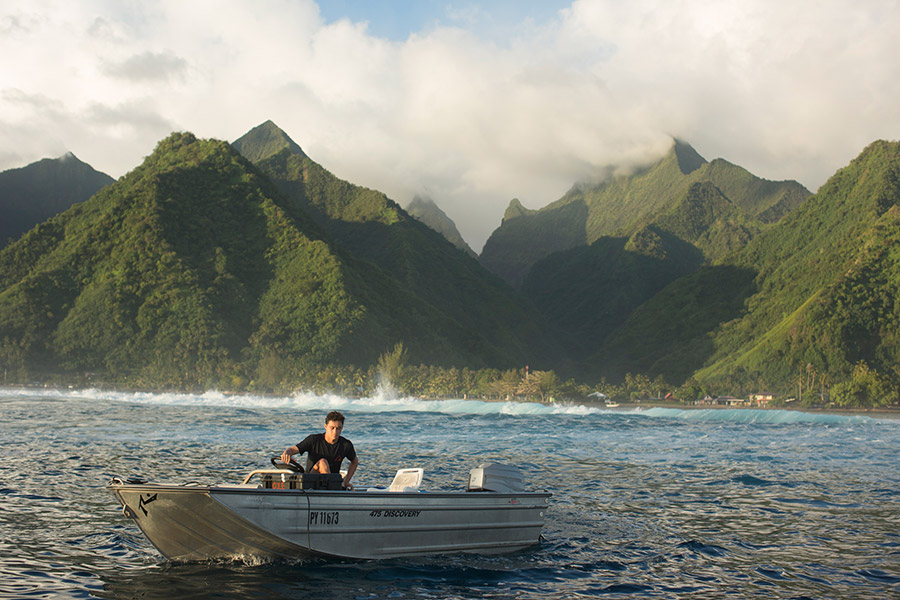 A typical ride in French Polynesia. Photo by Emily Nathan.

1. Meal: Most meals were cooked by Mychael Henry, who we brought as a chef. But we did have an incredible, breezy, open-air lunch at an epic French/Tahitian restaurant right on the water outside Teahupoo called La Plage de Maui (PK 6, South Coastal Rd., Vairoa).
2. Neighborhood to explore: Papeete gets a bad reputation with tourists for not being pretty, but we really enjoyed walking in the local market and around the chill, small city. It felt kind of like a not-famous town in the South of France or Sicily.
3. Thing you did: Shooting world class surfers at Teahupoo from a boat in the channel.

One place you didn't get to visit, but wanted to:

Ahe and more of the atolls and other islands. There's a lot more I'd like to see on Tahiti. 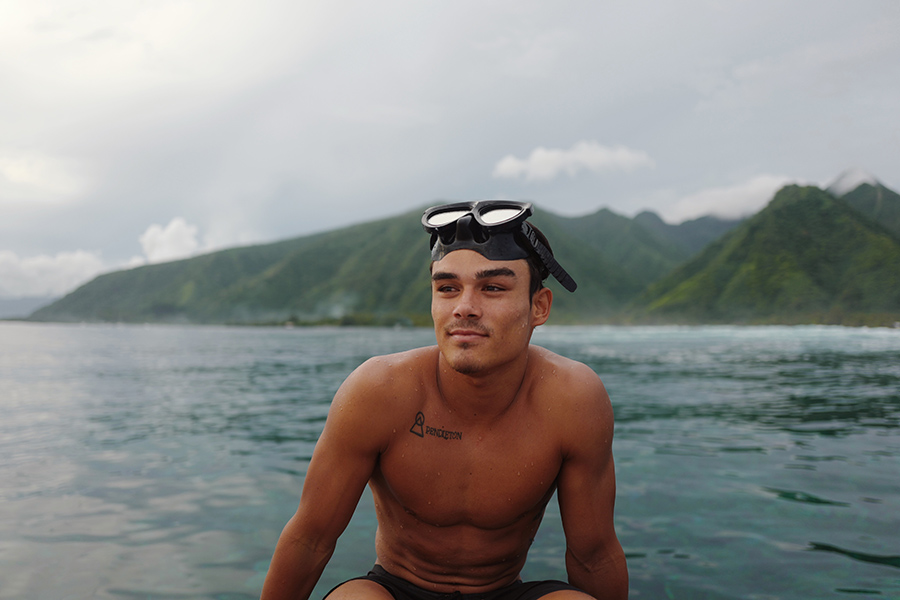 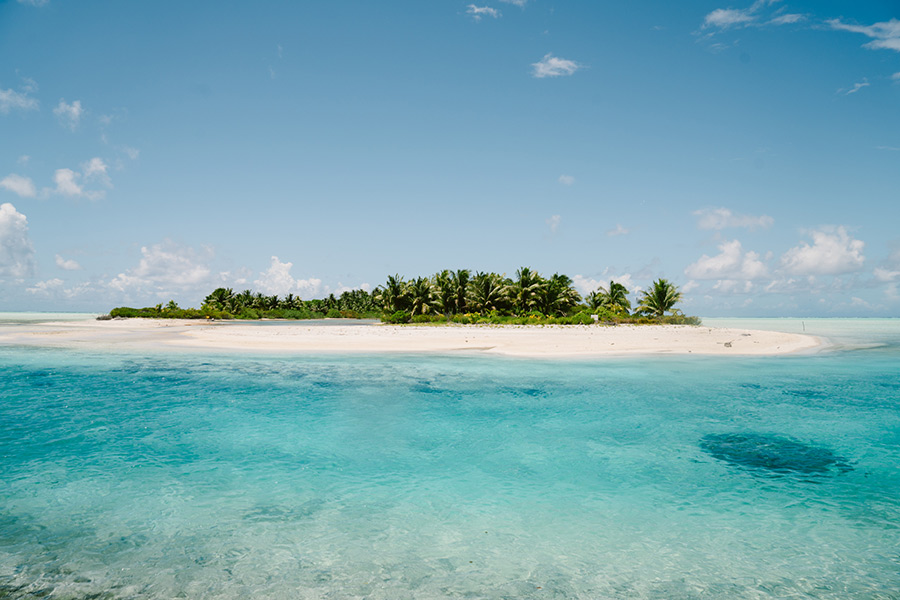 Tahiti at its best. Photo by Dan Tom.

The surfers were super welcoming to our non-local crew. The surf is so extreme in Tahiti that you have to be close to being an expert-level surfer. For example, since I'm not comfortable on shallow reef barrels, I didn't ever surf there — even though I do so pretty regularly back home in California.

The whole group we traveled with. It was a really special crew of good humans and we had so much fun working and playing together. It was one of the best group dynamics I have ever experienced.

Um, the whole trip was one Instagrammable moment after another. But if I had to choose...the flat-lay family photo via drone is a favorite. 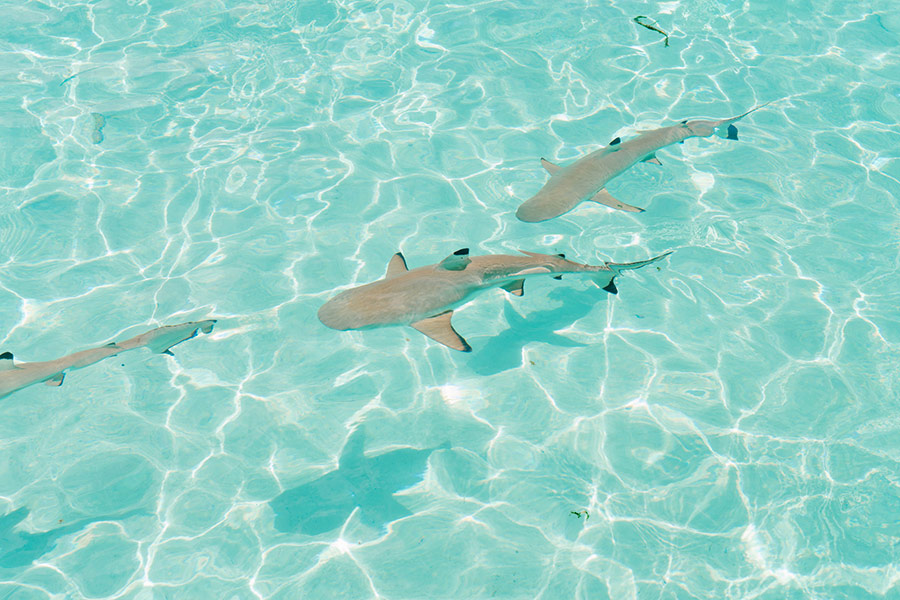 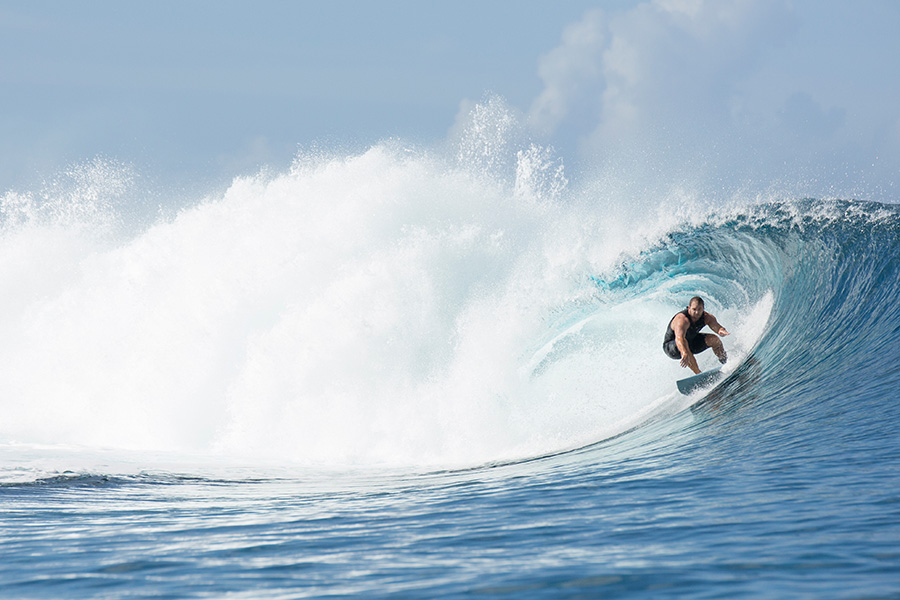 What's the #1 tip you'd give a friend who wanted to go?

Would you go back?

Sweet views and a few words about travel from the photographers on Emily's Tahiti trip.

Make a Break for It: Surf Tahiti With Sally Fitzgibbons
Front Row at the Polynesian Super Bowl
My Tropical Phoneymoon